Coronavirus US: New York to enter Phase 2 reopening on Monday

New York City is on track to enter Phase 2 of reopening on Monday, June 22, Governor Andrew Cuomo said at a press conference on Wednesday morning (pictured)

New York City is on track to enter Phase 2 of reopening on Monday, June 22, Governor Andrew Cuomo announced this morning.

Cuomo’s news came an hour after Mayor Bill de Blasio refused to commit to a date for the second phase, which will allow for outdoor dining at restaurants, in-store shopping, and the reopening of a wide range of businesses such as hair salons.

City and state officials have faced mounting pressure to accelerate the Big Apple’s reopening plan as COVID-19 figures have continued to fall.

But Cuomo and de Blasio have been cautious, warning that moving too quickly could cause numbers to surge, as has happened elsewhere in the country after lockdowns were lifted.

New York City currently has one of the lowest infection rates in the country, with just one percent of residents testing positive over a seven-day rolling period.

On Wednesday Cuomo announced that just 17 new daily deaths were reported across the state overnight.

That number stands in stark contrast to figures from just 10 weeks ago, when the state was losing nearly 800 people per day. 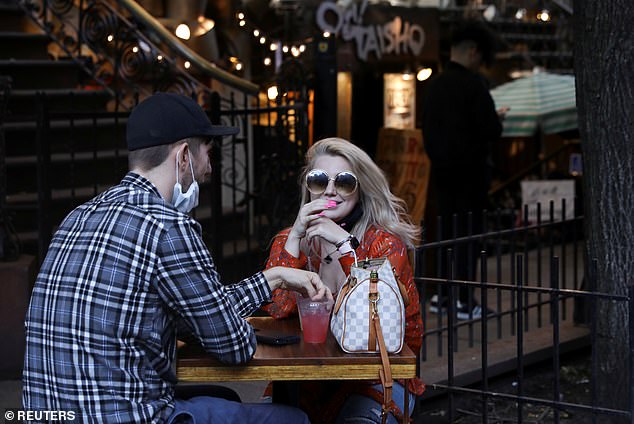 Phase 2 will allow for outdoor dining at restaurants, in-store shopping, and the reopening of a wide range of businesses such as hair salons. Pictured: A couple flouts lockdown rules by drinking cocktails outside a bar in the East Village on Saturday

The Big Apple entered the first phase of the reopening on June 8, marking the end of a grueling 11-week lockdown.

De Blasio has since warned that the city likely wouldn’t begin the more extensive second phase until early July, despite ongoing improvements in coronavirus figures and mounting pressure to get businesses back up and running. 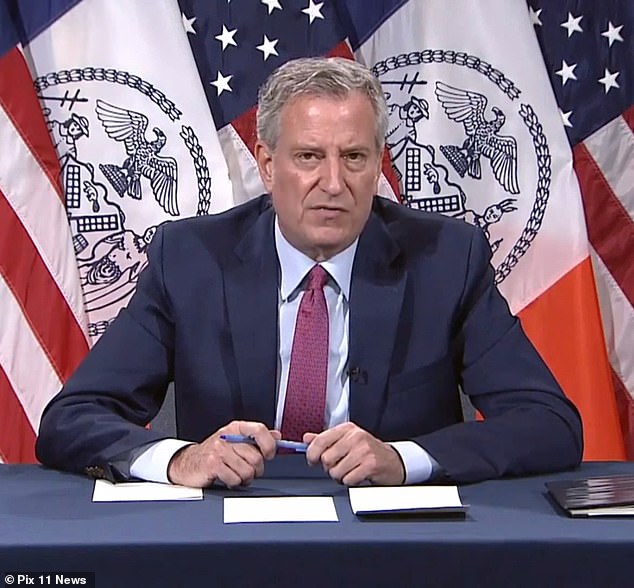 New York state has recorded a total of 385,142 coronavirus cases

Cuomo, on the other hand, feels the city is ready to move forward with the June 22 plan.

‘New York City will have been Phase 1 for 14 days. Look at all the numbers, all the numbers are good,’ the governor said at his press conference Wednesday.

Establishments that must remain closed:

He then cited successes in other parts of the state that were already given the green light to enter Phase 2.

Cuomo called on New York City residents to remain vigilant in their personal efforts to slow the spread of the virus by continuing to wear masks and practice social distancing.

‘Employers, storeowners, employees, individuals, local governments have to be responsible and do their job,’ he said.

At his own press conference an hour earlier, de Blasio cautioned that ‘it may take another week or so’ before the city could move into Phase II.

The mayor said that the timing would depend on monitoring the potential impact of the mass protests that have persisted throughout all five boroughs over the past three weeks.

‘We’re all mindful we had a very unique situation with the protests,’ de Blasio said, noting that New York City’s coronavirus situation was far more complex than anywhere else in the state even before the unrest.

De Blasio said he hopes coronavirus figures in the coming days will shed light on how the protests have affected community spread, given that the virus has a two-week incubation period.

He also cited the influx of hundreds of thousands of workers who returned to work in the city when Phase 1 went into effect.

‘If you’re judging by today’s numbers, we’re in great shape. And I’ve been impressed that they’ve been very steady now for many days,’ he said.

‘But what we’re looking for going into the weekend is do we see any variation there? I know the state’s concerned about that as well. So it’s a day to day discussion. We want to come to a decision with the state as quickly as possible.’

De Blasio said that he is working closely with the governor’s office in determining the date for Phase 2. 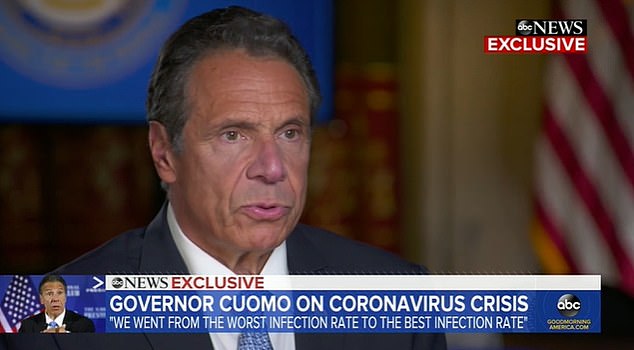 Cuomo spoke about his experience leading New York through the coronavirus pandemic in an interview with Good Morning America on Wednesday, where he described the past 100 days as ‘hell’.

He revealed how he would often look to memories of his late father, former New York governor Mario Cuomo, for comfort on the worst days.

‘There were many nights when I would get in bed and I couldn’t sleep, and I would just be staring at the ceiling,’ Cuomo said.

‘And I would say to myself: “What would he say?” And I could hear his voice, you know? And I knew what he’d say… and that gave me a lot of comfort, a lot of guidance… My father’s spirit lives in me. I know what he would say. I know his advice.’

He said that while he is crushed by the number of lives lost to the pandemic, he doesn’t blame himself.

‘New Yorkers who died did not die because we failed them,’ he said.

‘The goal should be, make sure we don’t lose a life that we could have saved, make sure no one dies because we failed them.

‘What happened in Italy where the hospital system was overwhelmed and people died on gurneys and in hallways, where society failed, government failed. In New York, we’ve lost people, but we did not lose anyone who we did not give the best medical care to.

‘That’s how I put my head on the pillow at night and that’s how I sleep.’

Cuomo also quashed any speculation that he could have his eye on a job in Washington, DC, saying he does not intend to run for president or to accept a cabinet position from presumptive Democratic nominee Joe Biden.