Coronavirus US: Northeast visitors may have spread cases South 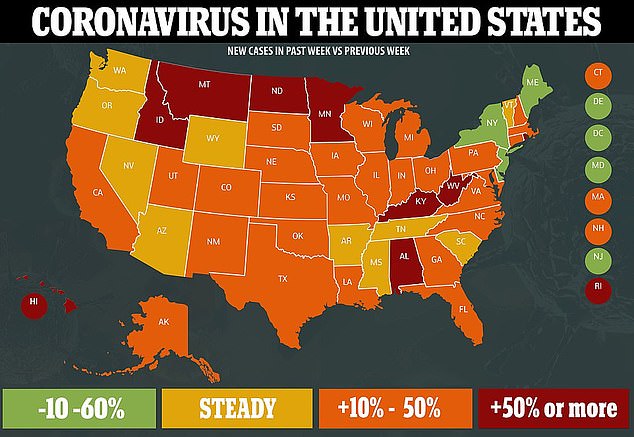 New cases have been spiking in Texas, Florida, Arizona and California in recent weeks and the US is now averaging about 50,000 to 60,000 infections per day. 46 states reported more new cases of COVID-19 last week compared to the previous week

His comments contradict those of White House task force member Dr Anthony Fauci, who said on Monday that the current surge was due to the US not completely shutting down early in the pandemic.

The CDC director’s comments were slammed by the Director of the Harvard Global Health Institute, Dr Ashish Jha, who argued that infections started to spike on June 1 – a week after Memorial Day celebrations.

‘Alaska, Idaho, Oregon, also start rising around the same time – within a week of Memorial Day. Did northern travelers vacation in Idaho, Alaska, Oregon and seed cases there too? Is it a coincidence many of these states relaxed around the same time?’ Jha tweeted. 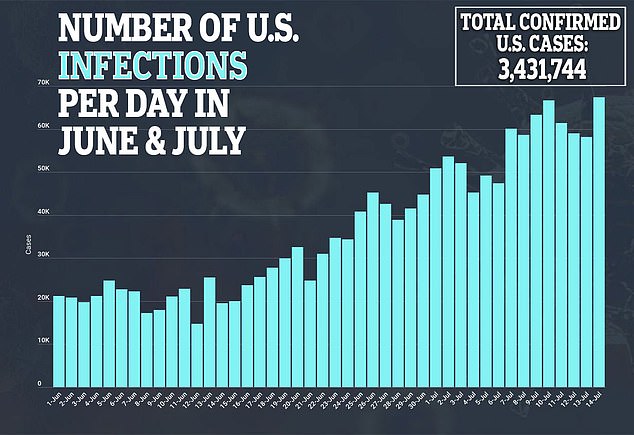 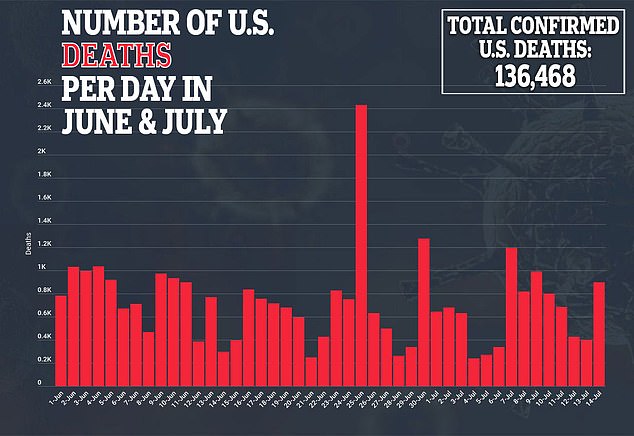 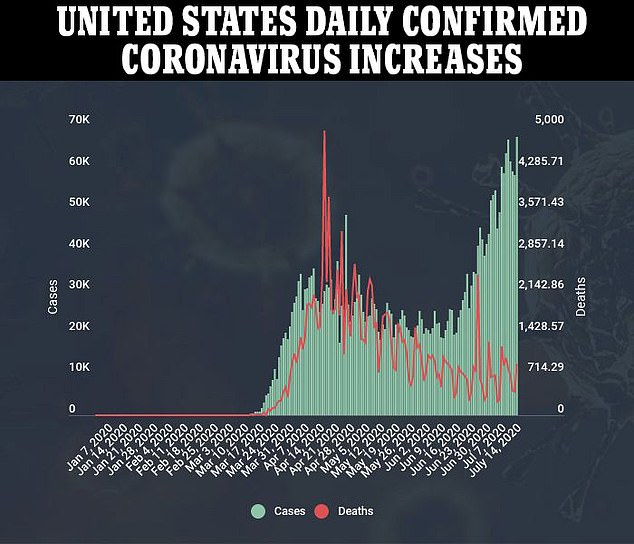 ‘How did these northern vacationers skip southern states like Virginia, which was still in phase 1? And what happened to these vacationers? Did they ever get home? And why didn’t they seed cases in the north before they left? Bottom line is that this is silliness.

‘Not sure why (Redfield) is pursing this argument. Either he’s looking at bad data or is learning the wrong lessons. Northern vacationers not cause of big national outbreaks. We have to get better at managing the pandemic. Drawing wrong lessons is harmful to that goal.’

Currently, there are more than 3.4 million infections across the US and more than 136,000 Americans have died from COVID-19.

New cases have been spiking in Texas, Florida, Arizona and California in recent weeks and the US is now averaging about 50,000 to 60,000 infections per day.

Deaths related to COVID-19 have also been rising in the last week with about a dozen states reporting increases in deaths for at least two straight weeks, including California, Florida and Texas.

‘We have a very significant problem in Florida, Texas, Arizona, California, South Carolina, looks likes things are starting to heat up in Tennessee,’ Redfield said.

He said, however, that he believes the US could get COVID-19 under control with four to eight weeks if all Americans wear a mask and continue to social distance.

‘I think if we can get everyone to wear masks right now, we can bring this under control within four, six, eight weeks,’ Redfield said.

‘I am glad to see the president and vice president wear a mask. Clearly, in their situation they could easily justify they don’t need to… but we need for them to set the example.’

He said he was ‘worried’ about the fall and winter given it coincides with the flu season.

TEXAS DEATHS: 87 new deaths were reported in Texas on Monday, down from the record 105 on July 9 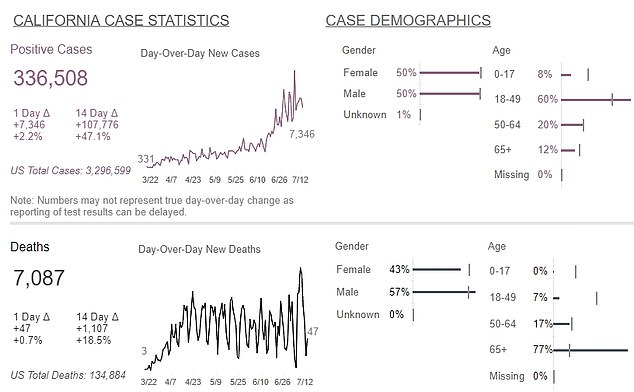 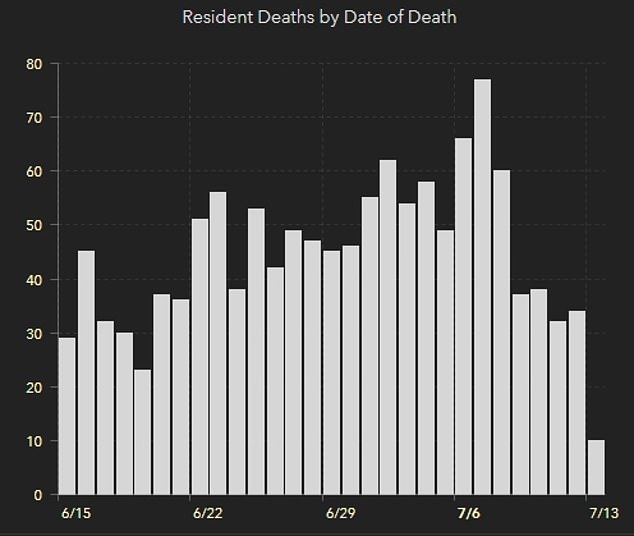 FLORIDA DEATHS: Florida added a record 132 fatalities to its death toll on Monday

‘I do think the fall and the winter of 2020 and 2021 are probably going to be one of the most difficult times that we’ve experienced in American public health because of… the co-occurrence of COVID and influenza,’ he said.

It comes as 46 states reported more new cases of COVID-19 last week compared to the previous week, according to a Reuters analysis of data from The COVID Tracking Project.

New cases also continue to rise with the US reporting over 400,000 infections for the week ending July 12, which was up 21 percent from the previous seven days.

While Southern and Western states are seeing the biggest increase in cases, infections are also rising in the Midwest with Minnesota cases up 60 percent, Missouri up 40 percent and Iowa up 30 percent.

Meanwhile, more than 5,000 people died from COVID-19 between July 6 and July 12, which is an increase of 46 percent compared to the previous week. 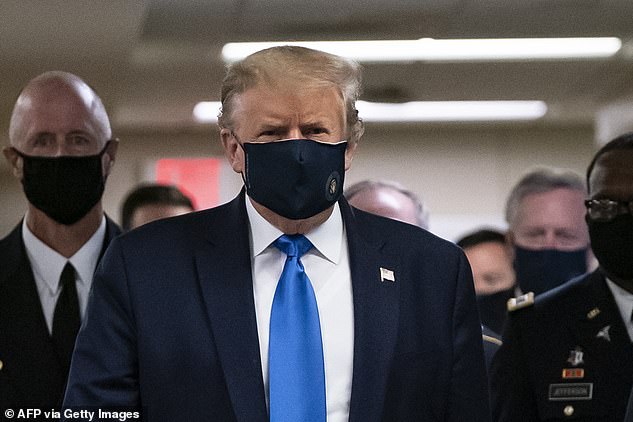 Redfield said he believes the US could get COVID-19 under control with four to eight weeks if all Americans wear a mask and continue to social distance. He commended President Trump, who has previously refused to wear a face covering until last Saturday, for setting an example

Until now, the number of deaths per day from COVID-19 had been falling for months even as hot spots states like Florida, Texas and Arizona saw explosions in cases and hospitalizations.

Health officials have been warning for weeks that deaths would surge again because the fatality rate lags several weeks behind infections.

A coronavirus death, when it occurs, typically comes several weeks after a person is first infected.

Experts had predicted states that saw spikes in cases and hospitalizations would, at some point, see deaths rise too.

The impact of the new surge in deaths has been felt by the healthcare workers grappling in overstretched hospitals with Texas and Arizona requesting refrigerated trucks as morgues reach capacity.

A forecast model from the University of Washington’s Institute for Health Metrics is predicting the death toll to rise to 208,255 by November 1.

Experts say the death toll may not be as bad as when the pandemic first hit because testing was extremely limited early on and that many people’s health behaviors have now changed with mask-wearing becoming more common in some places.

US sees record single-day spike with 67,400 new COVID-19 cases – and almost half of those infections are from Texas, Florida and California

The United States has set yet another record for new coronavirus cases after hitting a single-day spike of 67,400 with almost half of those infections coming from Texas, Florida and California.

There were 67,417 new cases on Tuesday, bringing the total to more than 3.4 million infections across the US.

More than 136,000 Americans have died from COVID-19 after 900 additional fatalities were added to the death toll. 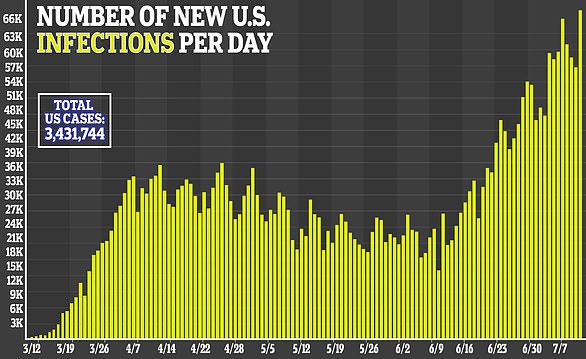