Coronavirus: US warships spend a record number of days at sea

Two US Navy ships have set new records for the number of consecutive days spent at sea after they were forced to avoid making port visits because of the coronavirus pandemic.

The two vessels left Norfolk, Virginia before Covid-19 had even been named, and headed towards the Middle East a week after a strike by Iran on a Iraqi military base in January 8, 2020.

But when the coronavirus made ship stops in foreign countries too risky, the USS Dwight D. Eisenhower and the USS San Jacinto were ordered to keep moving and avoid all port visits.

On Thursday, as they steamed through the North Arabian Sea, they notched their 161st consecutive day at sea, breaking the previous Navy record of 160 days. And they’re on pace to crush the record, since they won’t hit land again until they get home to Virginia later this year.

The USS Eisenhower, pictured sailing towards Naval Station Norfolk, Virginia, where it set sail from 161 days ago headed to the Middle East, before the coronavirus crisis. The Eisenhower is one of two ships to have broken the record of longest consecutive days at sea 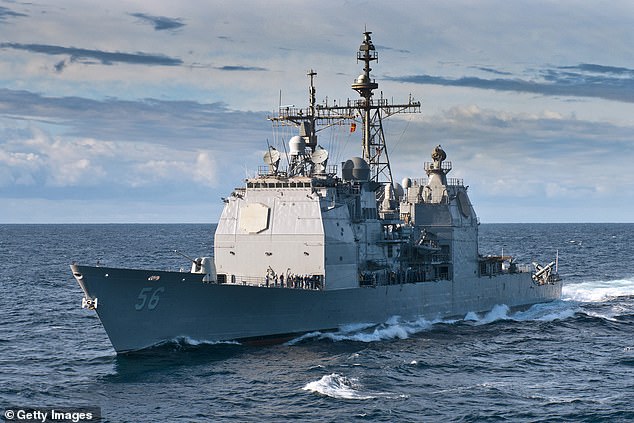 The guided-missile cruiser USS San Jacinto, pictured in 2012, is one of two ships to have broken the record of longest consecutive days at sea, along with the USS Eisenhower

The milestone, Navy Capt. Kyle Higgins said, ‘is not one that I think we really wanted but one that the circumstances of the world thrust upon us. And we embraced it with style.’

When the ships left home in January, COVID-19 was just starting to emerge. By the time they crossed the Atlantic and moved into the Mediterranean Sea, the virus was escalating.

In March, Vice Adm. Jim Malloy, the Navy’s 5th Fleet commander, ordered a stop to all port visits to reduce the chance of spreading the virus through the fleet. Other ships were battling outbreaks, including the USS Theodore Roosevelt, which got sidelined in Guam. 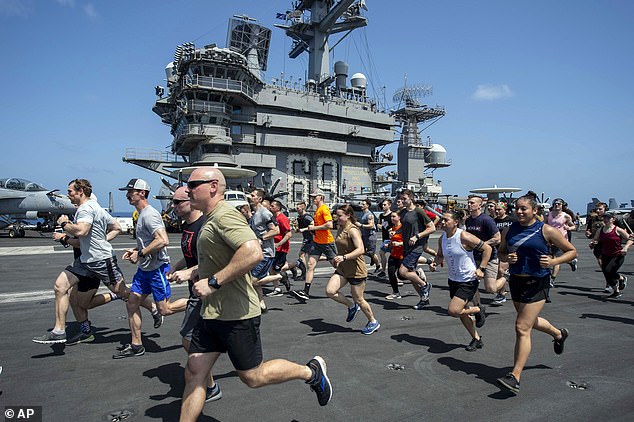 Pictured: Navy Sailors run on the flight deck aboard the aircraft carrier USS Dwight D. Eisenhower to keep feet on May 24, 2020. the Eisenhower has now not docked for 161 days

With that, Higgins, the Eisenhower commander, and Capt. Edward Crossman, the San Jacinto commander, knew their sailors wouldn’t set foot on land for some time. Both were interviewed a few days before the ships broke the record. 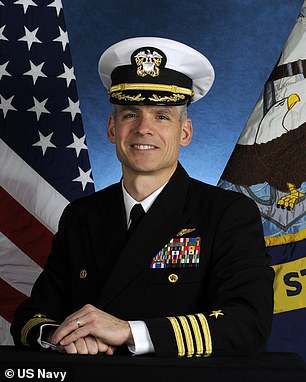 For more than five months, the Eisenhower and the San Jacinto cruiser that accompanies it, have been at sea, with no onboard visitors and strict controls over how aircraft deliver their supplies.

The isolation has been challenging. Port calls not only give sailors time for rest and relaxation, they also allow experts to come aboard to do difficult repairs.

When the San Jacinto’s helicopter bay door broke, the crew members had to get creative. It was the middle of the night, and they realized they needed to replace a large sprocket.

‘My guys did the research, and they said, ‘Hey, these 90-pound dumbbells are made from the same material that we need for this gear,’ Crossman said in an interview from the ship. So, they took the dumbbell down to the machine shop and created the part.

‘If they were magicians,’ Crossman said, ‘they’d have 100 rabbits running around the house because they keep pulling them out of their hats.’ 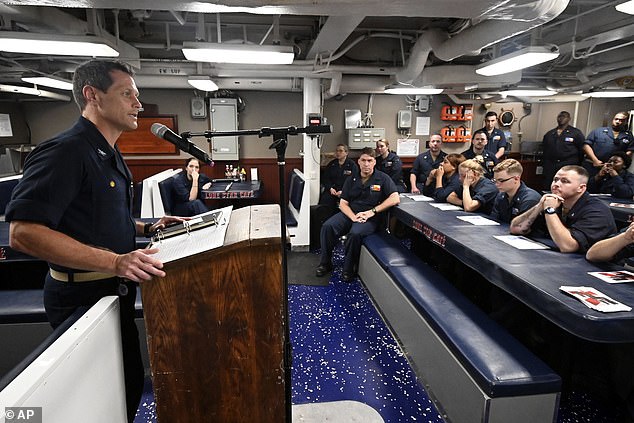 Pictured: Navy, Capt. Edward Crossman (left) assigned to the guided-missile cruiser USS San Jacinto speaks to the sailors aboard the ship during a talent show in the Arabian Sea May 15, 2020 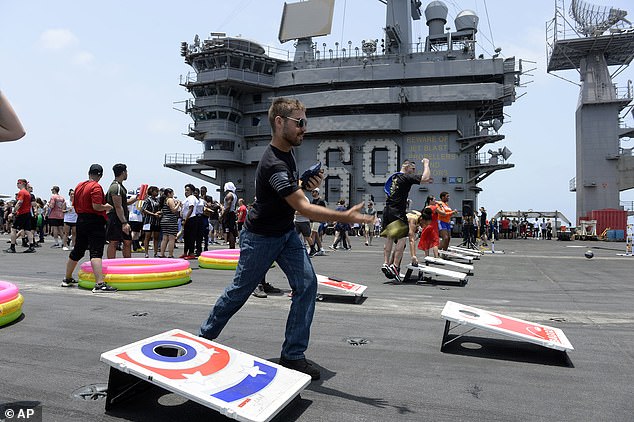 Pictured: Sailors participate in sporting events on the flight deck of the aircraft carrier USS Dwight D. Eisenhower on June 6, 2020

Petty Officer 1st Class Joshua Grimes, a machinist mate, is one of the sailors responsible for keeping machinery operating. When the door broke, it was his team that figured out how to fix it.

‘I was skeptical, but the way things were going I didn’t really count it out,’ he said. ‘Definitely the helo hangar door is the craziest thing we pulled off.’ 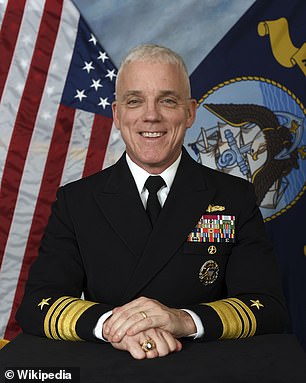 On the Eisenhower, crew members had to safely replace a large, critical fan motor for the flight deck. It took four teams from the electrical, engineer, supply and machinist departments, but after consulting with experts on shore, they broke down the fan, got it onto a makeshift platform and installed the new part.

‘Normally, this job would have called for cutting into the ship to get it down there,’ said Higgins. ‘I’m happy to report that the fan and motor are operating fine and we are 100% operational again because of it.’

Crew entertainment has also gotten creative. Disappointed sailors watched as they passed countries along the Mediterranean and headed through the Red Sea without stopping.

‘This is my first ship as well as my first deployment,’ said Petty Officer 2nd Class Dionesha Simmons. ‘It’s a bit of a struggle just because I was looking forward to some of the port calls.’

Instead, she said, she’s having fun making brunch for the Eisenhower crew on ‘Waffle Saturdays.’ She and others take over to give the cooks a break. 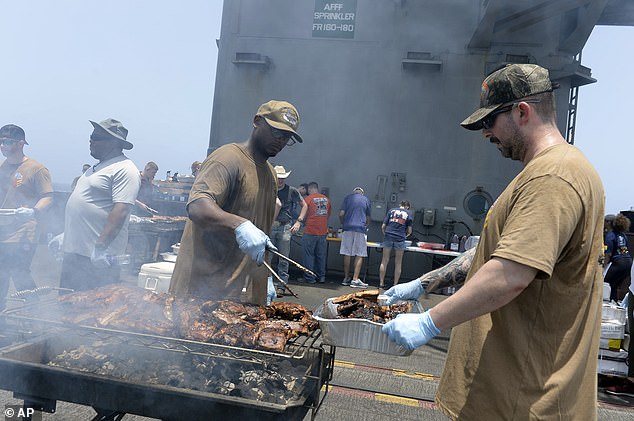 Sailors participate in a steel beach picnic on the flight deck of the aircraft carrier USS Dwight D. Eisenhower on June 6, 2020 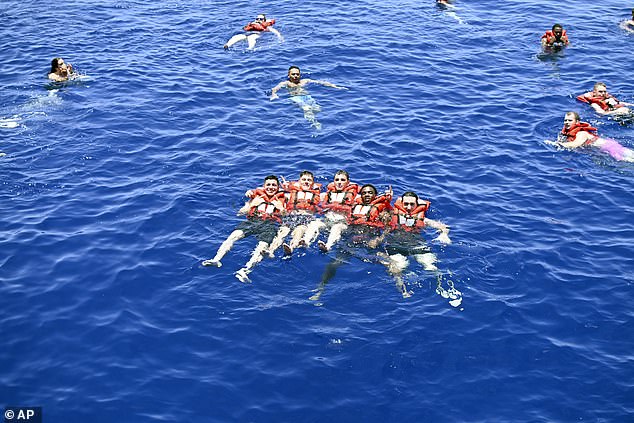 Sailors assigned to the guided-missile cruiser USS San Jacinto (CG 56) pose for a photo during a swim call in the Persian Gulf, May 17, 2020

Higgins and Crossman said they’re trying to give sailors dedicated time off – sometimes a full 24 hours to do whatever they want, other times a couple days off in a row.

They plan more swim days and ‘steel beach picnics’ when sailors can wear civilian clothes and barbecue on the flight deck. The Eisenhower crew had cigar socials with jazz music. One popular event, said Petty Officer 1st Class Travis Bush, was a slam dunk basketball contest that he said relieved stress and showed off some talent.

On the San Jacinto, sailors substituted a mustache contest for the March Madness tournament. The 64-person bracket competed to see who could grow the ugliest mustache.

‘There’s definitely some disappointment in not going into port, especially considering our original plans. But we’ve made it this far,’ Grimes said.

‘It actually makes a lot of us feel very proud that we can be part of this. … The longest I’ve been underway is a little over 40 days, and it’s destroyed that record.’ 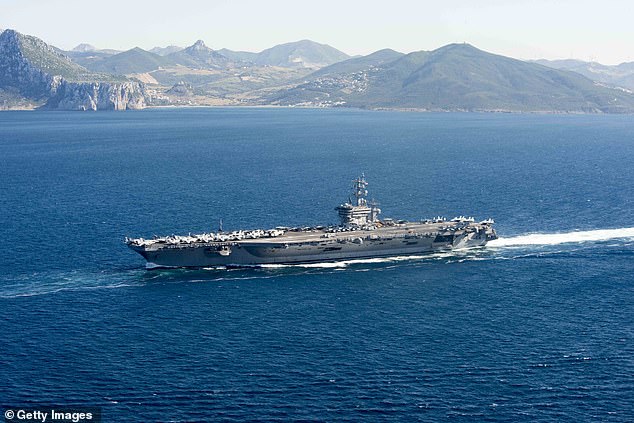 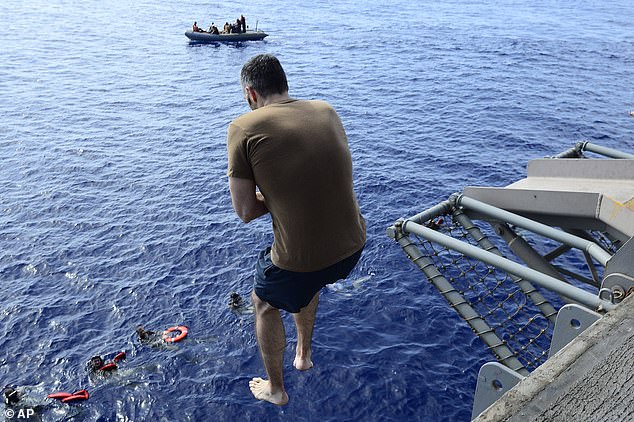 Pictured: A sailor jumps off the USS Eisenhower aircraft carrier, participating in one of the activities the sailors have been doing to keep themselves occupied during 161 days at sea

The 160-day record was set in February 2002 by the USS Theodore Roosevelt, early in the Afghanistan war. The previous 152-day record was set by the Eisenhower in 1980 during the Iranian hostage crisis. Navy historians say it’s difficult to check long into the past, because records are spotty.

Crossman said sailors were competing to design the certificate that they’ll get, adding, ‘We’re kind of proud of the fact that we’re taking the record, but we’re going to blow it away.’

Higgins ordered ‘the best dinner’ the crew could make, with surf and turf, a big cake and ice cream. He said he’ll wait before gathering the crew for a celebratory photo.

‘It’ll be 161 days when we break the record, but we think we may be out here a little bit longer and the potential to pass that mark by quite a bit is fairly good,’ he said. ‘So we might wait for a more round, even number.’

Now one critical question remains: Which ship will pull into Norfolk last, snagging the record?

‘I’ve had a couple requests to see if we could stay out longer to make sure we beat the Ike,’ Crossman said with a laugh.

Higgins says they’ve joked about it. His response? ‘Time will tell.’