Coroner is to investigate the death of Lady Kathryn Vestey

A coroner is to investigate the death of Lady Kathryn Vestey after a pathologist’s report threw doubt on whether it was as a result of natural causes.

However today – four months later – a coroner formally opened an inquest into her death after revealing that a pathologist discovered that her death from cardiac disease might have been as the result of prescribed drugs she had been given.

The inquest has been adjourned today into the death of Lady Kathryn Vestey, centre, the first wife of Lord Samuel Vestey. Lady Kathryn died at her home in Burford last December. The couple divorced in 1981 after 11 years of marriage 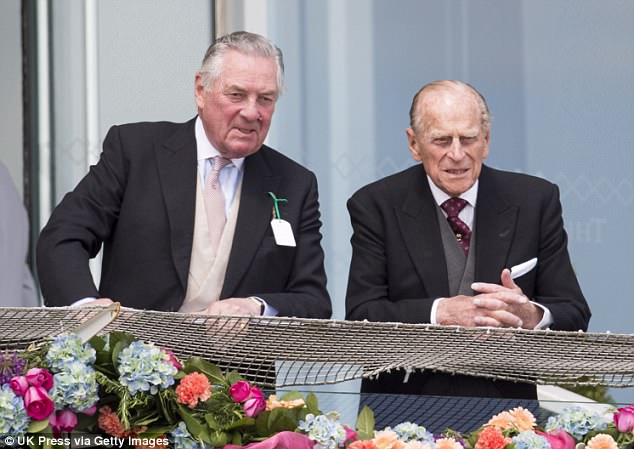 Lord Vestey, pictured here with the Duke of Edinburgh, is the former chairman of Cheltenham Racecourse and had served the Queen as Master of the Horse

Lady Vestey passed away at her home in Burford, last year and it was originally reported that she had died peacefully at home.

She was previously married to Lord Vestey, who served the Queen as Master of the Horse. Ther marriage ended in divorce.

Lord Vestey is the former Chairman of Cheltenham Racecourse and is regularly seen with the Queen at equestrian events. He has an estimated wealth of £750 million thanks to his meat business, the Vestey Food Group, which was linked to the horse meat scandal after it had sold meat to Sodexo.

While it was today confirmed she died at home under the watchful eye of a live-in carer, an inquest was opened into the death due to the presence of morphine and codeine, amongst other pain relieving drugs.

The reason for the delay in the opening of the inquest was to ascertain a cause of death, Mr Darren Salter revealed.

He added: ‘Lady Kathryn Vestey was a 73-year-old woman and had been a housewife for most of her life.

‘She died on December 13 2017 at her home address in Burford. She was formally identified to the Thames Valley Police by the live-in carer.

‘Initial reports from Thames Valley Police, said that she was found deceased at her home. But the initial reason was unascertained and needed further investigation, particularly a toxicology report.’

The cause of death was said to be contributed to by the presribed drugs found in her system after the post-mortem and toxicology reports were carried out, the inquest in Oxford heard.

‘The inquest will now be adjourned and re-opened at a later date, where this will be further examined.’