A coroner’s report on the death of Otto Warmbier conflicts with some claims made by his grieving parents, who say he was tortured during the 15 months he was detained by the North Korean government.

In an interview on Fox & Friends on Tuesday, Fred Warmbier said that when his son was released and returned to the U.S. in a medically-induced coma in June, it ‘looked like someone had taken a pair of pliers and rearranged’ his bottom teeth.

But the Hamilton County Coroner’s report, obtained by the Cincinnati Enquirer on Tuesday, found Otto’s teeth were in ‘natural and in good repair’ when he died six days after returning to the U.S.

The coroner found a collection of 10 scars on Otto’s ‘well-developed, well-nourished’ body, but nothing serious enough to indicate he was tortured. 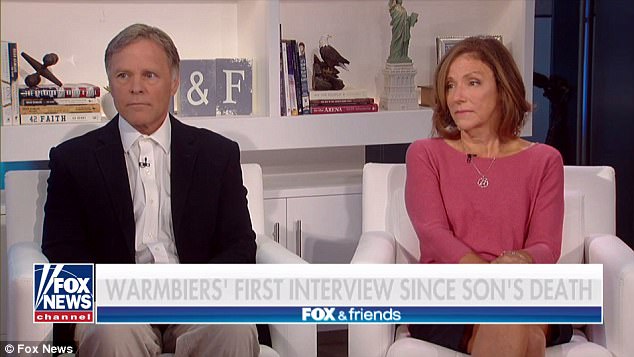 In a Tuesday interview, Fred Warmbier said ‘it looked like someone had taken a pair of pliers and rearranged’ his son’s teeth

At least half of them were faded, indicating that they were older.  The newer scars could have been caused by medical treatment – like one on the side of his neck that could have been the result of an intravenous line.

There was also one at the top of his sternum which looked like a ‘tracheotomy scar’ caused by inserting a breathing tube.

The coroner listed Otto’s cause of death as brain damage from lack of oxygen ‘due to an unknown insult more than a year prior to death’ – insult meaning injury.

The exact cause of that injury is unknown because the coroner was not allowed to perform a full autopsy by Otto’s parents.

Otto was a 21-year-old University of Virginia student in January 2016 when he visited North Korea with a tour group based in China.

He was detained in the country after being accused of stealing a propaganda poster from his Pyongyang hotel.

In June, the North Koreans decided to release Otto back to the U.S.  – revealing that he had fallen into a coma shortly after his trial more than a year before.

The North Koreans maintain that Otto fell into a coma after getting botulism and taking a sleeping pill. 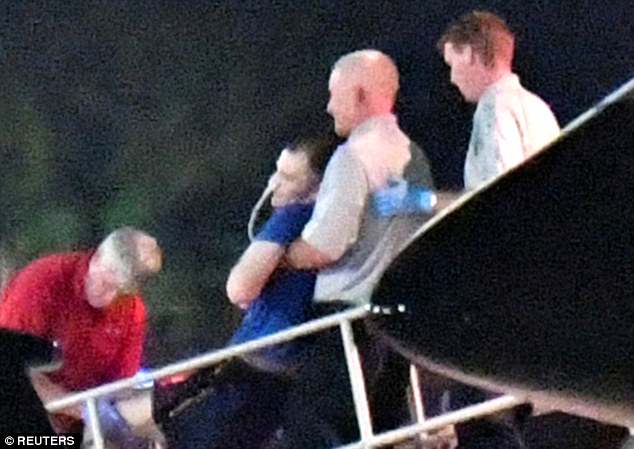 When he was returned to the U.S., doctors at the University of Cincinnati Medical Center said he showed no signs of broken bones or other trauma but that he had severe and extensive brain damage. They also said he showed no signs of botulism, though the toxin that causes the illness can’t stay in the body for more than a year. He died six days later.

In their interview on Tuesday, Warmbier’s parents said he was in a horrific state when he was returned.

Fred and Cindy Warmbier said that they heard a ‘howling’ sound when they walked up the steps of the private medical plane carrying their son after it landed in Cincinnati, Ohio back on June 13.

Otto had a shaved head, he had a feeding tube coming out of his nose, he was staring blankly into space, jerking violently.

‘We walked over to the plane, the engines are still humming, they had just landed…when we got halfway up the steps we heard this howling, involuntary, inhuman sound. We weren’t really certain what it was,’ Fred said.

They quickly realized it was their son Otto as they saw him screaming and jerking violently on a stretcher. Fred said Otto’s mother and sister ran off the plane at the initial sight of him.

‘Otto had a shaved head, he had a feeding tube coming out of his nose, he was staring blankly into space, jerking violently,’ Fred said.

He said within two days of being home, Otto’s fever spiked to 104 degrees and he had a large scar on his right foot. 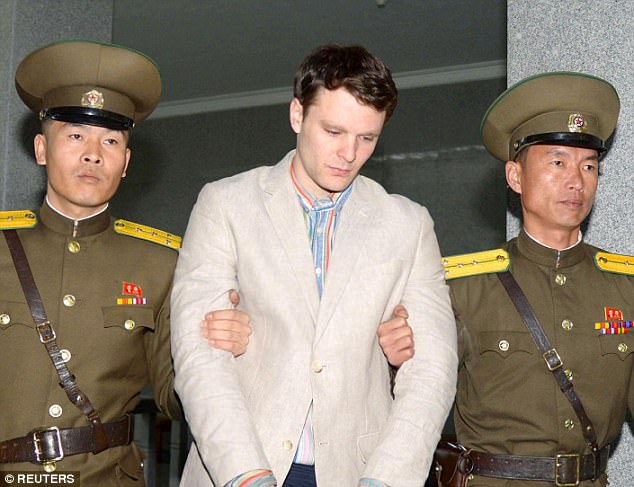 In March 2016, Otto was led away by North Korean police after being sentenced to 15 years hard labour. North Korean officials say the following day, he contracted botulism – a form of food poisoning – and that this is what caused his medical decline

Cindy said they had only been told that their son had suffered brain damaged when it was revealed the North Korean regime was returning Otto to his family on ‘humanitarian release’.

They said the reality of his injuries were much more severe than they could ever have imagined.

‘We thought he was in a coma. You couldn’t call it a coma,’ she said.

‘What we pictured, because we’re optimists, is that Otto would be asleep and maybe in a medically induced coma and then when our doctors here would work with him and he’d get the best care and love that he would come out of it.

‘Our image of Otto, as you know, was of someone just wonderful, beautiful inside and out. And to see how he came home was too much for us.

‘I almost passed out but I got it together and I rode in the ambulance with him. I did not want him to be alone anymore. He’d been alone for way too long. We stayed with him and loved him as best as we could.’

His parents said Otto spent his final days jerking and moaning in the tortured state before he died at the University of Cincinnati Medical Center on June 19.

The Warmbiers said they have had some time to heal in the three months since they buried their son but decided to speak out after seeing North Korea try to victimize themselves.

Their interview comes amid an escalating war of words between the Trump administration and North Korea. A North Korean official has claimed President Donald Trump has, in effect, declared war, which the White House denied.

Otto’s family held a public funeral for him at his old high school in the town of Wyoming, Ohio

‘We see North Korea claiming to be a victim and that the world is picking on them and we’re here to tell you: North Korea is not a victim. They’re terrorists,’ Fred said.

Cindy said she felt Otto had only been sent home because the North Koreans knew he was about to die.

Otto’s parents reiterated their belief that North Korea should be listed as a state sponsor of terror.

We see North Korea claiming to be a victim and that the world is picking on them and we’re here to tell you: North Korea is not a victim. They’re terrorists.

Fred has previously criticized former president Barack Obama’s administration for how little it did for their son, saying officials had counseled the family against speaking out to avoid antagonizing the North Korean regime.

President Donald Trump tweeted shortly after the Warmbier’s interview aired, saying: ‘Great interview on @foxandfriends with the parents of Otto Warmbier: 1994 – 2017. Otto was tortured beyond belief by North Korea.’

Trump had previously blamed North Korea’s ‘brutal regime’ for Warmbier’s plight but it was the first time the president publicly accused North Korea of torture in the case.

US officials have said Trump was personally taken aback by Warmbier’s death and his comment Tuesday ratchets up the pressure on Kim Jong-Un’s regime.