A corrupt baggage handler who helped a gang smuggle £10m worth of ‘unadulterated’ cocaine through Heathrow Airport is facing jail.

Michael Sutherland, 48, and his assistant Leoina Townsend-Bartley, 32, helped coordinate internal flights for couriers arriving at the airport to pick up the cases as they landed.

Francisca Archer, 26, and Felicia Kufour, 66, were all recruited as couriers on at least one occasion, Southwark Crown Court heard.

Corrupt staff in Brazil loaded bricks of ‘unadulterated cocaine’ into ‘ordinary bags’ stored in the plane’s hold, which crooked staff in London sent descriptions of them, a court was told

Ali, Sutherland, Townsend-Bartley, Archer and Kufour were convicted of conspiring to import cocaine between September 2015 and December 2016 following a three-month trial.

Earlier Timothy Probert-Wood, prosecuting, had told jurors: ‘It is proper organised crime. And when it works it is phenomenally lucrative.’

Mr Probert-Wood said the plot centred around the daily 1pm flight into Terminal 5 from Rio de Janeiro each day.

Crooked workers in the UK were then sent photos and descriptions of the bags to look out for through Blackberry Messenger.

Rather than join the rest of the luggage going through security on the international arrivals carousel, bags were ‘ripped off’ and placed on the domestic arrivals carousel before being collected. 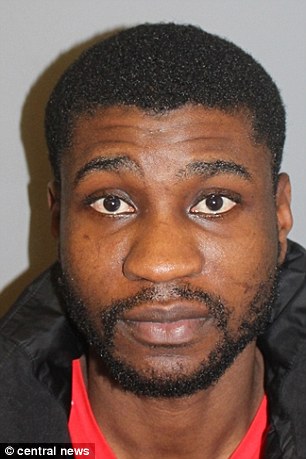 ‘If you think about it, the obvious reason for doing this is because security at domestic arrivals is far, far less,’ said Mr Probert-Wood.

‘There is no customs, no immigration, you just pick up your bag and there you go.

‘It was far, far less and so much easier to do that.’

‘The existence of this conspiracy came to the attention of authorities in the National Crime Agency and they mounted an operation to try and bring the thing to an end, to intercept drugs and arrest those involved and to stop the conspiracy operating,’ Mr Probert-Wood told jurors.

‘Indeed, in the course of that operation, the National Crime Agency, together with the UK Boarder Agency, were able to intercept at Terminal 5 at Heathrow consignments of cocaine.

‘There were two seizures of cocaine at the end of 2015 and both were intercepted.

‘There were further importations of cocaine in 2016 which were also intercepted.

‘In total, over 100kg of very pure cocaine which started in South America and was intercepted by authorities worth millions on the street.

‘You will hear a relatively conservative estimate of 1kg of cocaine is worth about £30,000 wholesale.

‘So, it is a very lucrative trade, which is the reason, obviously, people agreed to be involved in doing it. 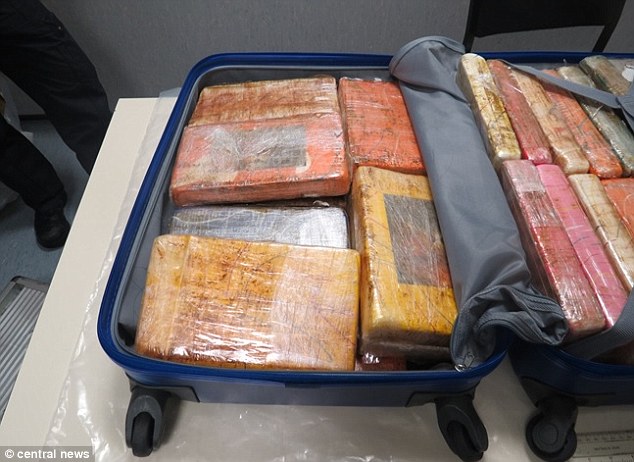 But the ‘real key’ to the plot was the recruitment of ‘corrupt baggage handlers at Heathrow Airport’, the court heard

‘Undoubtedly, on occasions some consignments inevitably got through and were never intercepted by the authorities.

‘When they did, some people made enormous amounts of money.’

The court heard the conspiracy involved a method known as ‘ripping on and ripping off’ whereby bags loaded with drugs were first placed in specific containers by staff in Brazil.

But the ‘real key’ to the plot was the recruitment of ‘corrupt baggage handlers at Heathrow Airport’.

Crooked staff including Preetam Mungrah, 43, of Thornton Heath, Damion Goodhall, 30, of Tooting, and Wilfred Owusu, 30, of Stoke Newington, were convicted of organising the importation of consignments last October.

Owusu organised couriers including Danovan Bull, 45, and Moses Awopetu, 38, to fly in from UK cities such as Aberdeen to then pick up the lucrative luggage and walk without any customs checks.

Jurors heard Sutherland was ‘high up’ in the plot, organising couriers and ‘therefore involved in the onward distribution of cocaine’.

‘We say Mr Sutherland organised Mr Awopetu and monitored him and was in contact with Jhurry and Mungrah in so doing,’ said the prosecutor.

Townsend-Bartley assisted Sutherland by booking Awopetu’s hotel and flight from Edinburgh into Terminal 5 before a load was intercepted on November 12, 2016, the court heard. Couriers including Danovan Bull (left), 45, and Moses Awopetu (right), 38, were arranged to fly in from UK cities such as Aberdeen to pick up the luggage and walk without customs checks

Ali ‘at different times, in different ways, assisted Jhurry’ ripping off the bags which would be collected by couriers said to include Archer and Kufour.

Gurmit Singh, 56, of Wimborne Avenue, Hayes and Princewill Nwankwo, 28, of Nile Close, Hackney, were cleared of the same charge.

Danovan Bull, of Hickmore Walk, Clapham, admitted possession of class A drugs with intent to supply at Isleworth Crown Court in January 2016 and was sentenced to six years in prison.

The rest of the gang face sentence on April 9.

‘This was a sophisticated plot and at the centre of it was a man who used his privileged access to Heathrow and insider knowledge of the airport’s systems for criminal purposes.

‘This kind of corruption threatens the security of the UK border and the public at large which is why the NCA and its partners are tackling it as a priority.

‘Working with Border Force, Airport authorities and the airline community we were able to stop this organised crime group in its tracks and pull together evidence which demonstrated their guilt to the jury.’

Border Force Heathrow Director Phil Douglas said: ‘Our officers played a pivotal role in this investigation, helping to bring these individuals to justice.

‘Officers worked closely with the National Crime Agency, gathering vital intelligence before arrests were made. They also used their expert knowledge of the airport and its staff on the day arrests took place.

‘This case demonstrates that Border Force officers are on constant alert at all times of the year to keep restricted and prohibited items out of the country and prevent them getting into the hands of organised crime groups.’