Corrupt detective, 49, is jailed for four years after his ex-wife saw him stash £1,000 bribe in a kitchen cupboard as they fought bitter divorce battle

Detective Constable Mark Hopkins, pictured outside Cardiff Crown Court, was warned he faced jail for perverting the course of justice

A corrupt detective has been jailed for four years after his ex-wife revealed she saw him hiding £1,000 of bribery cash in her kitchen cupboard.

Detective Constable Mark Hopkins, 49, took the money to convince the victim of a baseball bat attack in Tonypandy, South Wales, to withdraw his witness statement, collapsing the investigation into the incident.

Cardiff Crown Court heard that Hopkins did ‘everything in his power’ to ensure the culprits were never jailed after he was offered money by a fellow detective who knew the attacker.

He then bragged about it to his wife Tina Burton, who saw him stuff wads of cash into the kitchen cupboard.

The court heard his deal stayed a secret for more than six years – until his wife went to police in 2015, during their bitter divorce.

Adam Payter, prosecuting, said: ‘She told police that one night in 2008, Hopkins came home from work and boasted to her about something that had happened in work.

‘He told her that a boy had been beaten up. He was being offered money to drop the allegations.

‘There was money in it for Hopkins if he got the boy to drop the allegations.’

Hopkins was arrested and denied everything, claiming that he had never received any money, jurors were told.

He did however accept that his investigations into the assault had been poor.

Giving evidence at his trial, Hopkins claimed his ex-wife was ‘bitter and twisted’ following their separation.

He said: ‘She despises me just as much as I despise her. Everything she says isn’t true.’

The court heard he persuaded a crime victim to accept a £3,000 pay-off to drop the charges after being beaten up with a baseball bat. 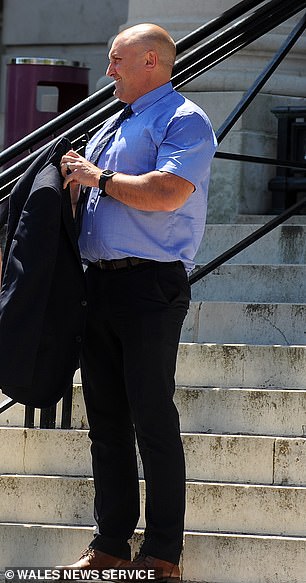 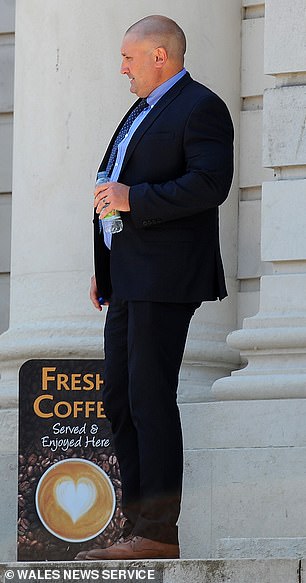 Hopkins, 49, took money to convince the victim of a baseball bat assault to withdraw his witness statement, collapsing the investigation into the incident

Beating victim Richard Diaper told the court how Hopkins was off-duty when he called at his home to convince him to to withdraw his witness statement for a £3,000 pay-off.

Hopkins, who had worked with South Wales police for 18 years, was the officer responsible for investigating the baseball bat assault on Mr Diaper.

Giving evidence at Cardiff Crown Court, Mr Diaper said: ‘There was a knock at the door and I saw it was Hopkins.

‘He said he was off-duty. I thought that was a bit odd but I just assumed he was checking I was okay.

‘He said it would be a good idea to accept the money.

‘He said if I accepted the money I’d have to drop the charges. I just took it in and did what he said.’

Within an hour of Hopkins’ visit, Mr Diaper received a call asking if he’d thought about the offer for ‘compensation’ after the attack.

Hopkins, of Rhondda, South Wales was found guilty of perverting the course of justice after a trial.

Recorder of Cardiff Eleri Rees sentenced him to four years in jail.