The 81-year-old Bill Cosby, seen here after the first day of his sentencing hearings, is the first celebrity convicted and sentenced for a sex crime since the start of the #MeToo era

Disgraced television icon Bill Cosby was sentenced to at least three years in prison, handcuffed and taken into custody Tuesday for sexually assaulting a woman at his Philadelphia mansion 14 years ago.

The 81-year-old, once beloved by millions as “America’s Dad,” is the first celebrity convicted and sentenced for a sex crime since the downfall of Harvey Weinstein ushered in the #MeToo movement and America’s reckoning with sexual harassment.

Found guilty five months ago of drugging and molesting Andrea Constand, a former university basketball administrator, Cosby was impassive when Judge Steven O’Neill handed down the sentence in Norristown, Pennsylvania.

It makes him one of the famous Americans ever sentenced to prison in a country where fame and unlimited wealth spent on brilliant lawyers have tended to help celebrities avoid jail in the past.

The judge also branded him a “sexually violent predator,” a humiliating designation that will force him to register with police for the rest of his life and to submit to mandatory counseling.

His prison sentence means that Cosby can apply for parole after three years. His requests will be reviewed by a special committee and can be rejected up to a maximum sentence of 10 years behind bars.

The defense declared their intention to appeal and asked for their client to be released on bail. But O’Neill rejected that request. Cosby was handcuffed and led out of the courtroom in his shirt and braces.

Prosecutors had demanded five to 10 years in prison, after the three counts of aggravated indecent assault were merged into one, together with a $25,000 fine and the full cost of the prosecution.

Defense lawyers had argued that Cosby should be confined to house arrest, as he has been since his conviction, arguing that he is too old and too frail — the actor says he is legally blind — to endure a correctional facility. 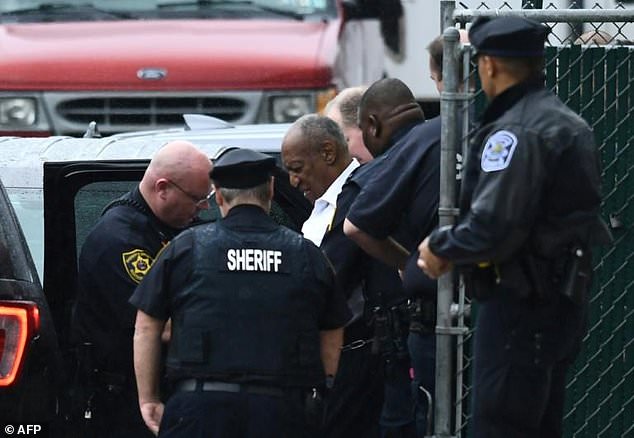 Comedian Bill Cosby, seen being taken into custody at Montgomery County Courthouse on September 25, 2018 in Norristown, Pennsylvania, after being sentenced to at least three years in prison

Looking at Constand, seated in the gallery, O’Neill referenced the words “no, no, no” that she heard in her head as the assault took place in January 2004, and she was powerless to fight him off after being sedated.

“You were convicted of a very serious crime,” O’Neill told Cosby. “No one is above the law,” he added. “No one should be treated differently.”

The judge said he recognized the defendant’s age and blindness, but said they could not be the determining factors. Cosby has been confined to his home on a $1 million bail for nearly three years.

“The defendant is in need of correctional treatment,” O’Neill said.

Psychologist Timothy Foley, testifying for the defense, said that the risk of Cosby re-offending was “extraordinarily low.”

But a member of the state board recommending that he be registered as a sexually violent predator, said that it was “possible” he had already met “a future victim”.

“Being blind doesn’t make you unconscious,” she told the court on Monday, on the first of his extended two-day sentence hearing. 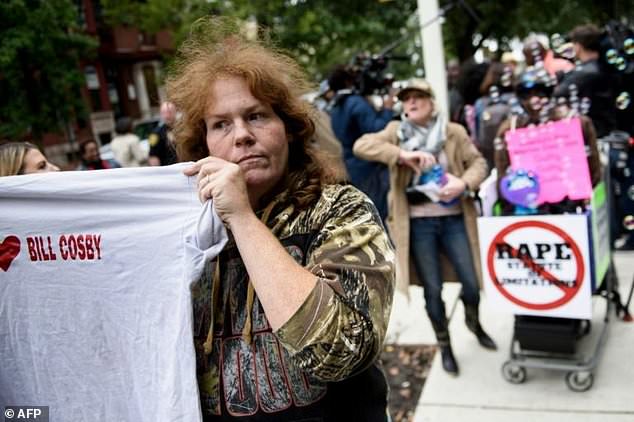 A supporter holds up a shirt after the first day of comedian Bill Cosby’s sentencing hearing September 24, 2018 in Norristown, Pennsylvania

Once a towering figure in late 20th century American popular culture and the first black actor to grace primetime US television, he brought no character witnesses, declined to address the court or emphasize past years of philanthropic work as mitigating circumstances in his favor.

Around 60 women, many of them onetime aspiring actresses and models, have publicly branded Cosby as a calculating, serial predator who plied victims with sedatives and alcohol to bed them over four decades.

But only one case — that involving Constand, a former Temple University employee turned massage therapist — was recent enough to be prosecuted.

“Bill Cosby took my beautiful, healthy young spirit and crushed it. He robbed me of my health and vitality, my open nature, and my trust in myself and others,” she wrote in a five-page victim impact statement.

“When the sexual assault happened, I was a young woman brimming with confidence and looking forward to a future bright with possibilities.

“Now, almost 15 years later, I’m a middle-aged woman who’s been stuck in a holding pattern for most of her adult life, unable to heal fully or to move forward.”