Fat transfer operations may seem a risk too far. Last year, it was revealed that women undergoing buttock augmentation with fat had a one in 3,000 chance of dying following the procedure, also known as ‘the Brazilian butt lift’ – making it the deadliest of all cosmetic procedures.

Statistics released last week showed that some 28,000 people in the UK underwent cosmetic surgery in 2018 – about half the number in 2013.

Instead, the choice these days seems to be ‘tweakments’: smaller procedures with, hopefully, subtle, natural results.

A raft of these new procedures were unveiled in New Orleans last week and no doubt will soon be winging their way across the Atlantic.

Here are some of the latest advances, and what the experts had to say about them.

Launched in the UK last autumn, EMsculpt is a device that hones muscles by blasting them with electromagnetic energy. Rapid pulses activate nerves that control muscles, making them contract spontaneously. The entire muscle is activated, rather than the 40 to 70% achieved by tensing. (File image)

Launched in the UK last autumn, EMsculpt is a device that hones muscles by blasting them with electromagnetic energy.

Initially designed for the abdomen and buttocks, the device has now been modified by the Czech company behind it, BTL, to also target smaller muscle areas: the biceps and triceps and calves.

The entire muscle is activated, rather than the 40 to 70 per cent achieved by tensing.

While stomach and buttock treatments use large, paddle-like applicators attached to the body, the new designs are smaller and curved in order to fit the arms and lower legs. One 20-minute session can mimic the effect of 20,000 biceps curls.

The downside, explains Louisiana surgeon Dr Simeon Wall Jr, is that without regular use, the muscle gained may quickly wither away.

‘You’re not going to see the best results unless you exercise and eat well,’ he adds.

Treatments could cost from £750 per session, although clinics may offer discounts for packages of multiple treatments.

CURE FOR CELLULITE… BUT IS IT WORTH THE PAIN?

Injections of a drug called collagenase clostridium histolyticum – brand name Xiapex – into the buttocks and thighs may help reduce the appearance of ‘orange-peel’ skin dimpling, otherwise known as cellulite, which affects up to 90 per cent of women.

Cellulite is simply normal fat beneath the skin. It appears lumpy because it pushes against the connective tissues, called septae, that anchor the skin to the lower muscular layer. Even slim women have cellulite, but the dimpled appearance can be exaggerated with both weight gain and ageing due to loss of elasticity in the skin.

Xiapex is an enzyme that breaks down collagen, the protein than makes up the septae. Injected into dimples in the buttocks, it dissolves the septae, helping to smooth out the skin.

Cellulite is typically graded in severity on a scale of one, which is mild, to four, which is severe.

In studies, volunteers had 12 dimples treated on each buttock. Each dimple was injected three times. Three sessions, 12 weeks apart, were given after which patients saw a one- or two-point improvement in cellulite severity.

But British consultant cosmetic surgeon Nigel Mercer warns: ‘Injections can be painful and in many cases, releasing the septae doesn’t simply make the skin spring back to flat, so it may not be enough to erase the dimples.’ 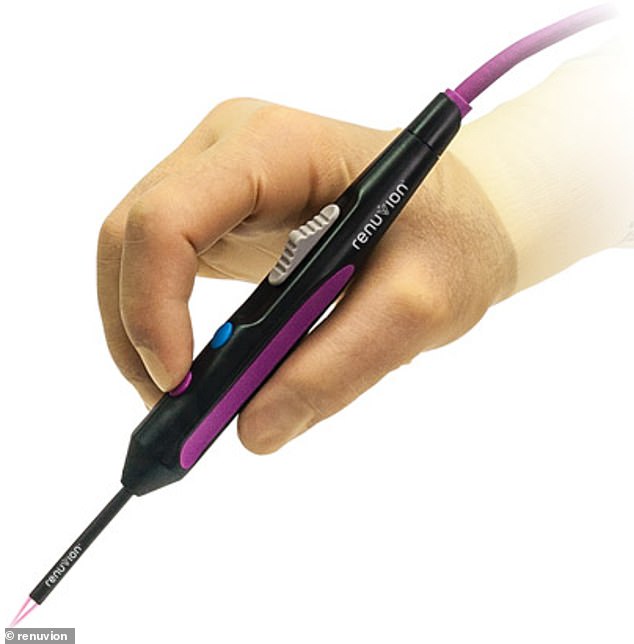 Another new non-surgical skin-tightening and resurfacing technology is the Renuvion device (pictured). This uses a unique type of energy which the manufacturers have called J Plasma, a heated helium gas. Emitted from the end of the machine’s needle-like handpiece, it looks like a mini flame-thrower

MINI FLAME-THROWER TO TIGHTEN THE SKIN

Another new non-surgical skin-tightening and resurfacing technology is the Renuvion device.

This uses a unique type of energy which the manufacturers have called J Plasma, a heated helium gas.

Emitted from the end of the machine’s needle-like handpiece, it looks like a mini flame-thrower.

The needle is slid beneath the skin and moved around. The heat causes the skin and tissue to shrink. The technology is designed for use on the face, under the arms, on the stomach and even above the knees.

In the wrong hands, heating beneath the skin can be a disaster, claimed Dr Wall. ‘We have seen horrific third-degree burns in some patients who’ve had procedures like these, and there is little that can done to help them,’ he said. Mr Mercer agreed: ‘It’s not the technology that’s the problem, it’s the person using the technology – the margin for error is small, and in the UK there isn’t much regulation about who can use these machines.’ 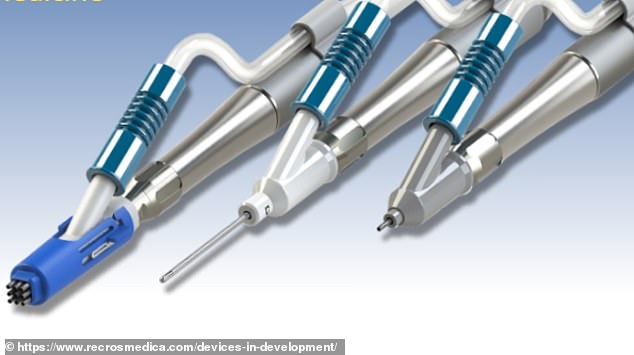 The non-surgical facelift is a way to tighten lax, wrinkly skin without cutting and stitching – or a general anaesthetic. Two new methods were showcased last week, including the Recross rotational fractional resection (above). The hand-held device houses tiny ‘scalpettes’ – hollow, blunt needles – in the tip. These rotate as they are pressed into the skin and a suction device then pulls out the core of tissue within the scalpette

NO MORE JOWELS WITH A ‘HOLE PUNCH’ FACELIFT

The non-surgical facelift is a way to tighten lax, wrinkly skin without cutting and stitching – or a general anaesthetic.

Two new methods were showcased last week: the Recross rotational fractional resection and the Cytrellis dermal micro-coring device. Both are hand-held devices that house a number of tiny ‘scalpettes’ – hollow, blunt needles – in the tip. These rotate as they are pressed into the skin and a suction device then pulls out the core of tissue within the scalpette.

Between five and ten per cent of the total skin surface area is removed via these micro-incisions. These then close up, shrinking the skin, giving a ‘lifting’ effect.

In a new study, 90 per cent of Recross subjects who had treatment said they ‘would recommend it to a friend’, but one in ten was left with visible scarring.

‘The size of the holes made is the problem,’ said Mr Mercer. ‘Scarred skin is weaker skin, which could cause problems further down the line.’

Cytrelis achieves similar results but uses finer needles, meaning there is no scarring. ‘Cytrelis is for younger patients who are looking for a subtle improvement,’ said Boca Raton, Florida-based surgeon Jason Pozner.

Given the cost is likely to be in the four-figure region, the value for money remains to be seen.