Could a new jab stop all strains of flu? UK researchers are working on a ‘universal’ vaccine

A new universal long-lasting vaccine could prevent the need for yearly flu jabs.

Currently, scientists have to predict every year what the new strain of flu will look like, but by the time the vaccine has been made, the strain of virus may already have changed.

Fingers crossed: The new vaccine, developed at the University of Oxford, protects the body against flu in a way that makes it more universal

Public Health England admitted the jab had ‘no significant effectiveness’ in preventing people from being struck down, and was only 15 per cent effective overall.

UK researchers are now working on a ‘universal’ vaccine to protect against a number of strains.

The cells of the flu virus are like spherical cushions with lots of pins sticking out. Flu vaccines currently work by triggering an immune response to antigens — the heads of the pins — on the cell’s surface.

The immune system creates antibodies, which are then primed to attack and block the real flu virus when it comes along: the antibodies recognise the virus by its antigens.

The new vaccine, developed at the University of Oxford, protects the body against flu in a way that makes it more universal.

Researchers have found that while flu strains vary, all flu viruses contain epitopes (parts of the antigen to which antibodies attach), which vary much less than previously thought. Targeting these epitopes through vaccination would protect against all strains of the virus. 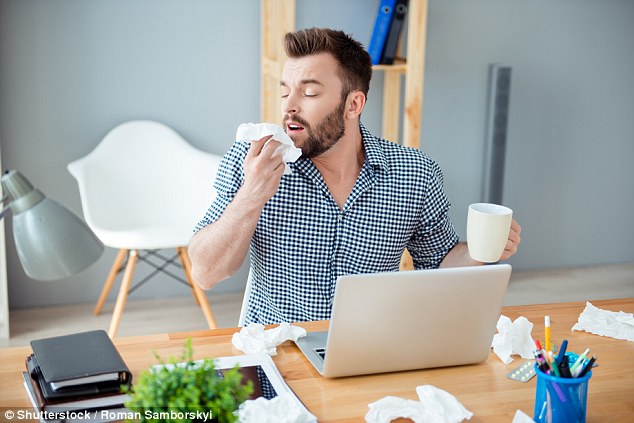 Two or three injections would give long-term protection against different strains, they say

The new vaccine is designed to home in on these common epitopes and help the immune system create antibodies to fight them.

So far they’ve identified specific epitopes for two main types of flu — influenza A virus (subtypes H1 and H3) and influenza B. Researchers say a vaccine using this new approach could provide immunity without the need for yearly vaccinations, and could work against many types of flu even if the virus mutates.

Two or three injections would give long-term protection against different strains, they say.

Sunetra Gupta, a professor of theoretical epidemiology who led the research, says: ‘We believe our methods can be applied to produce vaccines against all subtypes of influenza, thereby providing the opportunity to develop not only a more effective vaccine against endemic influenza, with lower healthcare costs, but also better protection against potential influenza pandemics.

‘The same strategy can also be used to produce vaccines for swine and avian influenza, which will have significant economic consequences, and the control of which will reduce the probability of new lineages emerging with pandemic potential.’

Vaccination is the most effective way to protect against the virus and is given annually in the UK to people at risk, including the over-65s, children aged two to nine, pregnant women, and people in long-stay residential care homes.

But the problem with existing vaccines is that the flu virus frequently mutates in two ways.

The first, known as antigenic drift, involves small changes in the genes of influenza viruses as the virus replicates.

These small genetic changes usually produce viruses that are closely related to one another, and share the same antigenic properties, so an immune system exposed to a similar virus will usually recognise it and respond.

But these small changes can accumulate over time and eventually the immune system may not recognise them and respond.

The less common route is antigenic shift — an abrupt, major change in the influenza A viruses, and most people have little or no protection against the new virus.

To ensure vaccines are available when needed, six months before the flu season, scientists try to predict the new strain. However, as the latest figures show, they don’t always get it right.

Commenting on the research, Professor Wendy Barclay, the Action Medical Research Chair in Virology at Imperial College London, says: ‘There are lots of different ideas about how to make a universal flu vaccine and how universal it would actually be.

‘This work from the Oxford group would mean we don’t have to update the flu vaccine yearly, but if a new pandemic came along, chances are this type of vaccine wouldn’t work against that.

‘But it would mean we don’t have to chase after the virus as it constantly drifts and we try to keep up.’