Legendary Vogue editor Anna Wintour has managed to maintain her status as the fashion world’s most influential figure for more than four decades – despite her notoriously cold demeanor.

But the Covid-19 pandemic, along with the release of a scathing new memoir by her former friend and right-hand man Andre Leon Talley, might be what it takes to call time on her career, critics say.

Wintour appears to be struggling to adapt to life under the current health crisis, which has rocked every corner of the fashion and entertainment industry – among others.

At the height of the outbreak, a New York Times article reported Wintour had shrugged off the threat of the virus telling her staff ‘This is not a big deal’, and laughed at those who were sheltering at home.

Anna Wintour’s career has been recently put under a microscope ahead of the release of former Vogue editor Andre Leon Talley’s new memoir. The pair are pictured together in 2013 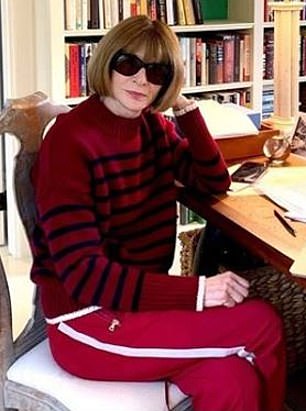 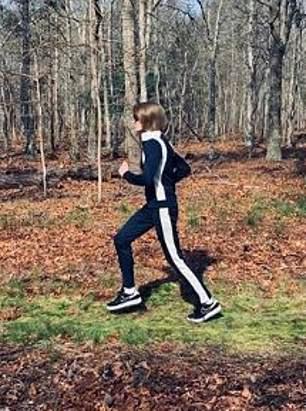 Wintour, 70, has been documenting her time at home on social media, recently sharing that she has taken up running (right)

The coronavirus then dealt Wintour her first blow in March when she was forced to cancel the biggest night of the year for the fashion world, the Met Gala, for the first time in 25 years.

The 70-year-old artistic director for Condé Nast has since been documenting her time in quarantine, recently sharing on social media that she has taken up running during lockdown.

In a recent New York Post column, journalist Maureen Callahan has also pointed out Wintour’s rather, interesting, and unlikely, projects she has launched during lockdown in a bid to keep her brand and industry alive.

Most recently, Vogue unveiled its new partnership with Amazon, ‘Common Threads: Vogue x Amazon Fashion’, a digital store where customers can buy luxury goods from independent designers – a deal Wintour would have likely turned her nose up to before. 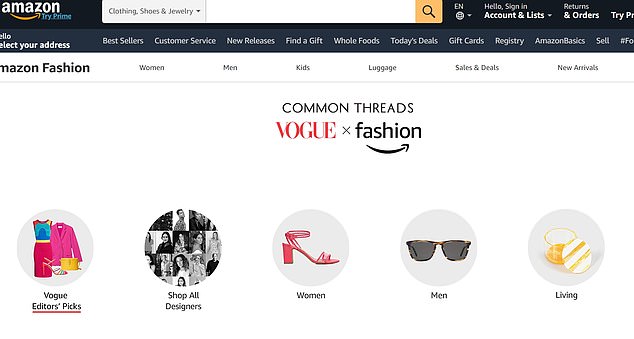 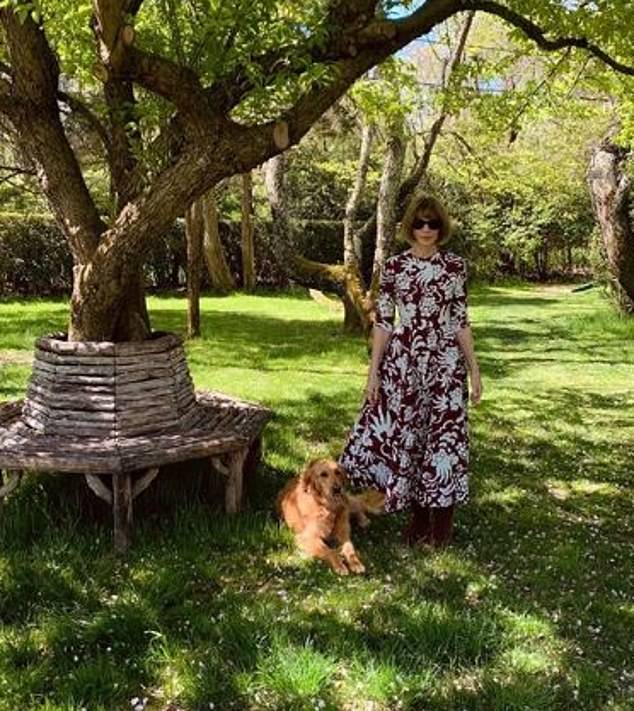 Wintour, 70, shared a photo with her dog at home on Instagram, as she documents her life in lockdown

‘So here is the new COVID-ready Wintour, posting photos of herself working from home in athleisure (one category soaring in sales as luxury brands plummet),’ she writes.

‘Here she is introducing ‘Vogue Global Conversations’ (online discussions with top designers), available to the great unwashed for free.

‘Here she is partnering with Amazon, till now frozen out by luxury brands and niche designers, in a last-ditch attempt to save her dying industry.’

It doesn’t help that Vogue’s former editor-at-large Andre Leon Talley is also preparing to release a memoir in which he states he has ’emotional and psychological scars’ from his decades-long friendship with Wintour.

After excerpts of the book were published by news outlets, fashion designer Ralph Rucci unleashed his own tirade against the magazine queen on Instagram, describing her as ‘evil’, ‘destructive’ and ‘without substance’.

Rucci shared an old photograph that showed he and Talley together, before he wrote: ‘Now you DO REALIZE that a door, locked for years, out of fear of retribution for truth, has been OPENED WIDE.’

One of the biggest nights in the fashion world, the Met Gala, was canceled this year due to the coronavirus pandemic

‘My dear friend and man of such vision, intelligence, and hurt [Talley] has spoken forth regarding the British woman who works at Vogue [Wintour]’.

‘I am proud of him for taking this step because there has been so much personal evil and destruction, and now perhaps others will feel safe to speak.’

Rucci then spectacularly claimed that he had been speaking with Talley, and the pair have ’emailed and photographed proof’ of their ‘evil memories’ of Wintour.

The designer further alleged that ‘many, many [other] people’ have spoken poorly about the Vogue editor.

‘I will write about what I had to contend with concerning this very, very meaningless person who deeply knew that she had no substance to exist in the realms of [previous Vogue editors and employees] Snow, Vreeland, Mirabella, Orton, Weir, and thus she had to ice berg her self to float through the sea,’ Rucci wrote on Instagram.

He then accused Wintour of operating with a ‘satanic plan’, before tartly writing: ‘ It’s a severe injury to the brain to realize that we have tolerated this mediocrity in our metier for almost four decades.’

In excerpts of his soon-to-be published autobiography – obtained exclusively by DailyMail.com last month – Talley claims he has been left with ‘huge emotional and psychological scars’ from his relationship with Wintour, who he describes as ‘incapable of human kindness’.

Talley claims there is an ‘endless’ list of writers, stylists and models who she has cast onto a ‘frayed and tattered heap during her powerful rule’.

In a scorching passage Talley, 70, writes: ‘She is immune to anyone other than the powerful and famous people who populate the pages of Vogue. 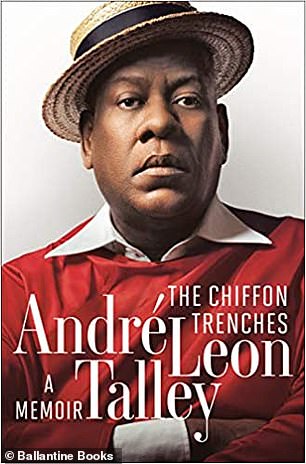 The 70-year-old describes being frozen out by Wintour last year because he was ‘too old, too overweight, too uncool’ for her, he writes in his new memoir The Chiffon Trenches: A Memoir, which is out in September

Talley’s dismissal from the court of the woman known as ‘Nuclear Wintour’ was all the more bitter because they were so close – and she made his career.

When they were at their closest he was one of the few dozen people invited to her wedding and she staged an intervention because his weight got out of control.

Talley writes that when he started out in fashion journalism and Wintour was creative director at Vogue she became a ‘powerful ally’ of his.

When Wintour left the US to become editor of British Vogue, Talley became style editor of Vanity Fair under Tina Brown.

Wintour hired him back when she returned to America as editor of Home & Garden magazine and brought him with her to Vogue when she became its editor in 1988.

Wintour gave Talley her old job of creative director which made him the highest ranking black man in the history of fashion journalism and the most important male fashion writer.

By that point he was already fast friends with designers like Yves Saint Laurent and Karl Lagerfeld, who would become a close friend until they fell out as well. 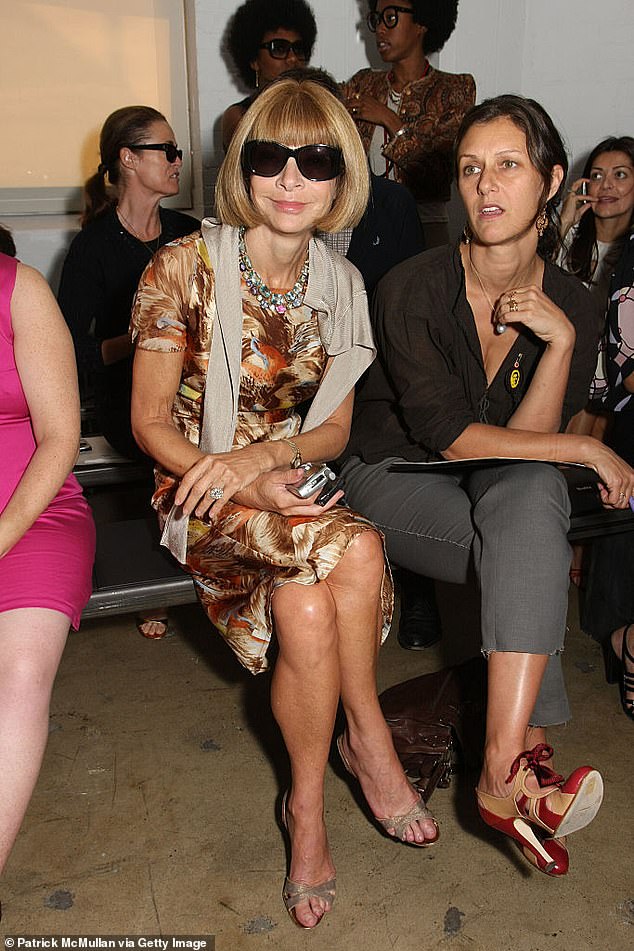 The coronavirus pandemic dealt Anna Wintour her first blow in March when she was forced to cancel the Met Gala for the first time in 25 years.

But his new job gave him an unprecedented level of prestige and respect at a time when Vogue was even more powerful than it is today.

Talley writes that there was no transition period when Wintour took over, just ‘bullet speed and lightning bolts ahead’.

Meetings were over in eight minutes and if they went on longer than 15 minutes something had gone ‘seriously wrong’.

The first time he tried to have lunch with Wintour she announced ‘let’s go back to the office’ before the first course had arrived.

He also claimed Wintour had ‘decimated me with this silent treatment so many times’ and ‘this is just the way she resolves any issue’.

Talley spoke with Graydon Carter, the former editor of Vanity Fair, and discovered he wasn’t alone.

Carter supposedly said of Wintour: ‘One day she treats me like a good friend and a colleague, and the next day, she treats me as if she had just handed over her keys to an unknown parking valet.’