Could kombucha be healthy alternative to wine?

It’s the much-hyped wellness drink that is often spruiked as promoting a range of health benefits – everything from preventing cancer and heart disease to boosting the immune system.

Now kombucha – the trendy beverage made by fermenting sweetened tea with a culture of bacteria and yeast, known as a scoby – has been tipped as the ideal tipple to replace a cheeky glass of wine.

Giving the low-down on kombucha on its website, Australian consumer advocacy group Choice revealed how the drink’s minimal alcohol content can be a ‘drawcard’ for some.

‘The non-alcoholic options can be limited in pubs and bars and I can’t stand drinking soft drink and juice and there is only so many glasses of sparkling water you can enjoy.’

While some alcohol does remain in kombucha after the fermentation process, it is usually only in trace amounts.

According to the consumer group, kombucha’s tart, lightly acidic flavour and palate-cleansing properties make it a drink that readily complements food, much like wine.

‘We have both reduced at-home alcohol consumption (wine) significantly and enjoy mostly fresh fruit steeped infusions… It seems to go very well with food,’ another enthusiast told the site. 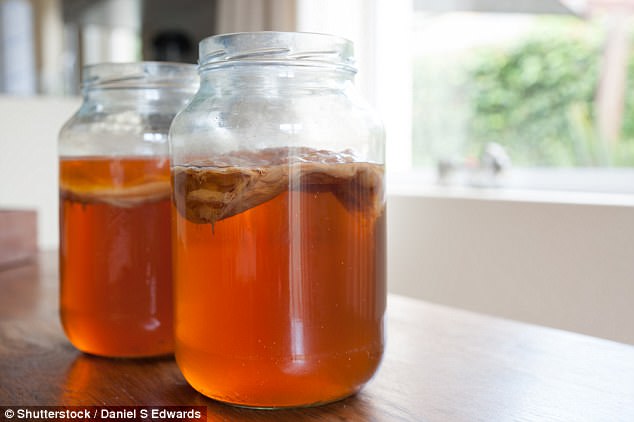 While some alcohol does remain in kombucha after the fermentation process, it is usually only in trace amounts (stock image)

CHOICE’S TIPS FOR WHAT TO LOOK FOR IN KOMBUCHA

Choice shared its top tips for what to look out for in a kombucha drink.

Is it made from a scoby? One way to check is to look for floaty bits, which are likely to be parts of the live culture. The words ‘kombucha extract’ on an ingredients list puts a question mark over how traditional its recipe is.

Does it need to be refrigerated? Refrigeration prevents further fermentation, which can affect the taste and produce more alcohol. If the kombucha you buy doesn’t require refrigeration it may have been pasteurised… and will likely have fewer active microorganisms as a result.

Does it contain added sweeteners? One of the core ingredients needed to make kombucha is sugar, but this is largely used up during fermentation. But some products Choice came across contained added sweeteners.

But is it actually good for you?

A poll conducted by the organisation revealed that 79 per cent of people said they drank kombucha for its health benefits.

But CSIRO senior research scientist Dr Michael Conlon, who specialises in diet and gut health, told Choice that the health potential of probiotics varies, depending on a number of factors.

‘It’s likely the number of microbes in kombucha would be much lower than what you might see in a commercial probiotic product,’ he said.

He added that further research into its health benefits on humans was needed.

‘Kombucha may be touted as ‘an immortal health elixir’ – a ‘living superfood’ that’s ‘rich in antioxidants and acids’. And while the potential for beneficial health properties is evident, there’s no guarantee that these features directly translate into actual health benefits, or even that drinking it will ‘make you feel great’,’ the Choice report concluded.

‘And a claim that ‘it harmonises your body, mind and spirit’ is clearly puffery. 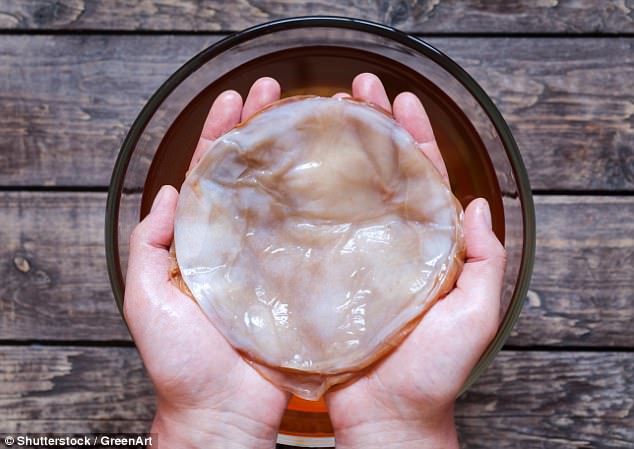 ‘But if you like the taste or you’re looking for an interesting alternative to alcohol or sugary soft drinks – and you don’t mind the price tag (about $9–13 per litre in the supermarket) – kombucha is definitely worth a look-in.’

The group noted that as kombucha is considered by Food Standards Australia New Zealand (FSANZ) to be a traditional food, it doesn’t require pre-approval and there are no specific quality controls or manufacturing practices for it, other than the general requirement under the Food Act that it be safe and suitable. 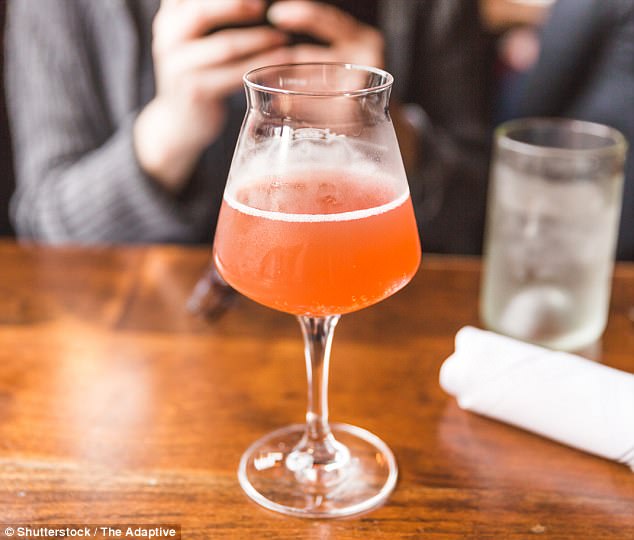 If you’re hooked on a daily soft drink or packet of crisps, the expert recommended you try switching it for some kombucha or fruit at 3pm.

‘Bacteria doesn’t thrive in foods that are high in sodium, so aim to eat foods with lower salt content to boost the number of good bacteria which make it to your gut,’ she said.

She added that Japanese and Korean foods are also a good food choice, ‘as they include fermented foods like kimchi and pickled vegetables which can help with digestion’.