Could the base rate cut usher in a wave of cheaper fixed-rate mortgages?

With the emergency base rate cut, a Budget and markets crashing amidst the escalating coronavirus crisis, many will be worried about how this chaos will hit their finances.

In theory, mortgage holders with tracker deals and most of those on standard variable rates and discount rates should see a slight reduction in their monthly bills as a result of the Bank of England’s emergency action on interest rates.

Fixed-rate borrowers won’t see any change for the time being – but  many would think that a 0.5 per cent cut to the base rate would usher in a wave of new cheaper deals.

Unfortunately, despite having access themselves to cheaper money thanks to the base rate cut, lenders may not pass all of the benefit onto borrowers – and may be too worried about the prospects for themselves and the housing market to continue the mortgage price war.

Nationwide put up its two-year tracker rates for new borrowers by 0.15 per cent this week

The Bank’s base rate – officially called the bank rate – determines what it pays to Britain’s banks when they hold money with it.

In turn, this can affect how much those banks pay savers or charge borrowers, be they taking out credit cards, personal loans or mortgages.

Most lenders have now factored the cut into their ‘standard variable rates’ – the rate borrowers’ loans revert to once their fixed rate periods come to an end.

This means that those on SVRs as well as those on ‘discount’ mortgages, that offer a discount to their lender’s standard variable rate, should now see a reduction.

Despite this, new customers taking ‘tracker rate’ mortgages – deals where the rate is linked to the base rate directly – might not be feeling the full benefits of the cut, as lenders creep up these rates.

For example Nationwide has already raised rates on two-year trackers for new borrowers by 0.15 per cent, as first reported by trade magazine Mortgage Solutions.

This means new customers will only benefit from 0.35 per cent of the 0.50 base rate cut.

The building society said the reduction in base rate made the difference between its fixed rate deals and tracker deals too wide, so as a result, it put up rates on its tracker deals.

It has, however, passed on the full cut to existing tracker borrowers.

Scottish Widows Bank and Lloyds’ buy-to-let lender BM Solutions have also pulled their tracker deals, though existing customers will not be affected.

What about fixed rates?

These make up the majority of mortgage deals, and unlike trackers, aren’t directly pegged to base rate movement.

The traditional influence on fixed-rate mortgages over the past decade has been swap rates – the cost of obtaining fixed term funding on the money markets for lenders.

But mortgage lenders’ levels of confidence and their access to funding are equally important to rates.

The pick-up in the property market and the economy, along with a healthier outlook for banks and building societies, has boosted confidence in recent years.

However, in this time, high levels of competition in the market have pushed rates so low that lenders’ margins have been under severe pressure, and with the recent coronavirus outbreak, confidence will be plummeting. 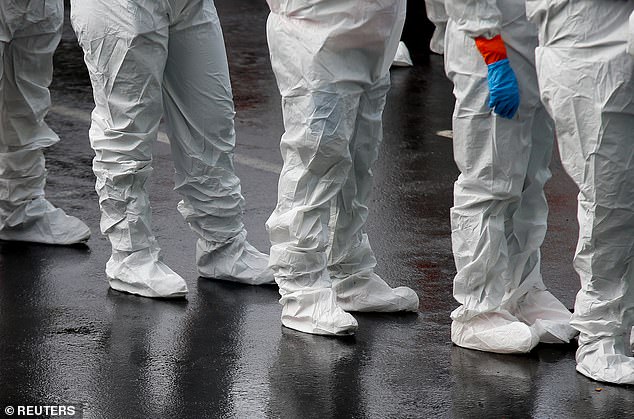 With the recent coronavirus outbreak, lenders’ confidence will be plummeting

David Hollingworth from broker L&C said: ‘Lender margins have been under severe pressure and I expect that many will want to take the chance to cling onto some of that margin.

‘However, over the coming weeks and months there may be a chance for more lenders to become more competitive if funding costs remain at lower levels.

‘That could allow more to get closer in price and compete against the big banks that have been dominating recently.

‘Borrowers shouldn’t hold off from taking action though, as paying a lender’s standard variable rate for a month or two more could easily outweigh any benefit if there is any improvements to what are already ultra low fixed rates.’

Another factor that will affect rates is how much of a financial hit lenders will take by offering support to customers and staff affected by the coronavirus outbreak.

A number of lenders have offered forbearance to borrowers whose income is affected by the outbreak.

Experts say that funding this move might ward off any rate cuts for the time being.

Kate Davies, director of the Intermediary Mortgage Lenders Association, said: ‘We know that a number of lenders have specifically said they will offer forbearance to borrowers whose income is affected by the outbreak – and that “forbearance” will have to be funded somehow.

‘We know that margins are very tight at the moment, so a reduced rate makes room for manoeuvre even smaller.

‘Lenders which are also deposit-takers such as building societies and to a lesser extent banks will also not want to clobber their savers even more, at a time when the stock market has got the jitters and people are feeling nervous about their savings.

‘So given that the small cuts that might be made probably won’t make a huge amount of difference to borrowers’ regular repayments, I’m not sure you’ll see a rush to tweak rates just now.’ 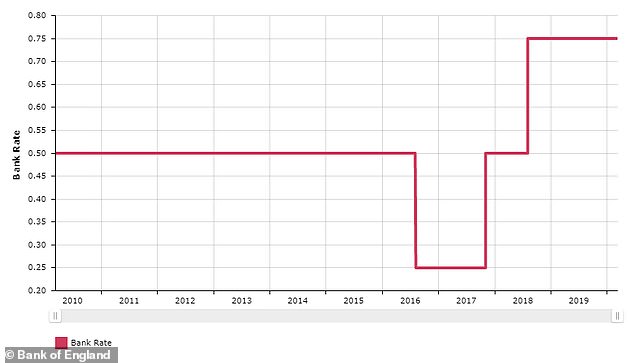 The Bank of England’s drastic rate cut marks the first time since 2016 that rates have been cut, and the first emergency cut since the 2008 financial crisis (here is a graph without the recent cut)

Andrew Montlake from broker Coreco said: ‘Yet again we find ourselves in unprecedented times.

‘Some lenders may choose not to change at all and to use this to help bolster reserves to support themselves and potentially customers affected by the coronavirus during the crisis.

‘We could also even see some lenders increase rates slightly as they price in the fact that their own staff levels may be low in the weeks and months ahead and they may not be able to cope with any increased demand and want to reduce the amount of applications coming through their doors.’

You can keep up with the latest mortgage deals with This is Money and L&Cs mortgage finder tool by clicking here.

How will the Bank’s cut affect my monthly bill?

A 0.5 per cent cut doesn’t seem like much, but assuming the full cut is passed onto borrowers it can add up to quite a bit.

For example, a tracker mortgage that tracks base rate plus 1.5 per cent would now be cut from 2.25 per cent to 1.75 per cent.

Over the life of the mortgage it would result in tens of thousands of pounds of saved interest.

This is assuming the base rate stays the same, which it won’t, but gives an indication of the type of impact a cut like this can have.

If your mortgage is a discount to your lender’s SVR, if they have cut their SVR it will have the same affect as the example above.