The Countess of Wessex was all smiles as she stroked a horse shortly after arriving at an agricultural show in Norfolk on Tuesday.

Sophie, 54, opened the Norfolk County Show as part of her duties as 2019’s President of the Royal Norfolk Agricultural Association.

She donned a colourful ensemble for the occasion, pairing a bright red jacket with a floral blue skirt and a cream silk blouse.

The royal completed her outfit with a pair of stylish espadrilles that tied around the ankle and held a beige band in her right hand.

The Countess of Wessex (pictured), 54, arrived bright and early at the Royal Norfolk Show on Tuesday 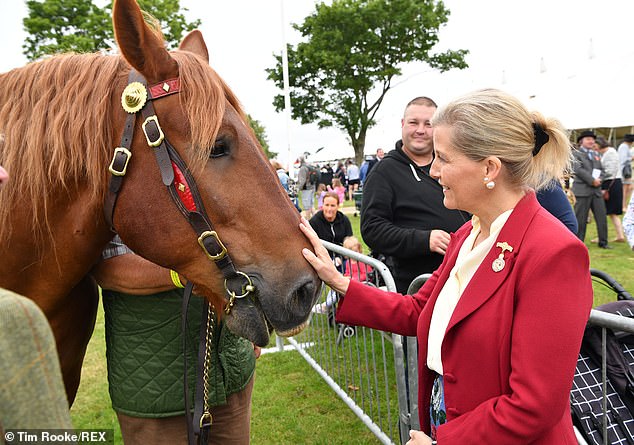 Sophie was all smiles as she petted a horse at the event, while onlookers peered on from behind a fence (pictured)

The mother-of-two – who has two children Lady Louise Windsor, 15, and James, Viscount Severn, 11 with husband Prince Edward, 55 – proudly wore her presidential pin on the left side of her jacket as she made her way around the event.

Her blonde locks were neatly tied back with a black hairpin to show off her statement pearl earrings.

As President of the association, Sophie will take part in several of the event’s presentations and activities throughout the day.

The 54-year-old also got the chance to meet one of the pigs on show, whom she gently stroked on the back. 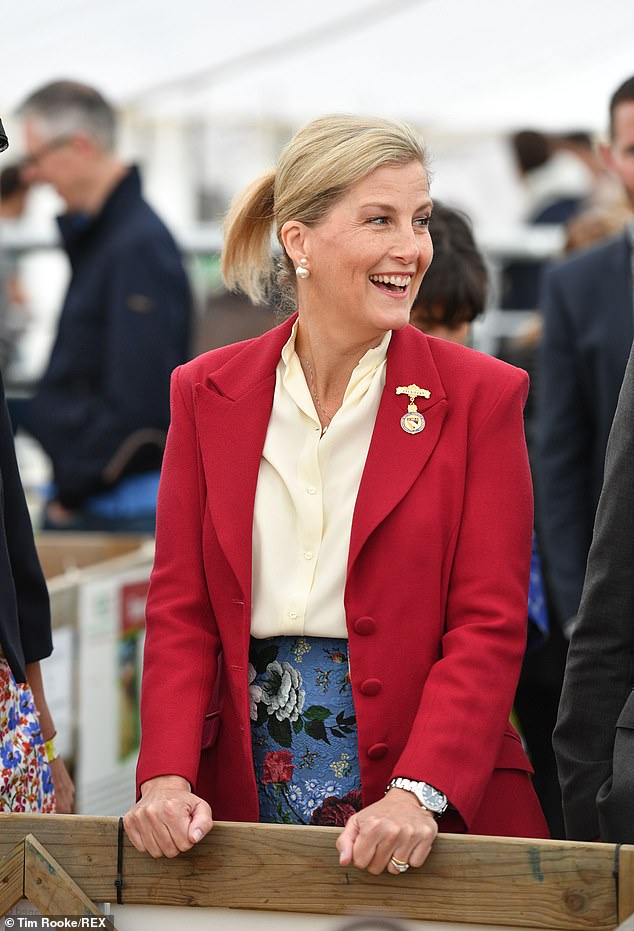 The mother-of-two (pictured), who is this year’s President of the Royal Norfolk Agricultural Association, seemed in great spirits this morning 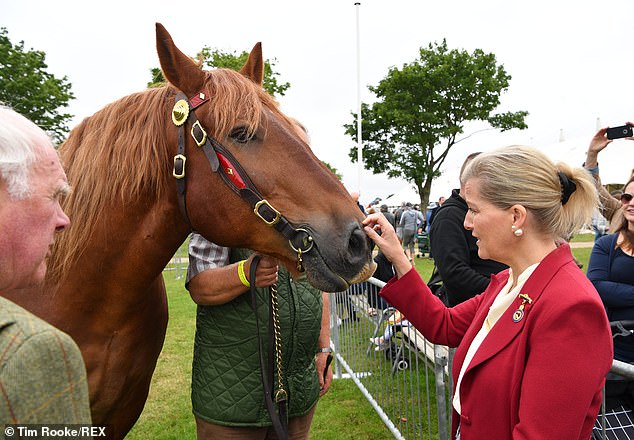 Later, she sampled some of the gin on offer at the show and talked with some of the distillery’s staff.

‘This year will see a wonderful mix of food, farming and countryside with another impressive Grand Ring and entertainment line-up,’ said James Hill, the RNAA’s new Show Director.

‘Once again, we will celebrate the very best the county has to offer, from showcasing the best in agriculture in our community, to welcoming some of the finest animals, competitors, farmers, musicians, horticulturalists, producers and artists from across the county.’

He added: ‘Entries across all classes of livestock and equine are particularly strong and trade stand bookings are almost full. Visitors’ tickets are available now with free parking if purchased online. 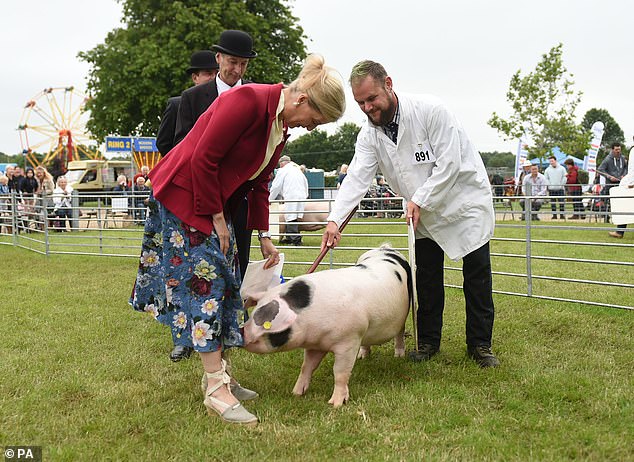 Sophie seemed excited to meet a friendly pig, which she gently stroked, during her visit at the Norfolk Show this morning (pictured) 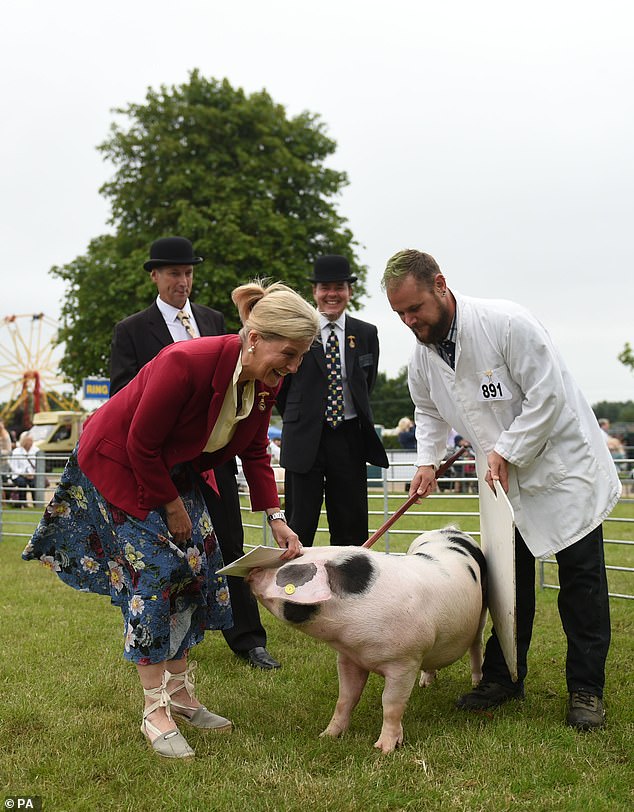 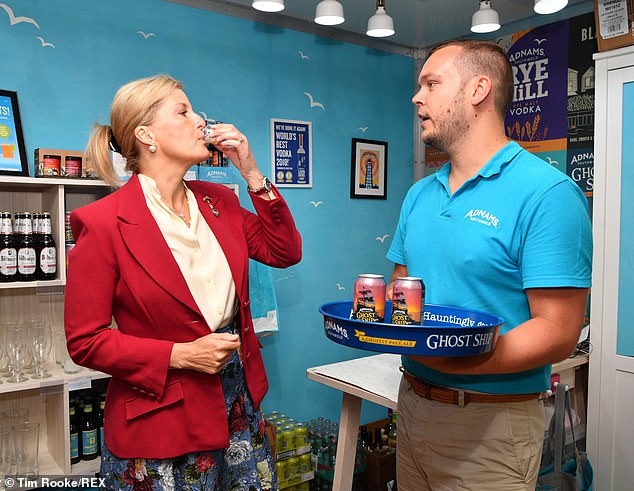 The 54-year-old sampled some beer from the Adnams brewery, which is on show at the agricultural event (pictured) 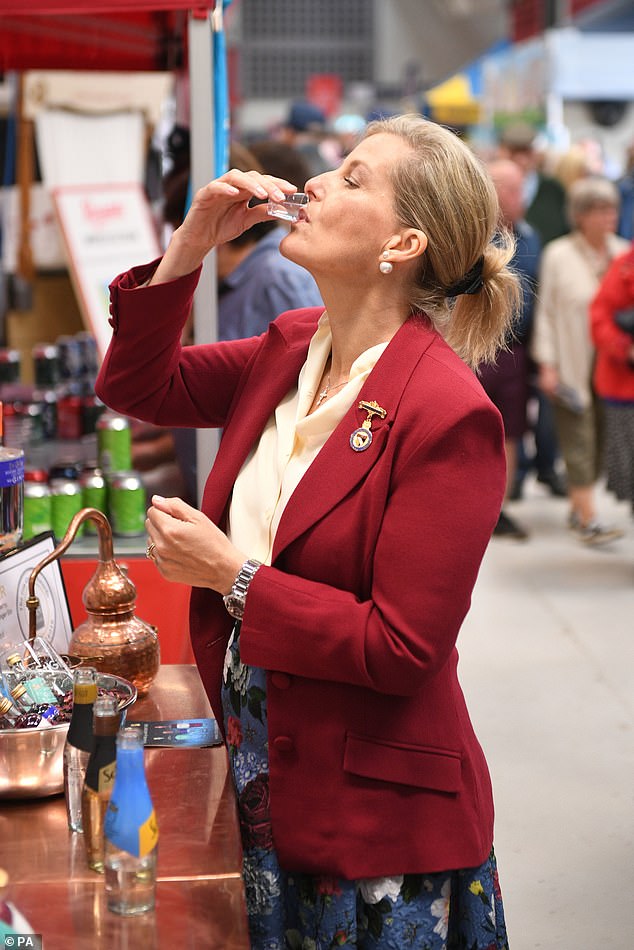 Sophie’s husband the Earl of Wessex, was the Association’s president in 2014.

As many as 14 members of the royal family have held the owner since its first edition in 1847.

The event usually takes place for two days on the 26th week of the year, traditionally starting on the Wednesday.

Organisers are expecting 80,000 visitors for this year’s edition. The Queen is the charity’s Royal Patron. 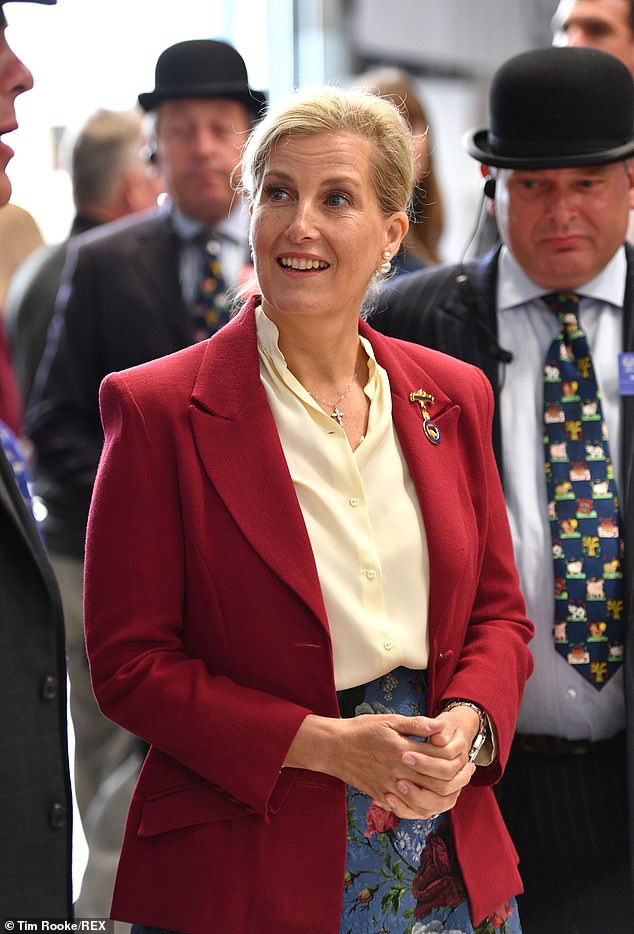 The Countess, who proudly wore her presidential pin on the left side of her jacket, listened carefully as she made her way around the different displays 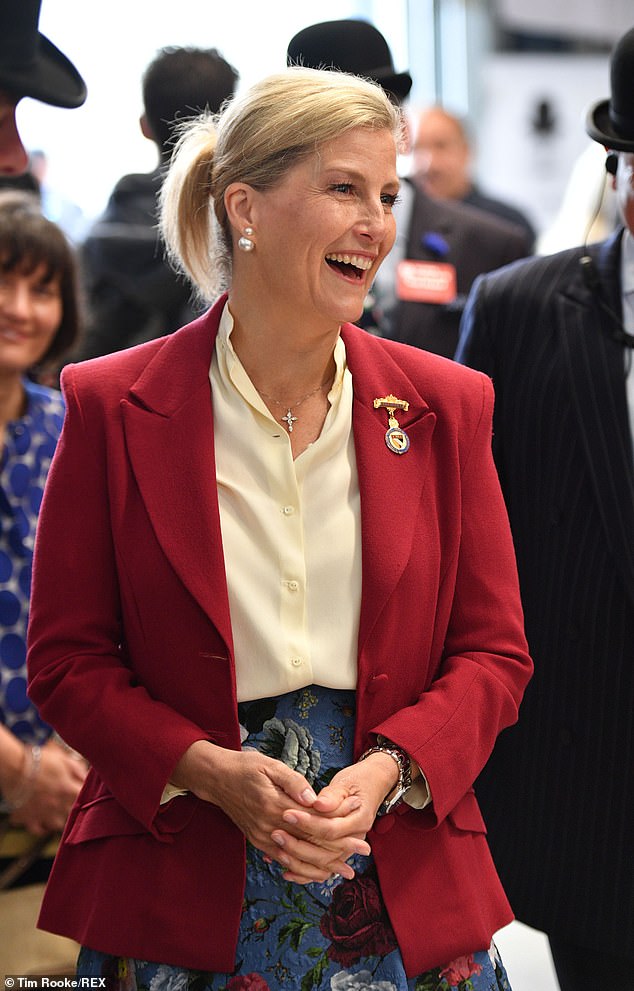 Along with the pin she was given for being the President of the Royal Norfolk Agricultural Association (pictured), the royal donned a silver cross necklace and pearl earrings 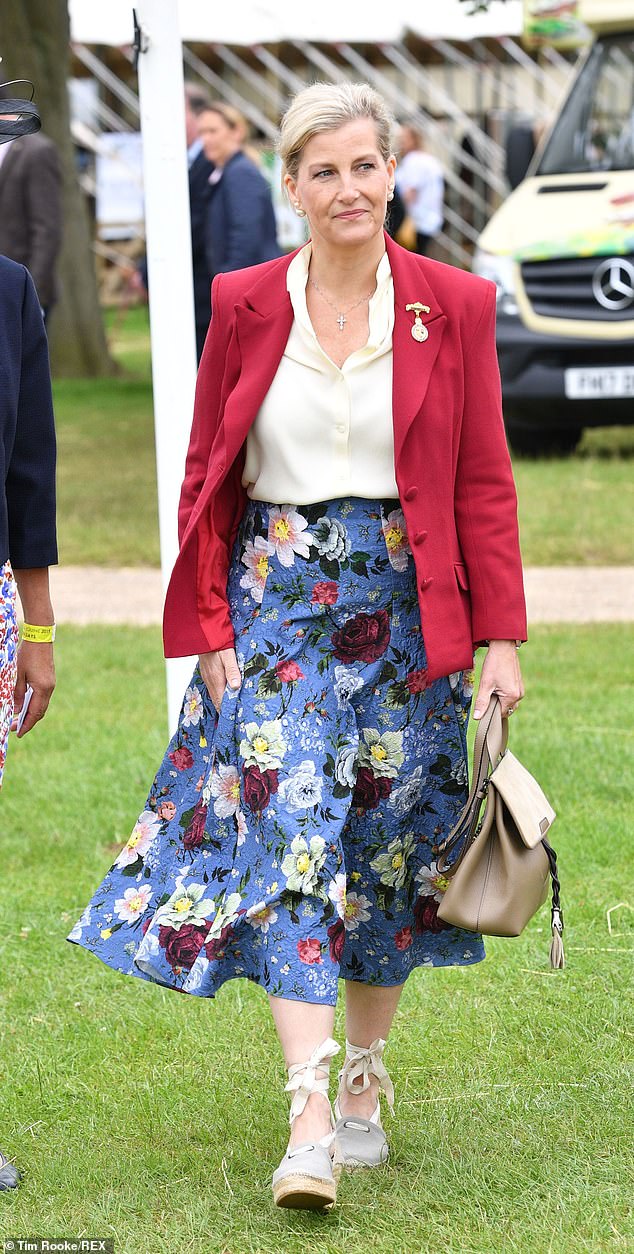 Stylish: For the occasion, Sophie wore a bright red jacket with a blue floral skirt. She accessorised with espadrilles and a beige bag (pictured) 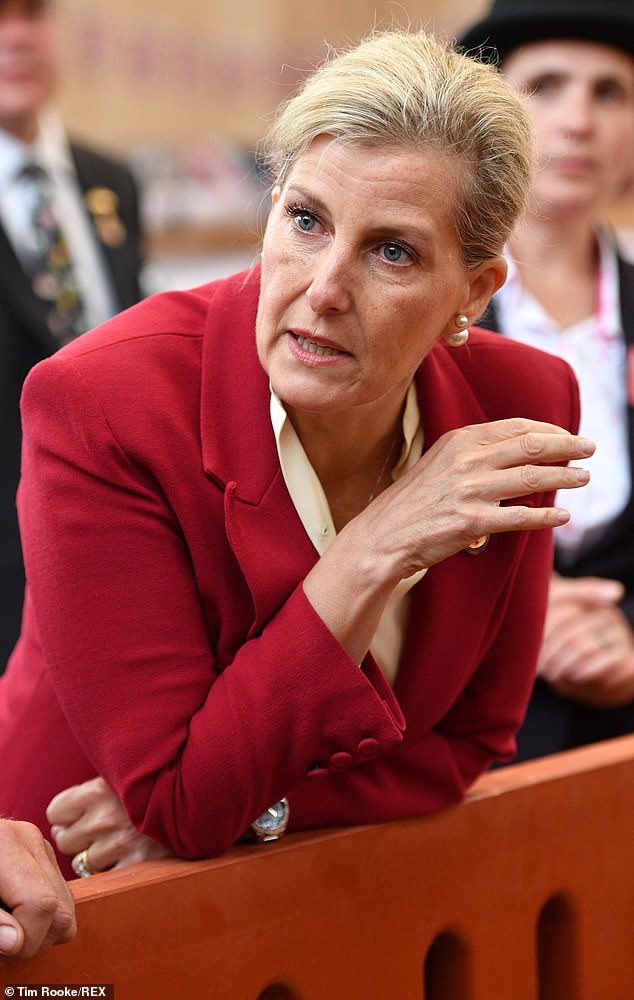