Shares in the publisher behind Country Life surged to a 21-year high as the firm snapped up another raft of titles for £300m.

Future, which also owns football magazine FourFour Two and technology magazine Techradar, said it was buying the Dennis business from private equity company Exponent. Dennis includes the UK and US versions of The Week and The Week Junior, as well as Money Week, Kiplinger, Science & Nature, IT Pro, Computer Active, PC Pro, Minecraft World and Coach.

Future said the titles are ‘highly complementary’ to its existing business. They will increase its reach into North America and bring in extra revenues from subscriptions. Shares in the British company leapt 5 per cent, or 184p, to 3870p after the announcement.

Zillah Byng-Thorne, Future’s chief executive, said: ‘I look forward to welcoming our new colleagues, and to continuing the successful execution of our strategy.’

The acquisition excludes four Dennis magazine titles – Viz, Fortean Times, Cyclist and Expert Reviews – which will stay with Exponent. It is the latest in a string of takeovers under Byng-Thorne.

Future bought the publisher of Country Life and Women’s Weekly for £140m in 2019 and then price comparison website Gocompare the following year for £594m. The firm said Dennis was particularly attractive because most of its revenues come from subscriptions, and 56 per cent come from the US.

Through its magazines and websites, which range from Country Life to Cycling Weekly and Classic Rock, Future already reaches one in three people in the UK and US. But it wants to expand this while also growing the number of titles it can sell advertising and subscriptions through.

It comes after Future previously revealed that profits in the first half, covering the six months to March 31, had doubled to £89m. The firm’s performance under Byng-Thorne, who became chief executive in April 2014, has seen its shares rocket around 4,600 per cent higher, while she has bagged total pay of £26.8m. 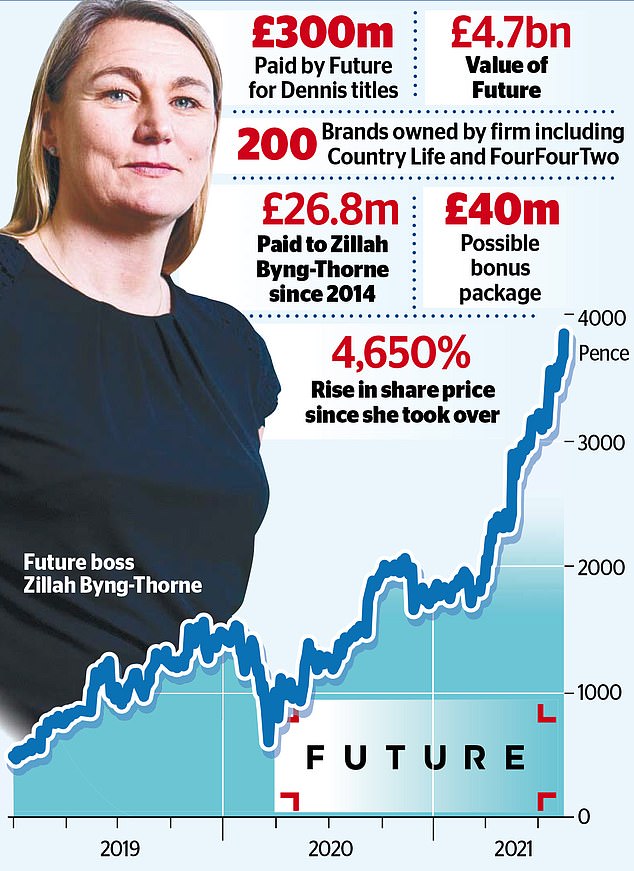 And under a lucrative bonus scheme, the 46-year-old could bag another £40m – if she hits certain targets. The bonus would pay out in three tranches of around £13.6m, starting from 2023. However, it triggered an investor revolt earlier this year after investor advisory groups claimed it had not been properly justified.

Byng-Thorne is also a non-executive director of e-commerce giant The Hut Group and sold shares worth £1.4m last week. Future has found success by marshalling its collection of magazines and websites on to shared technology platforms.

This makes it easier to sell ads across the business and means the publications can share back office costs. Many also share content and make increasing amounts of cash by reviewing products such as digital devices before showing users where to buy them – bagging Future additional referral fees from sellers such as Amazon.

Analysts at broker Peel Hunt yesterday said the deal to buy Dennis would bring with it more expertise in using paywalls – meaning Future may be able to improve how much money it makes from subscriptions.