The brave mother-of-three, 39, was first told she had the disease in 2018 but a check up in the last few weeks revealed that it has now spread and is ‘growing up her back’.

Criscilla said that news marked her ‘darkest ever day’ but has revealed she is determined to see her three young children grow up – despite doctors saying they ‘don’t know’ whether she will be alive in five years.

Criscilla, a professional dancer who has worked with Britney Spears and Rihanna, said her thoughts were also focused on husband Coffey, who lost his own mother to lung cancer when he was just 10-years-old.

She added: ‘I thought about my husband. His mom died when he was 10-years-old from lung cancer. Why would this be happening to him again?’

Coffey Anderson’s wife Criscilla has spoken about the devastating moment doctors revealed her colon cancer had spread. The couple are pictured on their wedding day in 2009 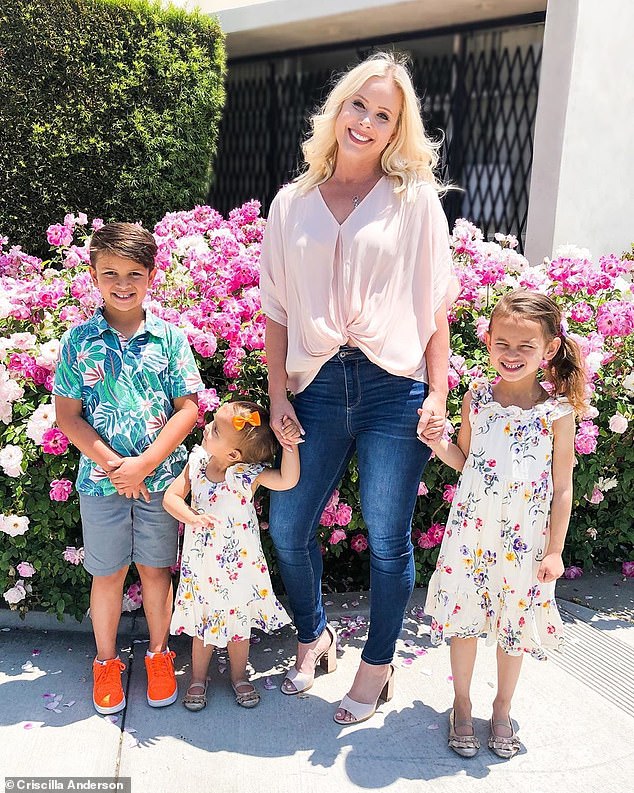 The couple, who live in California with their children Ethan, eight, Emmarie, six, and two-year-old Everleigh, met at church and began dating in 2008. They were married a year later.

‘So I’ve started researching what I can do. It’s become my 9-5 job to understand how I can get better.’

Doctors have told the couple Criscilla’s cancer is ‘treatable, but not curable’. 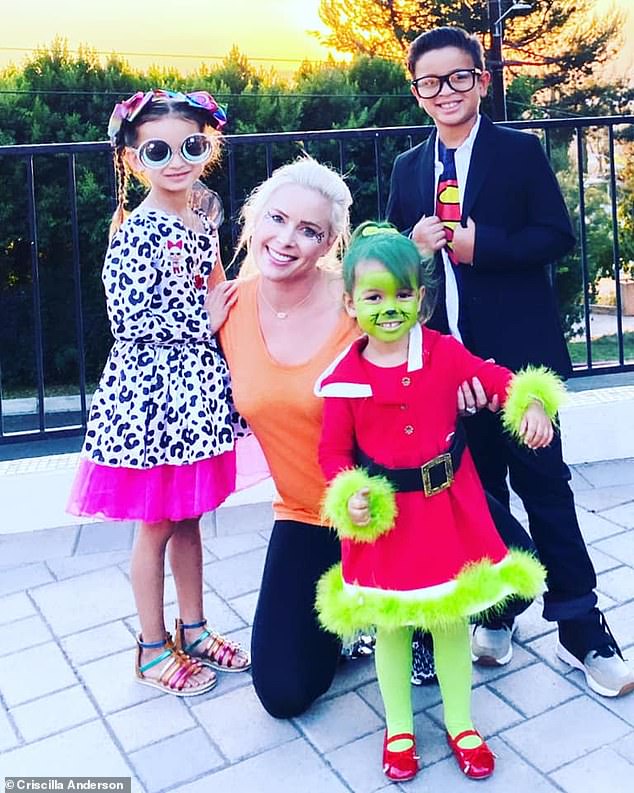 Criscilla said that news marked her ‘darkest ever day’ but has revealed she is determined to see her three young children grow up – despite doctors saying they ‘don’t know’ whether she will be alive in five years. She is pictured with her children over Halloween this year 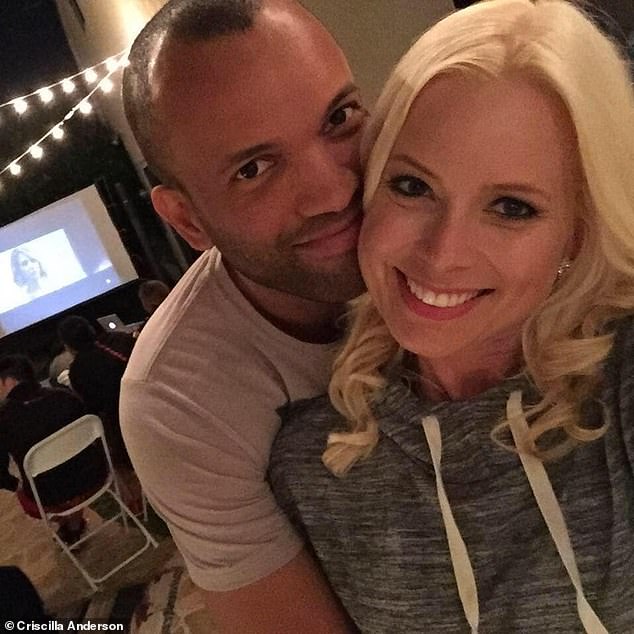 Criscilla, a professional dancer, said her thoughts following her diagnosis turned to her husband Coffey, who lost his own mother to lung cancer when he was just 10-years-old 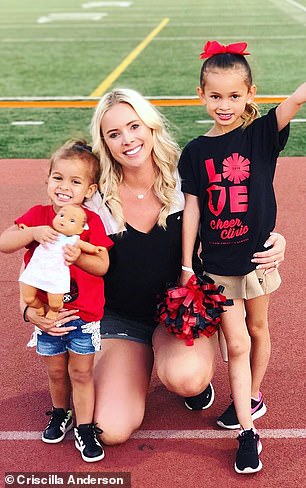 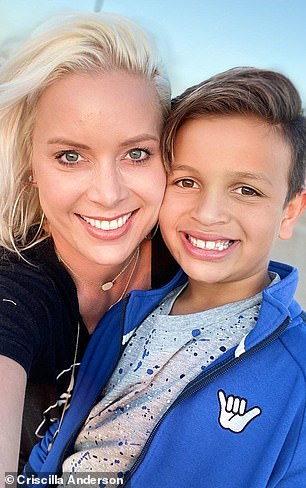 Criscilla, pictured with her children, is about to start three months of chemotherapy at City of Hope National Medical Center. She is also looking at alternatives medicines

Criscilla now says she is looking at both chemotherapy but also alternatives medicines.

She told DailyMail.com: ‘I want to watch my babies grow up. I want to be with them when they make mistakes and to help them through it. I want to see them graduate and fall in love and get married.

‘No one but God can decide when you are going to die. And so I am praying to God that I get this miracle.’

Coffey, 40, told People: ‘Life is not fair, but God is always good. When you say that you will be there for each other through thick and thin and through sickness and health, you have to mean it.’

Criscilla first began feeling ill in May last year. When she was eventually hospitalized with severe stomach pains doctors diagnosed her with colitis and she was given antibiotics.

But when the pain continued she ended up back in ER. When doctors tried to do an emergency colonoscopy they found a tumor. It was then she was told she had stage 3C colon cancer.

In a devastating Instagram video, left, Criscilla opens about the moment she was told her cancer had spread. Breaking down in tears she said: ‘It was really hard to hear the doctor say that he doesn’t think it’s curable. He thinks it’s treatable’. She is pictured with Coffey right 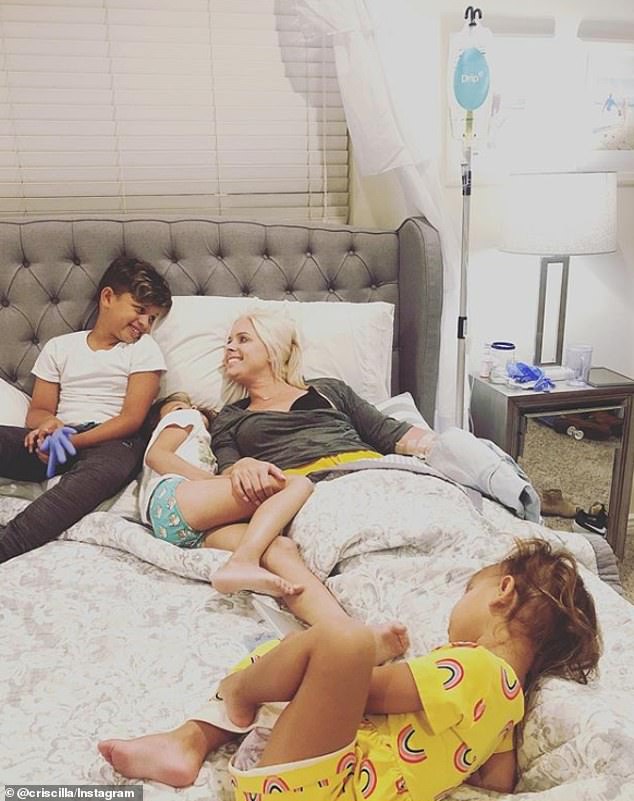 Criscilla said she initially tried to keep the shock news from her children but adds: ‘My eldest is eight, he is knows what is going on.

‘We are taking everything as a special moment together. This really gives you perspective on life.

‘We are trying the chemo for now and then natural remedies to keep it away. I am really taking a mixed approach to medicine and treatment.

‘My goal is to be cured. And if not to be cured to stay alive for many more years until I am old and grey.’

WHAT IS COLON CANCER?

Colon cancer is a cancer of the large intestine (the colon).

Usually, it starts with polyps, which are small clumps of cells.

Gastroenterologists can see them in a colonoscopy because they are raised off the surface of the colon like a mole.

People with stage 1 tumors have a survival rate (living five years or more) of 80-95 percent.