Countryfile’s Steve Brown, one of the judges in our wildlife photo contest, urges everyone to enter

Could you take a photo like this? Countryfile’s Steve Brown, one of the judges in the Weekend wildlife photography contest, urges everyone to enter

By Richard Barber For Weekend Magazine

When, aged 23, Steve Brown fell from a balcony and dislocated a neck vertebra, squashing the spinal cord, he couldn’t have dreamed he would end up presenting TV shows.

The accident left him with little or no level of movement below the breastbone, but he was determined not to be defined by his injury.

After taking up wheelchair rugby he was asked to commentate on the Invictus Games for the BBC, then worked for Channel 4 at the Rio Paralympics and has since presented on The One Show and Countryfile, where he can indulge his great passion for wildlife.

So he was delighted to be asked to join the judging panel for our annual wildlife photography contest, alongside our judge emeritus Sir David Suchet, Kelly Brook, TV zoologist Lucy Cooke and head judge Clare Balding, plus our two technical judges Gray Levett and Simon Stafford.

Clare launched the 2020 competition in April last year and we’ve already had a staggering number of entries, but because of the pandemic restrictions we’ve extended the closing date until 1 October this year.

The competition is open to all amateur photographers, who are asked to submit their images of native British wildlife in its natural habitat.

‘It’s educational about the environment as well as teaching the art of patience,’ says Steve (above). ‘In a world of instant gratification we can learn a lot from animals, and I urge everyone to get out and take some pictures of them.’

Steve, now 40, has loved wildlife since childhood, birds in particular. ‘My dad encouraged me to explore the great outdoors,’ he says.

‘Now I love it if I spot a hare or a stoat, but I’m in the car a lot and the only wildlife you normally see from the motorway are birds. It might be a kestrel or a red kite – and what a treat!’ 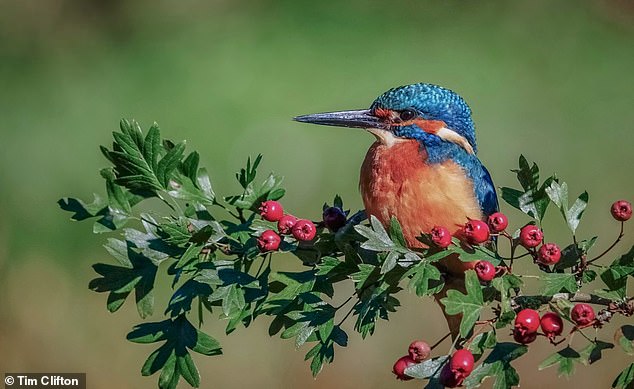 At school he told his careers adviser he wanted to be a wildlife presenter. ‘He as good as laughed in my face,’ says Steve. He’s had the last laugh though, filming up to three items a month for Countryfile, from husky-sledding in Scotland to endangered mud snails.

He studied photography at A-level and always carries an autofocus camera with him when he’s bird-watching. ‘But I don’t take photos of any quality because my hands don’t work very well since my accident.’

He does have his favourite birds though.

‘There’s a large population of marsh harriers at Elmley Marshes on the Isle of Sheppey in Kent. They have long legs and sharp talons and fly slow and low over the marshes looking for food, which gives you plenty of time to study them.’

He’s also a big fan of the green woodpecker.

‘I love the call and the noise they make. I once stayed in a house in a forest in France. My alarm call was the woodpeckers drilling the trees. I’d watch them fly – three flaps to gain height – and then cruise with their wings closed. Beautiful.’

And then there’s the skylark. ‘There’s so much to admire,’ he says.

‘They nest on the ground and work in pairs – one sits on the eggs, the other flies high to act as lookout. If they see a fox, say, they’ll fly a little lower and sing to tempt it away from the nest.

‘If that doesn’t work, they’ll feign injury by limping along and then fly off once the danger is past.’

He’s very enthusiastic about our wildlife photography competition. ‘How could I not be?’ he says. ‘My life changed in a moment but it didn’t change for the worse. It just changed direction.’