A couple will tomorrow say a heartbroken goodbye to the dream home they spent £250,000 renovating after losing a seven-year battle to stop it being bulldozed to make way for HS2.

Childhood sweethearts Anne and Ron Ryall said their seven bedroom farmhouse – estimated to be worth at least £1million – will be destroyed to make room for a concrete viaduct.

The government used a compulsory purchase order to buy their beloved Dews Farm, an idyllic green space in the Colne Valley of Harefield, west London, for a price the Ryalls claim was a ’20 per cent shortfall’.

But Mr Ryall said today ‘We’ve been treated terribly. People in our situation should not be put in that situation’. 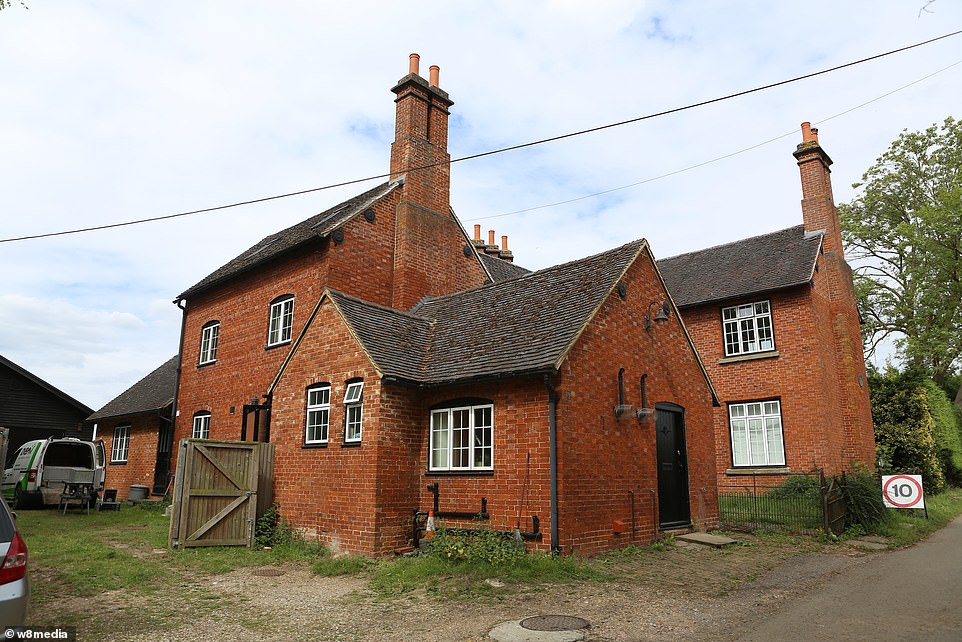 The Dews Farm property is believed to be worth £1million and will now be demolished, ending their dream of passing it on 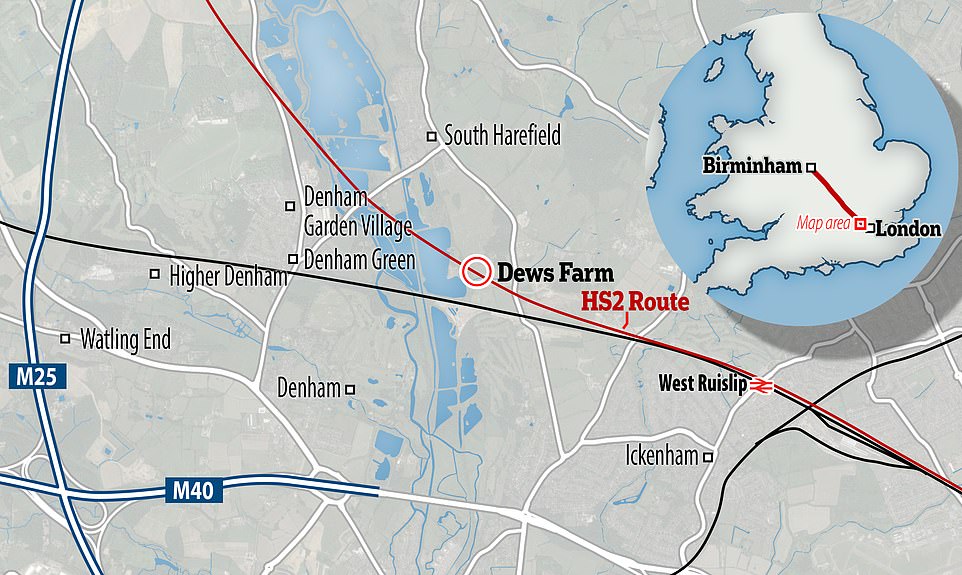 The HS2 route shown will go straight through where the Ryalls’ home currently stands in Harefield, west London

It is in the way of the route of the £106bn high speed railway which will initially go from Birmingham to London, before expanding up the country.

Still-working car mechanic Mr Ryall, who married Anne in their early 20s, said he has been dreaming of owning the home since he was a young boy.

He started renovating in 2003 while his aunt still lived there, completely redoing the rafters and retiling the roof. New electrics, plumbing and central heating were also installed and the rooms redone. 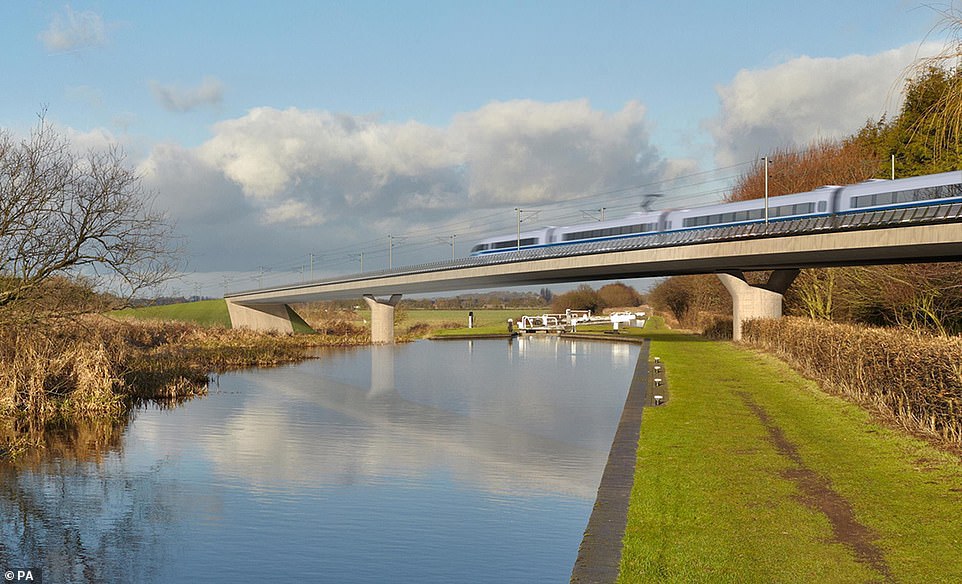 Mr Ryall told MailOnline: ‘We sacrificed nine to ten years of our lives to it, but it was our dream. I wanted something to hand on, on my demise, to my grandchildren.

‘They could sell it or if they wanted to live in it, they could as it’s big enough.

‘It ticked all of the boxes. There were no boxes left unticked. We were going to start on the gardens, but we just stopped when we were told we could lose it.

‘For seven years we’ve been trying to talk the government into letting us keep the house.

‘We had it valued prior to HS2 and they never came anywhere near the price. 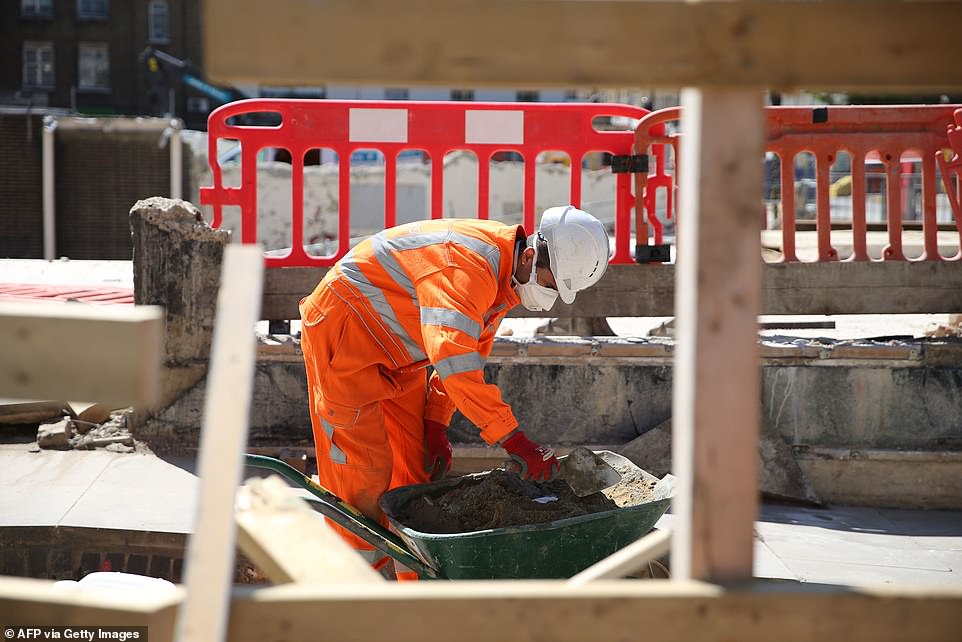 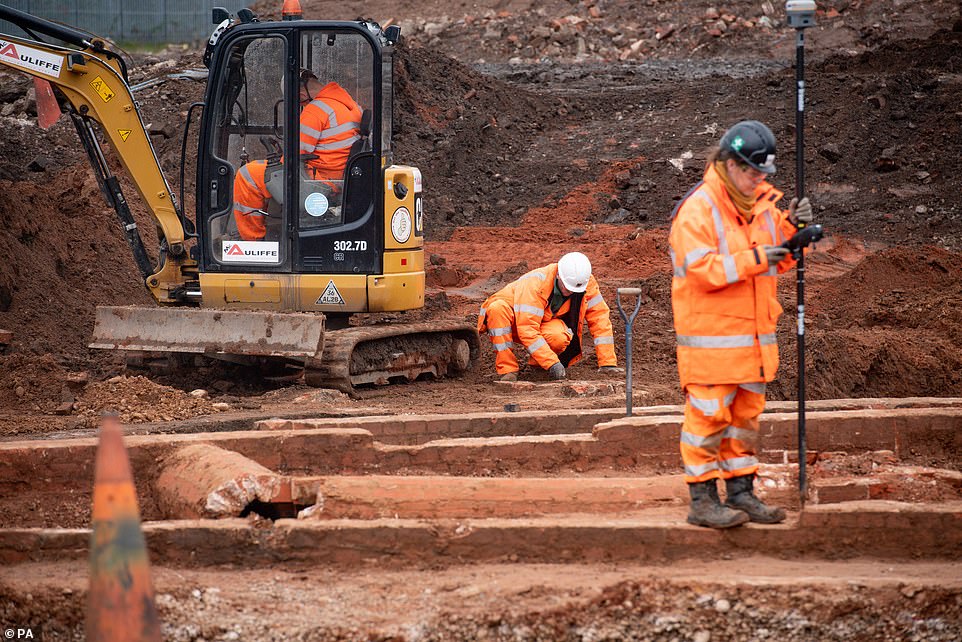 The site of the former Birmingham Curzon Street railway station, which was excavated for HS2 and found another building

‘The government never came anywhere near. Eighteen months ago we were within 40 per cent shortfall.

‘Since we’ve done some more negotiations, in my opinion, we’re still at a 20 per cent shortfall. At least we’ve managed to jack it up a little bit more.

‘I’ve had to buy another house. I’m moving from this to that but that’s all I can find in this area in the price I can afford.’

When his uncle died and his aunt looked like she would have to be put into a care home, he bought the Dews Farm property to ensure it was kept in the family

They were originally told to leave the house earlier this year, but the coronavirus pandemic meant they were allowed to stay until now.

He would not say how much money he received, but prices in the area for similar properties range in price from £700,000 to £1.6million.

The HS2 project has been dogged by criticism over its cost and impact on areas it is being built. 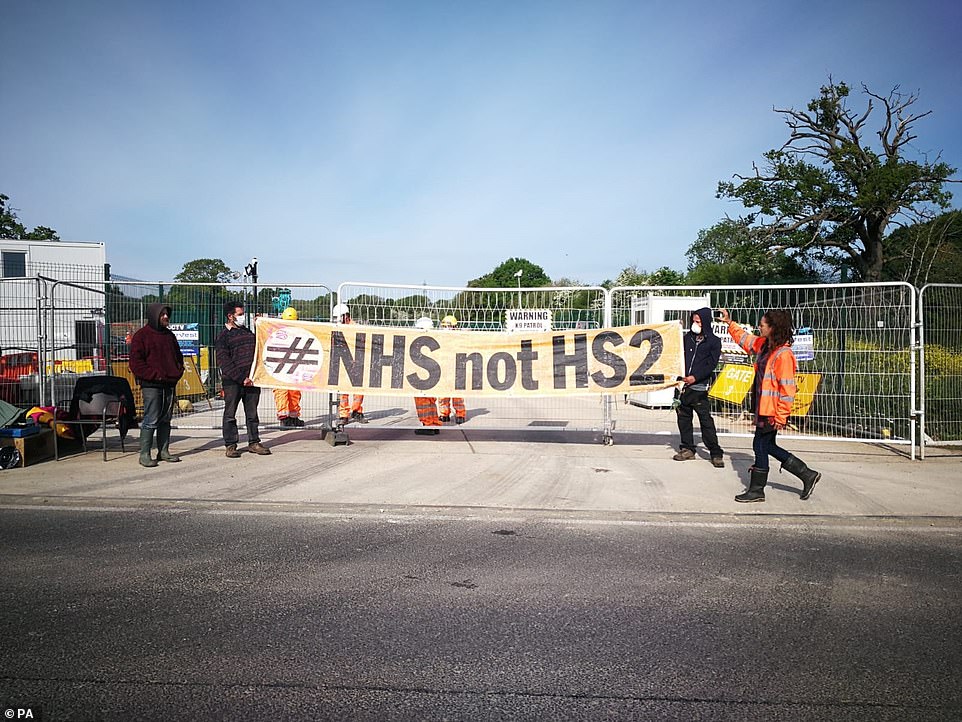 HS2 Rebellion protesters at the site in Colne Valley, near to where Dews Farm is situated, trying to halt the construction 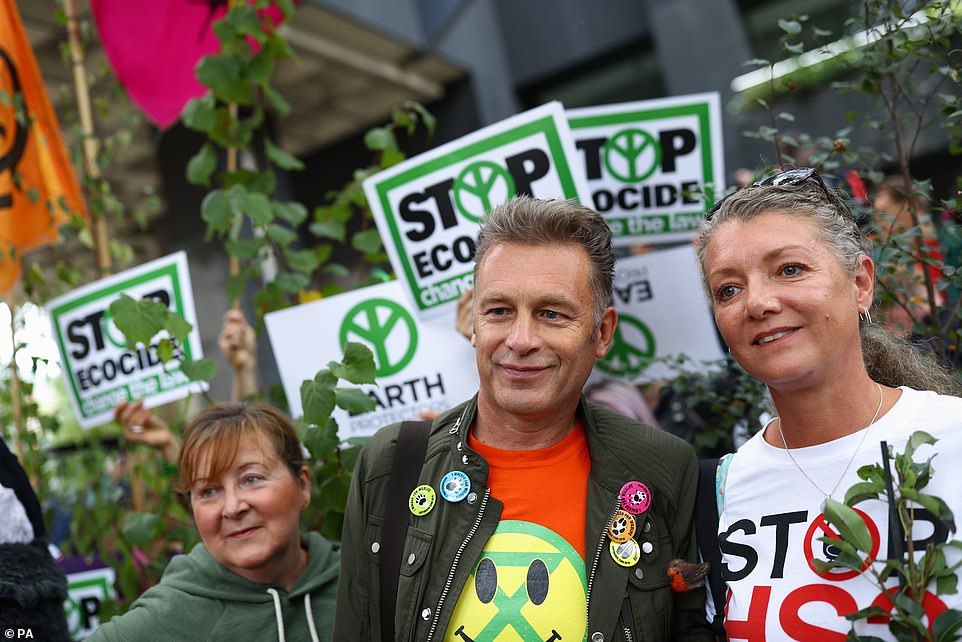 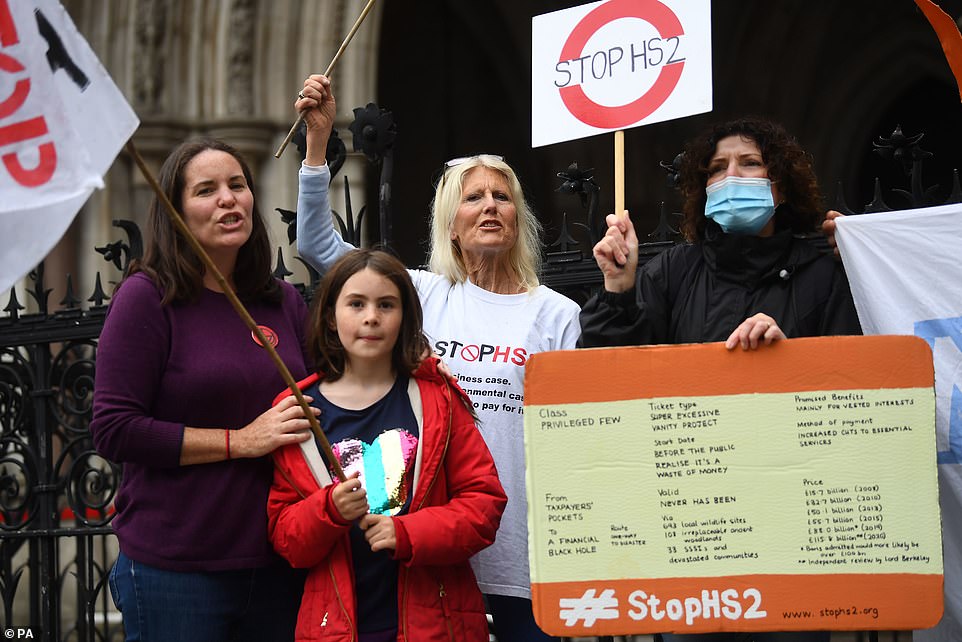 In April Chris Packham lost a High Court bid to prevent work on ancient woodlands as part of the HS2 project.

Colne Valley has also seen protesters camp over the rail scheme as have other areas, with some of the campaigns being led by Extinction Rebellion.

Mr Ryall said living in the farmhouse while work was being done on the high-speed railway in the area was like being in prison.

He said: ‘In 1952 I was running around in this house when I was a child. A farmer owned it. His wife was the heiress to Callard & Bowser confectionery.

‘She used to look like Queen Victoria and would give me a box of sweets if I went to go and fetched her a paper.’

‘Now we’ve got security people all over the place all the time. We’re fenced in. I’ve never been to prison, or behind bars, but I can sort of imagine what it’s like. 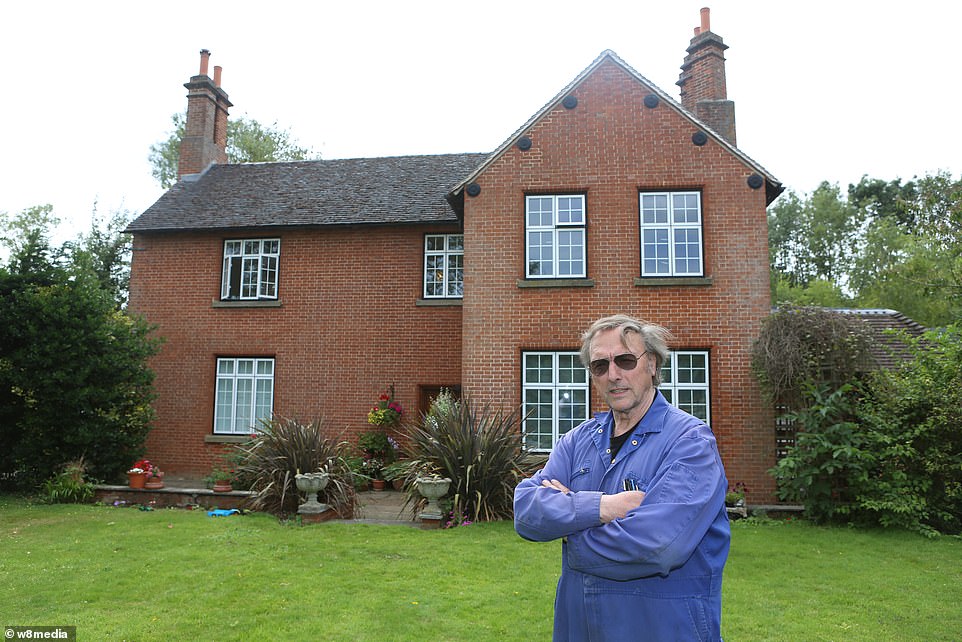 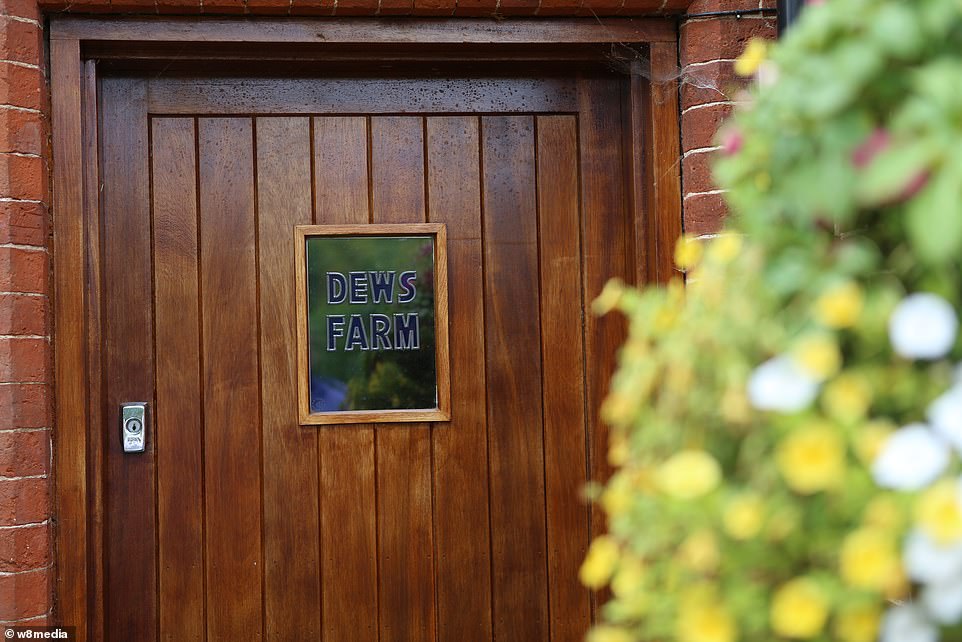 The front door to the home bearing the name of the property they spent £250,000 renovating will be removed tomorrow

‘It’s all of the time. My customers feel intimidated by the fencing and the security. I’ve lost 70 per cent of my business, easily. I could retire. I’m of retiring age if I wanted to. But I’ve never had anyone tell me what to do.’

Mr Ryall, and his 72-year-old wife, are waiting until tomorrow to finally move out of their dream home and into the two-bed bungalow a few hundred metres away.

He said: ‘It was a David and Goliath situation. You’re trying to fight something so massive.

‘It’s soul-destroying. My wife is distraught most days. She’s lost the home she’s always wanted, what we’ve worked all our lives for.

‘My five grandchildren can’t believe it. They say, grandad why are you selling the house? How do you explain to an 18 month or an eight year old that someone’s taking your home away?’

He added he had spent the last few weeks packing up 50 years of his life and moving it into the cottage. 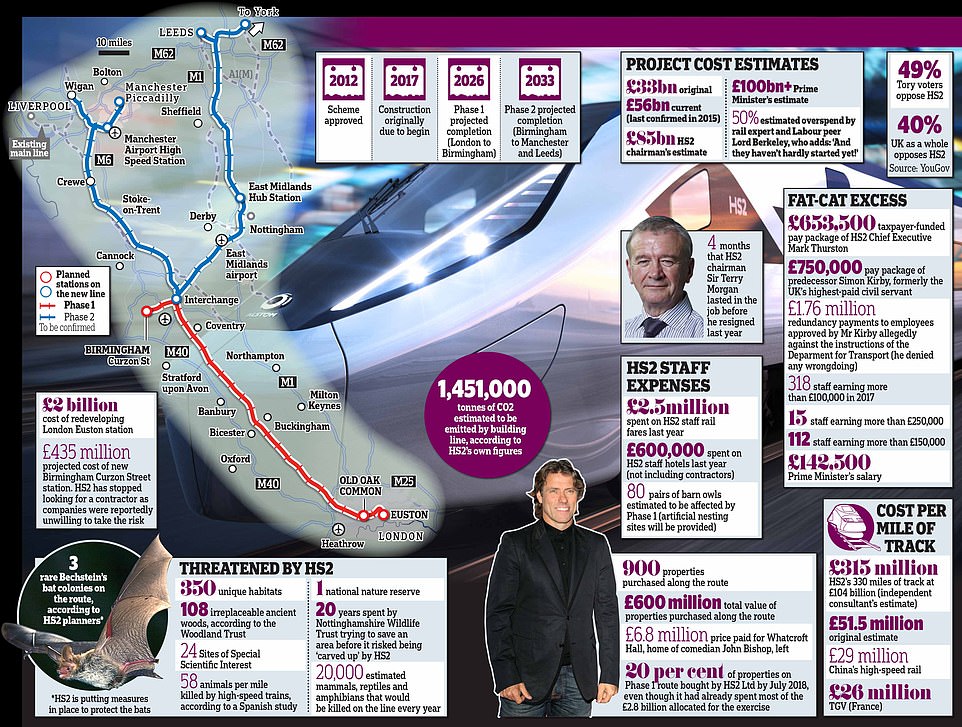 Mr Ryall said: ‘We live in the most beautiful country on the planet. I love my country but I fear my government.

‘You can’t play football with four blokes running around with the goalposts. It’s bloody awful.’

‘We’ve been treated terribly. People in our situation should not be put in that situation.

‘If it happens to you, please be as strong as you can for your family because, otherwise, they win twice.’

A spokesperson for HS2 Ltd said they had worked with the Ryalls to try and reach a conclusion that was acceptable to everyone,

He said: ‘We fully understand this has been a difficult situation, and we have been working with Mr Ryall to find a solution.

‘We are therefore very pleased to have been able to reach a conclusion and hope that he and his family will be happy in their new home.’

WHAT ARE THE PROPOSALS FOR A 1,000-MILE UK HIGH-SPEED RAIL NETWORK?

A report by Surrey-based think tank Greengauge 21, titled Beyond HS2, said boosting national productivity should be the guiding priority for re-designing the rail network.

The proposals lead to a re-orientation of Britain’s railway – from a single hub around London to a national railway network.

1. An upgraded fast route from Birmingham to Bristol Parkway carrying HS2 trains, continuing to the South West and South Wales.

2. A major upgrade to the East Coast mainline for the first time since the 1980s.

4. New lines in East Essex and Anglia, alleviating the West Anglia and Great Eastern Mainlines, both of which are at capacity.