The parents of a British executive murdered by his estranged wife have vowed to reunite their family after being forced to return home from China with only one of their two grandchildren.

During a bitter custody battle, Ian and Linda Simpson were told that they may never see either Jack, eight, or Alice, six, unless they agreed to leave one behind.

As they prepared to return to the UK with Alice, they pledged to do everything to ensure the pair will be reunited soon.

They have been fighting for custody since the children’s father Michael, 34, was killed in jealous rage by his ex-wife Fu Weiwei in Shanghai last year.

Speaking yesterday, Ian said: ‘Our fight continues and we will do all we can to bring Jack as well as Alice back to Britain and to reunite our grandchildren, who love each other dearly.’

An agreement involving the payment of a £9,200 settlement was thrashed out before a judge this week that allowed the family to take Alice, leaving Jack with his maternal grandparents in a remote part of China.

The family reluctantly took the heart-breaking decision amid warnings that failure to do so would leave them unable to see either child again.

Michael Simpson married Fu, a shop assistant, shortly after he arrived in China in 2009 and separated in 2015. In 2017 Fu stabbed him in the neck during a blazing row while he was at home with his new partner, Rachel Lin

The Simpsons, both 69, who are divorced, said their pain has been eased by the chance to bring Alice back to Britain to start a new life.

Mr Simpson, a retired business consultant, said: ‘We are delighted that Alice is coming home. She is talking to her brother and her [Chinese] grandparents every day on WeChat [a social media app] and is happy and ready for her big adventure.

We are hugely grateful to the Chinese authorities, our lawyers in China, our friends and supporters.’

Michael Simpson married Fu, a shop assistant, shortly after he arrived in China in 2009 to work as an operations manager for clothing brand Next.

They separated in 2015. In 2017 Fu stabbed him in the neck during a blazing row while he was at home with his new partner, Rachel Lin.

Fu is now serving a life sentence. In the days following the murder, Alice and Jack were sent hundreds of miles to live with their grandparents and cousin in a tiny flat in Nanzhang, north-west China.

The Simpsons were denied access to them for a year and believed they were being extorted by the Fu family, who initially demanded more than £63,000 for custody.

They finalised the deal on Christmas Day after a battle that has cost £100,000 in legal fees.

Mr Simpson said: ‘We are overjoyed to bring Alice home but it breaks our hearts to leave Jack behind. Linda cried and asked me, ‘How can we wrench them apart?’

‘But in the end we had to choose between coming home with Alice or walking away without either. Alice has been amazingly brave but there have been moments when she has been in tears asking for her brother.’

The agreement will see Alice live with Ian and his second wife Diana in Hartest, Suffolk, while Linda and Michael’s brother Andrew, 39, will provide assistance.

Alice and Jack can speak weekly by phone and visit each other once a year in either China or England.

Mr Simpson told the Mail on Sunday: ‘We feel terribly guilty leaving Jack behind. You try to do the right thing and there was no easy answer unless a judge somehow gave both children to us. But we were warned that that was probably never going to happen.’

During previous talks, Fu’s family dismissed an official offer of forgiveness from the Simpson family – which under Chinese law could have seen her minimum 20-year sentence halved – as well as £10,000. 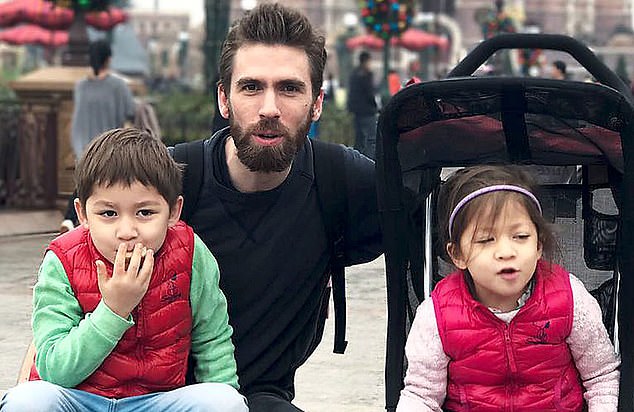 Michael Simpson with his two children, Alice and Jack. His parents have been fighting for custody since the children’s father Michael, 34, was killed in jealous rage by his ex-wife Fu Weiwei in Shanghai last year

Mr Simpson visited Fu in jail but she refused to apologise for her actions or agree custody.

He credits an intervention by Foreign Secretary Jeremy Hunt during an official visit to Beijing in July with boosting their chances.

The Simpsons were angered to learn that Alice and Jack have been lied to by Chinese relatives, who told them that their parents were alive and working abroad.

They are prepared for the anguish of telling Alice that her father is dead and that her mother was the killer, and are adamant that living in the UK is best for the children.

Mr Simpson said: ‘We can give them back the life they had before – travel, holidays, education and friends. The judge said last week that even the Fu family eventually admitted the children would be better off in England.’