A couple who quit their old lifestyle as they felt ‘suffocated’ by their repetitive jobs now live in a £20,000 van that they converted themselves.

Tom Ward, 36, and Amy O’Brien, 29, were fed up of running a hotel and pub, so they simply decided to quit and travel around the UK with their rescue dog, Frankie, instead.

Upon arriving back to the reality of their jobs after travelling for months in their van, Amy and Tom took a chance in March 2020, when the Covid-19 global pandemic hit the world, and have not looked back since.

Tom and Amy are not the only ones who ditched their jobs for the van life, as a woman who lost her flat during the pandemic now also works remotely from her refurbished £21,000 van.

Their new mobile home consists of a bathroom- which also acts as a drying room- with a hot water shower and a compost toilet, a fixed bed on a higher level, a gas hob, sink and fridge in the kitchen and an outdoor shower.

The now freelance photographers spent a total of £28,650 on their van which includes the van itself, conversion costs, the insurance and a year’s road tax.

Tom Ward and Amy O’Brien spent a total of £28,650 on their new mobile home, which took them six months to build 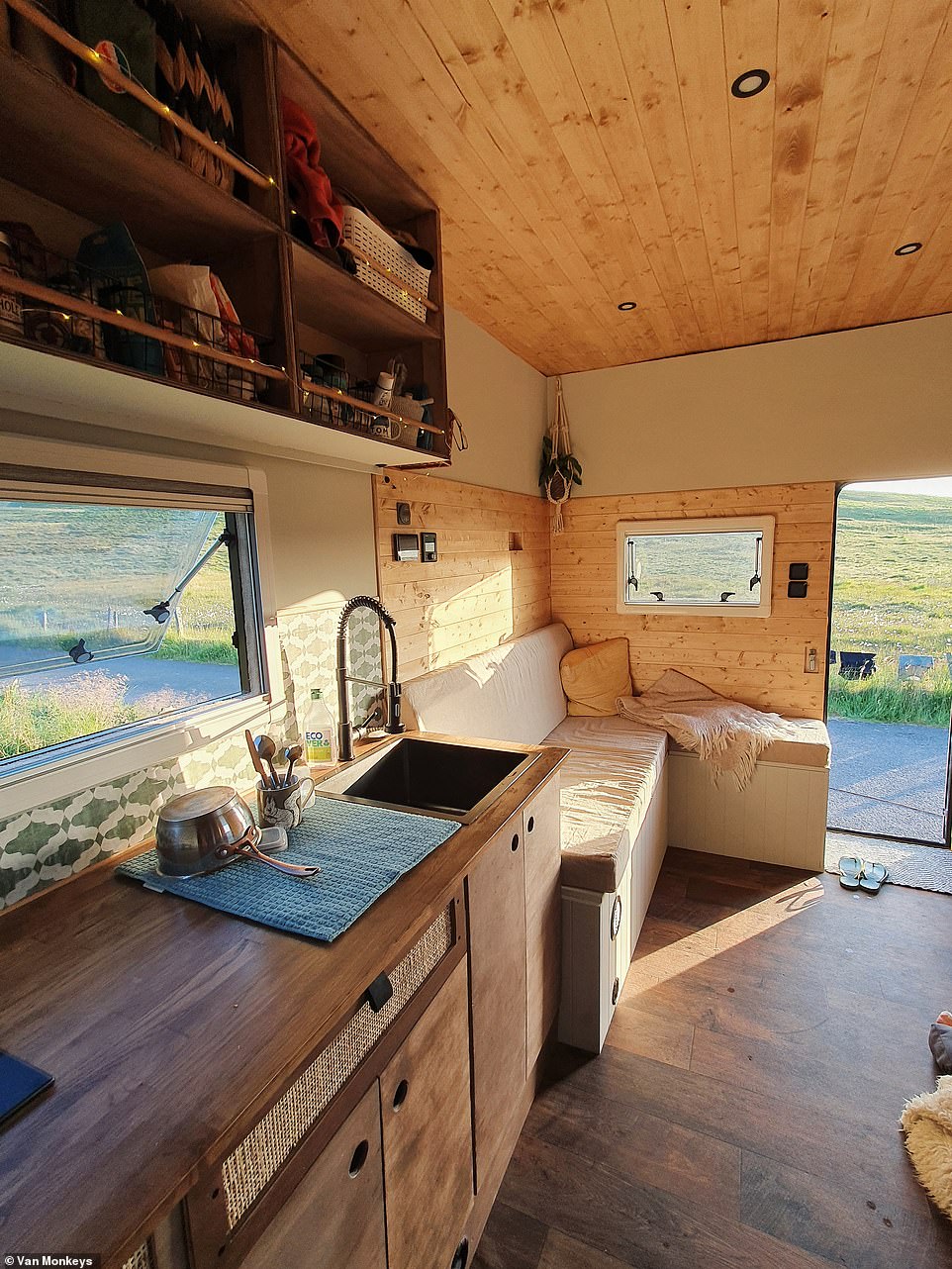 Cosy: The pair were tired of living the same day over again and wanted a change, so they quit their jobs to live in their van and work remotely 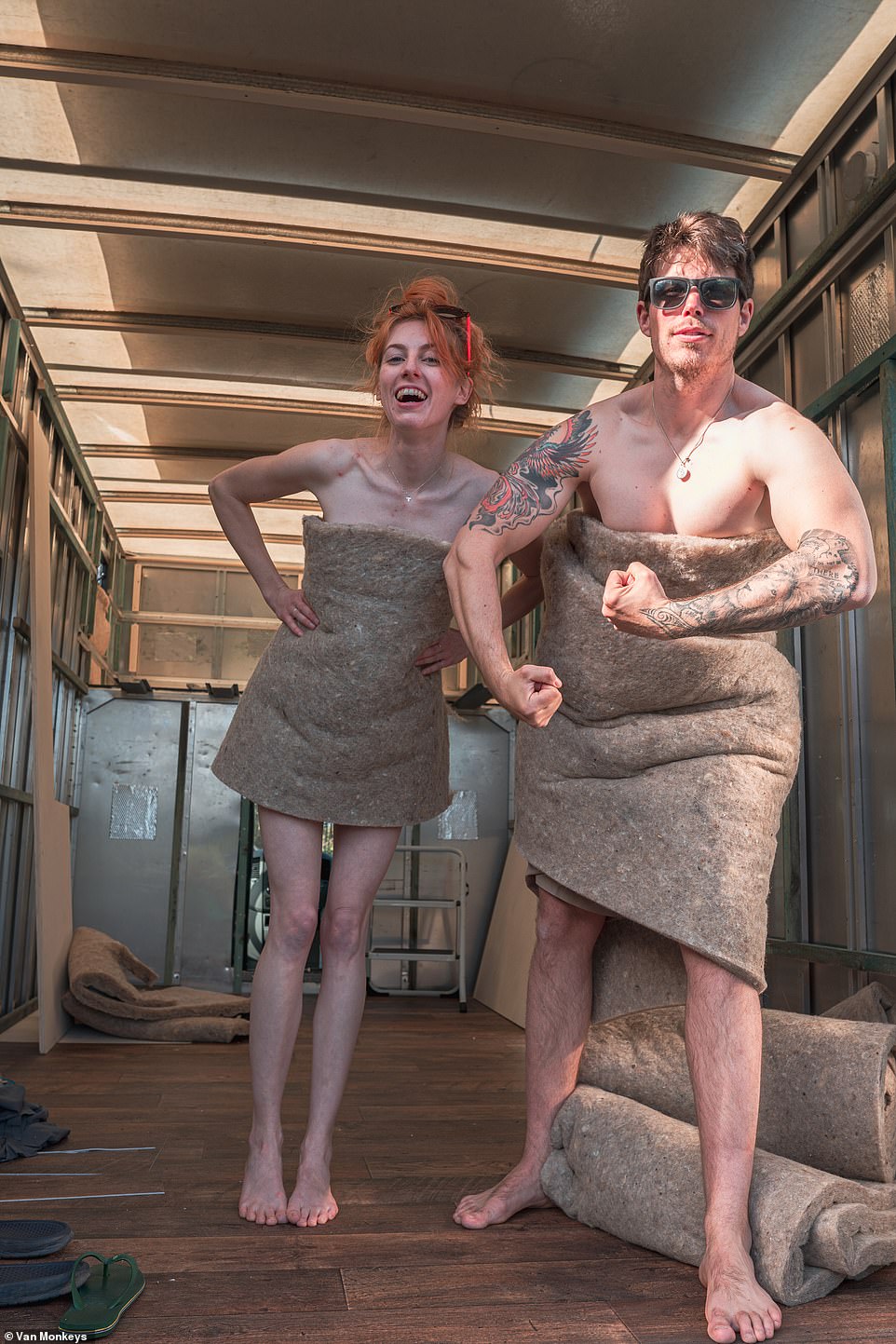 The couple renovated the van themselves and ensured it was properly insulated by installing sheep’s wool for the cold, damp, UK winters

Whilst they say it can be expensive to purchase the vehicle and then also spend the time and cash converting it, the Tom and Amy say that they were ‘very lucky’ to work hard and save their money to invest in their new home on wheels.

It took the couple six months to convert and build the whole vehicle by themselves and they have built five vans in the last four years, including two earlier this year for their friends.

Amy, originally from Frome, Somerset, told MailOnline: ‘I definitely feel like a weight is lifted off my shoulders. I’m not in this stressful work situation. I suppose I reached a point where I was just working and working and I felt like it was in like The Truman Show.

‘It just terrified me that I would be in the same position in five or ten years time.

‘Well, I met Tom and he was on the same wavelength as me and it was great. So we just kind of encouraged each other and now we’re in this position. So I feel, in terms of society pressure, I feel free of that. Which is amazing, because I didn’t realise how suffocated I was.’

Tom, originally from Farnham, Surrey, told MailOnline: ‘To have that freedom is just something that I’ve always craved. It sounds cliched, but just opening the door and being in a new place and exploring, we love the outside. I mean you’ve really got to embrace and love the outside.’

The pair, who met in 2018, primarily earn their income through freelance photography and have built a mobile studio in their van so they can work remotely from anywhere.

They say they take primarily product photography for brands, as scenic location shots are easier for them to shoot. However the couple say they are ‘a jack of all trades’ as they also earnt money by converting vans for friends. 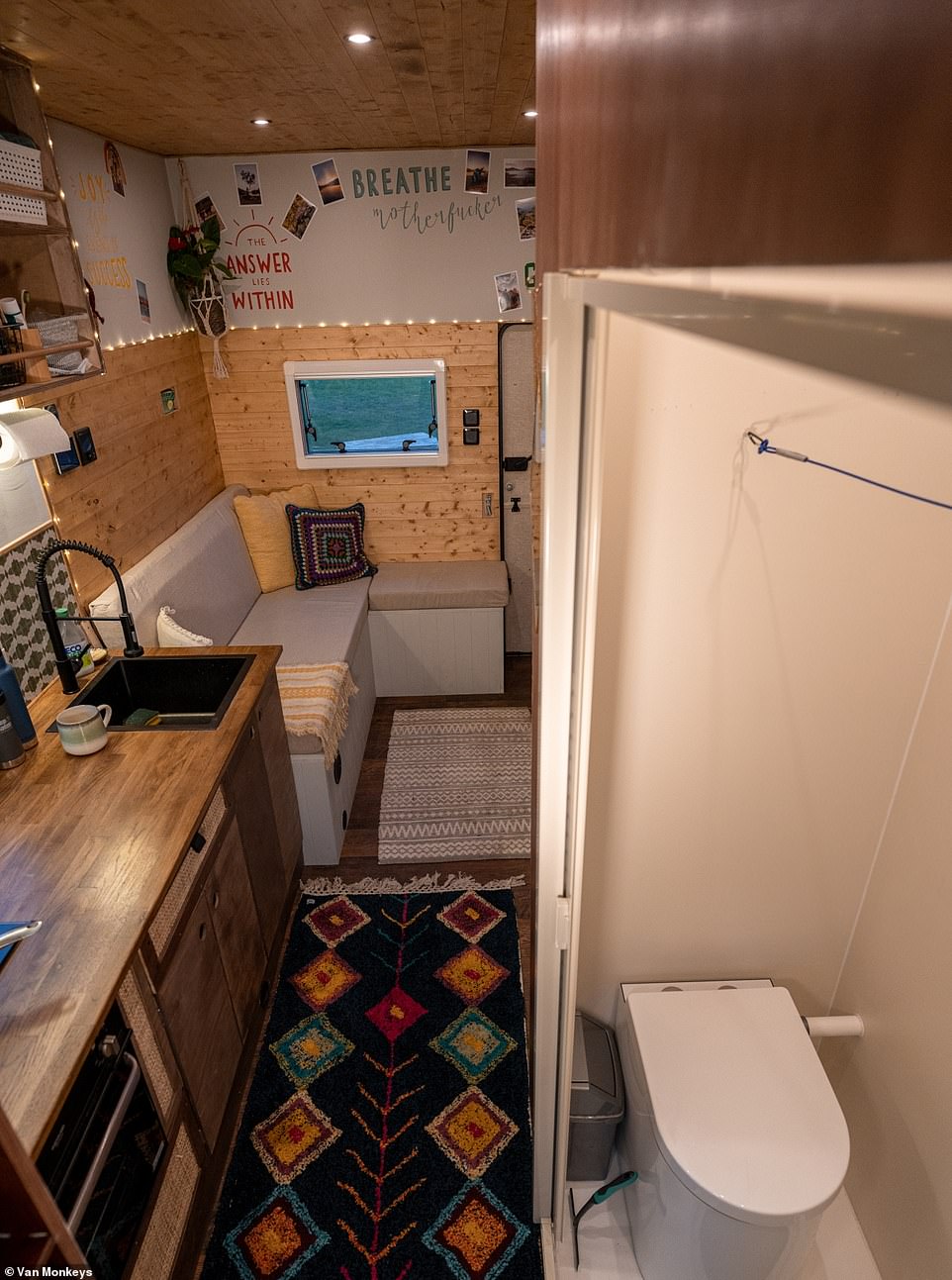 The adventurous couple decorated their new home from scratch and made sure to use all the space they had. Pictured is their compost toilet in their bathroom, their kitchen area which has a hob, oven and sink and a seating area 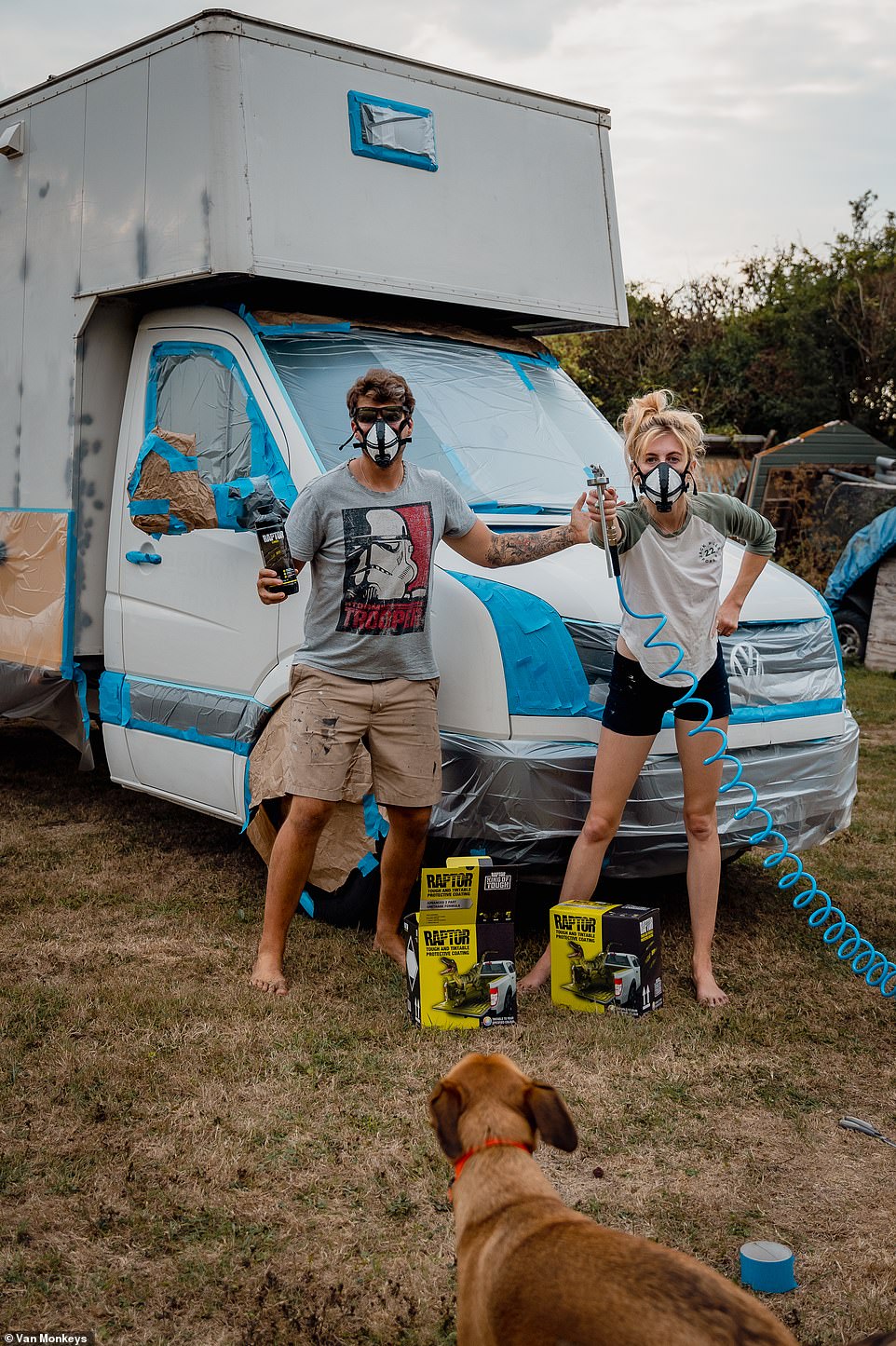 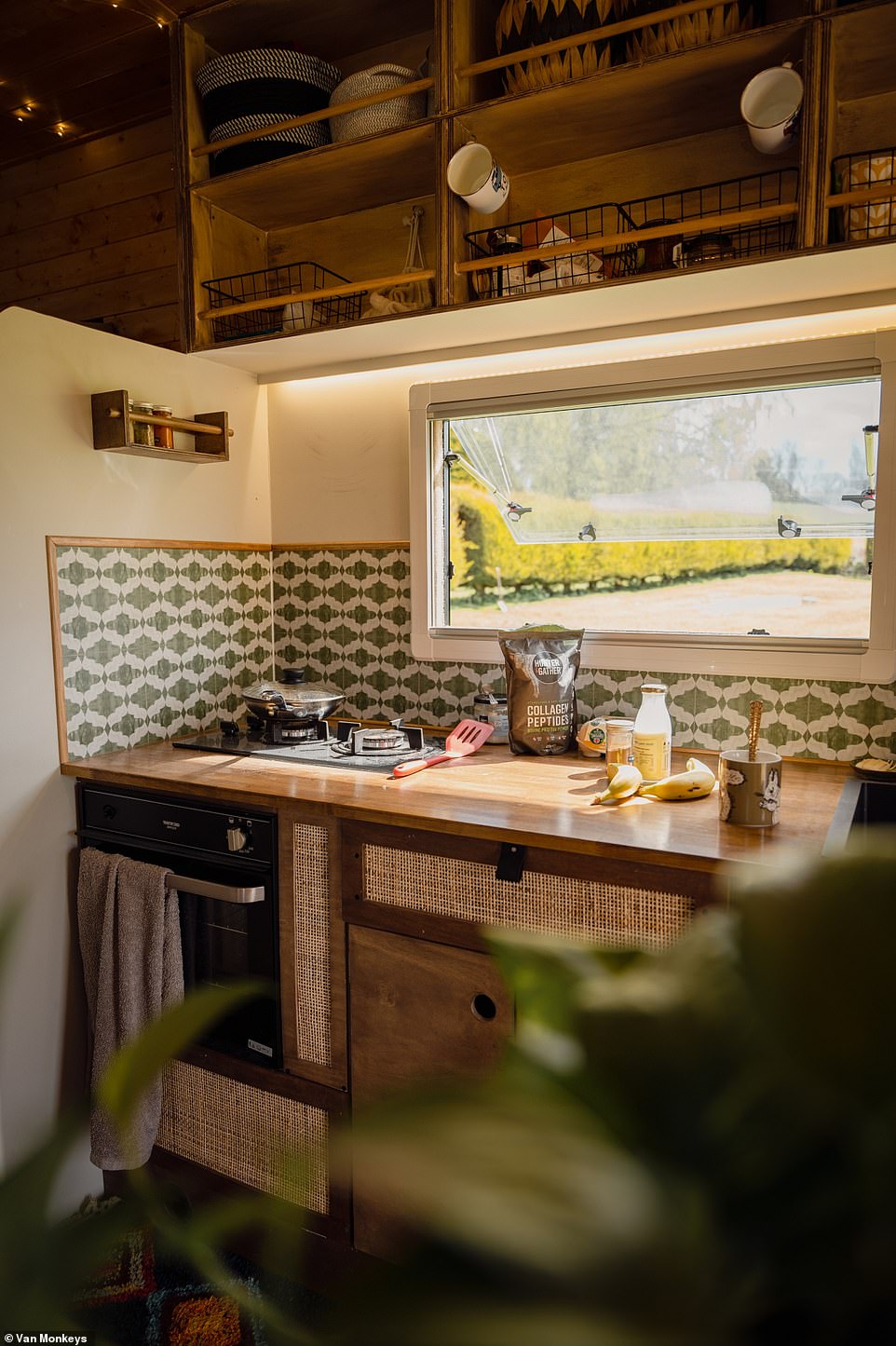 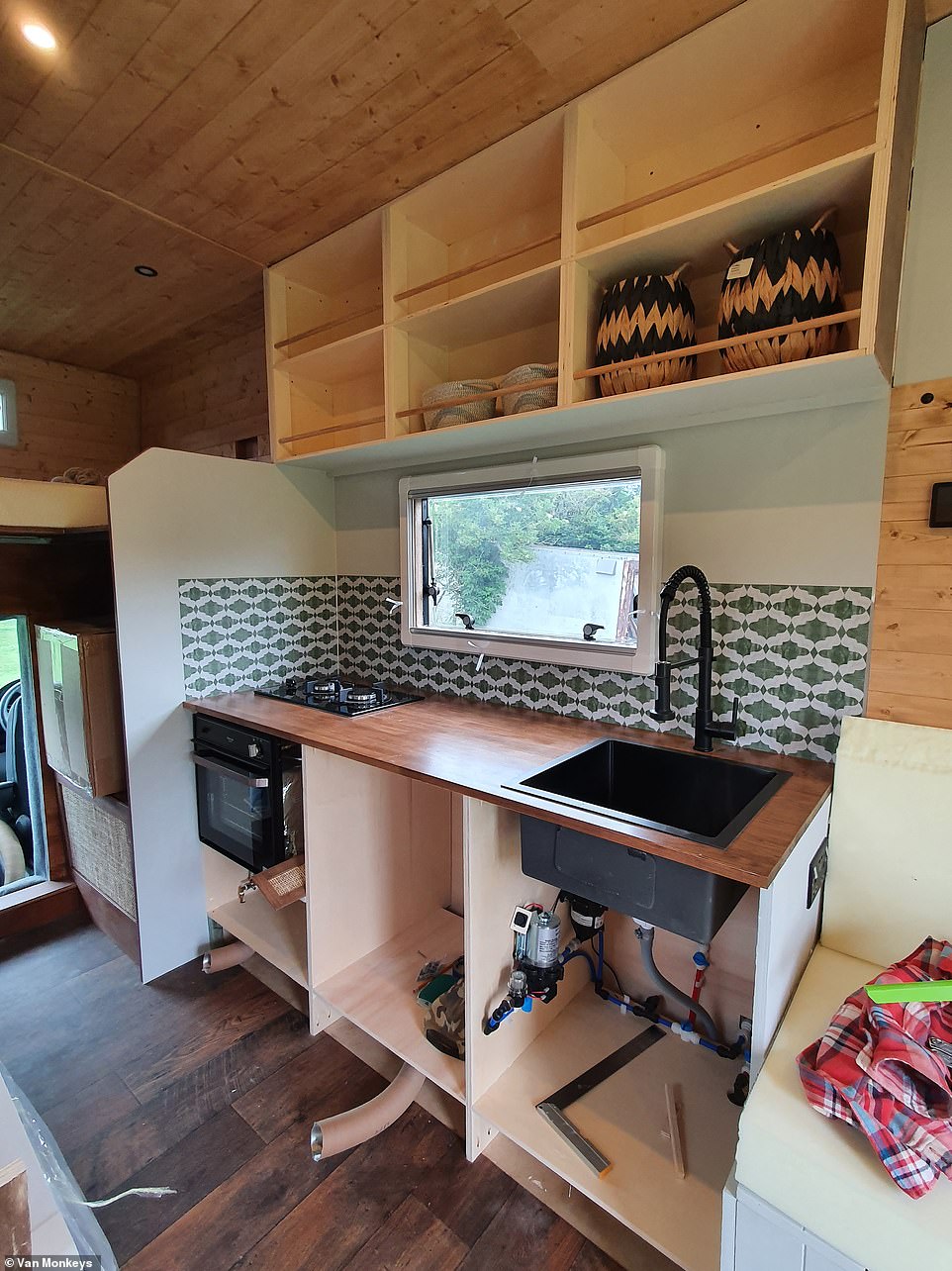 The pair converted their £28k home by themselves and built it all from scratch, including fitting in a fully-equipped kitchen 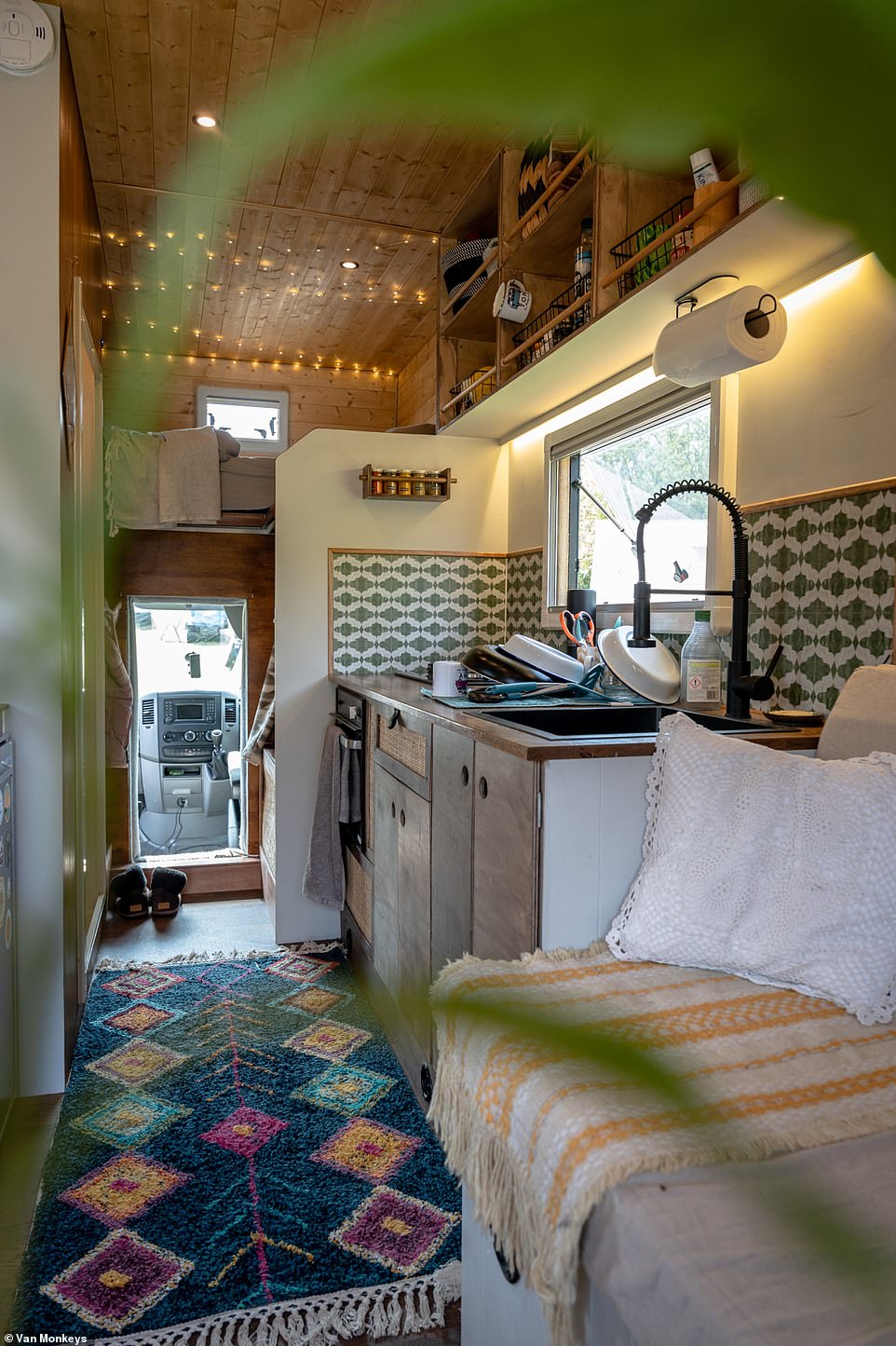 Above the driver and passenger seat of the van they have a fixed bed on a higher level, making use all the space they have

The couple, who call themselves The Van Monkeys, pay around £10 to £15 for gas each month, get their electricity for free due to solar power, and have insulated the van with sheep’s wool so it stays warm.

They have also said they are driving less due to cost of fuel doubling, meaning that they stay in areas for longer and can drive as much or as little as they want.

Petrol and diesel are set to rise by around 12p a litre in late March 2023, as the The Office for Budget Responsibility pointed to a ‘planned 23 per cent increase in the fuel duty rate’.

The pair say Snowden in Wales is a pretty area to visit but their top country to visit in the UK is Scotland because of its ‘beautiful scenery’.

Their favourite place to visit so far has been Luce Bay in Scotland, but Amy says the Isle of Lewis and Isle of Harris is great for spotting Highland cows.

In terms of the cost-of-living crisis and skyrocketing rent, Tom said: ‘I think if a lot of people are struggling out there and really desperate to find places to go or can’t find a home, it can be an option.

‘We have a lot of friends that are sort of mid-thirties that saved up a deposit to buy a house and instead bought a van, and now living their best lives. That’s kind of what we did as well, so we took the the van option over the house option. I would say it’s definitely the best decision I’ve made in my recent years.

‘I’ve lived in some places that are so much worse than our van and paid so much more. Landlords, unfortunately, don’t always care about their tenants. I’ve lived in London and Bristol, places that are actually very expensive to live and still you’re living with damp, mould, and things not working.’

Amy added: ‘You have to be gutsy, especially if you’re doing it on your own. But it’s definitely an option. It is amazing how much your life changes, I would say in our instance, for the better because we love it.’

Amy says that they also do not have to earn as much money as they used to. When working full-time jobs and living in a bungalow in Somerset, the couple’s outgoings was around £850 a month before spending money. Now, they say if earn same monthly income then it’s a ‘great month’, as the van’s bills are considerably less. 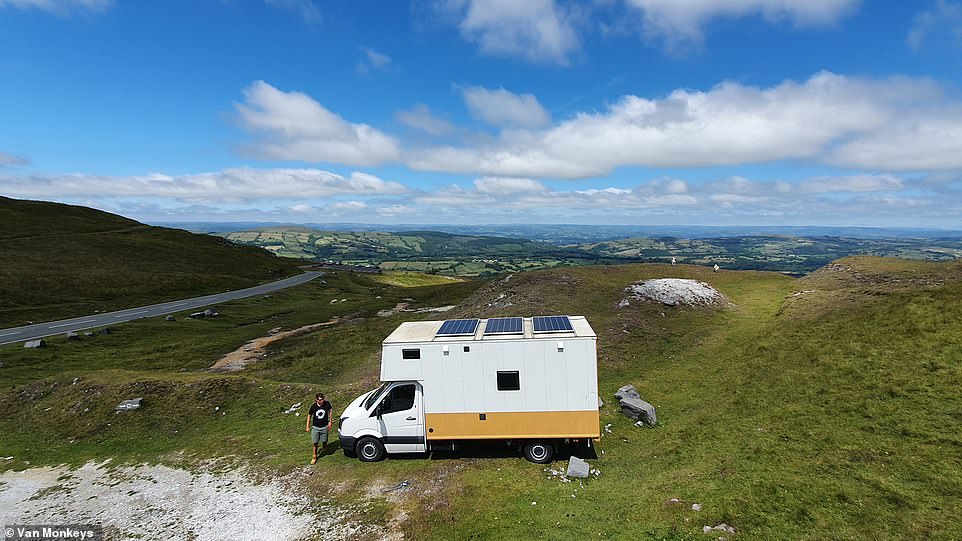 The van runs on solar power, meaning that Tom and Amy get their electricity for free and can get power when they are travel to remote areas 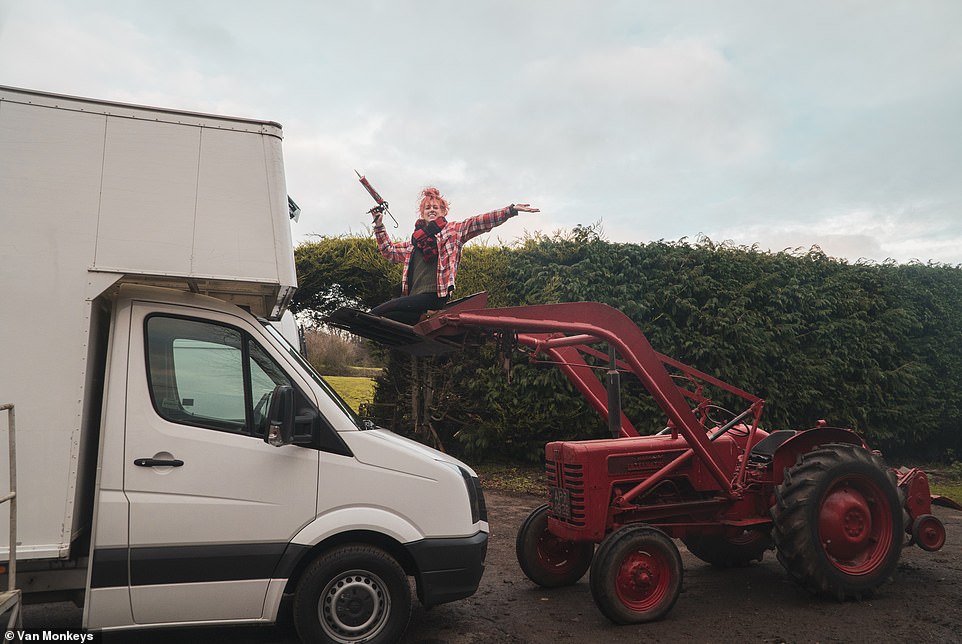 They bought their third van and it became their ‘house on wheels’ in July 2020, after they had quit their jobs 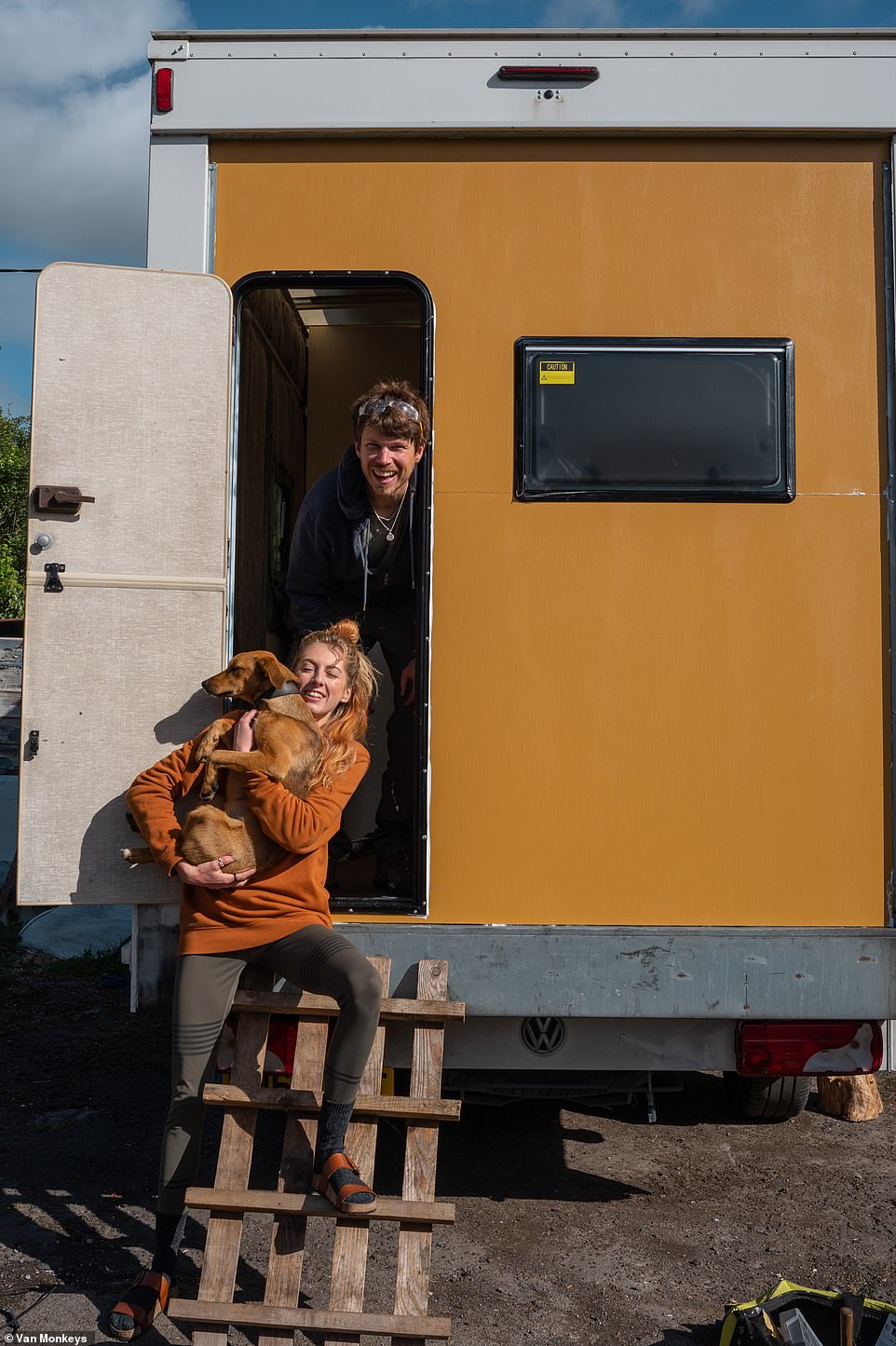 Tom and Amy have been asked by friends to renovate vans for them, in total they have built five vans, of which three have been their own 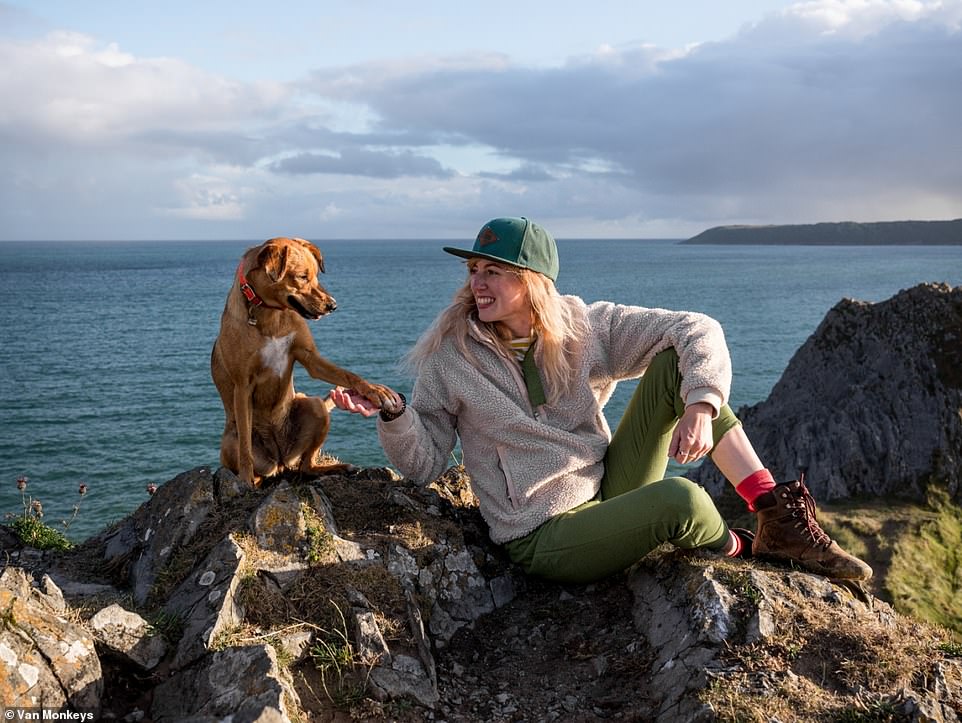 Amy said: ‘You have to be gutsy, especially if you’re doing it on your own. But it’s definitely an option. It is amazing how much your life changes, I would say in our instance, for the better because we love it’

Tom and Amy have also learnt from previous van-building experience to prioritise the practicality of the mobile home before making it look ‘pretty’. They opted for double-glazed windows instead of glass windows and ensured that the van was fully-insulated for cold and wet British winters.

When asked how living in a van compared to living in a house, Tom said: ‘It’s no different really, other than you’ve got less space to manage things. I would say that it’s better than living in a house because you can wake up every day and you’re in a different destination.

‘I think in a house, we can get kind of bored or complacent with everything. Whereas when you’re in a venue, it kind of strips life back to survival in a way because the basic things that you need, like water and power, and so on, you actually have to work for in a van. Whereas in a house, everything is so easy. So I think for me, it kind of brings it back to a bit more of reality of life. I prefer it to a house.’

The pair have said that they now appreciate the ‘little things’ such as instant hot water and power showers, things they said they used to take for granted when they lived in a house.

When asked what she would say to someone thinking of taking the plunge and entering van life, Amy said: ‘There’s no harm in giving it a go and I feel like you can be too comfortable just waiting for something to happen to you. You’ve just got to go out and do it because you’re the one that’s in control of you and your decisions.’

Tom added: ‘I’d say just do it. Because if you do it correctly, you’re making an investment anyway. If you build a decent van, nowadays, vans are going for so much money that you can build one and do one and if it doesn’t work out for you, you can sell it, you’ll make a profit and then you can go back into the life that you were in.’ 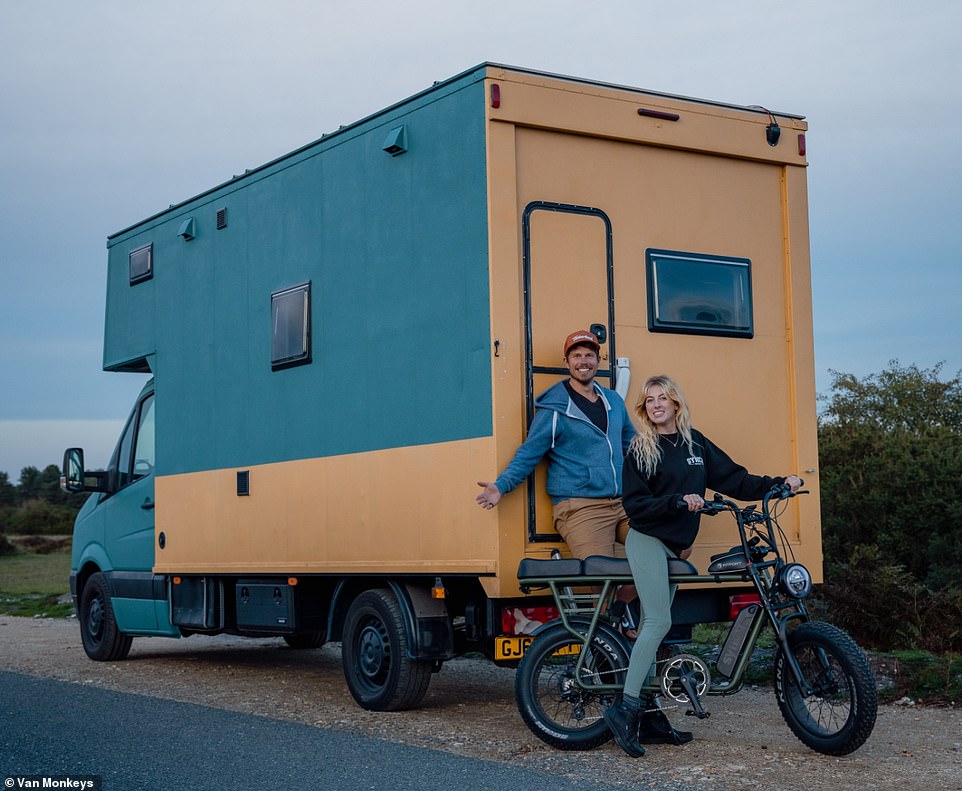 The couple now appreciate ‘the little things’ that they took for granted when they lived in a house, such as having a power shower and instant hot water from a tap 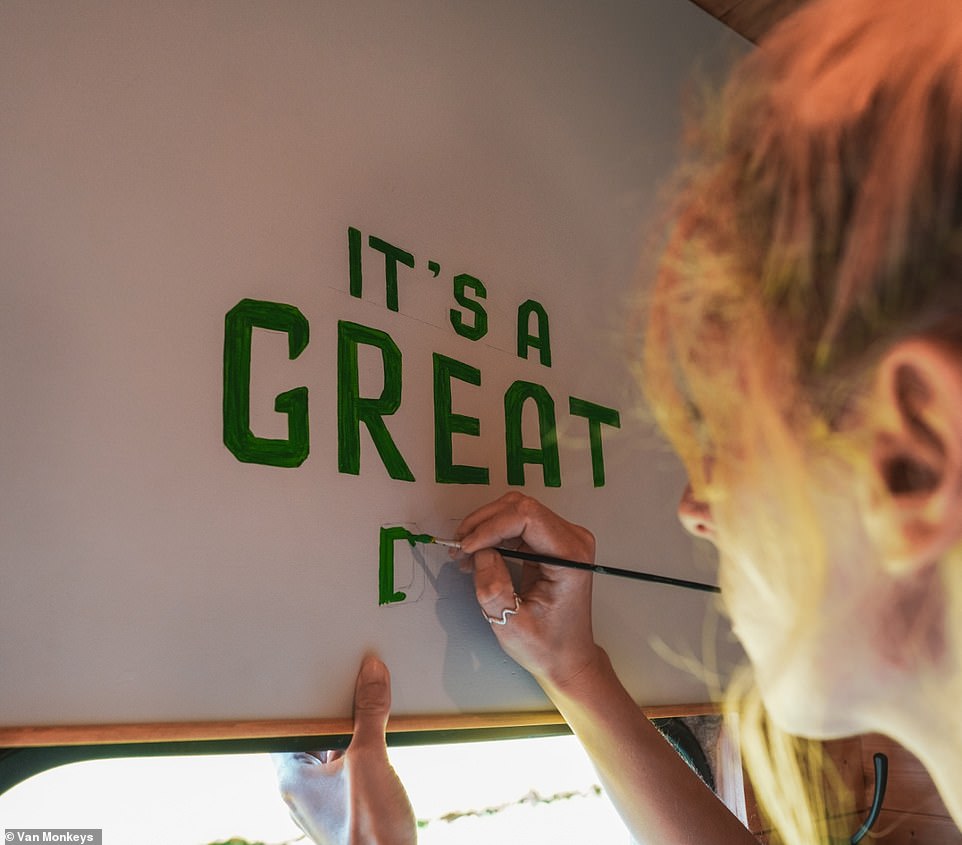 The couple have driven less since the price of fuel has skyrocketed, meaning they stay parked in places for longer 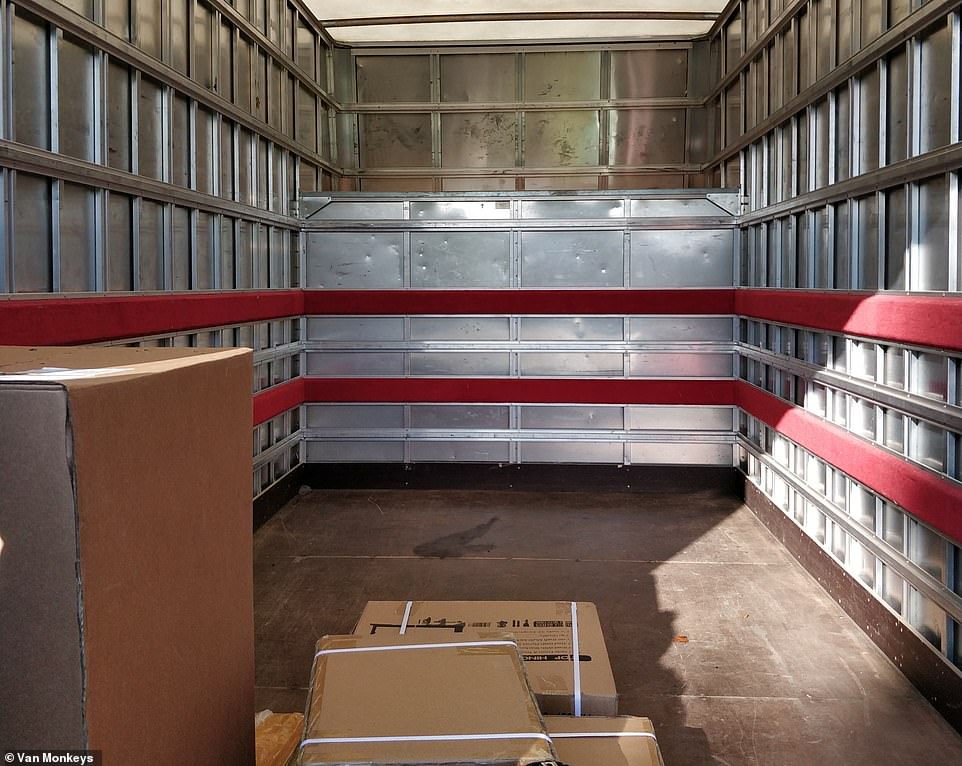 The pair built the van from scratch, when Tom was asked how different van life was to living in a house, he said: ‘It’s no different really, other than you’ve got less space to manage things’ 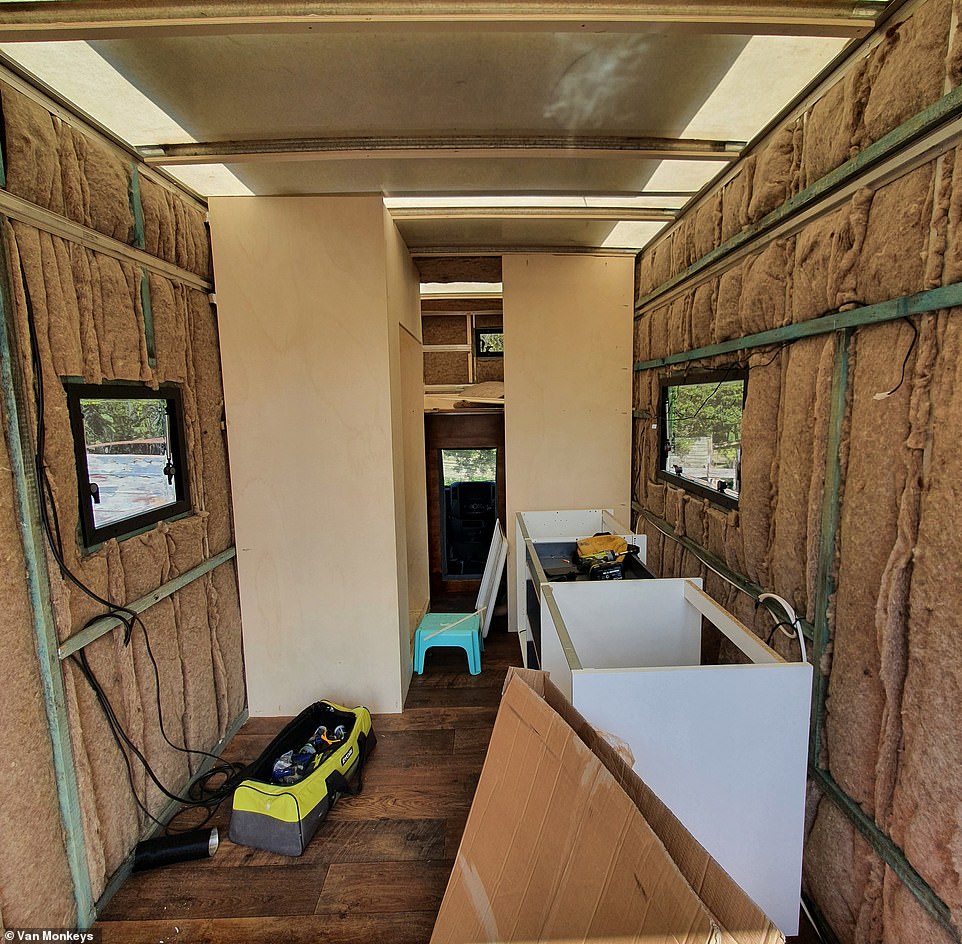 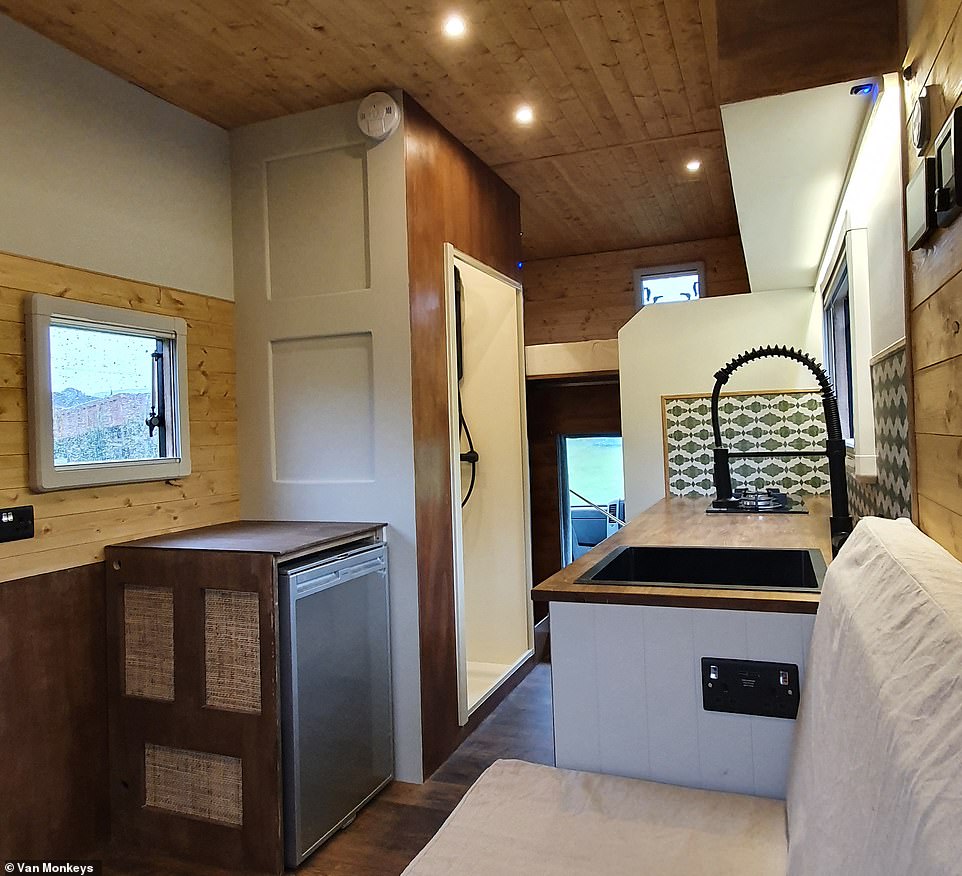 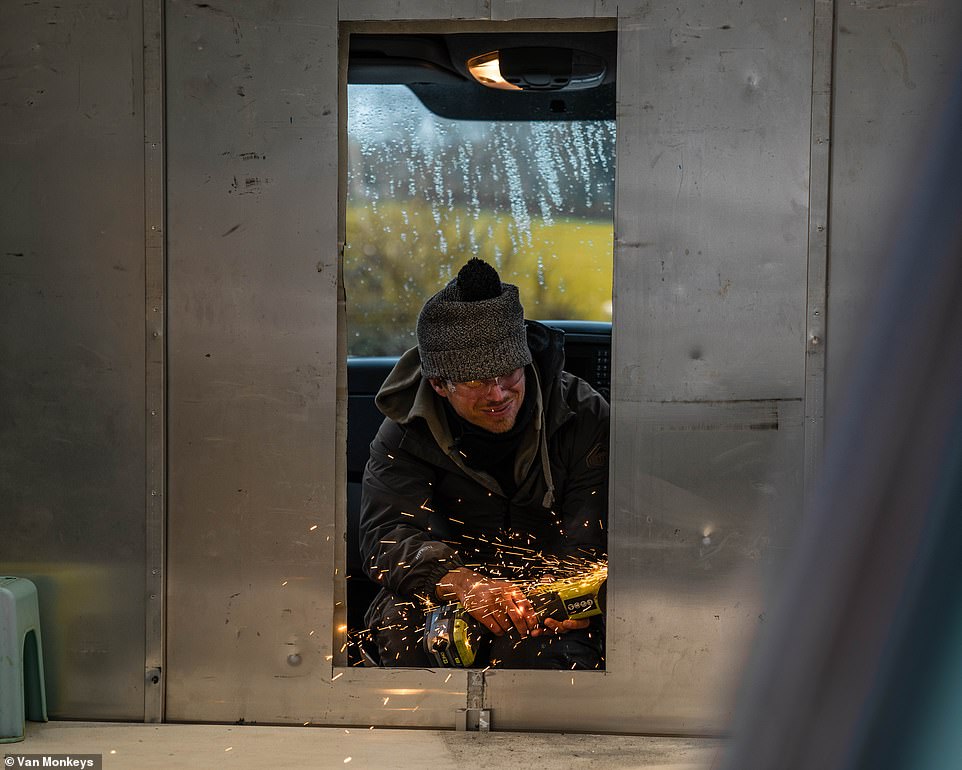 DIY: Tom said: ‘If you build a decent van, nowadays, vans are going for so much money that you can build one and do one and if it doesn’t work out for you, you can sell it, you’ll make a profit and then you can go back into the life that you were in’ 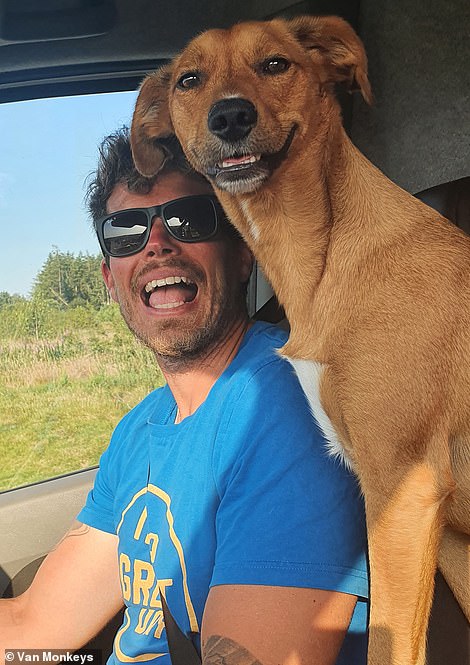 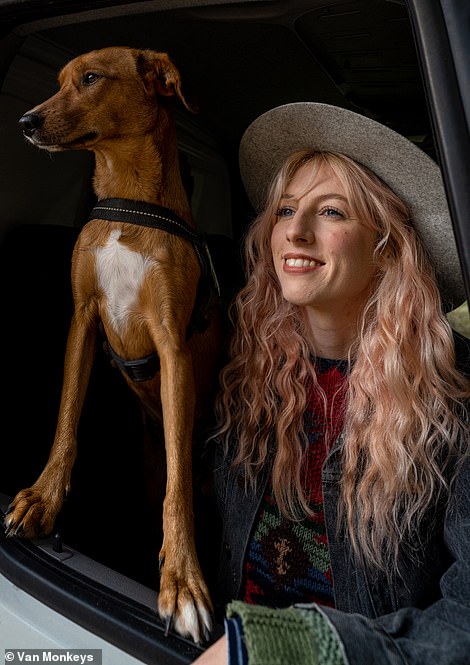 Tom and Amy are accompanied on their travels with their rescue dog named Frankie, who loves the outdoors just as much as them