A woman has revealed how she and her partner were able to give an old caravan a new lease of life after looking for a challenge that would boost their mental wellbeing during lockdown.

Melanie Jones, 41, from Bristol, who works for the police, and her partner Mark, 52, who has his own building company, spent the tough months of lockdown working on modernising a caravan they bought for £700.

They claim the 25-year-old vehicle would be worth an eye-watering £20,000 if they had bought it brand new.

The who have six kids between them, spent £1,000 on budget buys from stores including Homebase, eBay and Amazon to rejuvenate the caravan.

Melanie Jones, 41, and her partner Mark, 52, who live in Bristol, revealed how they were able to overhaul the appearance of a 25-year-old caravan. Pictured: The caravan after 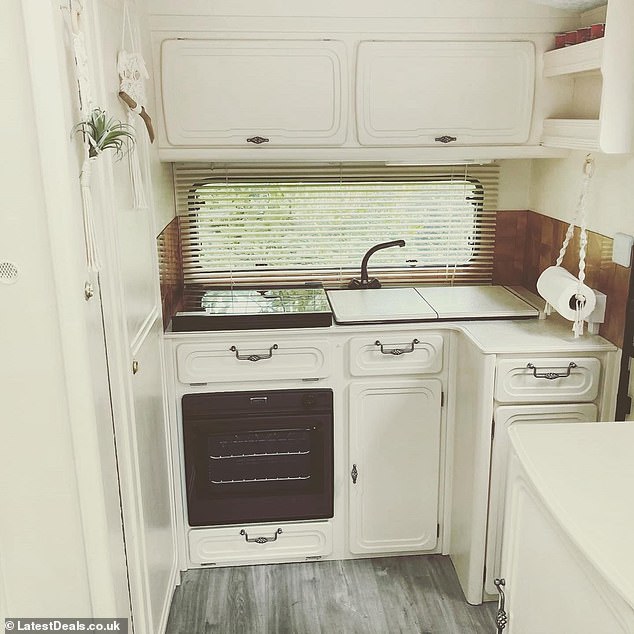 Melanie told members of money-saving community LatestDeals.co.uk, that they spent just £1,000 on materials to give the caravan a modern look. Pictured: The caravan after 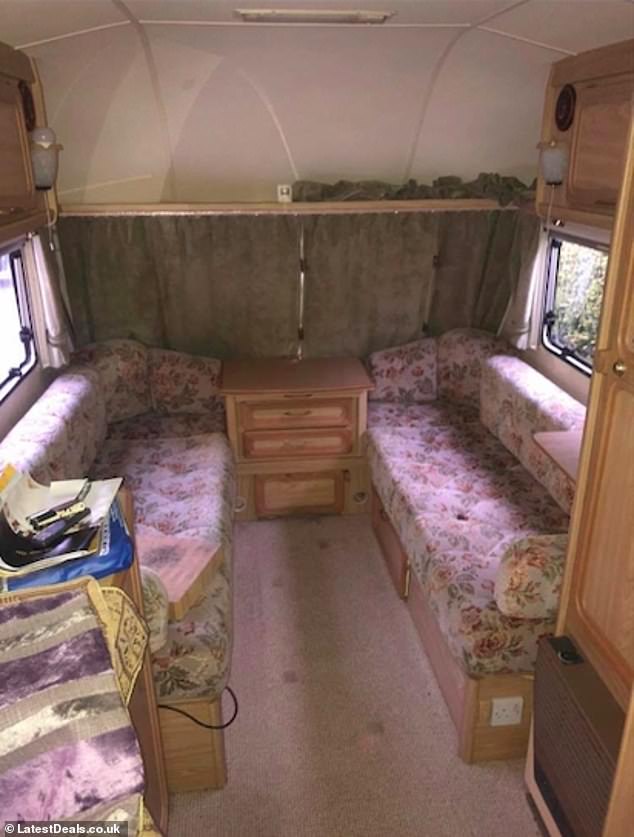 Melanie explained they were inspired to buy a caravan because their holiday of a lifetime was cancelled and they wanted a project to keep them occupied during lockdown. Pictured: The caravan before renovation

Melanie told money-saving community LatestDeals.co.uk, that they were keen to find a challenge that would keep them busy and focused during the lockdown.

She said: ‘We had our holiday of a lifetime to Thailand cancelled in April this year due to Covid and soon realised that we were not going to be able to go this year at all.

‘We needed something to keep us focused for our health and mental wellbeing during lockdown.

‘This is why we decided to buy a 25-year-old caravan to renovate so we had staycations to look forward to and keep us focused and active.

‘We both work full time and have six children between us – two are under 18 and the rest are now adults – so life is extremely busy for us.

‘We decided to use our holiday spending money to purchase the Clubman at £700. Being 25-years-old, it was very dated, smelly and damp.

‘It needed heaps of TLC and we were just the right people to do that. With Mark’s building expertise and my flair for interiors, we put our heads together and started the renovations.

‘As the Clubman is a two-berth and quite small, we wanted to make it seem large, light, and as airy as possible, making the most of the small space we had, so we knew we needed to go with a light colour scheme.

‘I also love macramé and wanted to incorporate that too. I am no sewer so I asked my friend @craftyclairesbristol to reupholster the seats once I sourced the material. 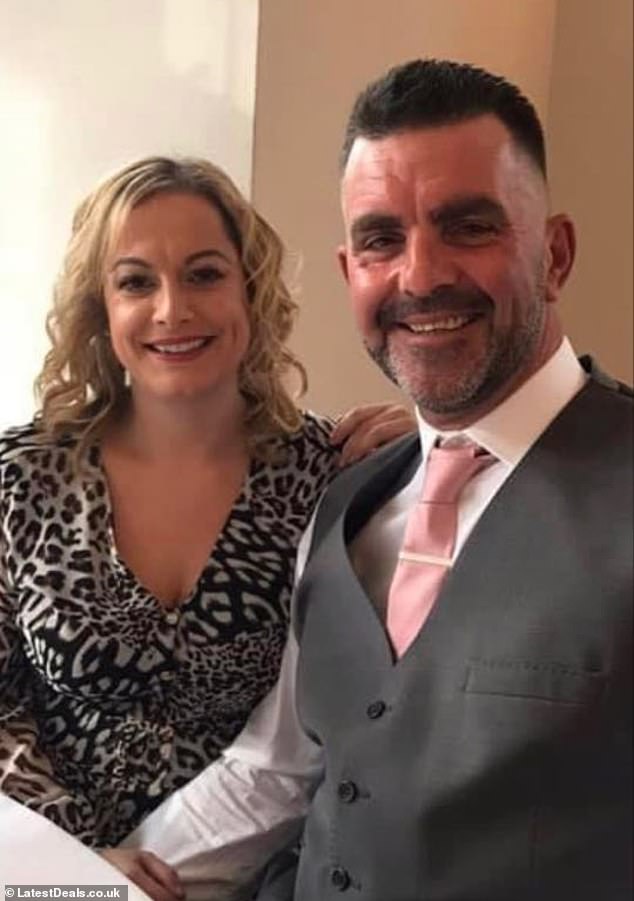 Melanie and Mark (pictured) began their caravan renovation by taking out all of the interior, including the carpet and curtains 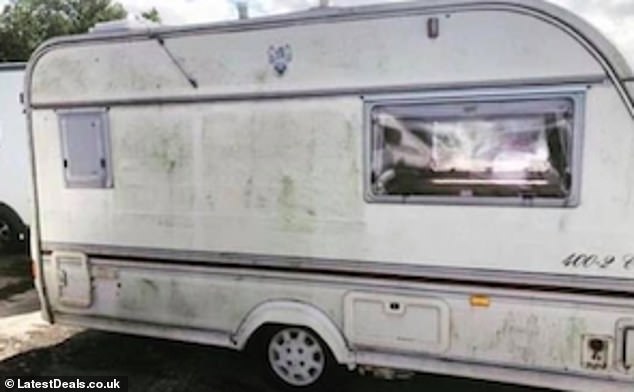 Bristol-based couple said removing the lights, door handles and seat covers took them less than an hour. Pictured: The exterior of the caravan before renovations

‘We first took out all the interior including the stained brown carpet, velour green curtains, the rails and pelmet and three clocks that had been placed randomly.

‘We also took off the lights, all the door handles, took the seat covers out and stripped off the window plastic and blinds.

‘This took us less than an hour as we were super excited to be making a start, we then hoovered the whole inside, then the real work began.

‘The first thing we did was to sand down all the wood. That seemed to take ages – I have seen some other people who renovate who don’t bother with proper preparation which in the end can lead to paint chipping off in transit, as caravans are quite wobbly on the road, so this is key.

‘Once this was done, we wiped down all the surfaces then used Valspar Difficult Surfaces Primer in white on all brown surfaces and kitchen walls. Melanie said if she were to renovate again, she would most likely use a silk or gloss paint to make cleaning easier. Pictured: The caravan during renovation

‘If I were to renovate again I would probably use a silk or gloss paint as I think this would be easier to clean down.

‘The door handles were some old ones we had lying around in the garage so we utilised those in the caravan to keep the cost down as much as possible.

‘For the ceiling, I decided to go with Superfresco wallpaper. Because everything was going to be light colours, I knew I would need some added texture so this was perfect.

‘Mark wallpapered and I then used two coats of Homebase white matt emulsion on top. The ceiling also has plastic strips on it and also plastic surrounds on the ceiling lights and air vent which I sprayed white with Rust-Oleum All Surface Paint in Flat White.

‘I had never spray-painted anything in my whole life before, and had a grin on my face whilst doing it feeling like Banksy! 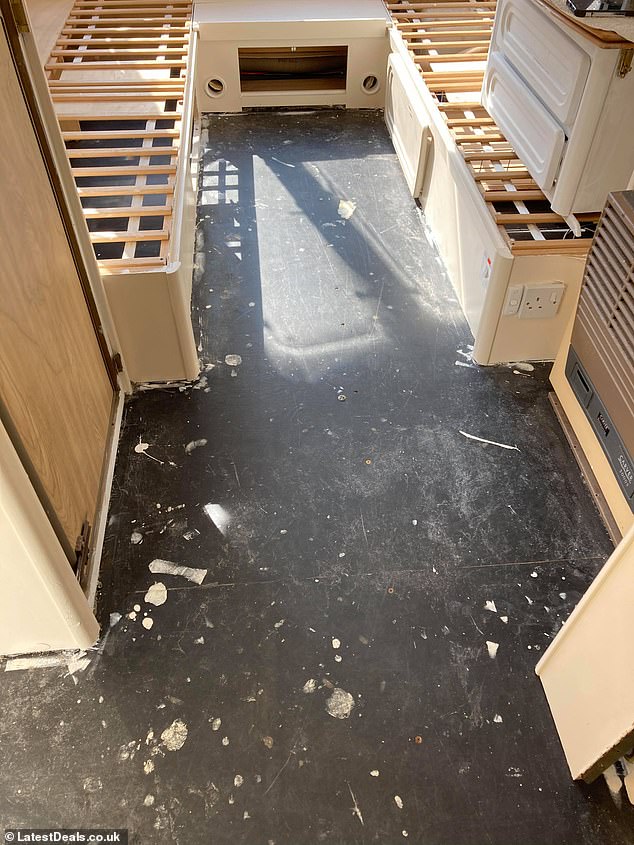 Melanie said everything in the caravan was brown, but she was able to refresh the appearance using white paint. Pictured: The caravan during renovations

‘A tip for the cupboards is to take the doors off and the hinges. Trying to get paint off them is a nightmare.

‘On the last day of priming, I thought I had finished, I lifted up one of the kitchen cupboard doors to find it brown. All the doors came off after that.

‘In the caravan, everything was brown. The new ones still seemed to have the brown look which I thought should be updated even down to the sockets so I decided to spray them white with the Rust-Oleum as well and Mark fitted one new one with a USB charger.

‘The lights on the top cupboards were £20 from Homebase. When I took off the lights they had a pull cord which I just chucked along with the light shades thinking they wouldn’t be needed.

‘When we replaced them they were permanently on because we forgot that we needed the cord!

‘Luckily, as Mark is a builder, he could easily and quickly whip in new light switches for us. Problem solved – a tip is to keep all pulleys for any lights you are thinking about changing. 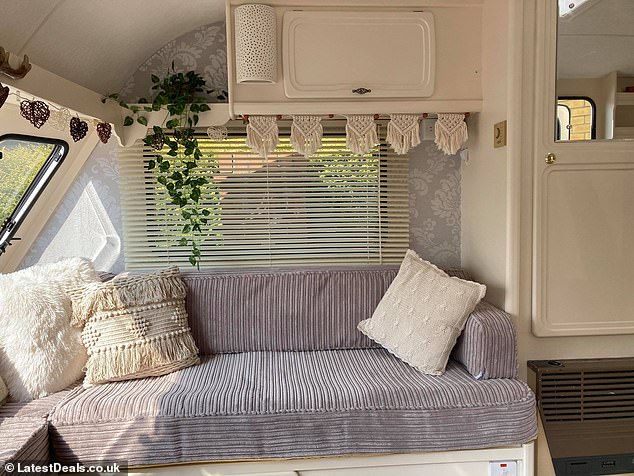 Melanie said she purchased budget wallpaper from Dunelm for the walls and ceiling. Pictured: The caravan after renovations

‘We found damp under the left-hand window and looking underneath, the previous owners had fixed it with foam which hadn’t worked to we had to replace the whole shelf.

‘Again, thankfully Mark could do this no problem although to anybody that is not skilled you can get wood cut to size in DIY stores so this is fairly easy. We then painted it with the Valspar Biscuit Crumbs.

‘For the floor, we decided to use vinyl – we wanted something light but not too light that would get dirty easily and needed to think of weight in the caravan so went for quick-step vinyl flooring.

How much did Melanie spend?

‘The walls were wallpapered in a light grey and silver design – I can’t recall what exactly was used but I do know it came out of the bargain bucket in Dunelm for £6. A real bargain.

‘The fabric on the seating was jumbo corduroy in mink. I am no sewer so my friend Claire did the re-upholstery for me.

‘I decided to have a large pelmet in front of the main windows and asked Mark to freehand make us one for the van so I could hang rattan heart lights from it. The lights were from blaze-on.com and create a lovely ambience in the evening.

‘In the beginning, there was a built-in radio and speakers in the glass cupboard. I took the radio out which has given us more shelving space. We then wallpapered behind it with grey and silver wallpaper to keep in with the theme.

‘The kitchen tiles are self-adhesive brushed copper wall tiles by Homey Mosaic. They were light and easy to stick with peel-off backs that stick to the wall. Perfect!

‘For the flooring, we got tiles from Wickes, and the heart lights were from Amazon.

‘For the windows, I bought cream PVC Venetian blinds from ebay – for all four it cost around £95.

‘For the front one, we knew that it wouldn’t sit flush against the window as they are slanted, so Mark had the great idea of fitting small hooks to the shelf at the bottom of the blinds so that they can hook behind and stay flush to the window. 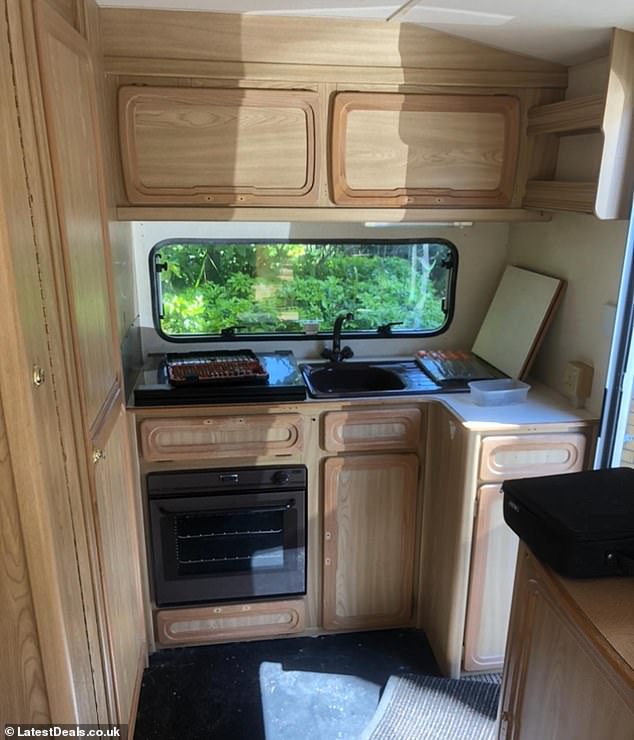 Melanie explained the cost of caravans have increased because people aren’t able to travel abroad easily at the moment. Pictured: The caravan before renovations

‘A tip is if you are going to use blinds then always put them up for travel as the wobble will put them out of place if they are left down.

‘We found it really easy to do during the lockdown as we utilised ordering online with home delivery or click and collect so didn’t have to spend hardly any time in a store.’

Delighted with the results of the caravan, Melanie explained why she believes now is the perfect time to take on your very own caravan renovation project.

‘Caravan sales have gone sky high as people cannot go abroad as easily as in the past,’ she added.

‘Old vans need to be renovated due to damp issues and most of the younger generation don’t like the drab old brown and want to put their own unique stamp on caravans.

‘At one point there was a stigma with caravans only being for ‘old people’, but now it’s become very trendy to own a caravan!

‘We spent around £1,700 in total on the purchase and doing it up. It took eight weeks. 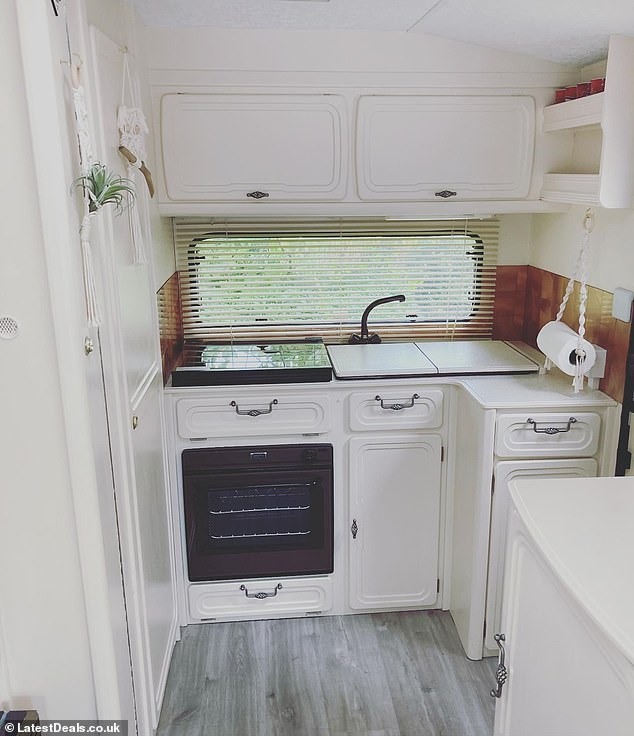 Melanie said the caravan has become their home away from home. Pictured: The caravan after the renovations

‘It was such an achievement to be able to say ‘we have done all this work ourselves and made it our own’ rather than spending thousands of pounds that we don’t have on a brand new, all-singing, all-dancing caravan that is generic in colour and specification and not how we would have wanted it.

‘It’s our home from home and might not be to everybody’s taste but we love it.

‘A new two-berth Lunar Clubman is around £20,000 so we have saved thousands.

‘We can have the same memories and fun in our 25-year-old caravan that we would have in an expensive brand new one!’

Tom Church who is co-founder of LatestDeals.co.uk, added: ‘It’s incredible to think that a brand new caravan costs £20,000 and that Melanie and Mark have done this all on their own for a fraction of that!

‘By using their own DIY skills and affordable materials, the couple now have a caravan that’s good as new – for less than 10% of the price of a new one!’