Couple reveal how they were swindled out of £14,000 by an elaborate scam building company

A couple saved for years to fund improvements to their home – only to lose £14,000, in a sophisticated fraud involving a scam building company, a fake show home, and an ‘architect’ who didn’t know how to use a tape measure.

But the business was set up by two conmen with no intention of ever carrying out any building work, and soon after taking the couple’s cash for a deposit, it was declared bankrupt.

At least 60 other victims across the Home Counties were also targeted, netting the criminals an estimated £800,000. Four people involved in the scam have now been sentenced.

Office worker Theresa said: ‘It took us a long time to save up for our extension. In 2017, we were finally ready to start work. We got several builders’ quotes, before finding CHI online.

Theresa Sunich, 50, from Surrey, and her husband Graham, saved up for many years so they could build an extension – only to get conned out of £14,000 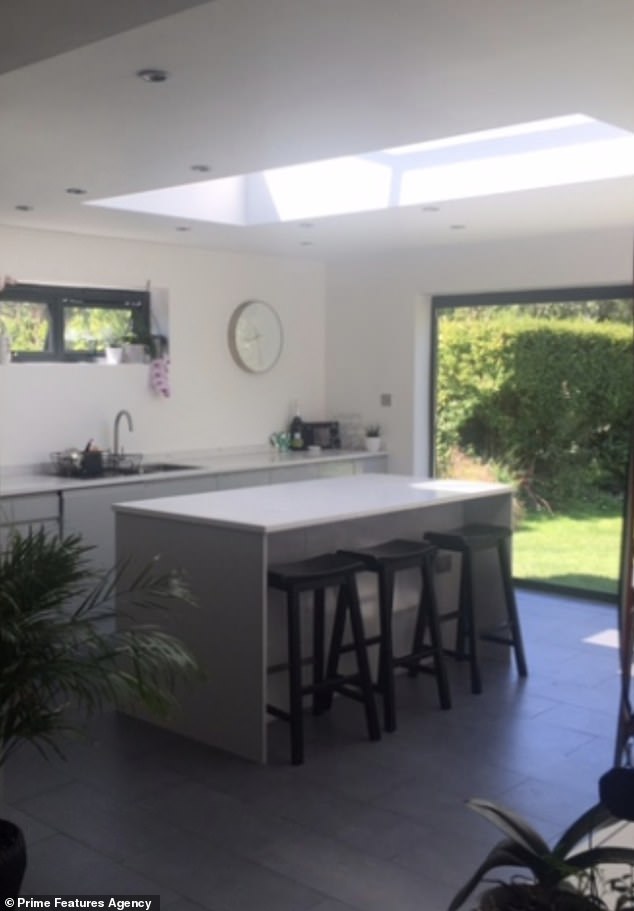 As part of the elaborate scam, potential customers were shown a fake show kitchen, in a bid to attract them to Contemporary Home Improvements 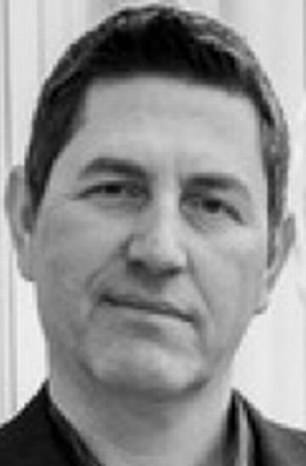 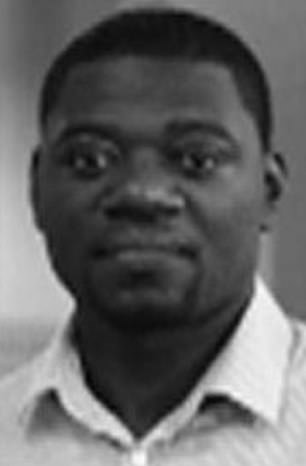 Scott Baker (left) was sentenced to four years in jail for his role in the ruse. David Gogo, a student who pretended to be a fully qualified architect was given a suspended sentence (right) The criminals involved in the scam are estimated to gave netted about £800,000, targeting at least 60 other victims as well as Theresa and Graham 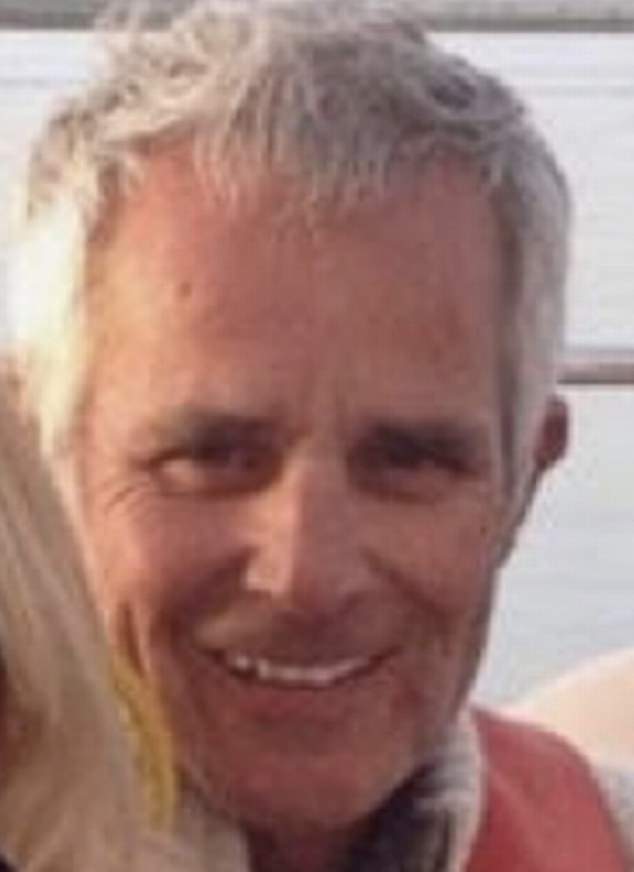 Brian Tutton, who set up CHI and ran the con with the help of Scott Baker, was jailed for seven years

‘The firm had an impressive website with pictures of their work, and a head office address in Shelton Street, Camden.

‘We checked them out and they belonged to the Federation Of Master Builders, were on a trade recommendation website and were registered with Companies House – they looked completely legitimate.

‘I spoke to a CHI salesman called Scott. He came to our place, and later gave a quote for just under £50,000, not including kitchen units and appliances.

‘I asked if they had any showroom we could view. He said the showroom wasn’t yet open, but there was a previous satisfied customer willing to allow us to look at their home.

‘I met a CHI representative at that property. While we were still looking round, the female homeowner turned up.

‘I quizzed her about the quality of the work and noticed she wasn’t particularly friendly or forthcoming, although she did say she was very happy with the company.

‘The show home looked extremely impressive and swung it for us, so we decided to go with CHI.’

In July 2017, the couple paid a £14,000 deposit from their life savings, and had a visit from a man supposed to be their architect.

‘But when his drawings arrived, they weren’t particularly good,’ continues Theresa. ‘We asked for them to be done again, and were promised that they would be.

‘Before we handed over the deposit, CHI had mentioned starting work for us in September. But by then we still hadn’t got a definite start date out of them. It felt like they were stalling.

‘Then one day, out of the blue, we got an email from the architect stating that the company had gone bust, and the matter was in the hands of an insolvency administrator.

‘As a creditor of the company, we’d have to register a claim, but might not get any of our cash back.

‘We were devastated. We’re ordinary hard-working people who certainly couldn’t afford to lose that amount of money. 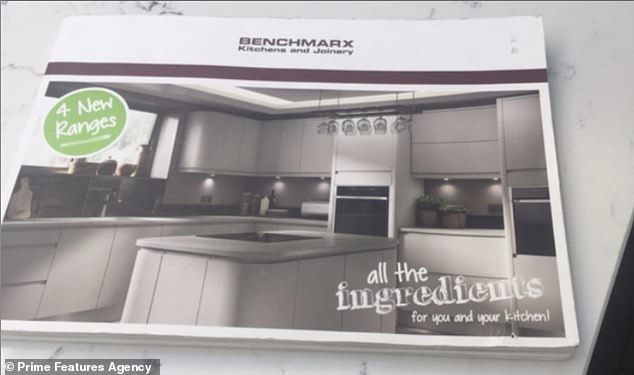 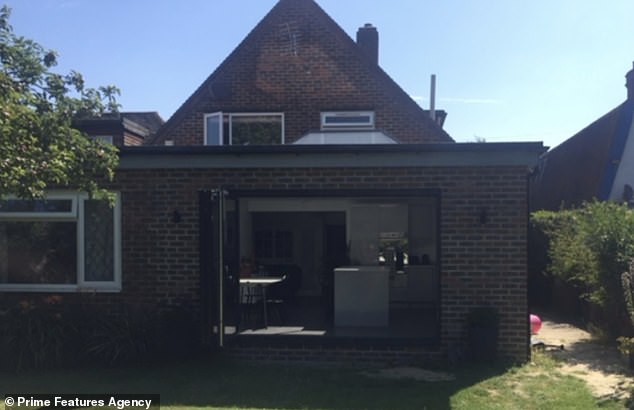 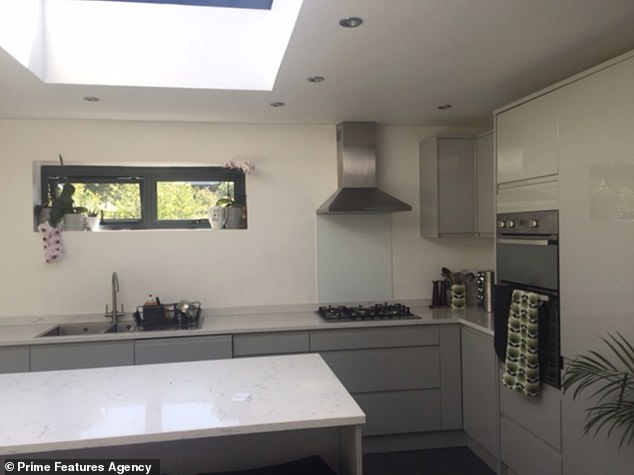 ‘But at that point, we still believed CHI was a legitimate company which had fallen on hard times.

‘It wasn’t until a little further down the line that we realised we’d been callously scammed.’

Then the couple were copied into further email which mistakenly contained email addresses of some other creditors.

Theresa says: ‘We noticed that the creditors all appeared to be individuals, like ourselves. No building supply companies were listed. Alarm bells started ringing in our heads.

‘People on the creditors email list began contacting each other – only to discover we’d all had similar experiences.’

Because of the size and scale of the fraud, police from the Met Police Fraud Investigation Team took over the case. After a lengthy investigation, four people were arrested.

But the wheels of justice ground slowly, and the pandemic caused more delays, so it was four years before the case to come to Snaresbrook Crown Court, in October 2021.

The trial ran for seven weeks, during which Theresa’s statement was among those read to the court and Graham gave evidence from the witness box. 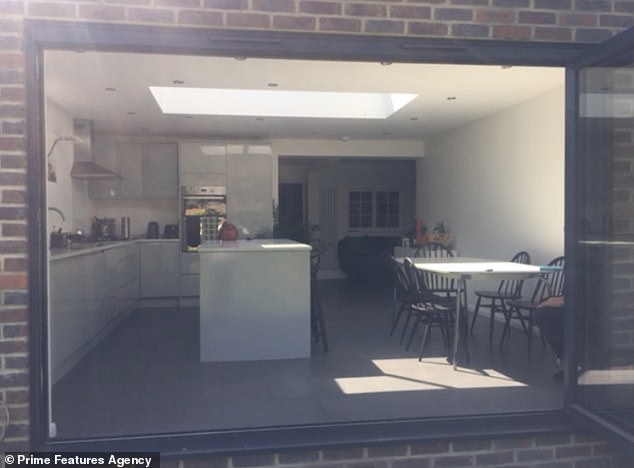 CHI paid a woman to pose as a previous satisfied customer of CHI, and show people her house, as a fake show home 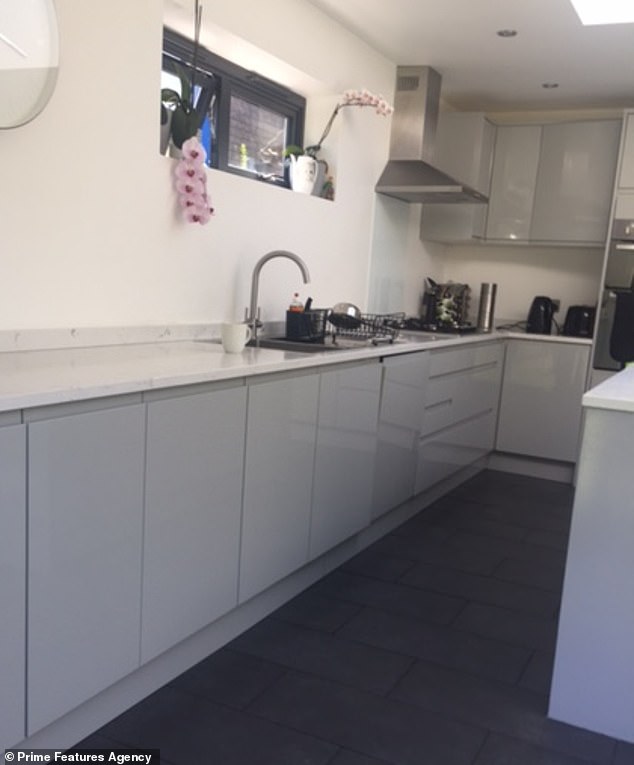 Theresa said that when she went to see the ‘show home’, the homeowner was not particularly friendly or forthcoming – but the quality of the workmanship seemed very good

The court heard that Brian Tutton, 62, set up CHI and ran the con with the help of ‘principle salesman’ Scott Baker, 50.

Fake photos of renovations were posted on the CHI website and fake reviews were left too.

Customers across London, including disabled people needing their homes adapted, handed CHI deposits for building work. But there was never any intention to start any renovations.

The court was told that the scammers used persuasive sales techniques including offering early starts for proposed work if large deposits were made, and suggesting a discount if a customer’s house could be used as a show house later.

Masters student David Gogo, 29, reassured customers and gave an impression of ‘quality and seriousness’ to the venture by pretending to be a fully qualified architect.

He carried a card falsely stating he was a chartered member of the Royal Institute of British Architects.

However, the court heard that some customers noticed he didn’t even know how to use a tape measure. He went on to fail an architecture masters degree at the University of East London.

By the autumn of 2017, when no promised work had begun, panicking households tried to contact CHI, only to find it was being liquidated. 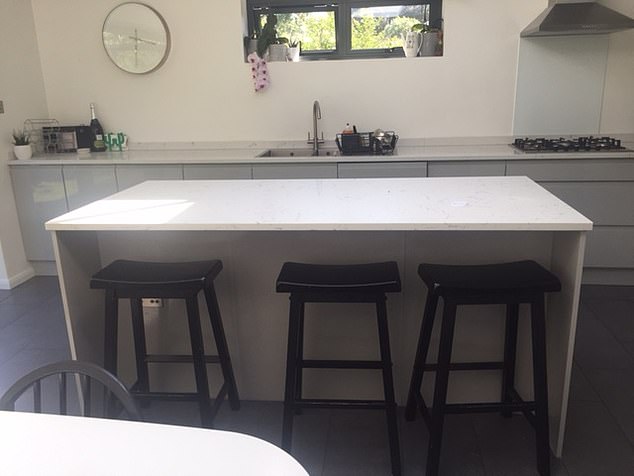 As a result of the details of the con, like the fake show home, around 60 people are believed to have been taken in, which is thought to have netted the perpetrators around £800,000 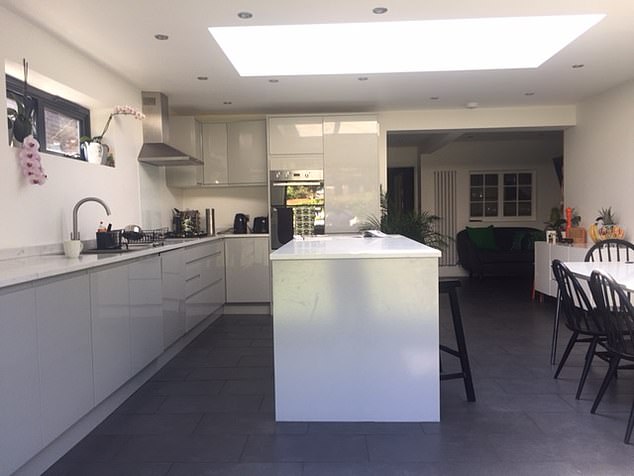 Homeowners who were duped by the company, after seeing its website, fake reviews, and fake show home, said they felt ‘humiliated’ and ‘ashamed’ for being duped

A total of 61 known households were duped by the con, but it’s thought that even more victims may have been involved. The fraud was believed to have netted the perpetrators around £800,000.

The court was told other people were involved in the fraud but investigators were unable to identify them.

The court heard victim statements, including one from Theresa, describing how homeowners felt humiliated, gullible and ashamed for falling for the scam.

Tutton, of Brighton, and Baker, of Portsmouth, were convicted of conspiracy to defraud. Tutton was jailed for seven years and Baker for four years.

Gogo, of Tooting, was acquitted of conspiracy to defraud but convicted of fraud by false representation. His 14-month prison sentence was suspended for two years.

Would-be clients were also duped by a visit to a ‘show home’ with a kitchen allegedly renovated by CHI. No work at the house was carried out by the company – in fact the work was done by a neighbour.

Property owner, Louise Shiankwang, 49, of Grinstead Lane, Lancing, was paid for allowing her home to be used. She admitted fraud and was sentenced this week (February 14) to 22 months suspended for two years.

Sentencing the male trio, Judge Noel Casey said: ‘It was a fraudulent operation from the outset designed to take the maximum deposits possible…

‘As the victim impact statements demonstrate, stress, upset, anger and suffering were caused.

‘Some households as a result had their health and mental wellbeing affected, alongside the plain obvious effects of financial loss. There has been a serious detrimental effect on victims financially, psychologically and in some cases physically.’ 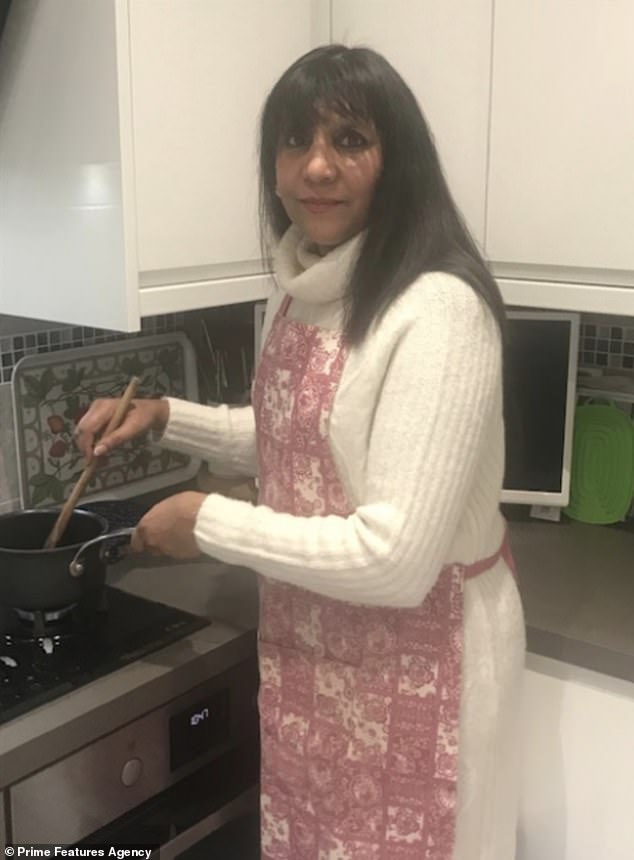 Although some of the people scammed by CHI were able to get a refund as they had paid using a credit card, Theresa and Graham had their case refused by their bank and ombudsman 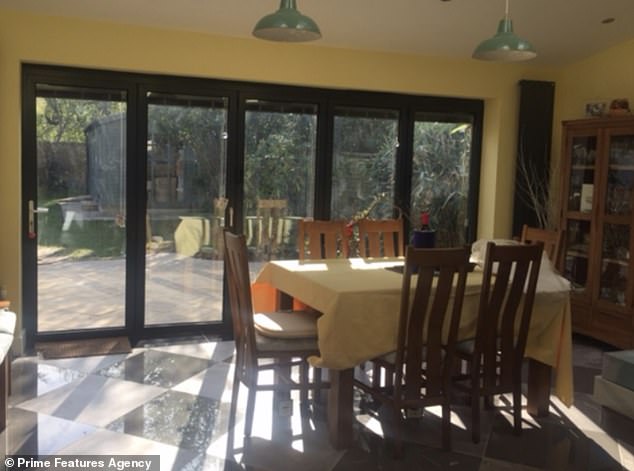 The couple eventually found a new company to do their building work (pictured), however, as they never managed to recoup their money, they had to scale backs their plans 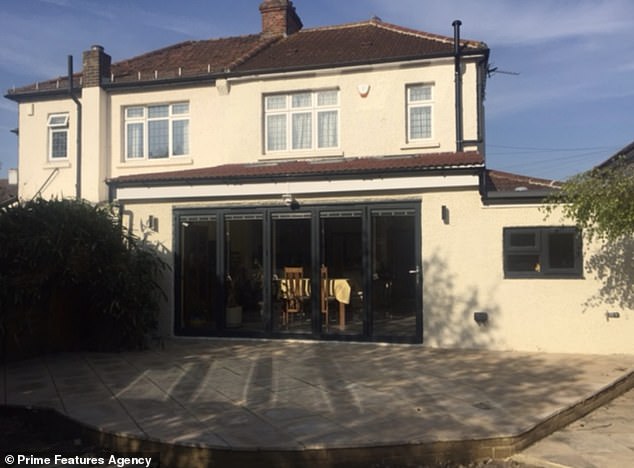 Although they are happy with the work they eventually had done on their home (pictured), Theresa says the whole experience of being conned shook her faith in humanity

The judge was unable to order the principal perpetrators to pay anything towards prosecution costs or compensation to the victims as there was no evidence they had the financial means.

Tutton was disqualified from being a company director for 10 years and Baker for five years.

Meanwhile, Theresa and Graham found another building company and in 2018 eventually went ahead with their kitchen extension, although they had to scale back their plans because of the money they’d lost.

Theresa says: ‘We are savvy people who thought we’d done all the due diligence necessary – yet still we were taken in. These fraudsters were so clever and so convincing.

‘We have heard that some people who paid the deposit on their credit card have been able to get a refund.

‘But we weren’t that lucky. Our bank just refused to consider our case. We’ve since been to the ombudsman and they sided with the bank.

‘It has left a nasty taste in our mouths and shaken our faith in human nature, but now we are determined to move on and put it behind us.’