A couple have revealed they were left heartbroken after burying the remains of their beloved cat – only for him to turn up 24 hours later.

Danielle, 30, and Sam Smith, 31, from Birmingham, were devastated when a neighbour found a dead, black and white cat, which was thought to be their 11-month-old pet Lucky on Saturday 14th May.

Sam rushed to identify the body which had almost identical markings to Lucky, before bringing the dead animal home to Danielle, 30, who broke down and fell to the floor ‘like something from a film’.

The retail worker cradled and talked to the moggy, who appeared to have been hit by a car, while landscape gardener Sam dug a grave and the couple held a small ceremony where they laid a headstone marked ‘RIP Lucky’.

Danielle, 30, and Sam Smith, 31, (pictured) from Birmingham, buried the wrong cat after thinking their 11-month-old pet Lucky had been hit by a car 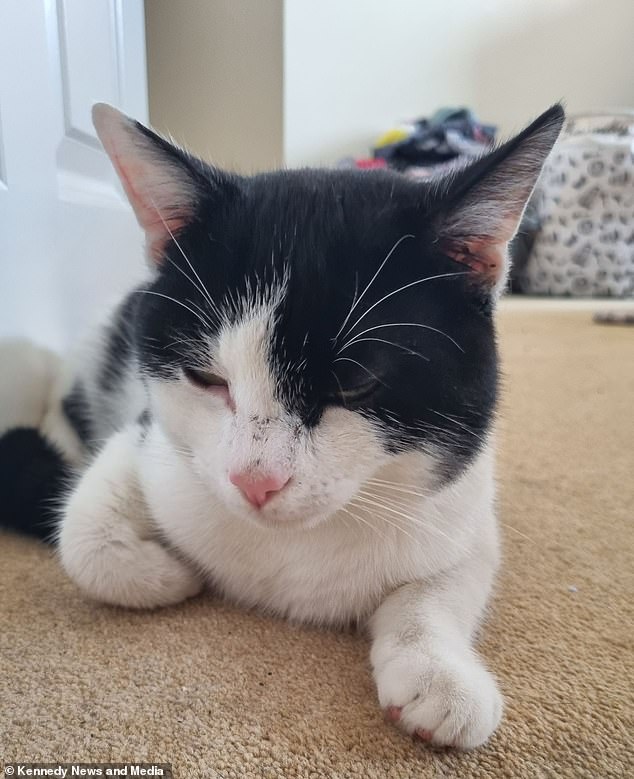 Sam rushed to identify the body of a dead, black and white cat found by a neighbour, which had almost identical markings to Lucky. Pictured: Danielle’s actual cat Lucky 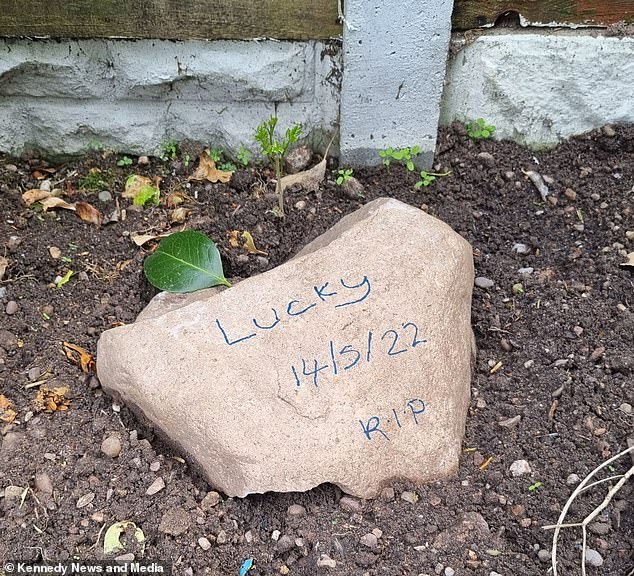 The next day while still in tears at work, mum-of-three Danielle received an image of her actual feline who had strolled through the front door and started tucking into his breakfast.

To both her relief but also horror, she realised that the pair had buried someone else’s cat.

Danielle said: ‘The whole situation is hilarious and it’s mortifying because of how distraught we all were. I still can’t get my head around it. It was a traumatic weekend.

‘A mum in a group chat for school mums messaged asking if anyone knew a black and white male cat, quite big.

‘My cat is quite naughty, he tries to get in people’s houses. So I messaged back saying “Me, what’s he up to?” and sent her a photo of Lucky, but I didn’t hear back from her so I tried calling her a couple of times. 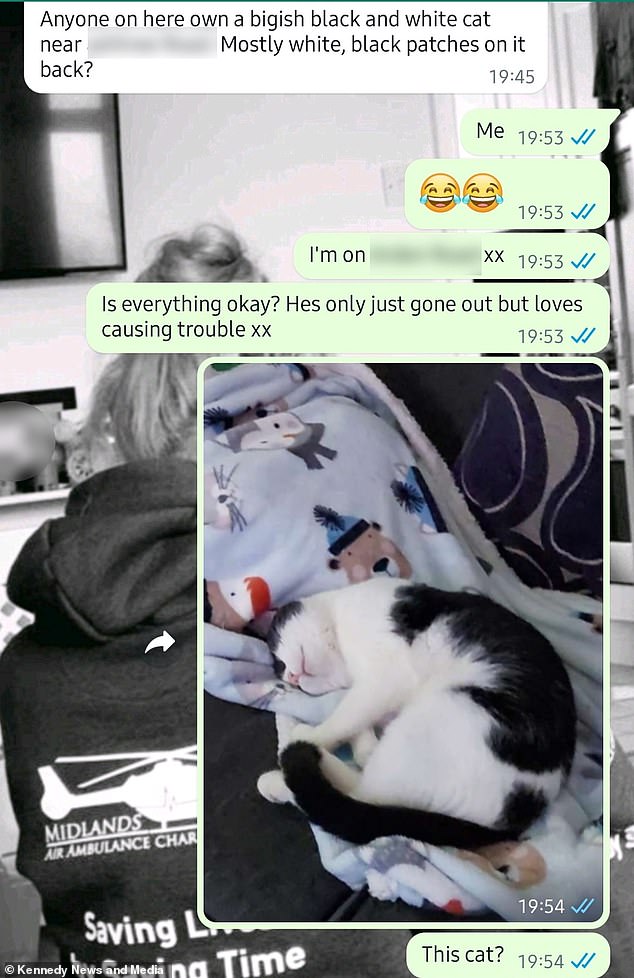 ‘I was panicking because she went quiet so I thought something had happened.

‘I was just about to get in the shower and she called and said, “I’m not sure if it is your cat from the picture that you’ve sent”, but it wasn’t a very good picture because he was on his side.

‘I asked if the cat was ok and she said it had gone, so I asked if I could send my partner round because it was only down the road.

‘He shot up on his push bike. I was upset but I was in disbelief, I thought, “It won’t be Lucky”. 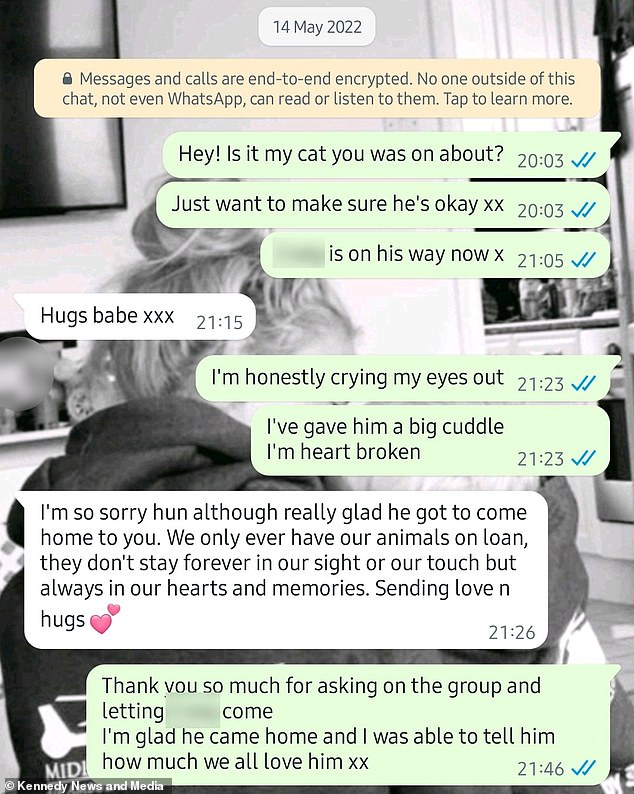 ‘I was in the shower and he came in the bathroom, looked me in the eye and said, “It’s Lucky”. I broke down and fell down.

‘I was in the shower so I got out, and Sam was saying I didn’t need to see him but I needed to see him for my own closure. It was so dramatic. I couldn’t control it.

‘They’re part of the family. The cat was in an old-fashioned potato sack. My partner was trying to stop me from looking.

‘I was bawling, snotting and dribbling, pushing him away sayingm “I need to see him” like I was in a film.

‘We opened the sack so you could see the neck down, the body of the cat and the markings were exactly the same. I was stroking him. I went to look at his face which wasn’t very nice but I wanted to make sure. 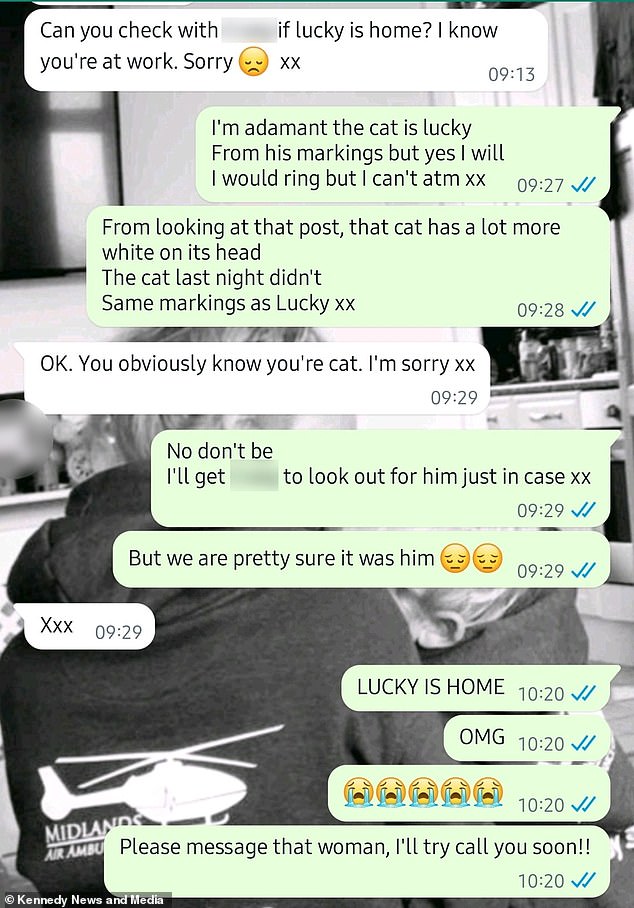 Danielle kept breaking down at work the day after burying the cat, but burst into tears of happiness after receiving a photo of Lucky

‘I had blood all over my hands from stroking him, I was talking to him saying sorry, telling him I couldn’t believe it had happened and that I loved him.

‘My partner was digging a grave in the background. It was raining as well so the whole situation was so dramatic.

‘I sat with the cat for about 20 minutes. I cried on the phone to my mum and made a Facebook post. I was bitching about people who speed when there are cats walking around.’

Danielle had gone into work the next day and had to explain to her manager that her beloved pet had passed away because she kept breaking down. 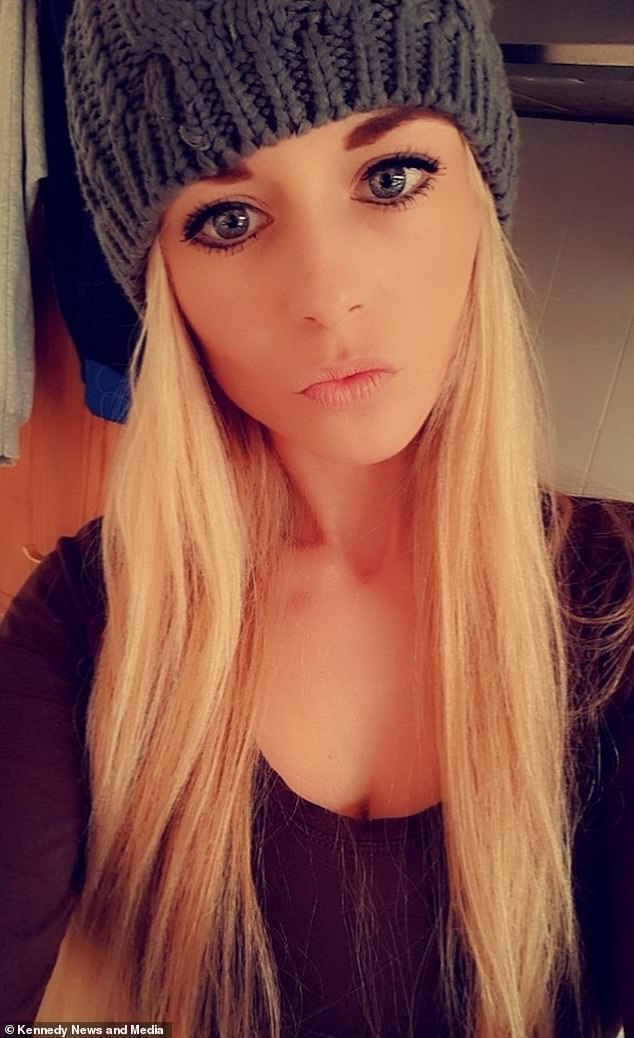 Danielle managed to track down the owner of the cat she’d buried using Facebook, and was asked to leave it buried in the garden

When she received a photo of Lucky at 10.30am, she burst into tears of happiness but it dawned on her that she’d buried somebody else’s cat.

Danielle said: ‘I went to bed but didn’t sleep. I didn’t wear make-up to work because my eyes were so puffy.

‘I kept breaking down at work, I told my managers and they were really supportive. I’d be standing at work and all of a sudden my bottom lip would go and tears would start streaming.

‘And then I got a message from the mum saying she didn’t think it was Lucky and I said it definitely was, let me just mourn him. She was really apologetic and said I know my own cat. She was so lovely.

‘There’s me still at work crying. At about 10.30, I got a Snapchat and there was my Lucky eating his food and laying in my bed cleaning himself. 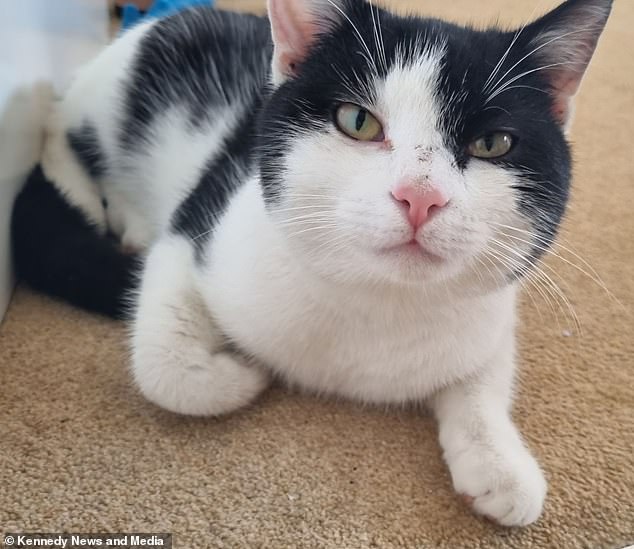 Danielle said she still gets worked up when she relives the situation, but she is ‘so happy’ that Lucky (pictured) is back

‘I burst into tears with happiness but at the same time I was thinking, “Which cat’s blood did I have all over my hands?” and whose cat did I mourn.

‘When Sam dug the grave, he put a stone on it saying ‘RIP Lucky’. It was a full-on grave. It’s such a funny situation.

‘Everyone has said it’s just typical of me and Sam. If it had to happen to anyone, it’s us.’

Danielle managed to track down the owner of the cat she’d buried who asked her to leave her pet where he’d been buried in the garden to rest.

Danielle said: ‘She posted on Facebook a photo of her cat so I messaged her saying I think her cat is buried in my garden. I explained what happened and she was so lovely.

‘I know it sounds weird but I asked her if she wanted us to dig him up so she can bury or cremate him. She said leave him to rest if that’s ok so we’ve planted some seeds there.

‘I’m relieved but I still get worked up when I relive the situation. I’m so happy that the cat is back because we’ve literally had him since the day he was born.’