A retired couple’s two-week holiday in Greece turned into a nightmare after they were met with cancellations, 70 hours of delays and lost luggage.

John Dawson, 72, and his wife Ann, 65, booked a round-trip TUI flight from Manchester to Crete, but due to ‘unforeseen circumstances’ both their outbound and return flights were impacted.

The couple, of Sheffield, South Yorkshire, were scheduled on an evening flight to  Crete on September 2, but due to a ‘disruptive passenger’ the route was cancelled.

The airline put the couple up in a hotel in Stockport, about a 10-mile journey from the Manchester airport, overnight before transporting them to London for a new flight out of Gatwick airport.

They finally arrived in Greece 27 hours after their initially scheduled departure time.

As they headed home at the end of their trip, the couple had a ‘dreadful feeling of Deja vu’ after their flight was postponed numerous times before ultimately being cancelled, delaying their arrival by 43 hours.

The Dawsons are frustrated by the experience and the alleged lack of communication from the air carrier. TUI claims it ‘kept in touch’ with the couple throughout their delays and accommodated them to the best of its ability while battling ‘circumstances beyond our control.’

John and Ann Dawson’s two-week holiday in Greece turned into a nightmare after they were met with cancellations, 70 hours of delays and lost luggage. The couple is pictured during their trip to Crete

The couple’s travel woes began on September 2 when their 6.35pm flight from Manchester to Crete was cancelled.

Mr Dawson, a former insurance agent, said they were shuttled to a hotel in Stockport and given ‘no information’ about their new travel arrangements.

The next day, the couple was picked up from the hotel and taken to London via coach for a new flight out of Gatwick airport.

Mr Dawson claims they were told the coach would pick them up around 1pm on September 3, but it didn’t arrive until 3pm. He alleged they were also ‘kicked out of the hotel as there was a wedding on.’

The couple says their journey to London was less than desirable, noting how the bus lacked a toilet and most travellers were hungry after only having eaten breakfast.

Mrs Dawson recalled how a pregnant woman, seemingly needing to use the bathroom, insisted the driver stop the coach.

The driver allegedly stopped along the traffic-filled motorway, allowing the woman to get on another coach that was following behind.

‘Traffic was flying past, we thought someone could get hit,’ Mrs Dawson explained.

When they finally arrived at Gatwick, the couple was reportedly given a £20 voucher each for food and drink.

However, the Dawsons claim the airport shops were shutting and they had few dining options. They found an open Wetherspoons, but the restaurant had closed its kitchen and was only serving drinks.

Mr Dawson says the meal voucher did not apply to alcohol, meaning he couldn’t even use to purchase a pint.

They eventually left Gatwick around 11pm, arriving in Crete in the early hours of September 4. But when they landed, the couple learned their luggage had never left Manchester.

‘Everybody’s luggage was still in Manchester. There were babies with no push chairs. We had no clothes and felt a bit scruffy and a bit fed up. We had to fill in forms to say what our luggage looked like,’ Mr Dawson recalled.

A coach then took the couple to their hotel around 6am.

Mr Dawson said a TUI representative instructed the couple to purchase some clothes and toiletries while they waited for their luggage to arrive. They were told to claim back the expenses. It is unclear if the pair has been reimbursed.

Their suitcases finally arrived at the hotel the next day around 5pm.

TUI told the Manchester Evening News that the outbound flight was delayed as a ‘disruptive passenger’ had to be offloaded, taking crew over their maximum legal working hours.

The last minute delay meant luggage could not be taken off the flight, but was sent to customers the next day.

A spokesperson said: ‘We fully understand Mr and Mrs Dawson’s frustrations and sincerely apologise for the delays they encountered travelling to and from Heraklion.

‘Whilst we do everything we can to get customers on holiday and home again on time, sometimes there are circumstances beyond our control that don’t make this possible.

‘And regrettably in the Dawson’s case, a combination of unforeseen circumstances impacted both their outward and return journeys. Our teams kept in touch with them throughout their delays and we provided accommodation, transfers meals and details of how to claim the compensation they are entitled to under EU 261 regulations. We’d like to thank them for their patience and repeat our apologies for their unfortunate experience.’

The Dawsons took some time to recover from the 27 hours of chaos and went on to have a lovely holiday, until they tried to get home.

‘At least it can’t be as bad on the way back,’ Mr Dawson remembered telling his wife, before adding: ‘But it was.’ 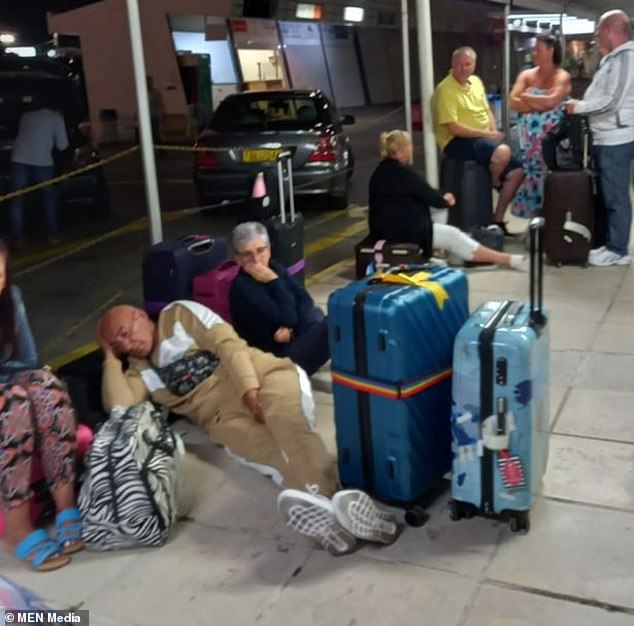 The couple had booked a round-trip TUI flight from Manchester to Crete, but due to ‘unforeseen circumstances’ both their outbound and return flights were impacted. People are seen sleeping on the floor at the airport amid the delays

The pair were scheduled to fly from Heraklion airport to Manchester at 1.55am on September 17. They claim their flight was delayed multiple times before the airline ultimately cancelled the route.

‘We travelled 20 yards on a bus to get the luggage off the plane, then we were kicked out of the baggage area and had to hang around for two to three hours. People were sleeping on the pavement outside,’ Mr Dawson recalled.

‘As daylight came up we were put on a coach and sent to a hotel nearby for 10am, in time for breakfast.’

He says they received a text saying would be picked up at 5pm that day to fly at 8pm. But the couple say once they were back at the airport and were practically at the gate about to board, they were told the flight had been cancelled again.

With a dreadful feeling of Deja vu – the exhausted pair were taken to another hotel, where they stayed overnight. He says after being given numerous flight times they eventually flew home on September 19 at 3.30am arriving back in the UK at British time 6am – 43 hours later.

Mr Dawson says while he understands mistakes happen, he says all communication was via apps and texts.

He said: ‘I understand mistakes in life happen, but there was no correspondence. I booked my holiday in a shop and I don’t have modern technology and an app.’

Commenting on the delayed return flight, TUI said that the company ‘fully understands customers’ frustrations’ and thanked passengers for their ‘patience and understanding’.

‘We fully understand customers’ frustration due to the delay of flight TOM2571 from Heraklion to Manchester, which was unfortunately delayed due to a technical fault which meant the aircraft needed to remain in Heraklion overnight,’ a company spokesman said.