Couple thrown out of Moscow cab after having sex

A randy Russian couple had a short ride home when they were thrown out of a taxi in Moscow for romping on the back seat.

The pair had asked the taxi driver in to be taken home, and took the opportunity to engage in some lovemaking during the drive.

Little did the pair know that the driver is a video blogger known to his YouTube followers as ‘Hardworking Cab Driver’, and their amorous appreciation for each other was caught on camera.

Raunchy ride: The Moscow-based taxi driver can’t stop himself from giggling when the couple in the back start having sex

Moments after climbing into the back of the car, the pair start snogging before the woman clambers on top of her partner.

As the couple romps away the embarrassed cabbie can be seen smirking and trying to ignore the excited couple.

They then ask him if he can leave them for a while so they can finish in private.

He is heard telling them: ‘Are you out of your minds? I should leave my car so you can have sex in it? Go to the pub and do it there.’ 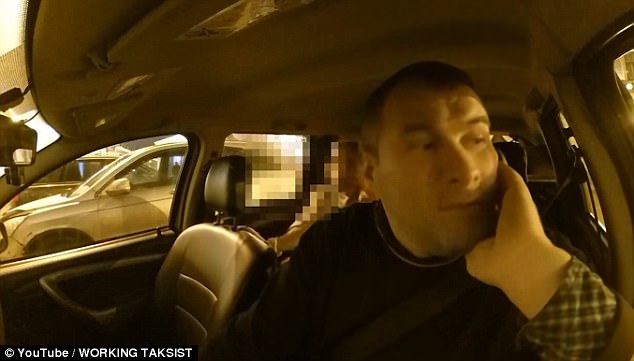 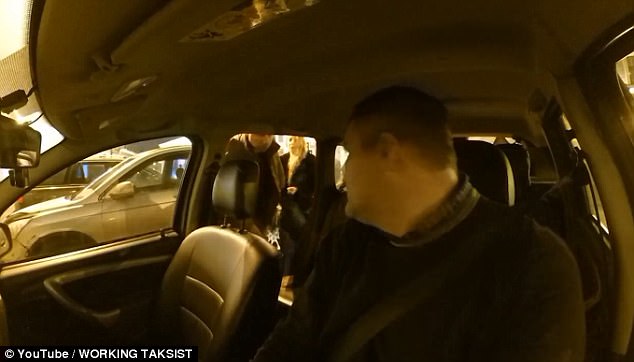 Get out: When the couple ask him to park up to let them continue, he tells them to leave

As the couple pay the driver his £5 fare he is heard thanking them and telling them to have a nice time in the pub, before exclaiming to camera: ‘They are f***ed up, they can shove their animal instincts up their a****.

‘They wanted to f*** inside my car. He asked if I could walk around my car for ten minutes, as if, like, he could last ten minutes.’

The driver uploaded the video to his YouTube channel where it has now been viewed over 25,000 times.

One viewer called Oleg Sobaka reacted: ‘He should have thrown them away right away, f*** he even talked with them. He should have stopped as soon as he saw what they were doing.’

Another called Artyom Sobolev posted: ‘They are f***ing animals. I would have thrown them out when she got on top of him.’

While Dima Povod quipped: ‘He should have agreed to leave the car with the condition that he could join them later.’