Couple who fell 3,000 feet to their deaths from Yosemite’s Taft Point identified as travel bloggers

Yosemite National Park officials have identified the bodies of two people who fell from a popular overlook and were recovered Friday.

National Park Service spokesperson Jaime Richards said the couple were Indian nationals Vishnu Viswanath, 29, and Meenakshi Moorthy, 30. Both were living and working in the US, according to NBC Bay Area.

Viswanath appears to have been a software engineer at Cisco in San Jose, according to a LinkedIn bio.

Yosemite National Park officials identified the couple who fell to their deaths at Taft Point as being Meenakshi Moorthy, 30, and Vishnu Viswanath, 29 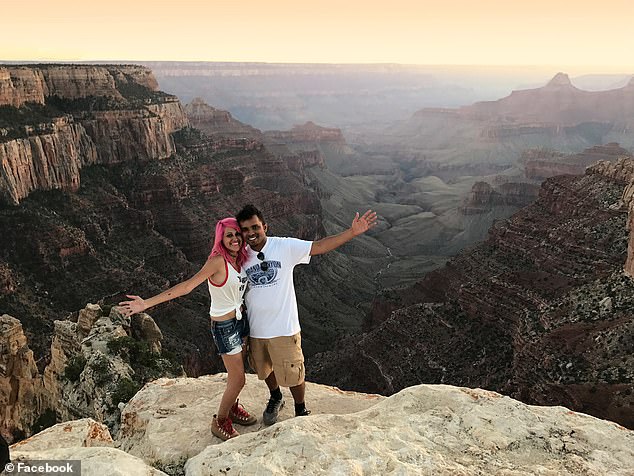 The couple were Indian national living and working in the US. In addition to regular 9-to-5 jobs, they ran a travel blog, Holidays and Happily Ever Afters, and popular Instagram account

Viswanath and Moorthy appear to have shared the travel blog, Holidays and Happily Ever Afters, in which the married couple posted their musings about their world travels.

In the blog’s introduction page, Moorthy wrote that she had ‘a serious case of an insatiable wanderlust running through my blood, obsessed with all the beauty this planet beholds and constantly making plans (or dreaming) for our next trip’ and stated that she was an ‘ardent adrenaline junkie, roller coasters and skydiving does not scare me.’

Moorthy wrote that Viswanath had been the one to introduce her to ‘the travel bug’ after taking her to the Maldives, ‘which triggered the wanderlust in us to see and experience the unexplored vistas and exciting cultures this amazing world has in store. Soon after that we found ourselves roving through Europe and now we are in the U.S. And all this with the clichéd 9-5 jobs.’ 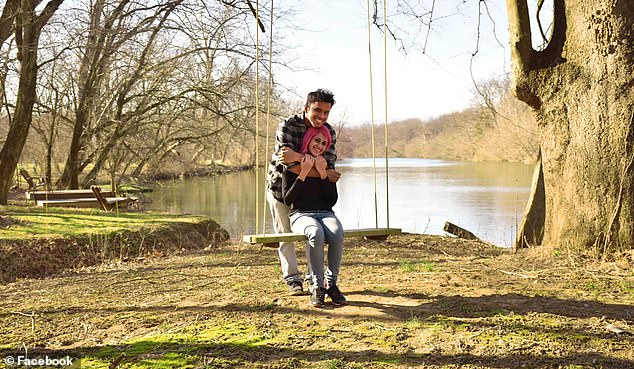 Moorthy wrote that she had a ‘insatiable wanderlust running through’ her blood and that her husband, Viswanath, had introduced to the ‘travel bug’ 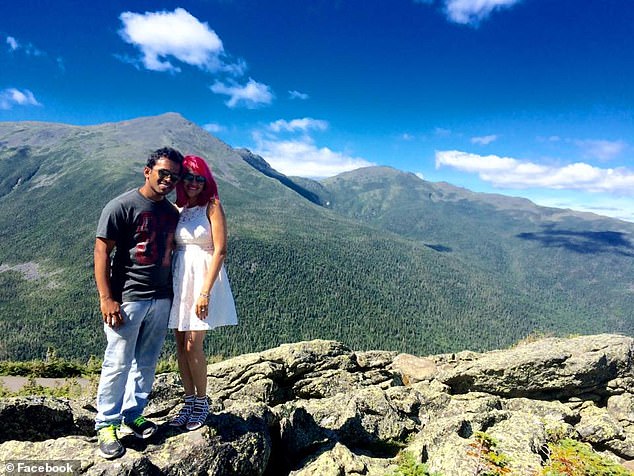 Moorthy also wrote that she was an ‘ardent adrenaline junkie’ who wasn’t scared of roller coasters and skydiving, and constantly dreaming of the couple’s next trip 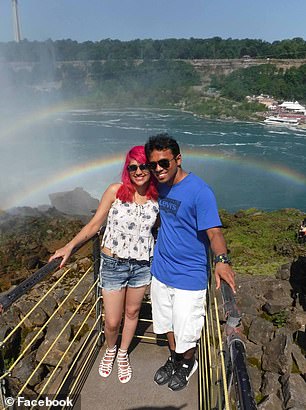 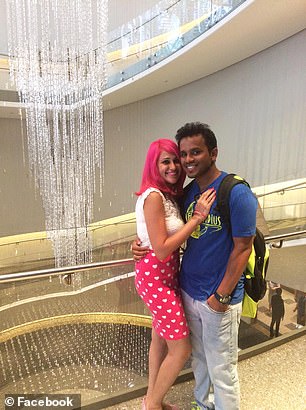 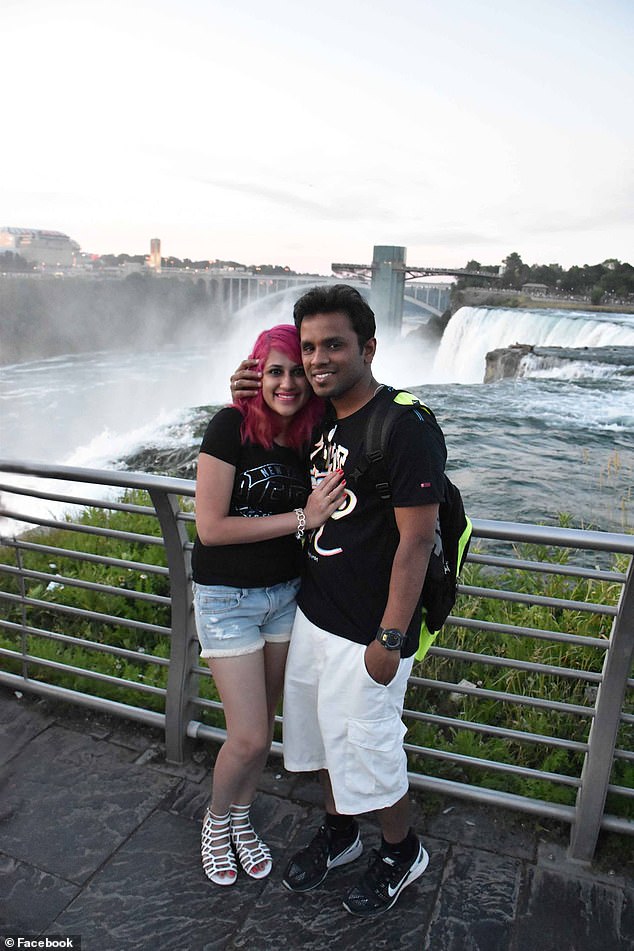 The couple’s blog showcased their travels around the world. Their Instagram account was last updated on October 17 with a picture of Moorthy in Vermont

She also wrote that Viswanath was the photographer behind the host of pictures that appears on the blog and their Instagram page, which was last updated on October 17 with a photo of Moorthy in Vermont.

Viswanath and Moorthy’s bodies were first spotted and reported by a tourist on October 24. Rangers then worked to recover their bodies the next day.

Officials are still investigating when the couple fell and from which spot at the overlook 3,000 feet (900 meters) above the famed Yosemite Valley floor.

Railings only exist at a small portion of Taft Point, which offers breathtaking views of the valley, Yosemite Falls and towering granite formation El Capitan.

Visitors can walk to the edge of a vertigo-inducing granite ledge that does not have a railing and has become a popular spot for dramatic engagement and wedding photos.

Just last week, photographer Matthew Dippel snapped an engagement photo of two strangers on Taft Point. The picture shows the exact moment a man got down on his knee to propose to the woman he was with as they stood next to the cliff edge.

The photo went viral after Dippel turned to social media for help with tracking them down. He succeeded in identifying the couple — Charlie Bear and his fiancee Melissa — on October 27. 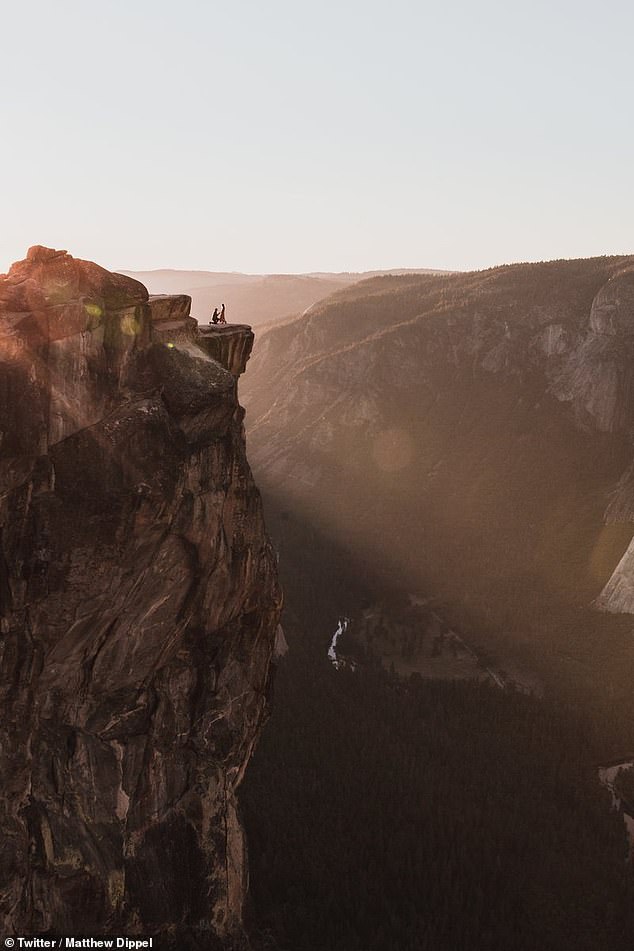 The couple fell to their deaths from a popular overlook at Yosemite National Park, just a week after a photographer captured a viral engagement photo (pictured) over the same viewpoint 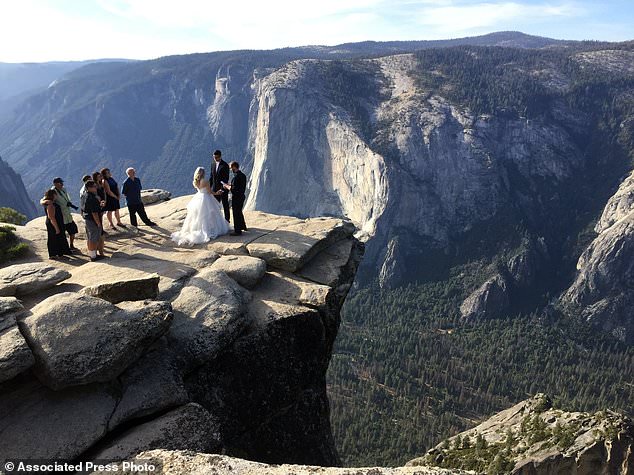 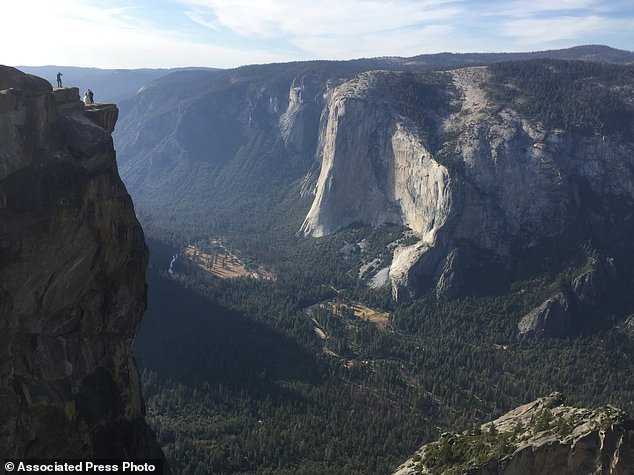 Park rangers are still trying to determine when the couple fell and from what spot at Taft Point they had fallen from. Their bodies were spotted Wednesday by a tourist (file image) 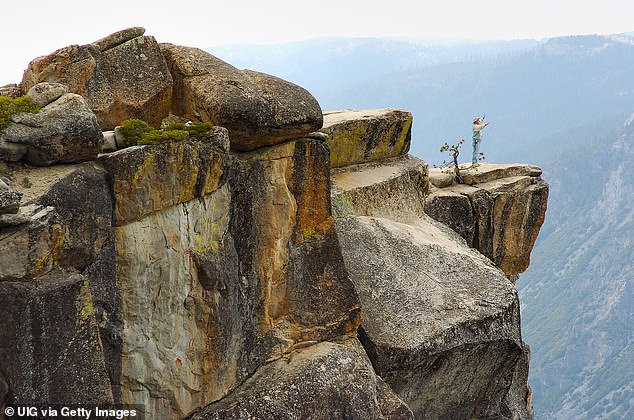 Railings only exist at a small portion of Taft Point, which offers breathtaking views of the valley. Visitors can walk to the edge of a vertigo-inducing granite ledge (file image)

More than 10 people have died at the park this year, six of them from falls and the others from natural causes, Gediman said.

An Israeli 18-year-old accidentally fell hundreds of feet to his death last month while hiking near the top of 600-foot-tall (180-meter-tall) Nevada Fall.

The death of 18-year-old Tomer Frankfurter was considered an accident, the Mariposa County coroner’s office said.

In 2015, world-famous wingsuit flier Dean Potter and partner Graham Hunt died after jumping from Taft Point in an attempt to clear a V-shaped notch in a ridgeline. They were at flying in wingsuits but crashed.

The activity is the most extreme form of BASE jumping, which stands for jumping off buildings, antennas, spans (such as bridges) and Earth and is illegal in the park.