A couple who sold everything to live on a converted school bus before narrowly escaping bankruptcy say they would rather die than go back to their old lives.

Tawny McVay, 34, and her husband Michael, 31, from Billings, Montana, previously had a family gym business, a three-story house and a nice car – but they weren’t happy.

After watching a bus life renovation video in spring 2018, they started to research homes on wheels. Just two months later they put their home on the market and sold almost everything they owned including their family business.

The couple has covered about 5,000 miles having traveled across the Pacific Northwest, Montana, Idaho and Wyoming and plans to head to southwest USA during the harsh months of winter 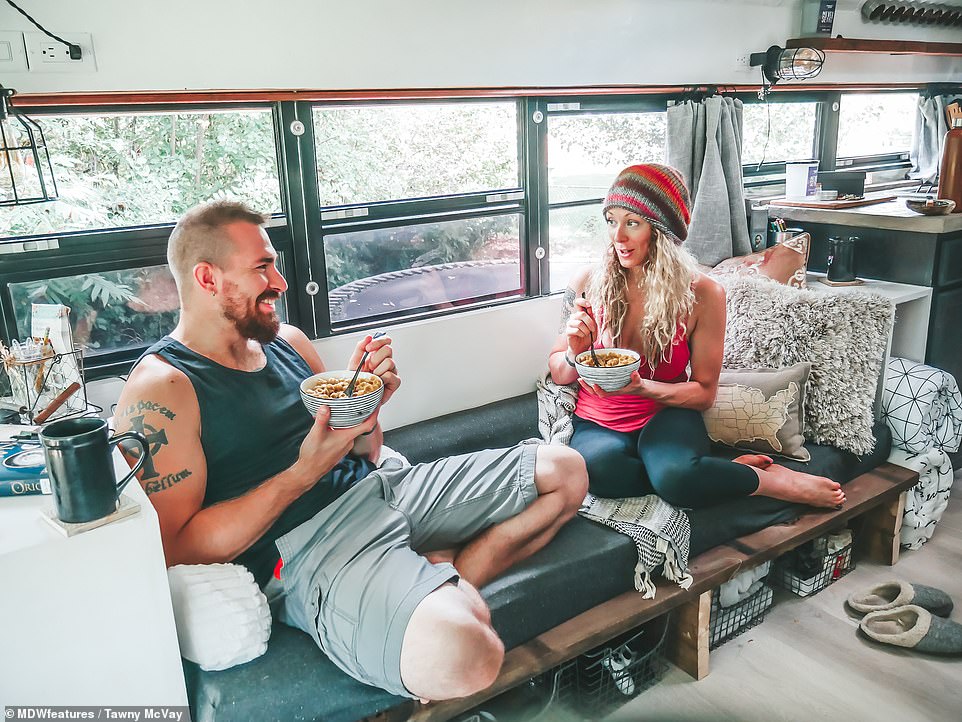 Tawny McVay, 34, and her husband Michael, 31, from Billings, Montana, who sold their belongings to live life on the open road in a converted school bus 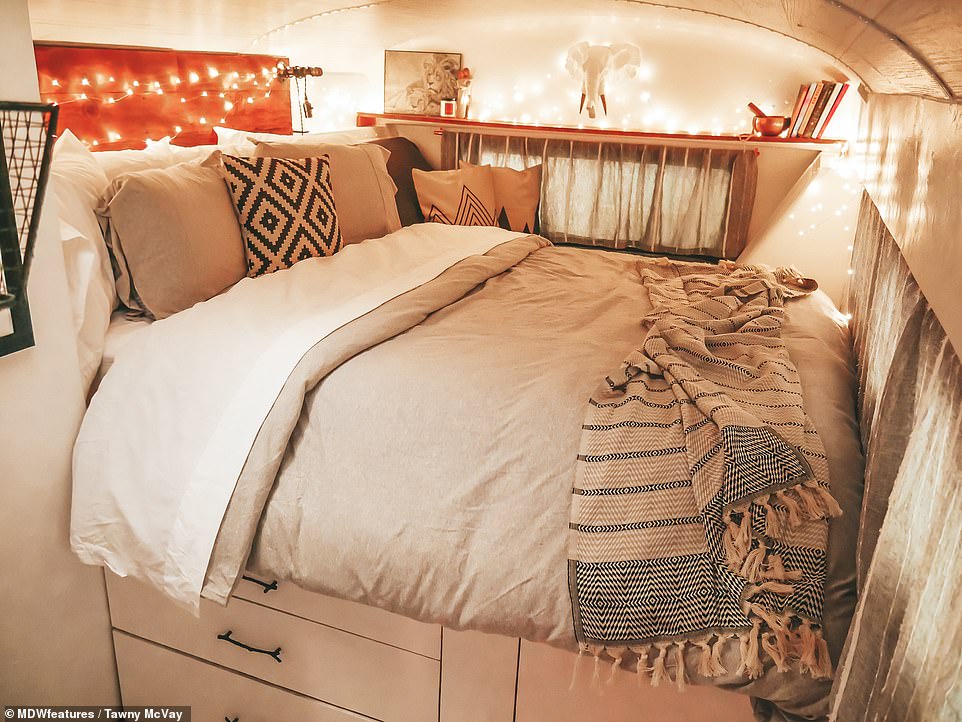 The couple created their own bedroom on board the bus. They plan to travel to the Southwest of the USA for winter 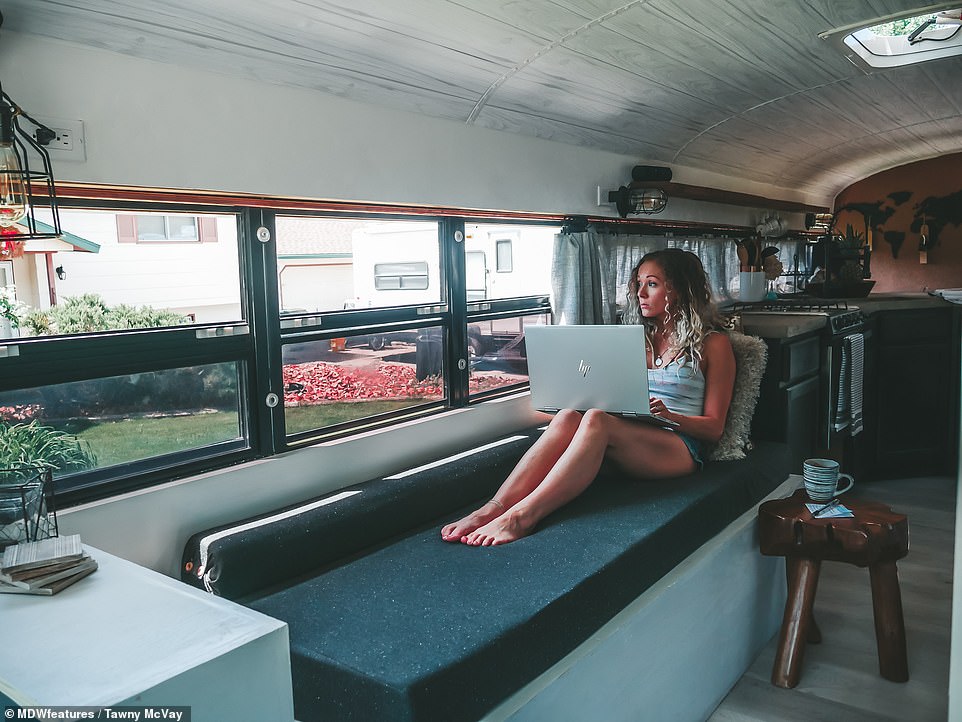 Before buying the bus, Tawny and Michael owned a family gym business, a three-story house and a nice car – but they weren’t happy 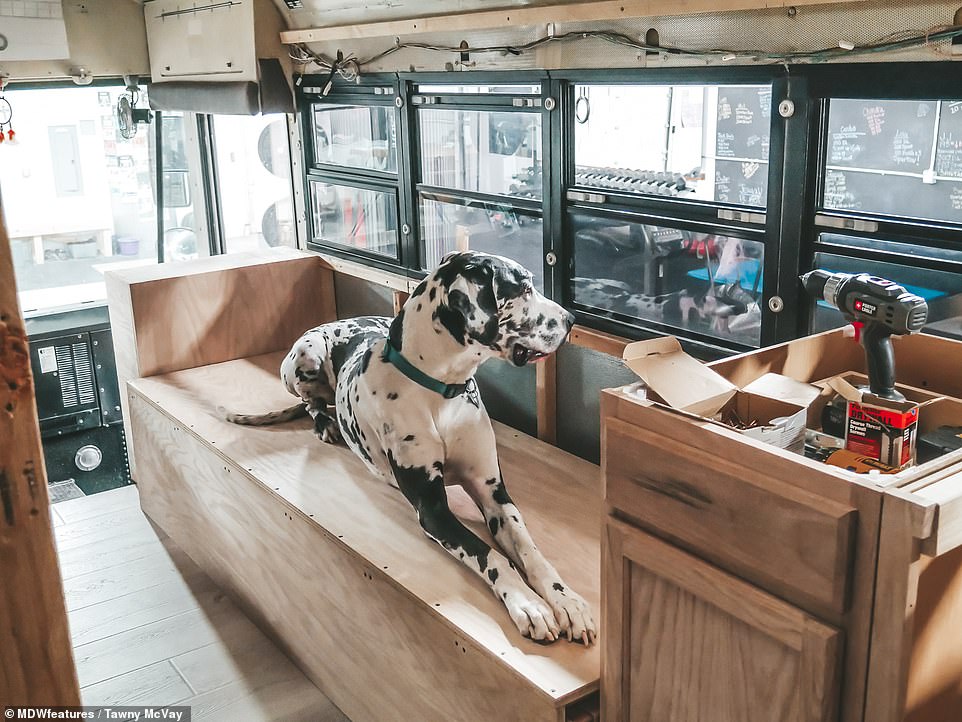 The couple’s dog Apollo during the renovations. They spent $15,000 converting the bus into a home

They found buyers for their business and home but both fell through after they’d bought their bus.

Struggling to make ends meet, they had to live with family for six months and Tawny and Michael came within a week of bankruptcy.

But finally their house and business sold and they could look forward to living life on the road. 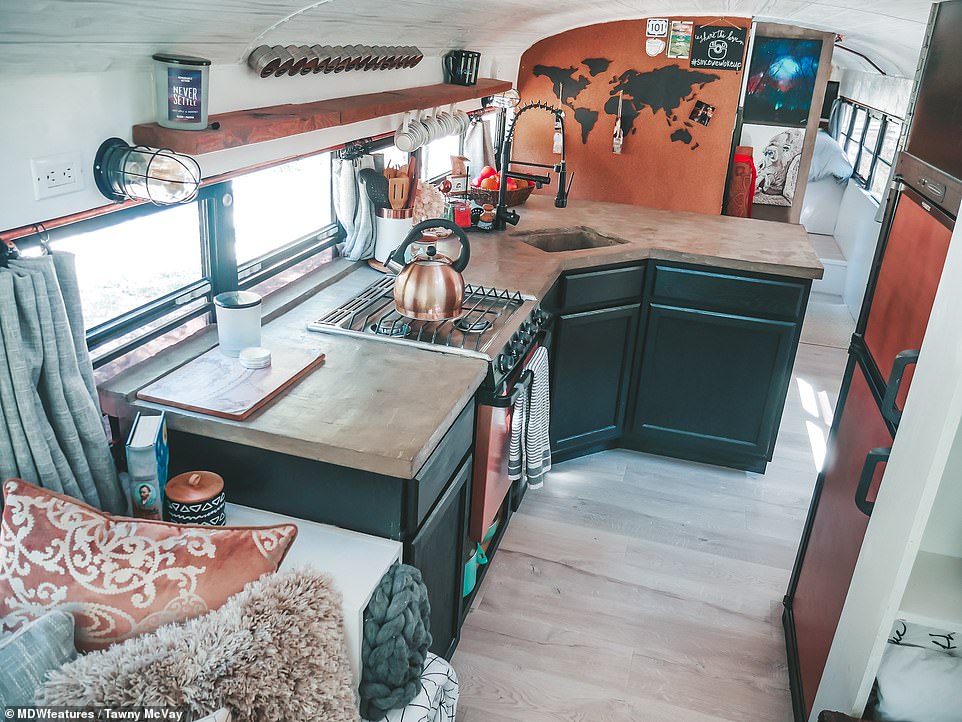 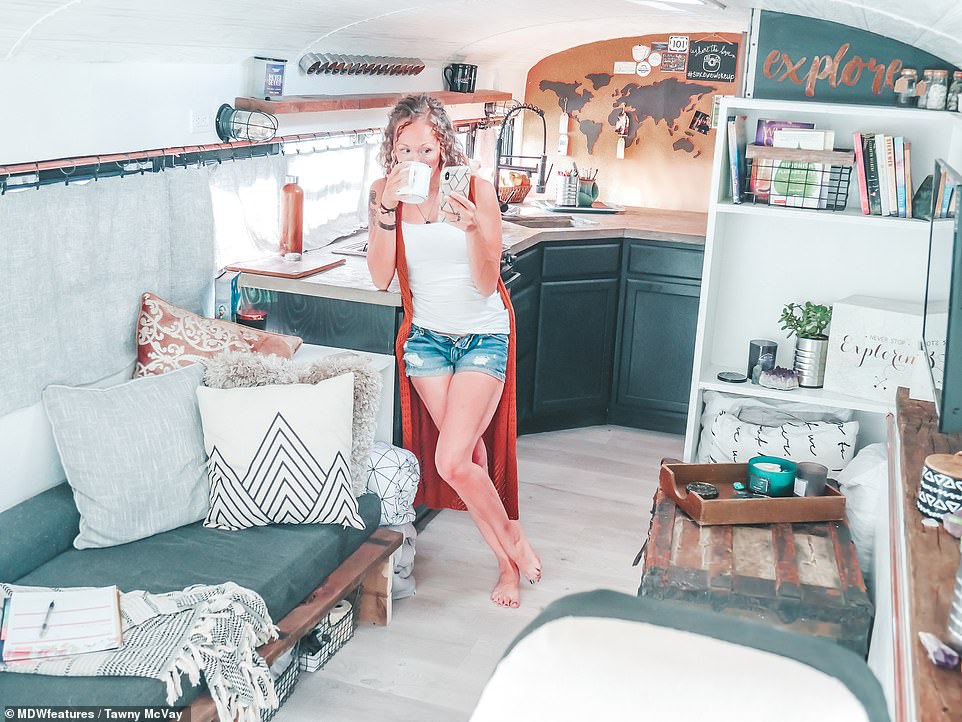 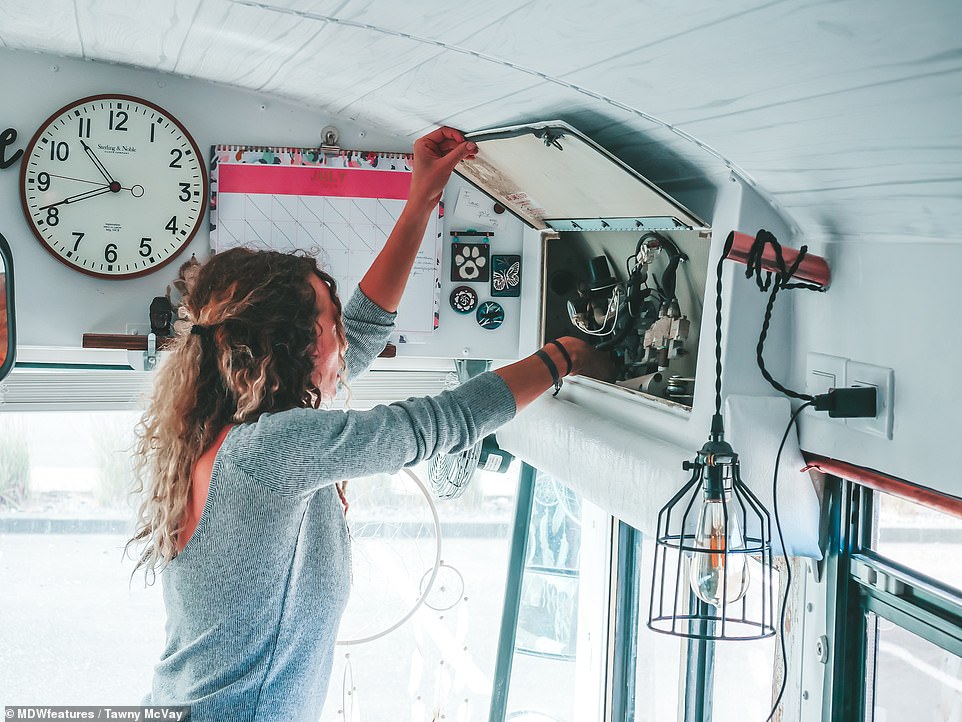 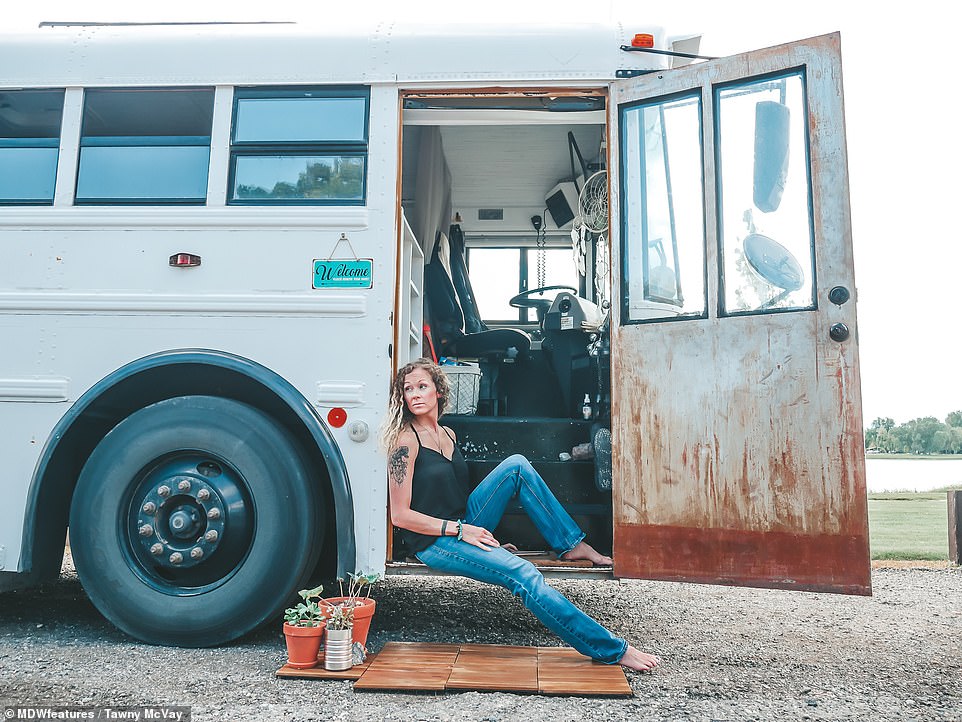 Tawny explained: ‘Every lifestyle comes with pros and cons. Having a home on wheels isn’t always an easy choice’ 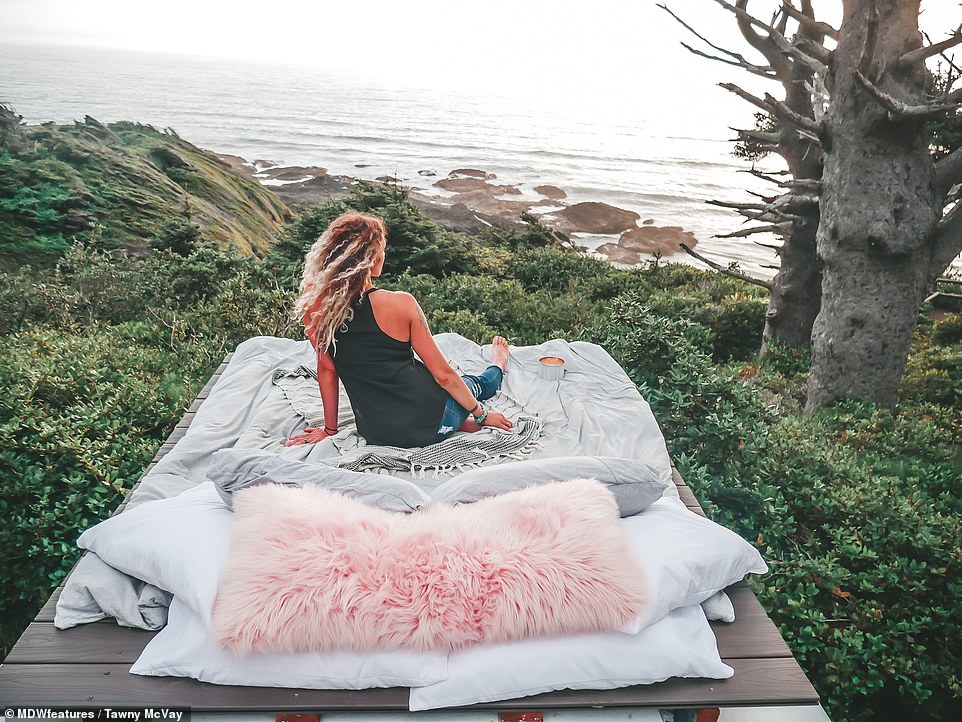 Tawny explained: ‘To be honest, as the saying goes, we would rather die on an adventure like this than live standing still’

Tawny said: ‘We owned a business, a three-story home and all the usual means of measuring success. We were classed as successful and should have been wildly happy, but we weren’t.

‘In early spring of 2018, we saw a documentary about a couple who converted a school bus into a tiny home. We did some research and put our house on the market a few weeks later.

‘Within two months, we had sold most of our belongings, and had the house and our business under contract. We searched and searched for the perfect bus, finally found it, and with everything tied up, we bought the bus and jumped in. 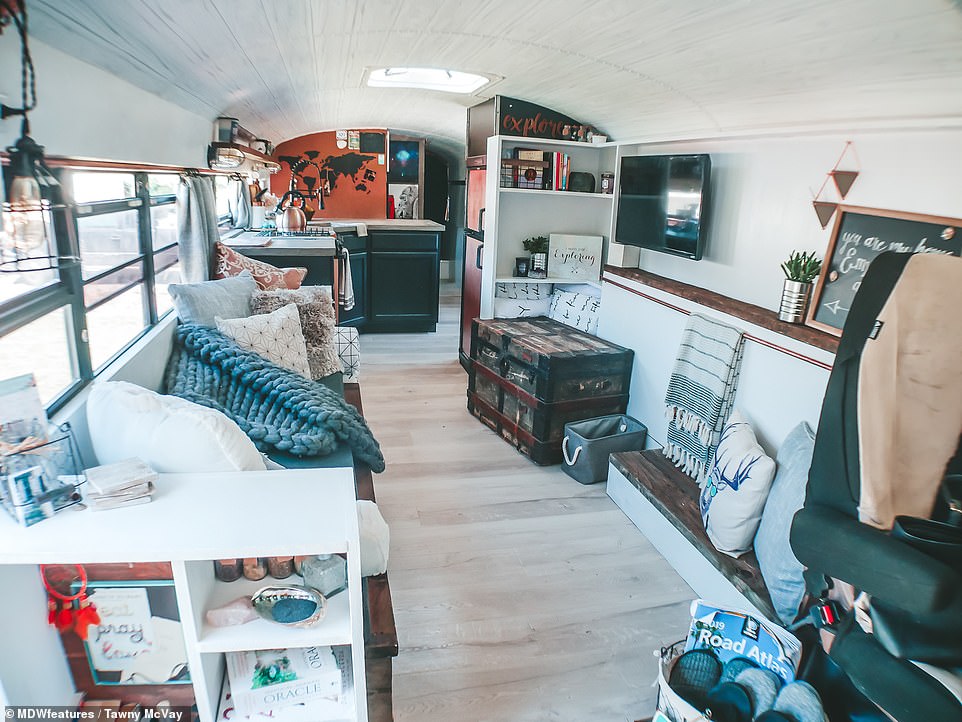 The living area on the converted school bus, which comes complete with a Murphy bed 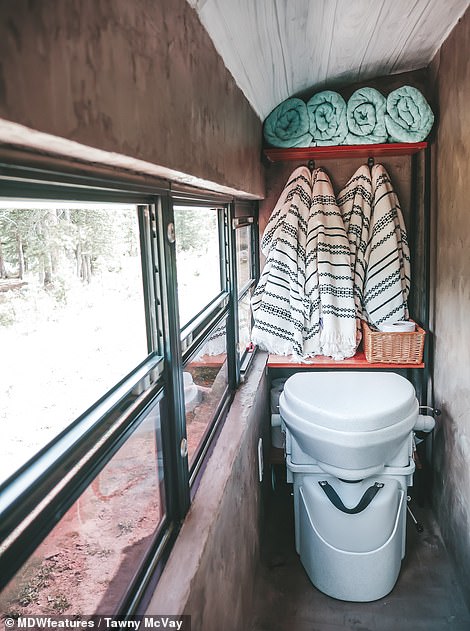 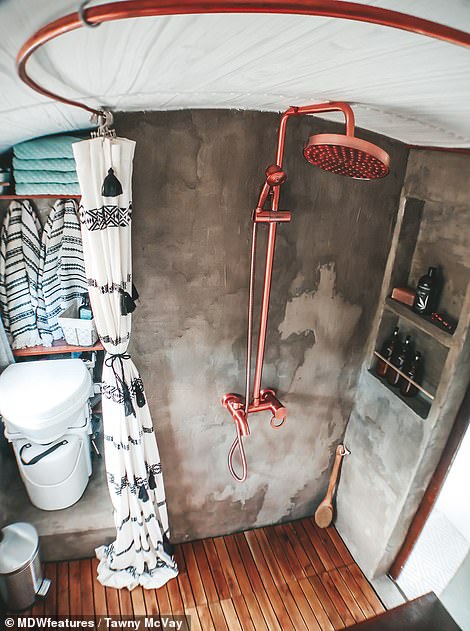 There are bathroom facilities onboard the bus, including a composting toilet, left, and a shower 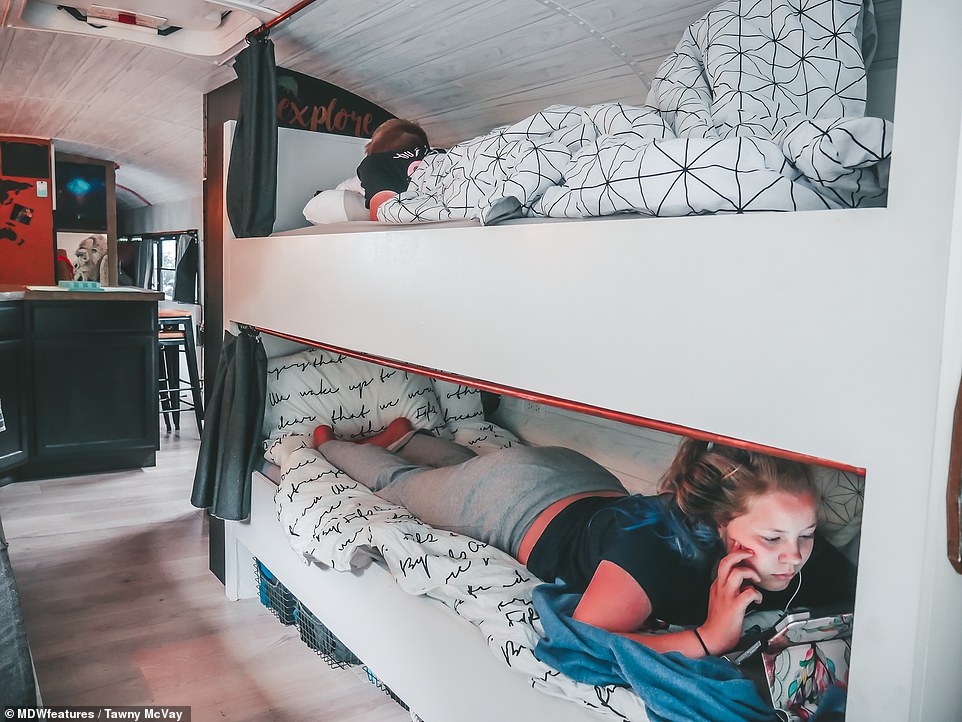 ‘Then disaster struck. Our house fell through two days before closing the deal and the person buying our business pulled out. Now we were screwed.

‘We had to move in with Mike’s parents and it was a very taxing six months. According to the numbers we were a week away from bankruptcy. But thankfully the house sold and we managed to move onboard.

‘We did the renovation work ourselves along with help from my dad and brothers.

‘It has a living area with a Murphy bed, a full kitchen with a range cooker and fridge, bathroom with a composting toilet, shower and washer/dryer combo, and our bedroom.

‘There’s almost 100 gallons of freshwater, two propane tanks and a solar system with 600W of panels and 600Ah batteries.

‘With everything all ready to go we finally moved onto the bus in May 2018 and have lived there full-time ever since.’ 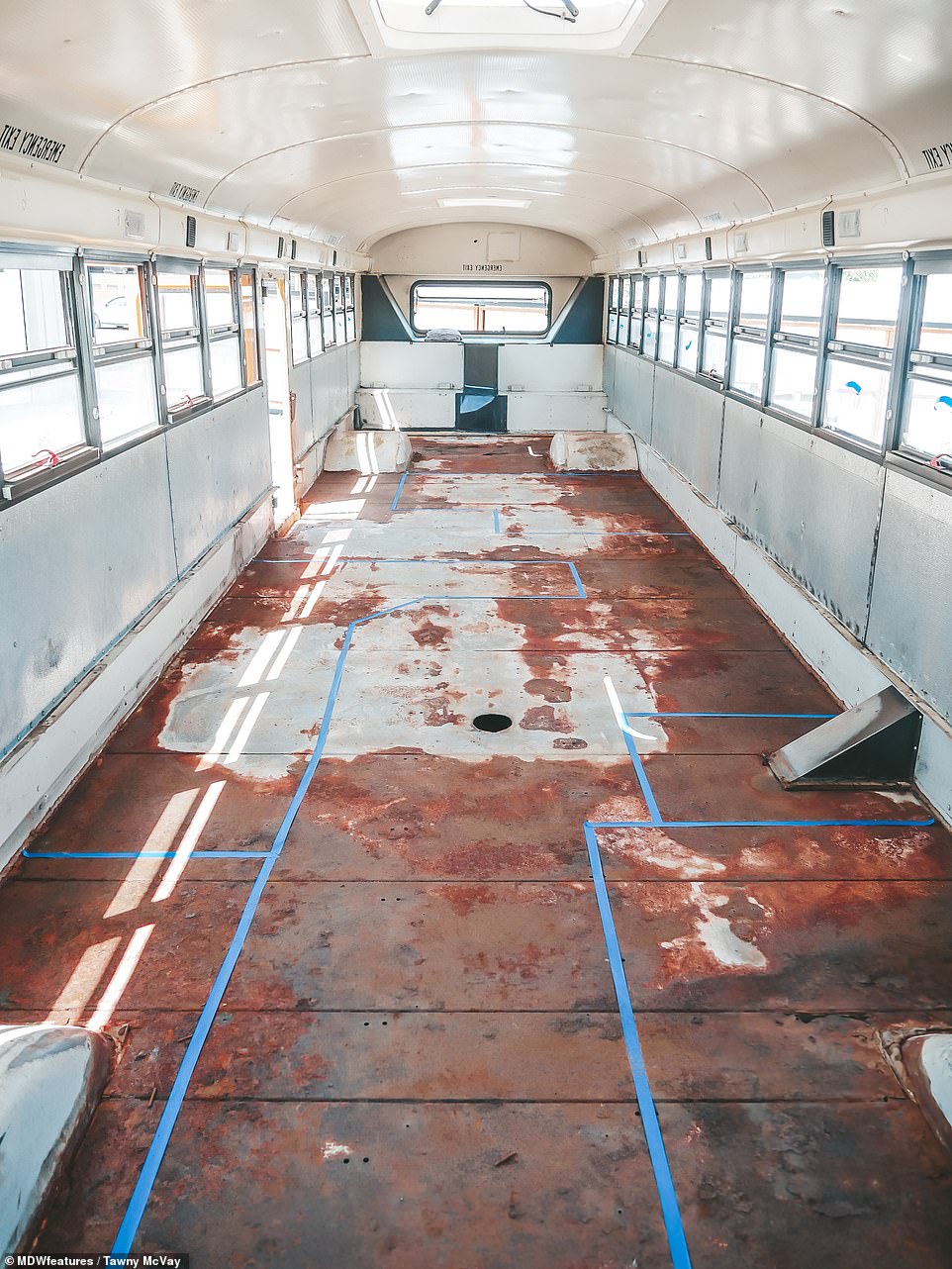 Rusty: What the school bus looked like when Tawny and Michael bought it 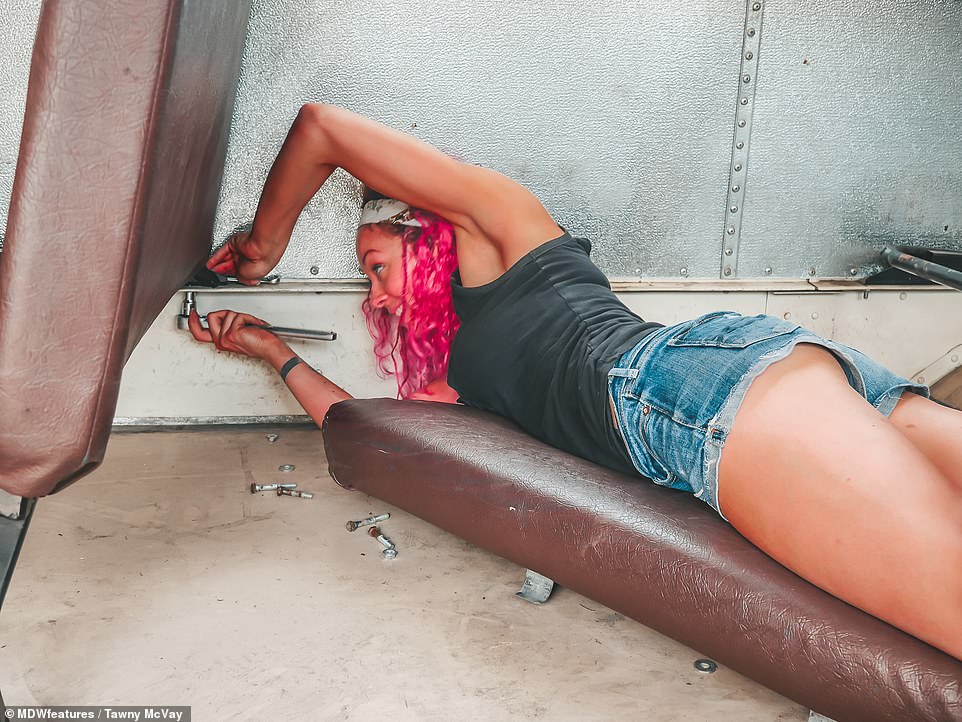 Tawny helps out with the renovations. She said: ‘When we told our family and friends what we were going to do they laughed’ 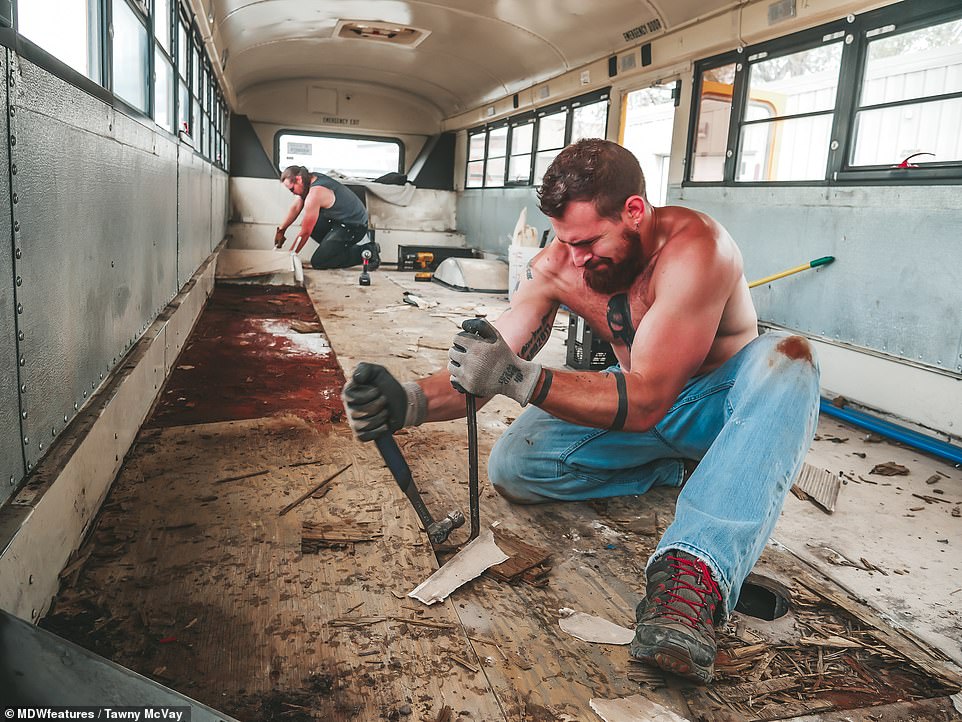 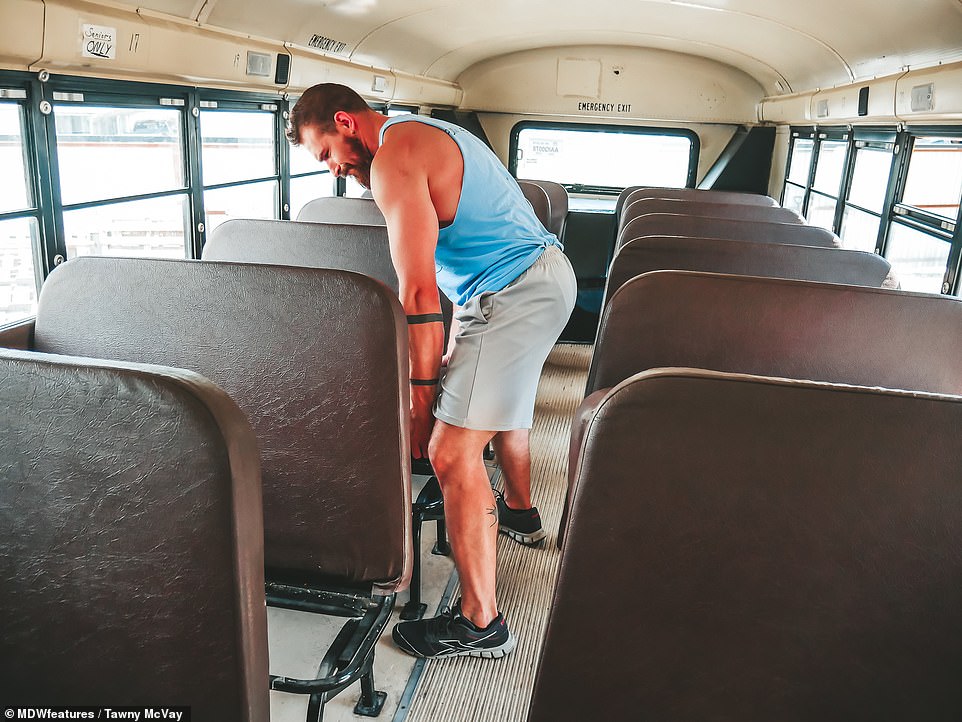 All of the seats on the bus had to be ripped out in order to add in beds, a kitchen and a bathroom

The couple has so far covered about 5,000 miles having travelled across the Pacific Northwest, Montana, Idaho and Wyoming and plan to head to southwest USA during the harsh months of winter.

Tawny added: ‘We’ve been very fortunate to not have too many problems while on the road. We have our Great Dane Apollo to protect us, but thankfully the only thing ever going bump in the night has been the occasional wild animal when we stay in the woods.

‘Sometimes it can be tricky finding somewhere to fill up on water or find a place to park the bus when we are visiting bigger cities.

‘When we told our family and friends what we were going to do they laughed. Mike and I are pretty impulsive people and also don’t stay inside the societal norm box. They nodded and went along with it. I suppose they are used to our “oddball” choices.

‘We have two kids who also travel with us part time when they’re not with their biological dad. We like that we can teach them to follow their dreams even if they aren’t “normal”. 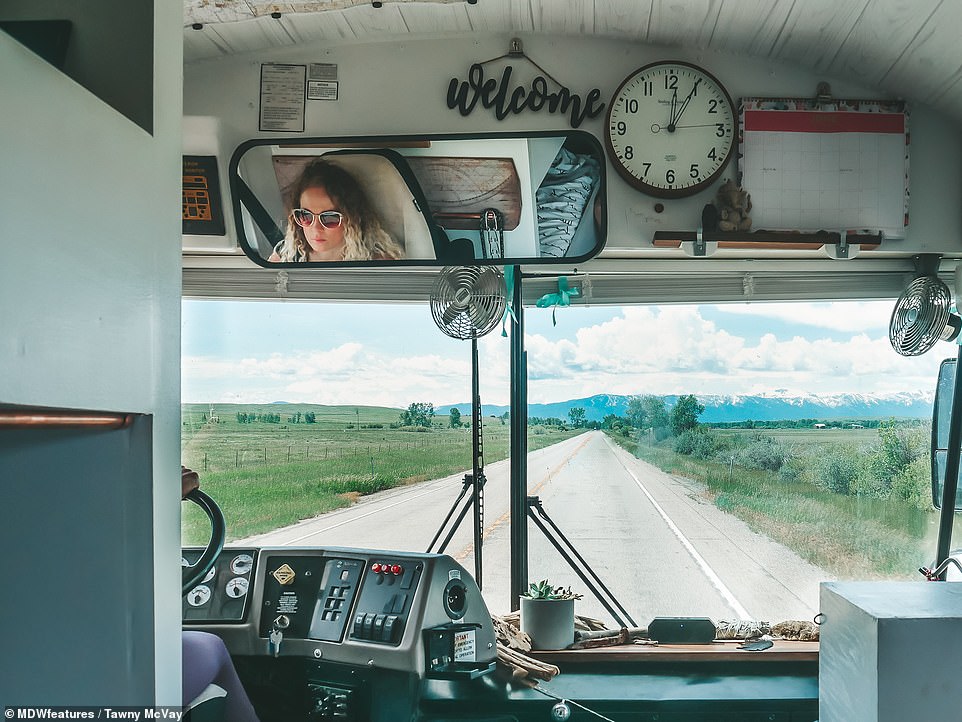 Tawny sits at the wheel of the bus. Since May 2018, the McVays have travelled over 5,000 miles on it 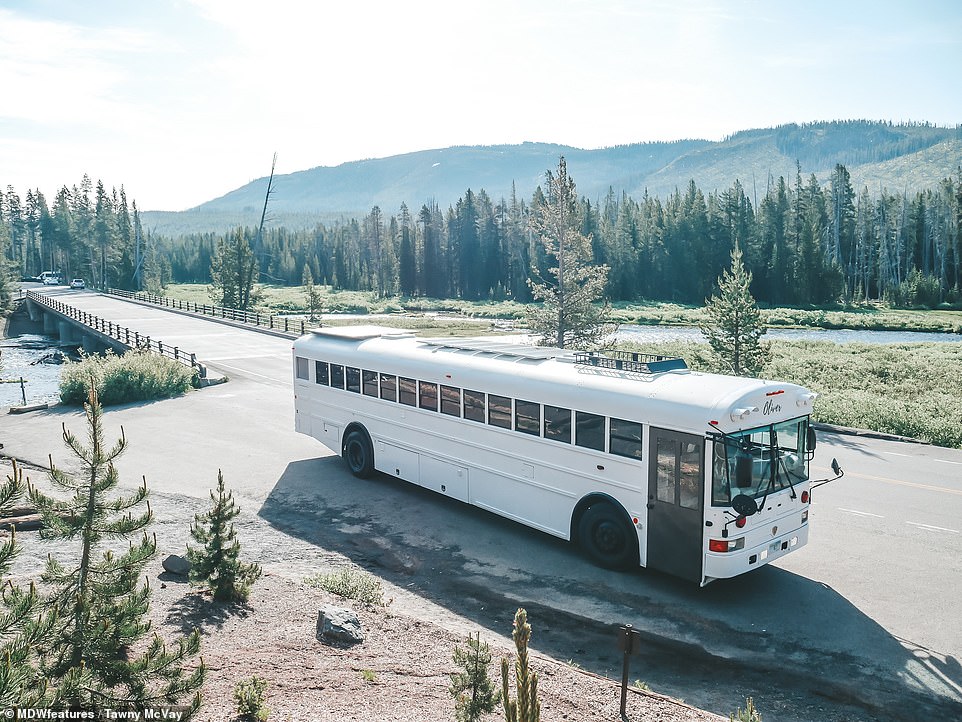 Tawny said: ‘Sometimes it can be tricky finding somewhere to fill up on water or find a place to park the bus when we are visiting bigger cities’

‘Every lifestyle comes with pros and cons. Having a home on wheels isn’t always an easy choice, it takes determination as you have breakdowns and travel issues to deal with.

‘To be honest, as the saying goes, we would rather die on an adventure like this than live standing still. If you understand that, if you feel something when we say that, bus life could be for you.

‘People who say “I wish I could do that” guess what? You can! We don’t have special skills, we had no experience before we got started, we learnt as we went on and with help from others with experience.

‘All it takes is the determination and the desire to push through no matter what.’ 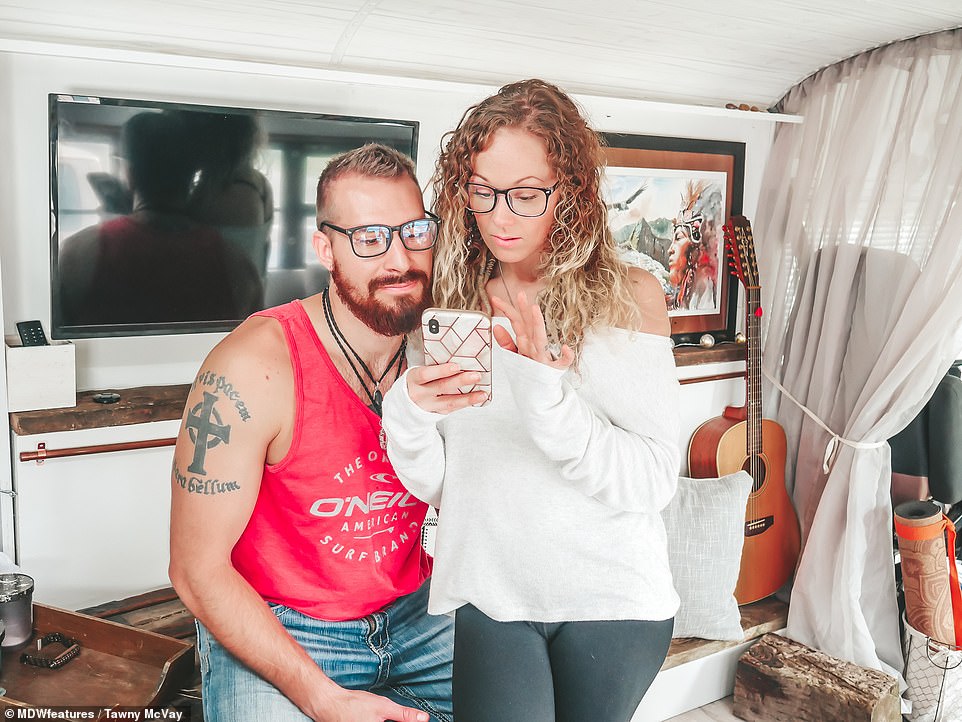