New parents both survived coronavirus were overcome by emotion as they met their twin boys 20 days after their birth.

Jennifer, 36, and Andre Laubach, from Michigan met their sons Mitchell and Maksim at the Troy Beaumont Hospital facility where they had been staying since their birth on April 3.

With Andre having tested positive to the virus right before the birth, the new parents had to stay away from their newborns for an excruciating 20 days period, as nurses took care of them and video called when they could.

Just before the birth, Andre, who has asthma, could not talk or breath properly due to his severe symptoms, and could not come to the hospital with his wife.

Jennifer told ABC’s Good Morning America that she went through a bout of postpartum depression after the birth, having tested positive for the virus herself.

Jennifer, 36, and Andre Laubach, from Michigan met their sons Mitchell and Maksim at the Troy Beaumont Hospital facility where they had been staying since their birth on April 3 (pictured: Jennifer and Andrew with their sons during their first visit to the Neonatal Intensive Care Unit)

Jennifer and Andrew let their emotions show as they finally got to visit the neonatal intensive care uni where Mitchell and Maksim awaited them.

Jennifer particularly thanked the nursing staff for their help and compassion during the ordeal.

Thanks to the help of the staff, the parents were able to see and talk to their babies on video call, even thought the image was sometimes shaky or blurry due to connection issues.

She revealed the nurse who called her to let her know she could come visit her children was crying on the phone, even though they did not know each other.

Finally, after visiting their boys in the hospital, Jennifer and Andre were able to take Mitchell home. His brother Maksim is still in the NICU, but is now able to breath on his own after weeks on a ventilator.

The parents have to take turns to visit the unit while the other stays with Mitchell at home, and the twins won’t meet the rest of their family for quite some time. 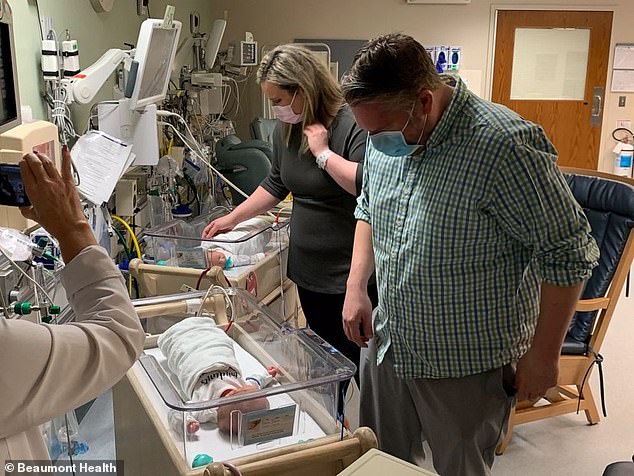 Jennifer, who thought her husband Andre was on the brink of death when she drove to the hospital to deliver their sons, said she experienced postpartum depression after her stressful birth and birthing complications (pictured with Maksim and Mitchell in the NICU)

However, this sounds like the best ending possible after the stress surrounding Jennifer’s delivery.

Jennifer, who started self-isolating in mid-March due to her pregnancy, recounted that she soon started to develop covid-19 symptoms.

Andre, an attorney, also showed symptoms of the virus, which seemed more severe than his wife’s.

The pair were tested for the virus and found that Andre had tested positive only a few minutes after Jennifer’s water broke.

The mother-of-two revealed she tested negative at the time, but it later turned out her result was a false-negative, and she indeed have the virus.

To make matters worse, Andre was overtaken by a coughing fit as the two prepared to drive to the hospital, and a health consultant said he should not come to the hospital due to his positive diagnosis.

‘As I was leaving I was thinking am I ever going to see him again,’ Laubach said. ‘He was in really bad shape.’

Worried about her husband – who was treated by paramedics at home that evening – Jennifer prepared to give birth alone in an isolated part of the hospital. 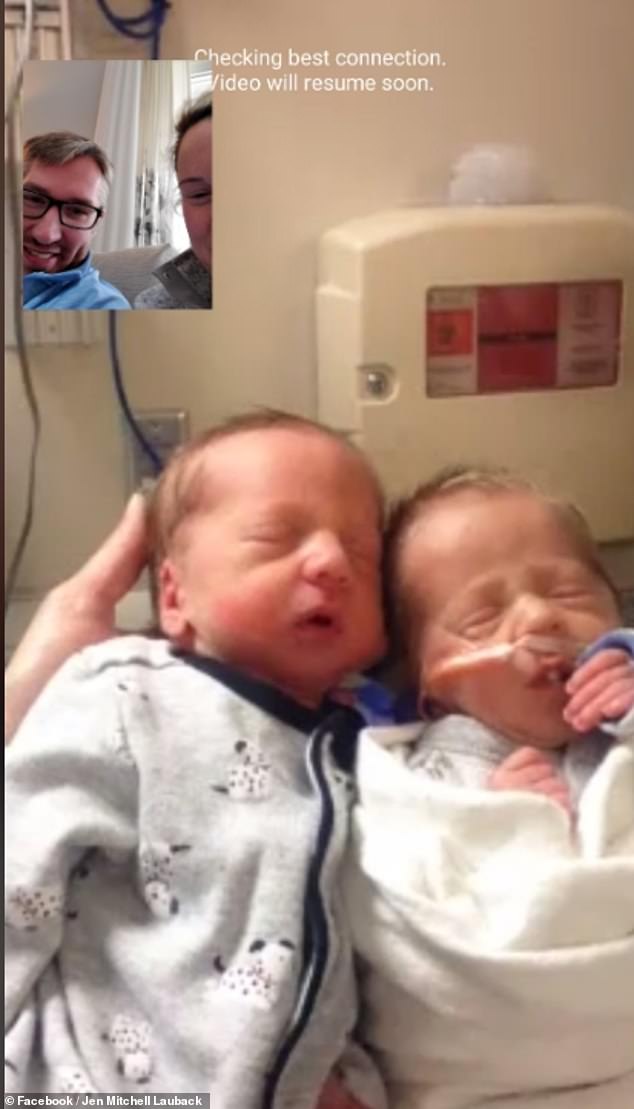 Thanks to the kindness of the nurses caring for the babies, Jennifer and Andre were able to FaceTime their sons from home (pictured)J 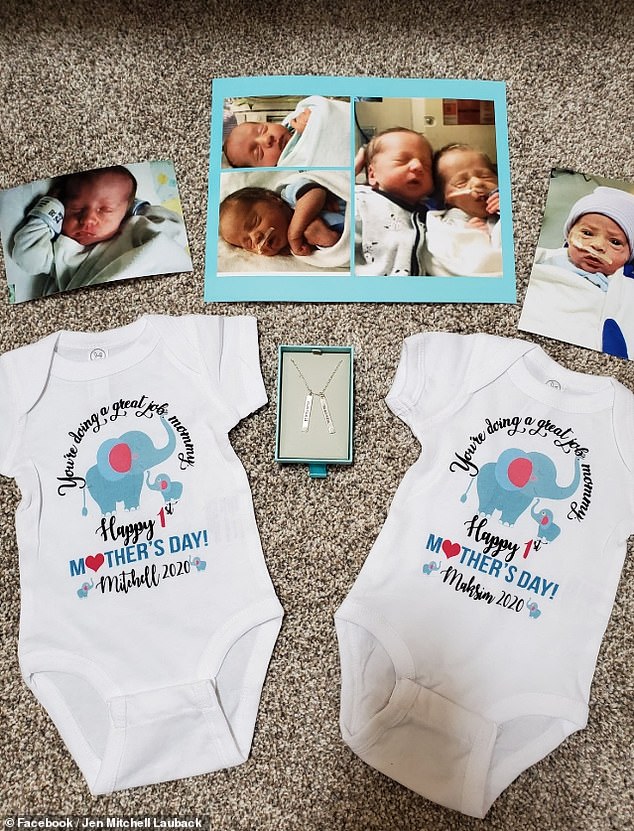 Jennifer took a picture of two Mother’s Day pjs for the twins, as well as two small necklaces and pictures taken in hospital (pictured)

‘My maternal instinct just kicked in and I didn’t want to cause undue stress on myself or the babies so I just tried to remain calm,’ she said. ‘I knew my brother was there checking on him and I knew he was taken care of if something were to happen.’

After giving birth, the mother was immediately taken away from her children to avoid contagion and was sent to recover in another room.

The difficult circumstances surrounding this stressful birth and complications after the delivery caused Jennifer to experience postpartum depression.

‘I was isolated again from my family and friends and couldn’t see my babies and I was going through some postpartum depression I’m sure,’ she said. ‘My nurse stayed with me throughout the entire first two nights I was in the hospital. I didn’t have anyone else.’