The images show Meghan Verikas, 33, and Mack McDaniel, 51,posing for detectives who were trying to snare their former partners, Leon Jacob, 39, and Valerie McDaniel, 48.

The McDaniels were divorced at the time and Verikas had ended her relationship with Jacob but Valerie still owed her ex-husband $1.25million from the settling of their estates and Jacob was the subject of a protection order stopping him from contacting his ex, who he had been stalking.

Prosecutors say he wanted her dead so that she could not testify against him in the stalking case.

They pair are accused of offering a hitman $20,000 and two Cartier watches to do the job. They were unaware that the hitman was in fact an undercover police officer.

Once they had made the offer, police contacted Meghan and Mack and asked them to go along with it to ensure their partners’ would be caught, which they did.

After their arrests last year, Valerie committed suicide while out on bail and awaiting her next court date.

In these staged photographs that were set up by police, Meghan Verikas poses as if she has been kidnapped. The image was sent to her ex-boyfriend Leon Jacob who, it is alleged, hired a hitman to have her killed 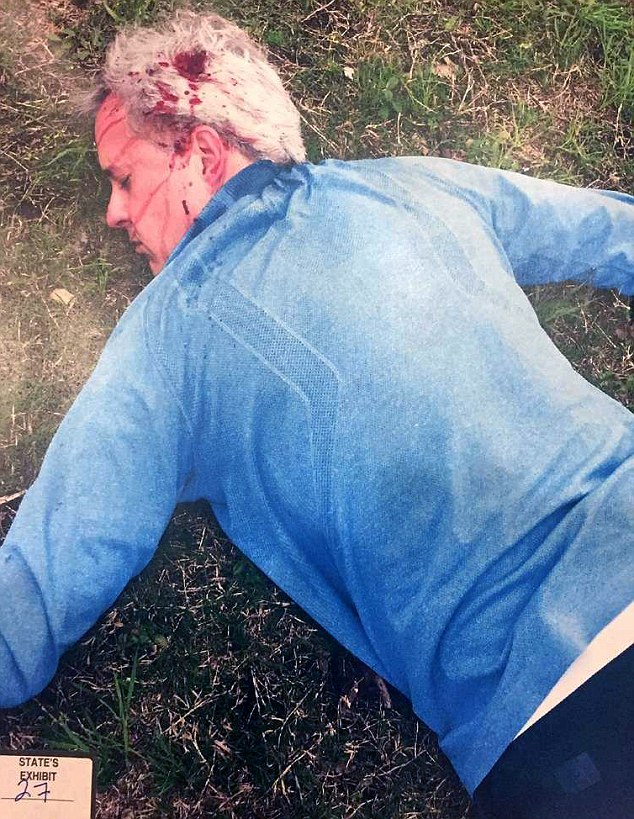 Mack McDaniel, the ex-husband of Houston veterinarian Valerie McDaniel, posed for a similar photograph. He pretended he was dead and had been shot in the head in a car jacking. Police used fake blood and had him close his eyes

Leon is now on trial in Houston, Texas. On Wednesday, his ex-girlfriend testified about the photographs she posed for.

‘I sat in a chair in a warehouse and they zip-tied my hands and my feet and put duct tape around my mouth to make me look as though I had been kidnapped.

‘I had sat in that parking lot for an extended period of time so I was crying and really upset,’ she said, according to Click 2 Houston which attended the trial.

Mack also testified and described the whole ordeal as ‘beyond imaginable’. Police made him look as though he had been shot in the head in a carjacking.

He became emotional on the stand as he spoke of his daughter who was just eight at the time of the plot. 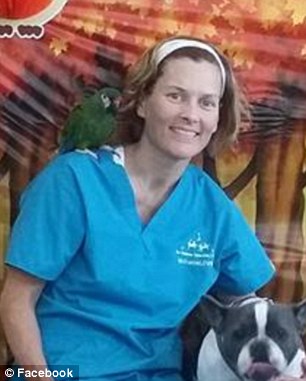 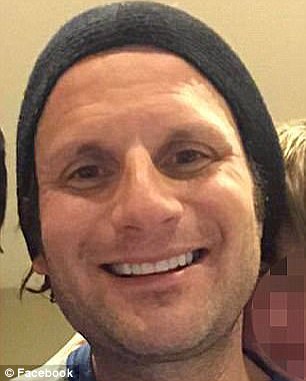 Valerie McDaniel and Leon Jacob allegedly hatched the plot to kill their exes together. The pair were dating at the time. Valerie still owed her ex-husband $1.25million from their divorce and Jacob was the subject of a protective order telling him not to contact her 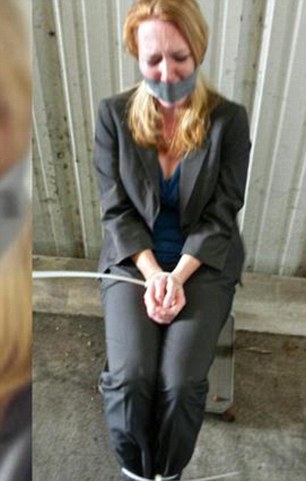 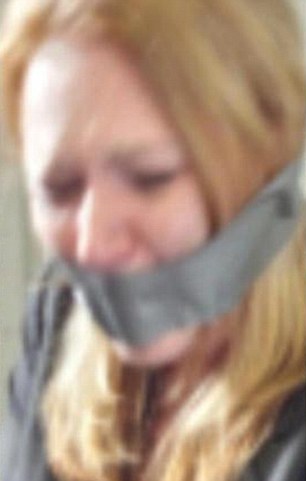 Verikas said she was told to act as though she was upset and in fear of her life. The photographs were sent to Jacob who, police said, made no attempt to have her saved 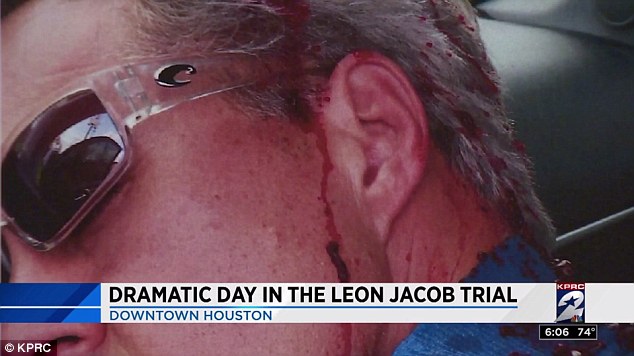 In another image that was shown to the court, McDaniel appears still in the car with sunglasses on 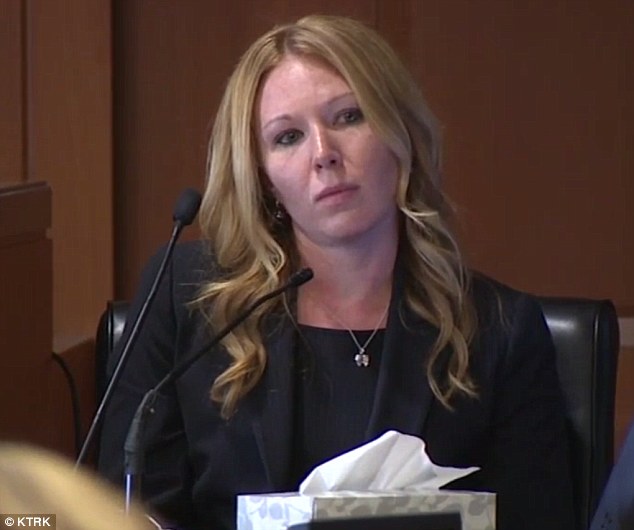 Verikas, 33, testified on Wednesday at her ex-boyfriend’s trial in Houston, Texas 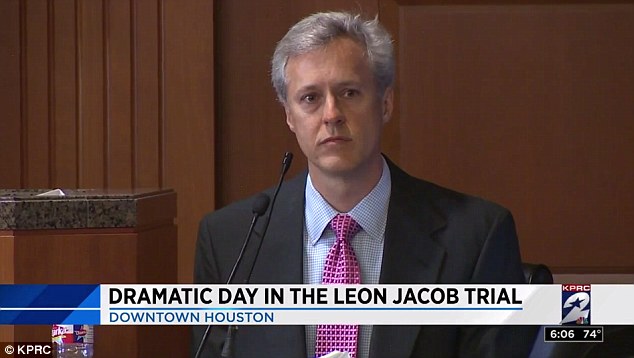 Mack McDaniel also testified on Wednesday about how he was asked to pose for police and agreed. He called it ‘beyond imaginable’

‘If they would have been successful, Natalie would have not had any parents,’ he said.

On Tuesday, a bail bondsman testified about how Jacob tried to have his girlfriend killed after he’d been arrested for stalking her to ensure she could not testify against him.

That man said Jacob told him to kill her with potassium chloride ‘to the heart’.

‘He’s always been on the track of actually killing Meghan if it doesn’t go his way. Yes, he did actually propose the way to kill her.

‘Potassium chloride to the heart. It was untraceable, those were his words,’ he said.

Jacob denies the charges and insists he wanted to spend the rest of his life with Meghan. 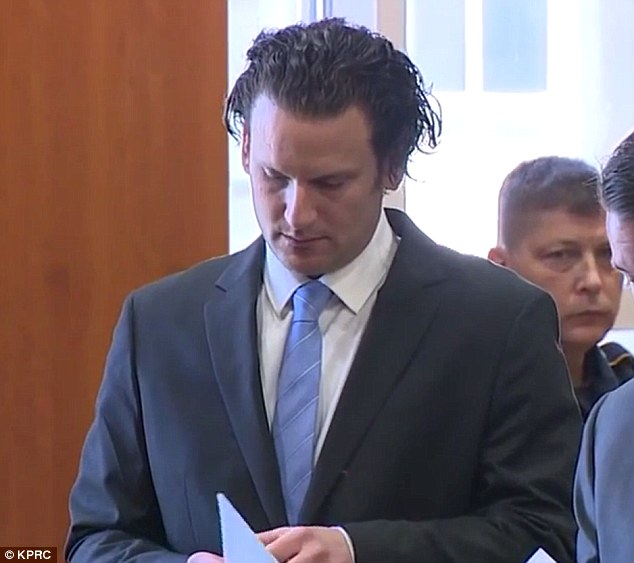 He claims they had broken up not long before the plot and that he was trying to win her back.

On Tuesday, during opening arguments, one of his attorneys told the court: ‘He wanted to get back with Meghan, but his pleas of love went unanswered. She ignored him.

‘She refused to take him back.’

Valerie’s husband feared that she would take her own life once she was released on A $50,000 bail in March last year. 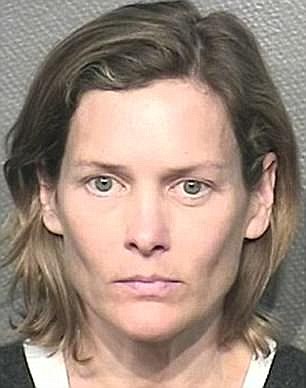 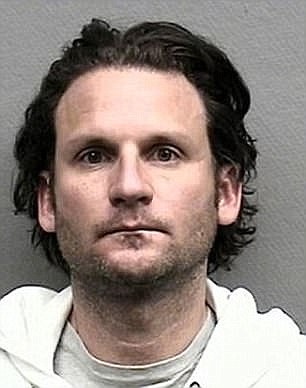 In March last year, McDaniel and Jacob were arrested. She was granted bail, he was not. She killed herself three weeks later, a day before she was due to appear in court 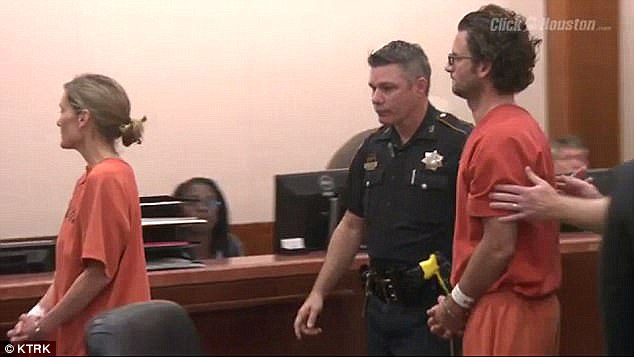 ‘She has nothing to lose,’ he said at the time.

On March 27, Valerie leaped to her death from her seventh floor condo a day before she was due for her first appearance in court.  She had left two suicide notes.

Unlike McDaniel, a successful veterinarian with a blemishless record, he has a criminal history and background rife with debt and chaos.

They met when his mother filed the paperwork for McDaniel’s divorce from Mack.

She cited his infidelity as the reason for it and asked for full custody of their daughter. 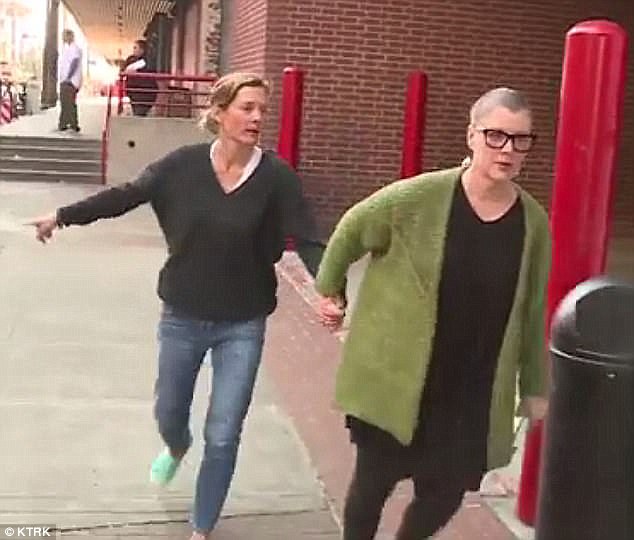 McDaniel is pictured being led out of county jail last year by a friend. Her husband pleaded for her not to be granted bail at the time, saying she had ‘nothing to lose’. She committed suicide three weeks later