The mother of two young boys killed in a hit-and-run has spoken of her heartbreak as the serial criminal who killed them is jailed for nine years.

Louise Platt-May and the boy’s father Reece Platt-May are now asking the government to ‘honour the boy’s lives’ with tougher sentences on reckless drivers who kill.

At Warwick Crown Court on Friday 53-year-old Brown, described by a judge as ‘selfish’, was jailed for causing the death of Corey, 2 and Casper Platt-May, 6.

The killer had 57 previous convictions for 209 separate offences and had been released from prison only six days beforehand. He had never held a driving licence.

In a victim statement read out the court, their mother, said her family has been ‘broken’ and that ‘time would never heal this’.

The two boys were with her in MacDonald Road, Coventry, at around 2pm when a Ford Focus, driven by Brown, ploughed into them at more than 60mph in a 30mph zone.

Witnesses said Brown had been ‘driving like a madman’ with his car rocking on its wheels.

Brown tried to leave the scene with his passenger Gwendoline Harrison, 42, but not before members of the public put him in a headlock, delaying him long enough for police to track the pair to their hiding place in a nearby back garden.

His passenger, Harrison, was also jailed for six months for assaulting a witness who tried to stop Brown as the pair tried to flee the scene. 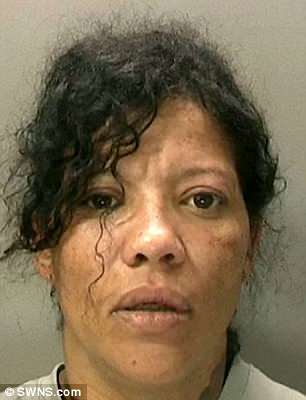 Robert Brown, 53, was jailed for nine years after he ploughed into two boys in Coventry. His passenger, Gwendoline Harrison, 42, was jailed for six months for assaulting a witness who tried to stop Brown as the pair tried to flee the scene 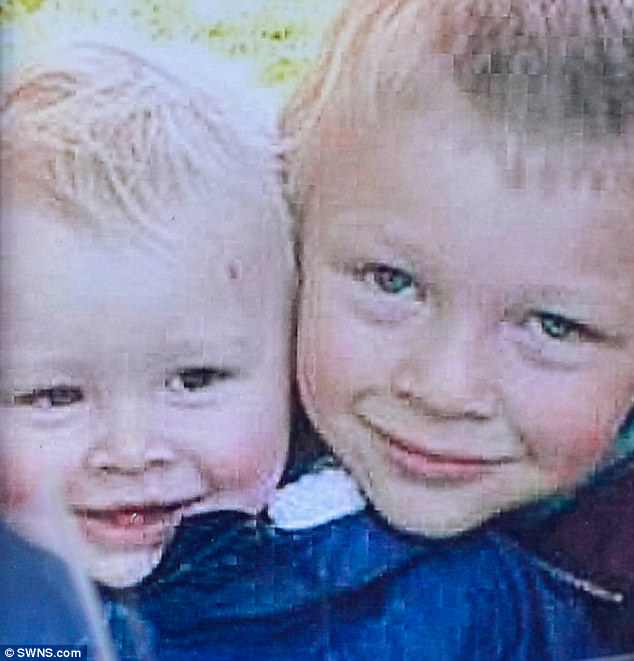 Robert Brown admitted causing the deaths of Corey and Casper Platt-May, aged six and two, by dangerous driving and was jailed for nine years

Speaking after sentencing, the family’s lawyer Rebecca Hearsey, read a statement from the boys’ 28-year-old mother in which she spoke of her family.

‘Endless opportunities, experiences, relationships, robbed from them. I cannot process the scale of their loss or digest the impact their being taken so cruelly has had on myself, my husband and their brothers.

‘My family is broken, my heart is broken and time will never heal this.’

She also paid tribute to her sons after the collision, describing them as ‘amazing’ and ‘cheeky’ boys who will ‘be deeply missed’.

She added: ‘To watch your children die in front of you is something no parent should have to experience.

‘Our family should have had so many years ahead of us to create a lifetime of memories but these have all been snatched away because of Robert Brown. 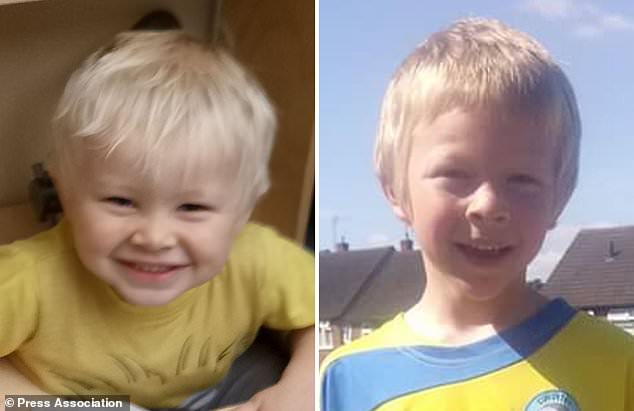 ‘We don’t blame the judge for the sentence he imposed, but what today has highlighted is that those who rip families apart seem to be the ones who get off more lightly.

‘Robert Brown showed a total disregard for the law when he got behind the wheel that day.

‘Because of him, we are living a life sentence knowing we will never see our boys grow up, while he will be out of prison in just a few years and will be free to continue his life.

‘We will never come to terms with how Corey and Casper were taken far too soon. 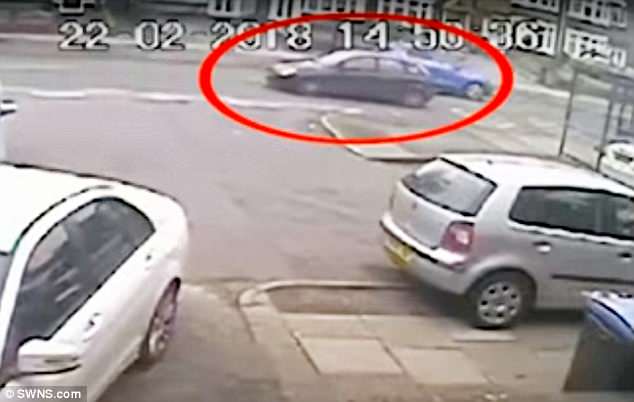 ‘Our only hope now is that some good comes out of their deaths through the introduction of tougher punishments for drivers who think they are above the law.

‘We call on the government to honour Corey and Casper’s legacy by ensuring its proposals are made law as soon as practically possible.’

The grandmother of the two boys, Carolyn Platt, slammed the sentencing on Facebook.

Brown was jailed for six months in November last year for possessing the red-handled machete on September 12 and had been let out on licence just six days before the collision.

Sentencing, Judge Lockhart said Brown had led a ‘life of crime and incarceration’ and told him his ‘selfless and reckless driving had torn a family apart’. 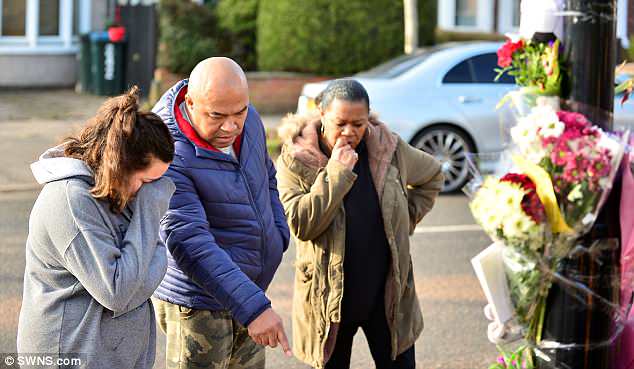 Tests later revealed Brown to have exceeded the legal threshold for commencing prosecutions for driving with the presence of cocaine in his system, by more than nine times.

Police have described Brown’s actions as ‘callous’ and said the ‘awesome’ reaction of the public helped them detain the duo who tried to escape the scene.

Police also said the guilty pleas were a result of the overwhelming evidence against the pair – who previously did all they could to evade justice.

Detective Sergeant Paul Hughes of the West Midlands Police Collision Investigation Unit said: ‘It was 2pm in the afternoon and there was a young family making their way to the park.

‘It was a 30mph speed limit and their intention was to cross the road like everyone else does and unfortunately, as they’re crossing the road, our driver has chosen to drive at speeds… not less than 61mph in that 30mph zone.’

Describing the incident, DS Hughes said: ‘He has, I can only use the word, ploughed through the group, did not stop at the immediate scene… and then chose to run away, leaving Corey and Casper lying in the road.’

Speaking of how members of the public stopped Brown and Harrison from escaping, DS Hughes said: ‘It was an awesome reaction. 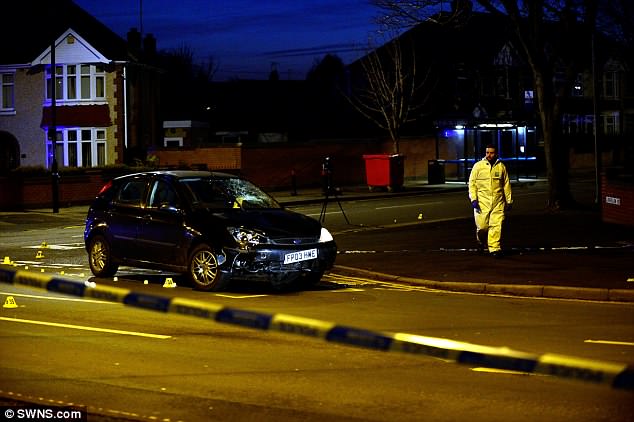 The victims’ mother, Louise Platt-May, paid tribute to her sons after the collision, describing them as ‘amazing’ and ‘cheeky’ boys who will ‘be deeply missed’

‘It’s thanks to those members of the public that we have had such a quick investigation.

‘You can imagine the shock from what they have just witnessed… but they didn’t just stop and stare – they helped with Corey and Casper and went after, tracked and helped us detain the two persons at the car.’

DS Brown added: ‘I genuinely don’t know [what Brown was thinking]. The only person that knows is him.

‘We know that as a minimum the speed the vehicle was driving was 60mph in a 30mph zone, which is even horrific to say let alone to witness.’

Brown, of Attwood Crescent and Harrison, of Triumph Close, both in Wyken, Coventry, was sentenced at Warwick Crown Court today.

In October last year, the Ministry of Justice signalled plans to introduce an increase to the maximum sentence for causing death by dangerous driving to life imprisonment in the most serious cases.

Ms Hearsey, a specialist lawyer with Irwin Mitchell, said: ‘Judges are hamstrung by current sentencing tariffs and many people will be shocked by the apparent lenient sentence that Robert Brown has received.

‘While it is sadly too late for Corey and Casper’s family and many other families that have been ripped apart because of drivers who kill or seriously injure loved ones, we hope these tragic deaths highlight the need for judges to be allowed to impose more stringent sentences in such cases if they deem appropriate.’

She added: ‘We welcome the Ministry of Justice’s (MoJ) proposals to introduce tougher sentences and would ask that these proposals are turned into law at the earliest possible opportunity.’

An MoJ spokesman said: ‘This was a truly awful crime and our sincere condolences remain with Mr and Mrs Platt-May and their family and friends.

‘Serious further offences like this are very rare – but each one is taken extremely seriously and investigated fully, so we identify any necessary actions when managing other cases.’