Coronavirus antibody tests should not be used to tell people whether they have had the infection already, scientists have warned.

In a joint letter published in the British Medical Journal, a dozen leading scientists have cautioned that the blood-based kits — once dubbed ‘game-changers’ — by top politicians may actually be more trouble than they’re worth.

Antibody tests examine blood to look for signs of past infection, as opposed to swab tests that tell if someone is currently infected.

An antibody is a substance produced by the immune system to remember how to fight off a particular illness — a Covid-19 antibody shows someone has had Covid-19.

But the presence of them doesn’t guarantee someone won’t get the illness again, the experts warned, because there is no firm proof that long-term immunity exists.

And, despite the Government having bought more than 10million of the tests, the way they have been tested is not good enough to prove their quality, the letter added.

Rolling out the tests in the NHS to patients would use up so much time and money, to produce uncertain or potentially worthless results, that it isn’t worthwhile, it said.

Antibody testing is currently only available to frontline NHS staff, who are given tests made by the pharmaceutical companies Roche and Abbott.

Antibody tests work by feeding someone’s blood through a device containing a fragment of the coronavirus and an enzyme to encourage them to react if all are present (Pictured: A test being used in Russia)

The scientists’ warning in the BMJ was triggered by an NHS letter in May that asked hospitals to prepare to roll out antibody testing en masse to their staff and patients.

This asked NHS England to test all staff who want one, as well as patients for whom it would be useful or desired to know if they had had the infection.

WHO SIGNED THE LETTER?

Antibody tests work by feeding someone’s blood through a device containing a fragment of the coronavirus and an enzyme to encourage them to react if all three parts are present.

If there is a reaction when the blood is inserted, it indicates that someone’s immune system has antibodies and has learned how to fight off Covid-19 in the past.

But the researchers writing in the BMJ, who work at universities including Liverpool, Oxford, Nottingham, and Queen Mary and UCL in London, said this did not mean anything more than that someone had had the virus already.

With other disease, a positive antibody test may prove that someone is immune to an illness. But because the coronavirus has only been around for six months, scientists do not know whether people’s bodies protect themselves from it over the long-term.

Studies have suggested that antibodies last for months, at least, but it remains unclear how protective they are.

The scientists wrote: ‘The concept of ‘immune passports,’ allowing healthcare workers or others to work, has not been established.

‘Those with a positive antibody test should still consider themselves at risk and follow infection control policies designed to prevent [in-hospital] spread and risk of infection.

‘There is, therefore, no benefit to healthcare organisations or to others in knowing the status of employees at present.’

Another concern of the scientists was that the antibody tests being used in the UK have not been evaluated well enough to prove that they are good.

They raised concerns that tests were not being done on enough people known to have the coronavirus, to check their accuracy. 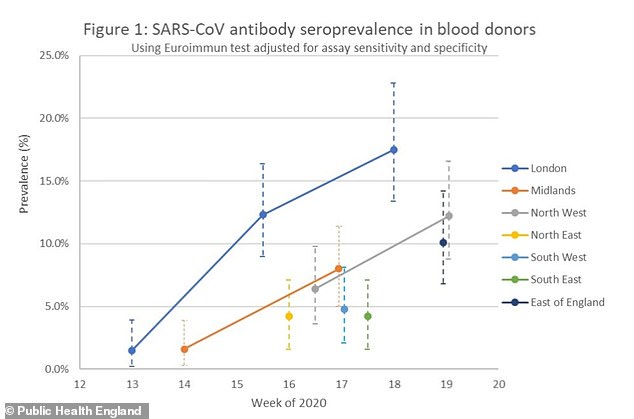 Public Health England antibody testing results show the levels of exposure to Covid-19 vary wildly across the UK, from around 17.5 per cent in London to lower than five per cent of people in the South East and North East

WHAT IS AN ANTIBODY TEST AND WHAT IS IT USED FOR?

Antibody tests are ones which look for signs of past infection in someone’s blood.

Antibodies are substances produced by the immune system which store memories of how to fight off a specific virus. They can only be created if the body is exposed to the virus by getting infected for real, or through a vaccine or other type of specialist immune therapy.

Knowing you are immune to a virus – although whether people actually develop immunity to Covid-19 is still unknown – can affect how you act in the future. Someone may need to protect themselves less if they know they have been infected, for example, or medical staff may be able to return to work in the knowledge they are not at risk.

Experts believe that around 60 per cent exposure would be required for herd immunity from Covid-19, but the UK does not appear to be anywhere close to that.

Early estimates suggest 17 per cent of Londoners have had the virus, along with five per cent of the rest of the country – about 4.83million people.

This means the virus might spread slightly slower in future but the risk of second outbreak and hundreds or thousands more deaths remains very real.

And they were also not being tested on enough people with other illnesses, to check whether the tests cross-reacted and returned a positive result for a different type of infection.

The letter said: ‘Those who are at highest risk of death from this infection are elderly people, those from black and minority ethnic groups, and immunocompromised people.

‘There are currently no data showing the performance of the tests in these groups.

‘The [test] is being rolled out at an unprecedented pace and scale without adequate assessment, potentially compromising public trust in pathology services in the future.’

Because of concerns about the quality of the tests, and uncertainty about what the results even show, the scientists said the NHS’s plan to roll out antibody tests was a waste of time and money.

The service would require results to be produced within 24 hours, they said, which would cost laboratories time and money.

They added: ‘Given that routine testing of patients is neither clinically urgent nor meets a clear public health need, this push to introduce a non-evidence based test for uncertain gains risks inefficient use of scarce resources.’

In conclusion the researchers admitted that antibody tests were useful for research, to track how far the virus has spread, but not for much more.

Both the Office for National Statistics and Public Health England are using antibody tests for this purpose, and have tested tens of thousands of people to date.

This blood testing on behalf of the government has found that around 5.4 per cent of people in England have had the virus already. The ballpark is somewhere between 4.3 and 6.5 per cent, according to the Office for National Statistics.

This means around 3million people have had the virus already, and considerably more people in London have had it than in other regions.

CDC WARNS EVEN GOOD TESTS MAY BE WRONG 50% OF THE TIME – SO HOW DO THE TESTS FALL DOWN?

The US’s Centers for Disease Control & Prevention last month warned that coronavirus antibody tests may be wrong 50 per cent of the time even if they are high quality.

It warned that the antibody testing is not accurate enough for it to be used for any policy-making decisions, as even with 95 per cent test specificity (the accuracy of negative results), ‘less than half of those testing positive will truly have antibodies’.

Antibody tests with what could be considered a high level of accuracy can still produce large margins of error if only a small proportion of a population has been infected.

A 95 per cent specific test, for example, will always produce five false positive results from a group of 100 people.

Even if it is sensitive enough to detect all the people who have genuinely had the disease, it will still return five false positives, and the effect this has on the results of a survey can be large if the number of true positives is low.

If the prevalence of antibodies is low – for example, only five per cent of people in the group have had the illness – the results could end up half wrong. The 95 per cent test, in that situation, would be expected to return 10 positives – five of them right, five of them wrong.

This means the functional accuracy of the test, known as its true predictive value, is only around 50 per cent.

For example, if 30 per cent of the population have been infected, those five false positive results would be counter-balanced by 30 true positives, making the test more like 85 per cent accurate.

A more specific test can reduce this effect; by comparison a 99.9 per cent specific test would return one wrong result per thousand – 100 per million. 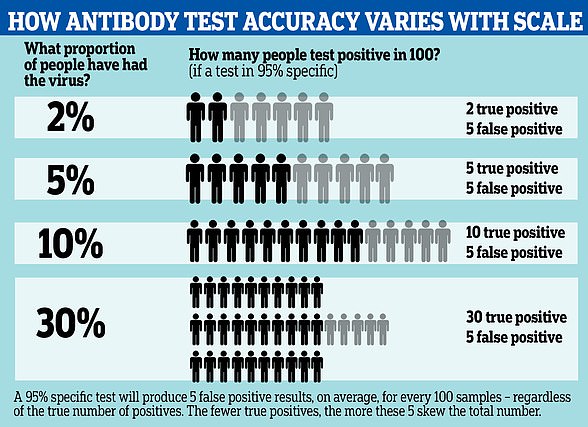 NHS to trial coronavirus tests that give results in minutes

Coronavirus tests which could give results in minutes rather than days will be tried out in the NHS as part of a research programme.

Researchers from Manchester University NHS Foundation Trust and the University of Manchester will assess the effectiveness of tests, which could be quicker, more convenient and more accurate, as part of a £1.3million national programme.

Tests being used to detect Covid-19 at the moment can take 72 hours to give results.

A research team will work with the Government and scientific advisers to identify which new tests could be most valuable in the NHS and then evaluate them in health and care settings including emergency departments, critical care and care homes.

The research will take place across Greater Manchester, including at the Manchester Royal Infirmary and Salford Royal hospitals.

Between 10 and 20 new Covid-19 tests will be conducted at about 30 hospitals where patients are recruited for the study, which is expected to start by the end of the month.

Lord Bethell, minister for innovation at the Department of Health and Social Care, said: ‘We need the fastest, most accurate tests in the NHS to help keep Covid-19 under control.