Locked-down workers at a Northern Territory mine have threatened to riot if strict ‘solitary confinement style’ conditions don’t improve.

Nearly 800 miners at Granites gold mine, north-west of Alice Springs, were plunged into isolation over the weekend after they were exposed to Covid-19.

The infected worker tested positive to the Delta strain of the virus on Friday, but not before another 900 fly-in-fly-out workers travelled home to cities across Australia.

Frustrated workers quarantining in the Tanami gold mine have taken to social media to slam the strict lockdown conditions, which has seen some waiting 18 hours for food and surviving on a litre of water for two days.

Nearly 800 miners at Granites gold mine (pictured), north-west of Alice Springs, were plunged into isolation over the weekend after they were exposed to Covid-19 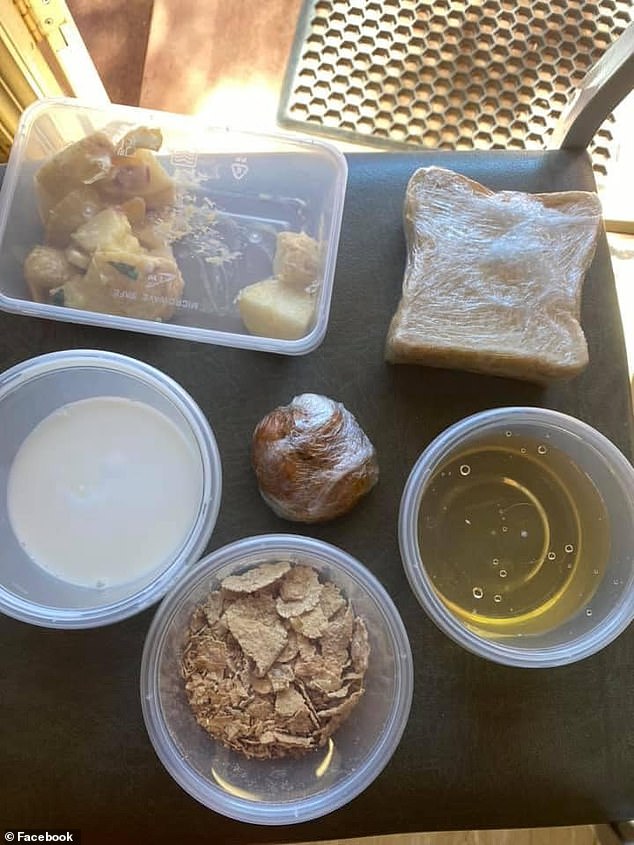 One pent-up worker shared a photo of his skimpy breakfast of dry cereal and a simple sandwich on Facebook.

‘Fourth day of quarantine and this is what we get for breakfast… at 12pm’, he wrote.

‘No milk for the cereal, still no kettle for a half decent coffee. Just enough to make a Vegemite sandwich.

‘Pretty sure I lived better than this on the dole. Yet this is meant to be a multi-billion dollar company.’

Shocked social media users shared their thoughts in the comments, one woman stating the workers ‘may as well be in jail’.

‘This is disgraceful! Feeling for all the crew in there’, one user wrote.

‘Criminals get fed better’, another commented. 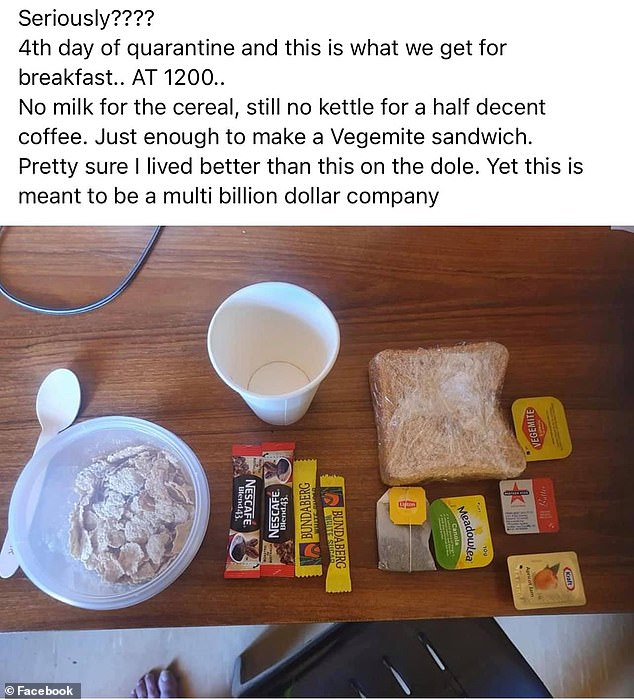 One pent-up worker shared a photo of his skimpy breakfast of dry cereal and a simple sandwich on Facebook, saying he ‘lived better than this on the dole’ 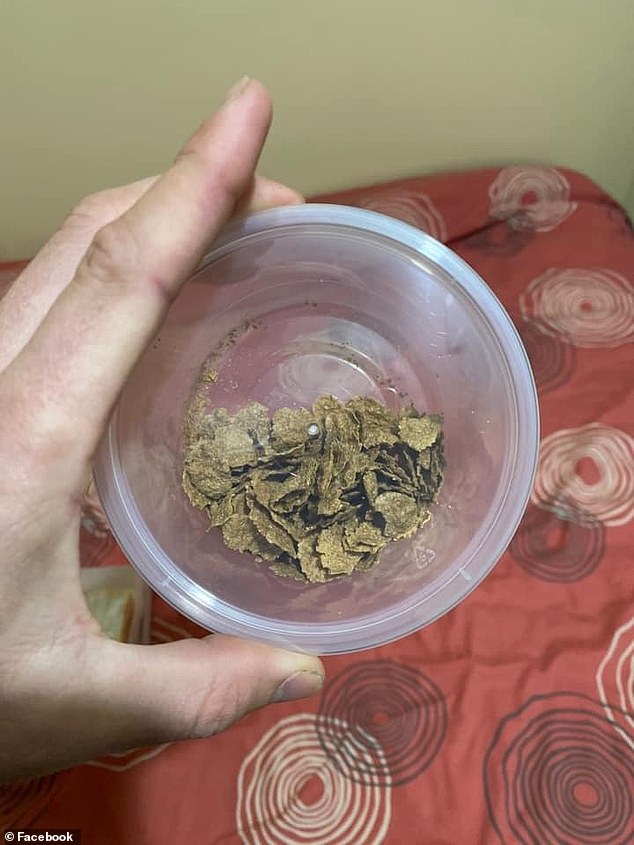 The distressed partner of one locked-down miner also took to Facebook to vent over what she described as a ‘solitary confinement style lockdown’.

‘For four days they have not been allowed to leave their rooms. No fresh air, no exercise, no conversation with anyone, no smoking, no natural light’, she wrote.

‘The workers are receiving food rations that would be lucky to have the nutritional value and calories required for a toddler (no exaggeration)’.

She said the miners had space for a single bed and a TV the size of a laptop, but had hardly any internet or access to Facebook or streaming sites like Netflix.

The woman added that the food rations and the times of day that they were delivered are ‘utterly absurd and unpredictable’.

‘The mental health, the nutrition and the physical well-being of these workers is already deteriorating rapidly. 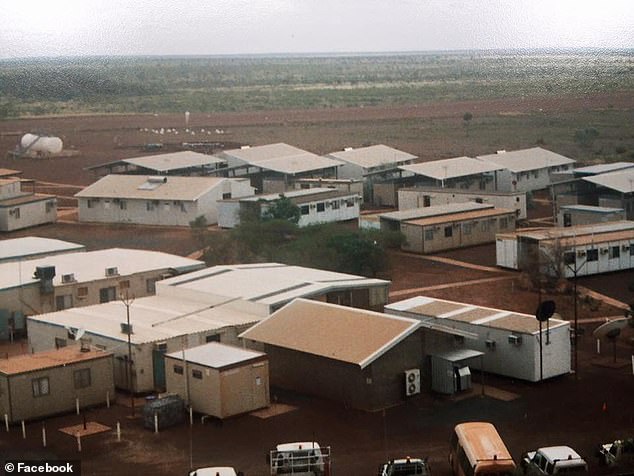 About 900 FIFO workers who were at the site (above) at the same time as the infected man have since travelled to a number of airports, sparking a contact tracing nightmare 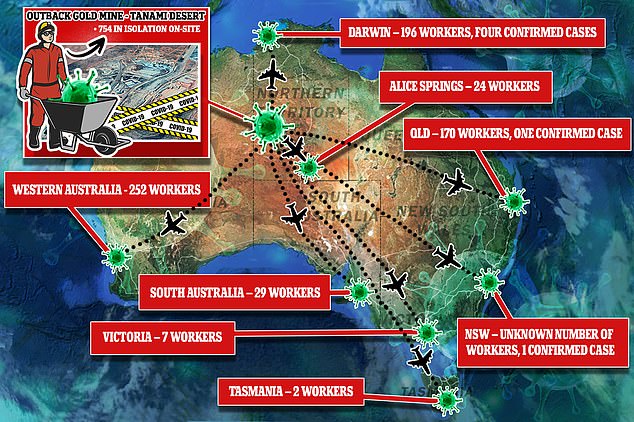 ‘No one is arguing about the fact that they need to isolate – but an increase of conditions, clear, transparent communication and satisfactory food and water is all we are asking for.’

Other locked-down workers complained of being hungry and thirsty, with one miner claiming they hadn’t received a ‘food drop’ in over 18.5 hours.

Another man said he and his colleagues hadn’t been allowed out of their rooms or to buy provisions from the camp shop just 100 metres away.

‘I’m sure we would get more rights locked up in jail’, he said.

Gold mining company Newmont who runs the mine released a statement on Tuesday explaining workers were isolating in individual rooms, except those completing essential work such as catering and support services. 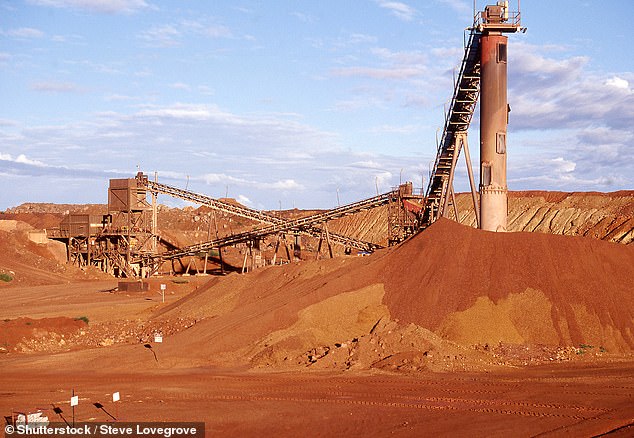 Other locked-down workers complained of being hungry and thirsty, with one miner from the Tanami site (pictured) claiming they hadn’t received a ‘food drop’ in over 18.5 hours

‘At the direction of the Northern Territory Department of Health, some individuals including positive cases and close contacts have been transferred from site to the Howard Springs quarantine facility in Darwin,’ the statement read.

A rapid response team from the Northern Territory Department of Health has been deployed to the site, with Newmont to implement directions from the department.

Darwin went into a snap 48-hour lockdown on Sunday after 196 of the workers presented for testing, which resulted in four confirmed cases.

Another 24 went to Alice Springs and tested negative, and there are an additional 70 contacts at the Howard Springs hotel quarantine facility.

Western Australian health authorities scrambled to isolate and start testing 252 contacts who flew into the state over the weekend.

Areas of Southeast Queensland have entered lockdown after 170 workers arrived in Brisbane and a female miner from the Bli Bli area of the Sunshine Coast tested positive to the Delta strain after spending time out in the community.

The state is also grappling with a further three infections from a different cluster, bringing the total up to 41.

It is not known how many miners entered NSW, but one person linked to the outbreak in the NT tested positive in Australia’s most populated state – bringing the total number of infections to 130. 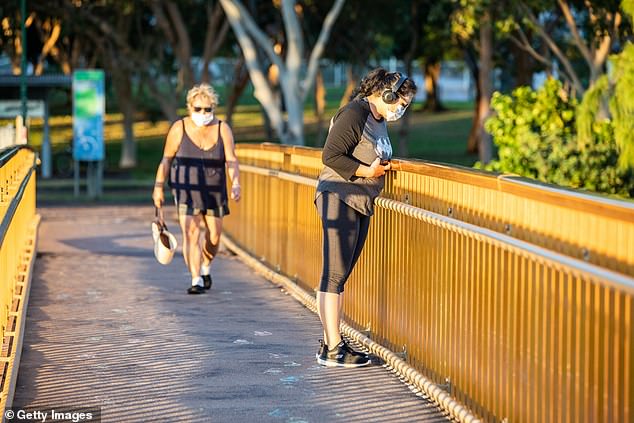 Pictured: Masked pedestrians exercising in Darwin on Tuesday as lockdown restrictions are extended by 72 hours for Darwin, Palmerston and Litchfield until 1pm on Friday July 2

The gold miner is believed to have been unknowingly infectious from June 18 until he tested positive.

The mining outbreak brings the total number of locally-acquired infections in the Territory to six.

NT Chief Minister Michael Gunner announced at a press conference that the lockdown, which will cover Darwin, Palmerston, and Litchfield, would start at 1pm on Sunday and run through to 1pm on Tuesday.

‘We are assuming the worst,’ Mr Gunner said.

‘We are expecting more cases. There is a stronger chance that any new cases will have exposure sites which makes the job of tracing and testing much bigger.’