An elderly woman living alone in Sydney who was ‘going without food’ during the city’s gruelling lockdown was forced to write to a friend begging for $20 to buy groceries.

A member of the Facebook community group for Cremorne and Neutral Bay, north of the CBD, said she knew of a woman who had barely eaten or left her house since the shutdown started nine weeks ago on June 26.

In desperation, the woman is alleged to have written to a friend in South Australia asking for the paltry sum of $20 to spend on food.

Once she received the money, the woman finally ventured to a supermarket where a local community volunteer noticed her distress and helped her with her shopping.

The charity worker who shared the story online urged Sydneysiders to watch out for their vulnerable neighbours and elderly relatives who may be struggling to get basic necessities as lockdown rolls on.

Three unvaccinated residents, men in their 30s, 60s and 80s from the city’s west and south-west, also died overnight while Premier Gladys Berejiklian announced new freedoms for those who are double vaccinated from September 13.

‘I am putting out a story I have just heard about an elderly lady in Cremorne who is on her own and not eating as she could not get out or sort out how to get food in the lockdown,’ the woman wrote on Facebook.

‘Luckily one of our volunteers found her in the local supermarket and helped her. She was on her own and had to send a letter to a friend in South Australia to send her $20.’

Services available to the elderly and vulnerable in lockdown

Call 1800 700 600 8am to 8pm Monday to Friday and 10am to 4pm Saturday to be connected to the aged care advocacy organisation in your state or territory.

Anyone struggling to find money for food can contact the emergency relief hotline on 0459 425 818.

This Facebook group allows people to donate food and essentials to those in need by posting their offerings online. Members in need can contact posters directly and receive donations through private messages.

The volunteer ended her post with a plea to readers, asking them to look out for the elderly and isolated.

‘If they are doing it tough let us know and we can organise a package for them – this is also for families who have lost jobs and suffering,’ she wrote.

‘We are sending out food to the west and inner-west but can help our own. Please keep your eyes and ears out.’

It is not clear which charity organisation is being referred to.

Daily Mail Australia has contacted the woman for comment.

Her post revealed the heartwarming community spirit of North Sydneysiders, racking up dozens of responses with many offering to lend a hand to anyone in need. 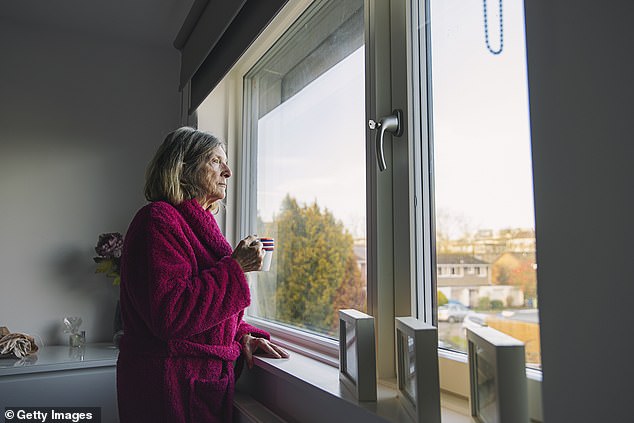 ‘This is just heartbreaking. I’m near the IGA in Cremorne and more than happy to help,’ one woman replied.

A second added: ‘Oh bless that’s so hard and sad to hear, I hope she is ok. Would do anything to help.’

Others said the woman should be registered with My Aged Care so she can be connected to a home support service.

Meanwhile some offered suggestions of simple ways to make life easier for the elderly.

‘When I’m out on my dog walk I always ask older people if they are ok, and if anything I can do for them. They love my dog so we have a bit of a chat about dogs. Poor things,’ said one woman.