In its weekly report, PHE claimed per-person cases plummeted by a fifth (21 per cent) in teenagers during half term, while infections also declined among schoolchildren and people in their 20s.

Infections continued to rise in middle-aged and elderly adults, however, with the biggest increase among people in their 60s, whose cases grew by six per cent.

People over the age of 60 are the ones most at risk of dying if they catch Covid-19 so keeping rates down in that age group is critical for the Government.

Although the second wave began with most infections happening among children and students, it has now penetrated older groups and led to surges in hospital admissions and fatalities.

PHE’s report also noted that test positivity – the proportion of tests that have positive results – rose last week to almost one in 10.

But this may be because testing tailed off dipped during half term because people don’t come forward as often during school holidays, officials said, meaning that even if the outbreak stayed the same size or shrunk slightly the positivity would still have risen. 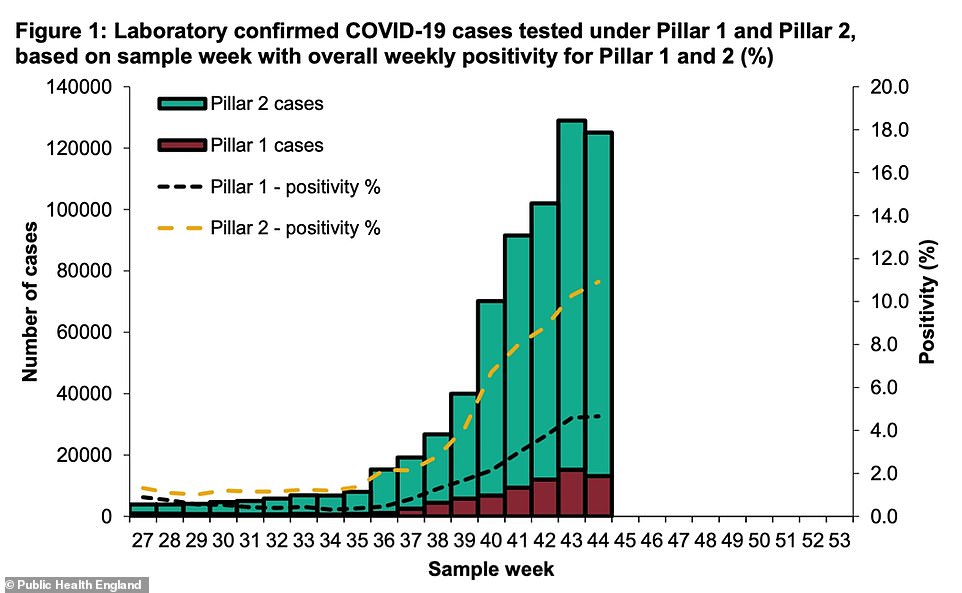 The number of people getting tested fell in the most recent week because it was half term, which PHE said was a normal effect of school holidays. As a result, positivity rose to around one in every 10 tests, which has concerned experts

Infections remain highest among people in their 20s, who had 333.6 positive tests for every 100,000 people between October 26 and November 1.

Cases rose by varying amounts in the older age groups. 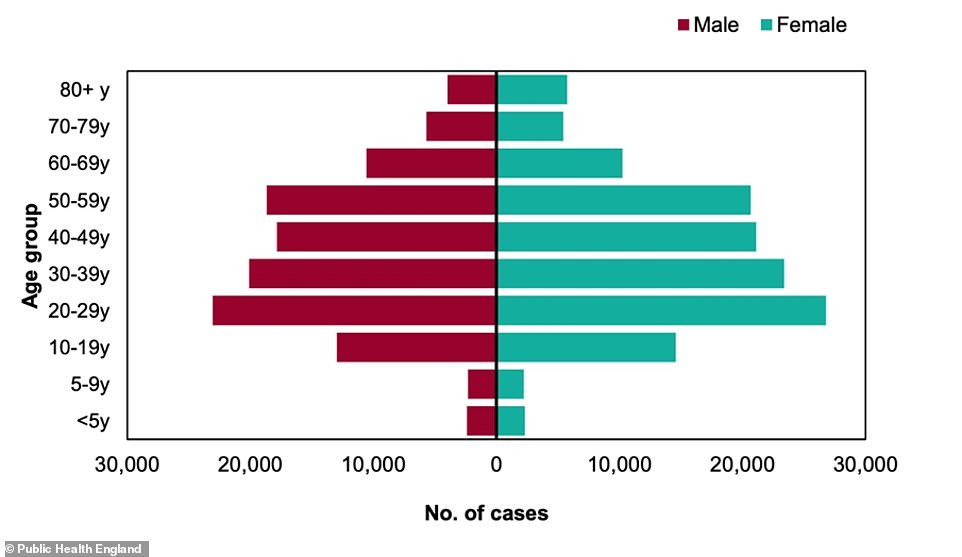 Data for the most recent week shows infections are still concentrated in younger people, with the highest per-person rates among people in their 20s and 30s 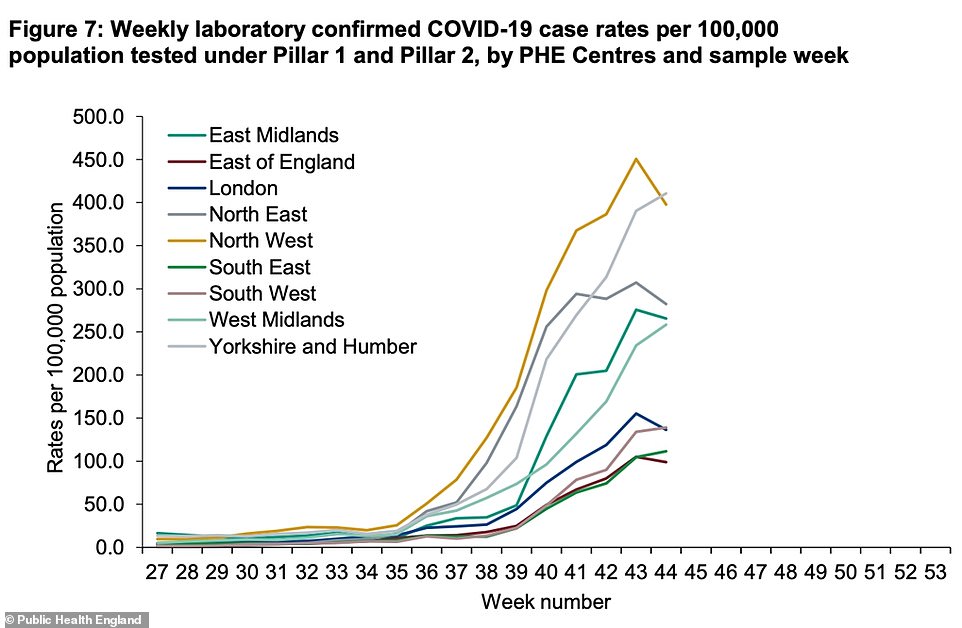 PHE urged caution in reading too optimistically into the declines among the younger groups.

Britain’s statistics watchdog today criticised Number 10 for not being transparent enough with the data it used to justify England’s second lockdown.

The UK Statistics Authority — which has slammed ministers before for overblown claims about their testing capacity — argued that numbers presented to the public have not always been backed up by ‘transparent information in a timely manner’.

It comes after the Government came under fire for using inaccurate figures in a televised address to the nation on Saturday night, when Boris Johnson announced another nationwide lockdown amid fears the NHS would become overwhelmed without urgent action.

Sir Patrick Vallance, No 10’s chief scientific adviser, presented a now-infamous graph suggesting there could be a shocking 4,000 deaths per day by December 20 if nothing was done.

But the figures came from an outdated model based on a projection that there would be 1,000 deaths per day by now, the start of November. In reality the daily average was lower than 200 meaning the prediction may have been up to five times too high.

‘The use of data has not consistently been supported by transparent information being provided in a timely manner,’ the UKSA statement said.

‘As a result, there is potential to confuse the public and undermine confidence in the statistics.

‘It is important that data are shared in a way that promotes transparency and clarity. It should be published in a clear and accessible form with appropriate explanations of context and sources.’

Its report read: ‘Detections of Covid-19 cases in England remained high in week 44 [October 26 to November 1].

‘Case detections decreased slightly compared to last week though this is likely to be driven by reduced testing over the half term period as well as a lag in results for the most recent days.

Experts have raised concern about the fact that test positivity is so high.

For testing to effectively keep on top of an epidemic the proportion of people testing positive needs to be low, and ideally below three per cent, according to the World Health Organization.

It remains the case that the majority of people who think they have Covid-19 actually don’t, but the balance is tipping so that an increasing proportion of people really do.

Professor James Naismith, an Oxford University biologist, picked up on this today when Test & Trace data was published, and said more tests need to be done to bring positivity down.

‘At above five per cent positivity, daily test numbers run an increasing risk of underestimating the growth of the virus,’ he said.

‘This is well understood by scientists. I have no idea why, given the positivity in pillar two, we are operating pillar two so far below the Government’s measure of capacity.’

The Public Health England report has also shown that coronavirus infection rates were already plummeting across England before the second national lockdown was imposed, suggesting Boris Johnson should have held his nerve for another week.

More than half of England’s local authorities – including virus hotspots Blackburn with Darwen, Manchester and Nottingham – recorded slides in infections in the last week of October, according to the surveillance report.

And more than three quarters of London’s boroughs also saw their infection rates start to diminish, figures suggest. The worst-affected boroughs, Ealing and Hammersmith and Fulham, were among those registering the biggest declines in infections. 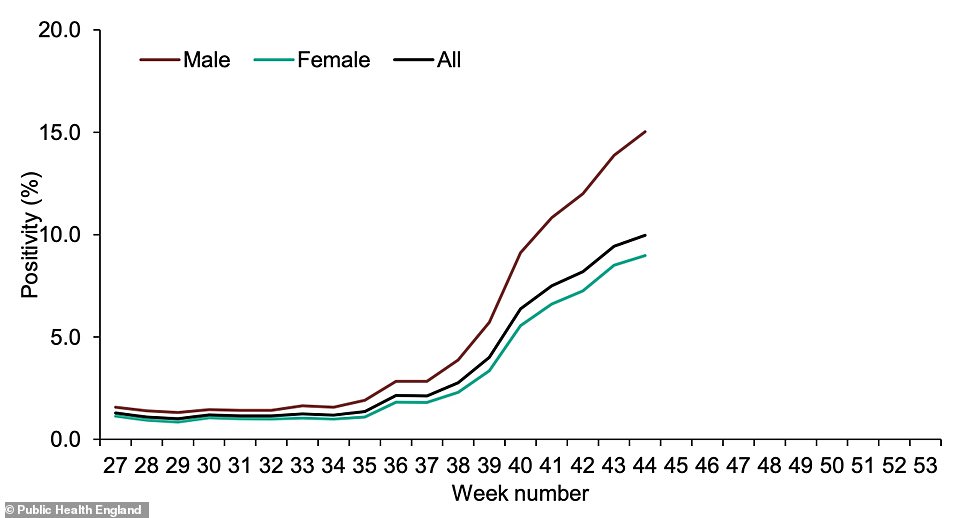 Test positivity is significantly higher among men than it is in women, with one in every seven men who gets tested actually having coronavirus, compared to fewer than one in 10 women 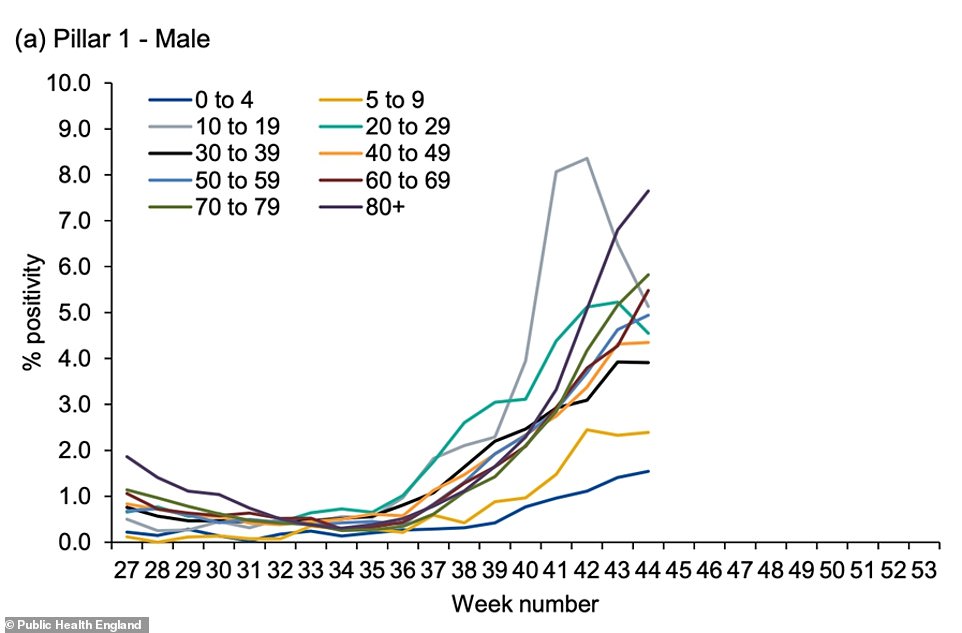 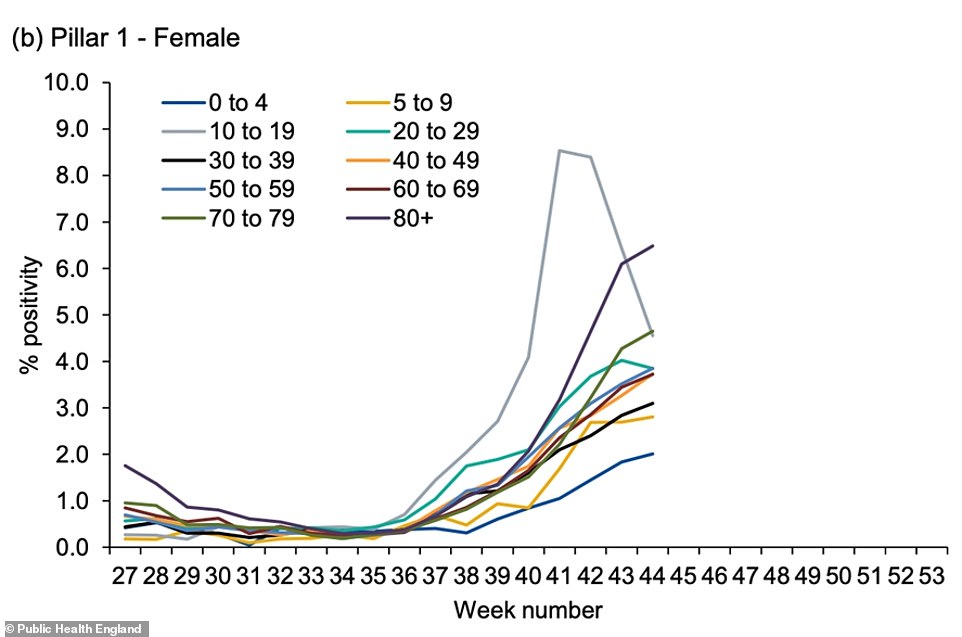 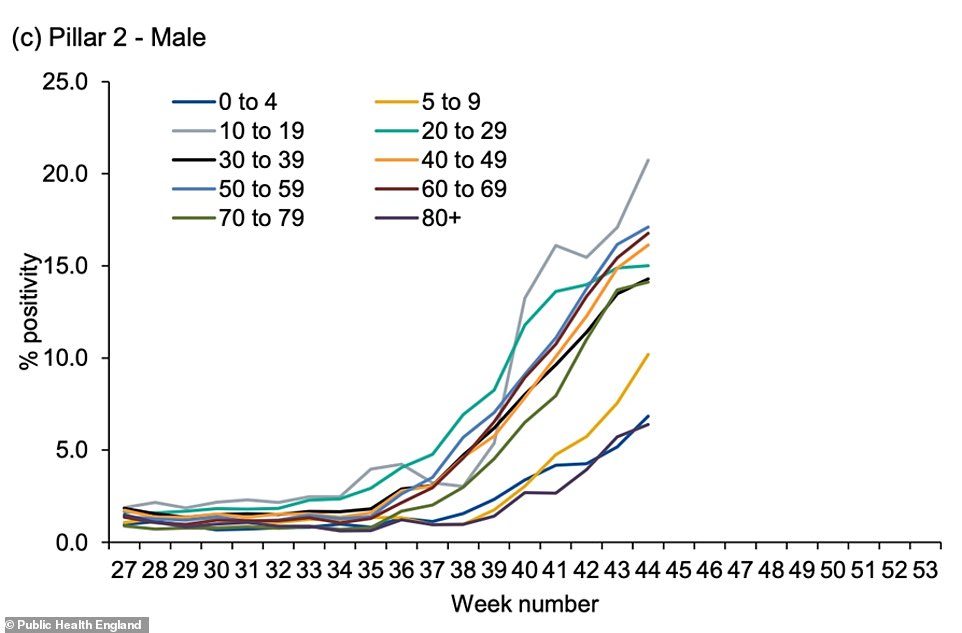 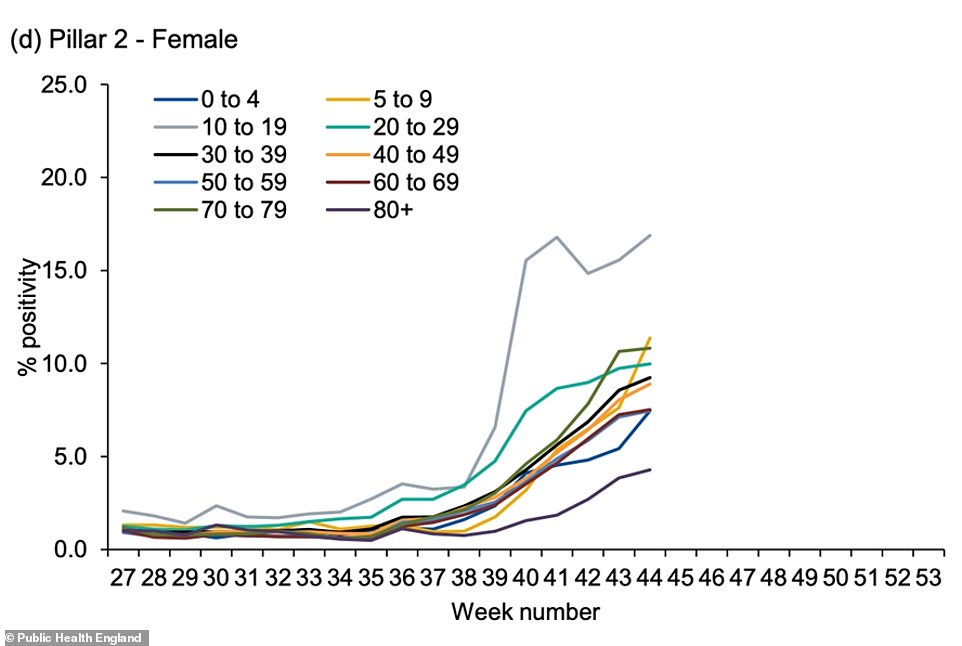 England’s Test & Trace bungling system reached a smaller proportion of at-risk people than at any point since it started, official data revealed today.

The contact-tracing programme, which phones, texts and emails people who have been close to someone who later tested positive for Covid-19, failed to get hold of 40 per cent of those potentially-infected cases in the week from October 22 to 28.

The system, headed up by call centres operated by private contractor Serco, had to try and get hold of 327,203 contacts in the most recent week when 139,781 people were referred after testing positive. This was more than in any other week.

Its lacklustre performance means that 131,136 people who might have been carrying Covid-19 without knowing it were never told by officials.

Oxford University’s Professor James Naismith said: ‘Based on what I see in this release I would not expect to change my previous assessment that system is not meaningfully impacting upon the disease.’

The brightening picture across the UK nation suggests the Government’s Three-Tiers – which had received international praise for being ‘very effective’ in the North – were successfully pummeling the virus into retreat before overly-concerned ministers pulled the shutters down once again.

The Prime Minister – who even admitted the Tier system was delivering the needed drop in infections – faced a three-hour roasting in the Commons yesterday over the brutal second shutdown, with his predecessor Theresa May accusing the Government of mangling its figures to force the policy through.

But MPs, supported by Labour, still voted through the England-wide shutdown by 516 to 38 last night, after the Government warned spiralling infections could see the NHS overwhelmed before Christmas.

As many as 82 out of England’s 149 local authorities recorded drops in their infection rates in the week up to November 1, data from Public Health England suggests.

In Tier Three Liverpool and Lancashire infections declined across all local authorities by more than ten per cent, in the latest sign that the harshest restrictions – forcing restaurants to offer takeaway only and banning mixing between households – were driving down infections.

Both had been under the restrictions for about two weeks, which experts say is long enough to reveal whether the measures are having an impact.

It takes up to seven days for someone who contracted coronavirus before the measures were brought in to develop symptoms, meaning the impact of the measures is not clear until another week to two weeks later.

Across Tier Three Greater Manchester seven out of ten local authorities saw infections slip downwards, while no area saw its infections rise at a level above seven per cent.

Data on the city’s infection rates is only available for the first ten days Tier Three measures were in place, meaning the impact of the restrictions is not yet clear. But the declines signal that the highest tier was achieving its aim of pushing down escalating infections.

In London, 26 out of 32 boroughs saw their infection rates fall, showing that Tier Two restrictions – banning people from visiting pubs and restaurants with other households – were also putting the plug on transmission.