Alarming spikes in COVID-19 infections in the South and West have raised fears the outbreak is spiraling out of control – as New York Governor Andrew Cuomo slammed states like Texas and Florida for reopening too quickly amid the pandemic.

Gov Cuomo, who was criticized for not opening New York as quickly as others, has accused states like Texas, Florida and Arizona of reopening recklessly and not using facts and science like his state did.

‘They have serious problems now. Not only will you have those states where more people will die, but it wasn’t even better for the businesses,’ he told NBC’s Today on Tuesday.

‘Now they’ve reopened and now they have an infection rate issue and they’re talking about closing again.

‘Anyone who thinks we could have reopened sooner, look at Florida, look at Arizona, look at Texas, look at the other 23 states that are going up – it shows we were smart and right.’

Currently, total infections in the US have surpassed 2.3 million and more than 120,000 Americans have died from COVID-19.

Cuomo said the current surge in cases and hospitals becoming overwhelmed in those states had vindicated what states like New York did by not reopening too early.

‘We did have a science-based reopening. We did it on the facts. We did control it… and that’s what works,’ he said. ‘Reopen intelligently then you won’t have a subsequent problem.

The United States saw a 25 percent increase in new cases in the last week compared to the previous seven days with Arizona, Florida and Texas experiencing record surges in new infections 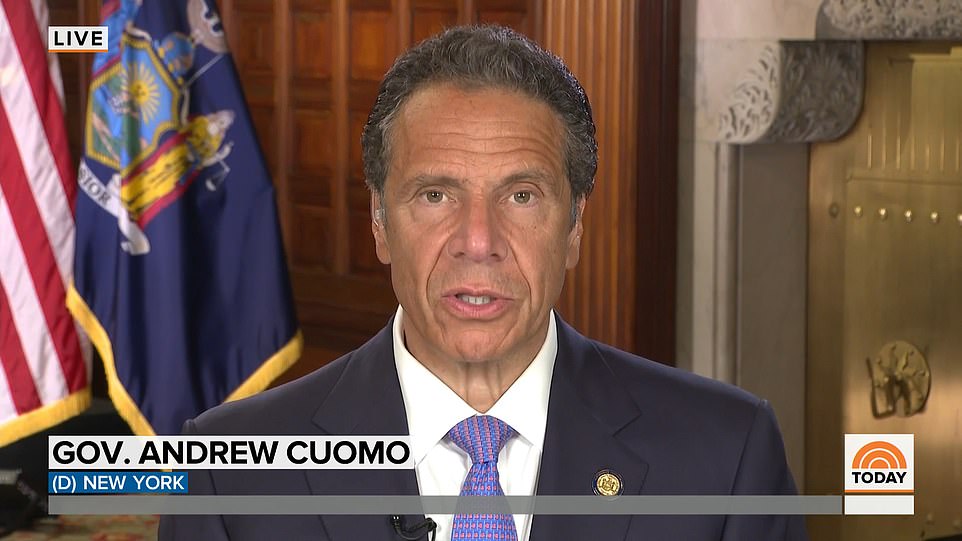 Gov Andrew Cuomo, who was criticized for not opening New York as quickly as others, has accused states like Texas, Florida and Arizona of reopening recklessly and not using facts and science like his state did

‘About half the states in this country, infection rates are going up. In New York the virus is going down. We’re now afraid that… people get on a plane and they come to New York… we don’t want them bringing the virus here.

‘We’re seriously considering a quarantine just to make sure people who come in from states with higher infections don’t inadvertently increase our infection rate.’

It comes as the United States saw a 25 percent increase in new cases in the last week compared to the previous seven days with Arizona, Florida and Texas experiencing record surges in new infections.

Twenty-five states reported more new cases in the week ended June 21 than the previous week, including 10 states that saw weekly new infections rise more than 50 percent and 12 states that posted new records, according to a Reuters analysis of data from The COVID Tracking Project.

Texas reported one of the largest rises in new cases at 24,000 for the week ended June 21, an increase of 84 percent from the previous week. The number of COVID-19 tests that came back positive in the state rose to 10 percent from 7 percent.

TEXAS CASES: Texas reported one of the largest rises in new cases at 24,000 for the week ended June 21, an increase of 84 percent from the previous week

TEXAS DEATHS: In Texas, deaths were down to 10 on Monday compared to the record 58 on May 15

The governors of all three states have attributed the increases in new cases to more testing, as well as younger people not following social distancing guidelines.

The alarming surges in cases – mostly in the South and West – continues to raise fears that the outbreak is spiraling out of control and that hard-won progress against the scourge is slipping away because of resistance among many Americans to wearing masks and keeping their distance from others.

Confirming predictions that the easing of state lockdowns over the past month and a half would lead to a comeback by the virus, cases surpassed 100,000 in Florida, hospitalizations are rising dramatically in Texas and Georgia, and a startling 1 in 5 of those tested in Arizona are proving to be infected.

In Texas, the Texas Children’s Hospital in Houston is now taking adult patients to provide additional beds as COVID-19 cases surge across the state.

Hospitalizations in Texas have been increasing for more than a month and Monday marked the 11th consecutive day Texas set a new high for COVID-19 hospitalizations.

‘It is snowballing. We will most certainly see more people die as a result of this spike,’ said Dr Marc Boom, CEO and president of Houston Methodist Hospital.

He warned that hospitals could be overwhelmed in three weeks and he pleaded with people to cover their faces and practice social distancing. 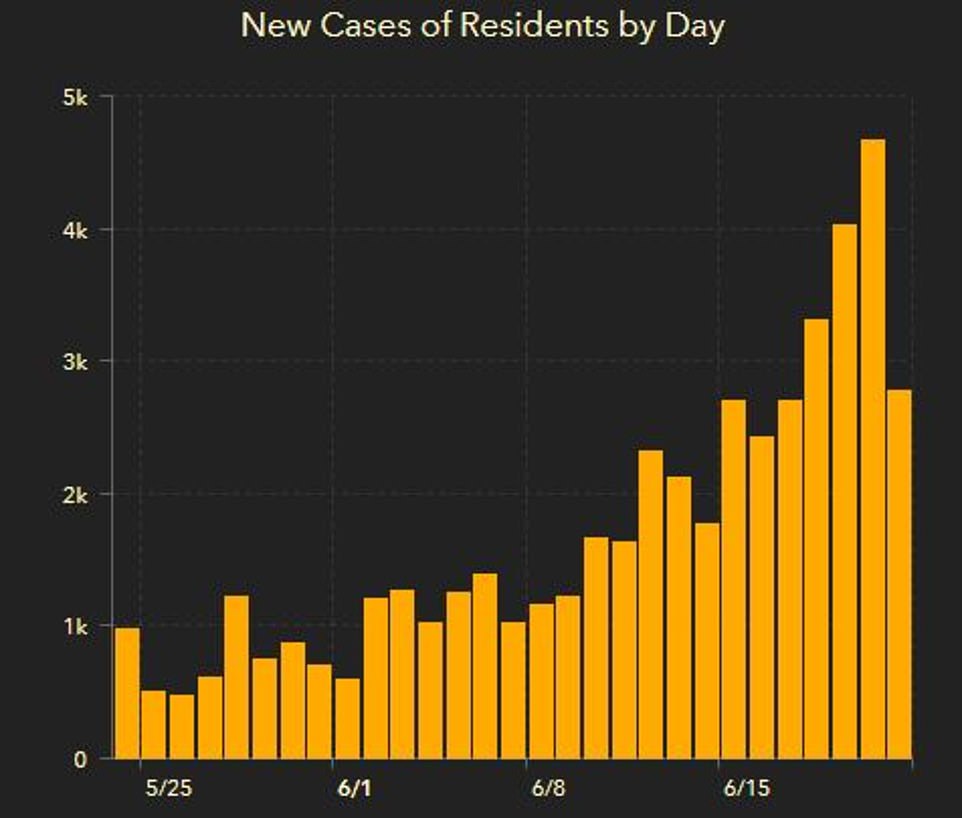 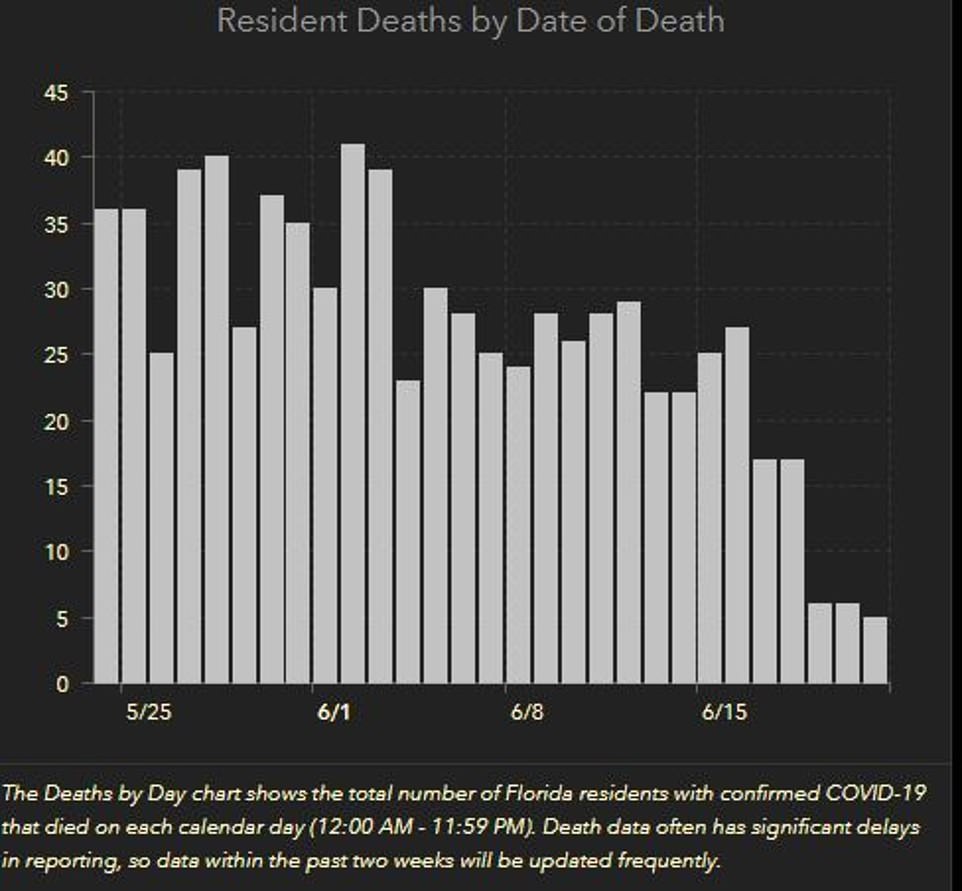 FLORIDA DEATHS: The state recorded 12 news deaths on Monday compared to the record 84 in early May

‘It is possible to open up at a judicious pace and coexist with the virus but it requires millions and millions of people to do the right thing,’ Boom said.

Texas is among a number of states – including Arizona, Alabama, Florida and South Carolina – whose governors have resisted statewide mask requirements, leaving the matter to local authorities.

In Georgia, the number of people hospitalized because of COVID-19 rose to 1,000 on Monday, erasing a month’s worth of progress.

Infections are at their highest level since the outbreak began – nearly two months after Georgia began lifting restrictions on businesses.

Gov. Brian Kemp has required face coverings by waiters, barbers and others working face-to-face with customers but has largely let businesses decide whether customers must wear masks.

Arizona, in particular, is seeing disturbing trends in several benchmarks, including the percentage of tests that prove positive for the virus. Arizona’s is the highest in the nation.

The state’s positive test rate is at a seven-day average of over 20 percent, well above the national average of 8.4 percent and the 10 percent level that public health officials say is a problem.

When the positive test rate rises, it means that an outbreak is worsening – not just that more people are getting tested. 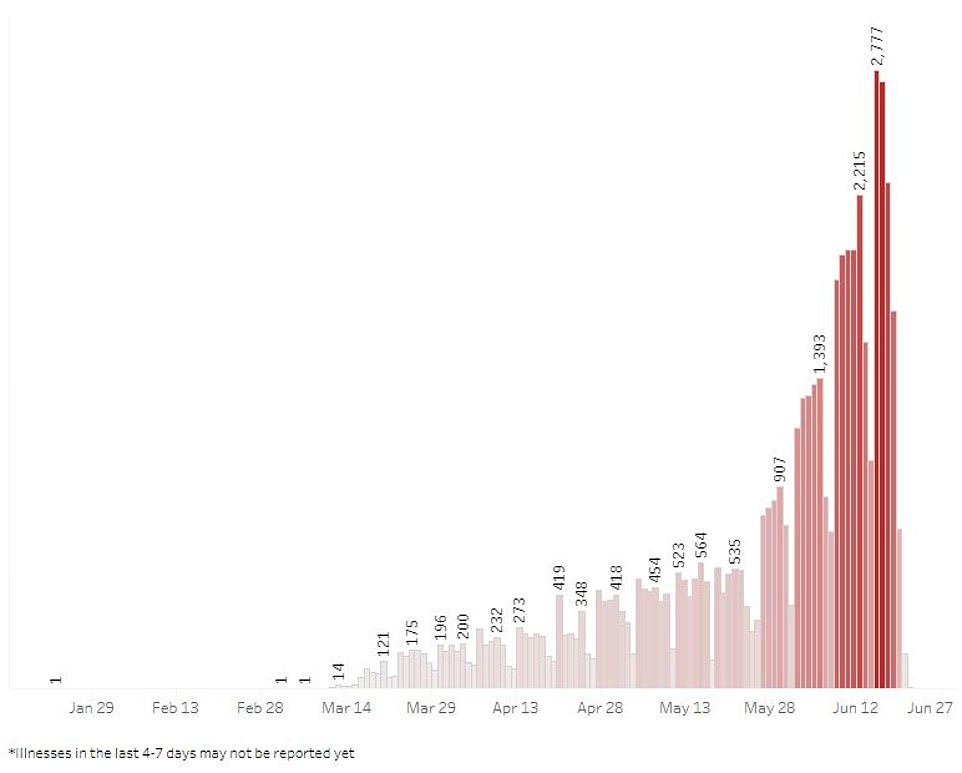 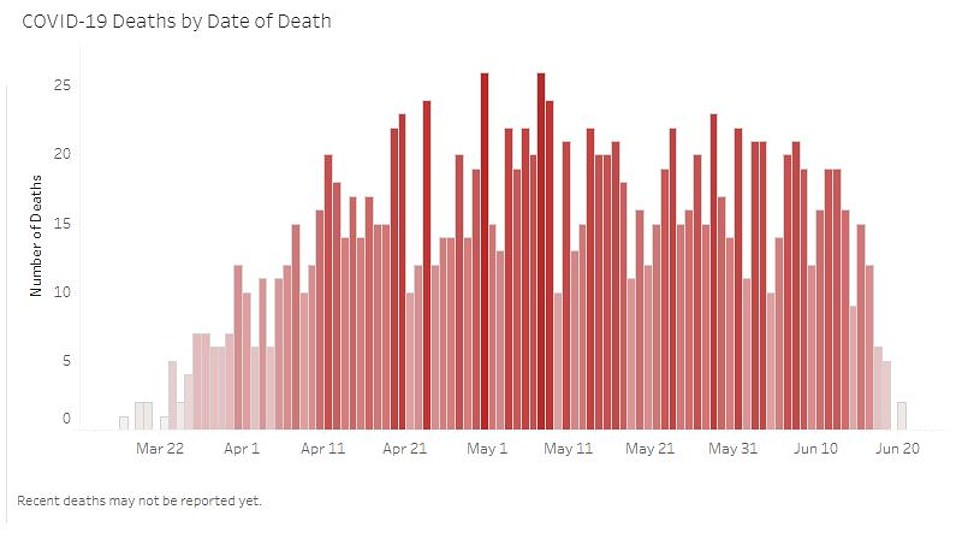 ARIZONA DEATHS: The state recorded 42 new deaths on Monday – compared to the record 67 deaths recorded on May 8 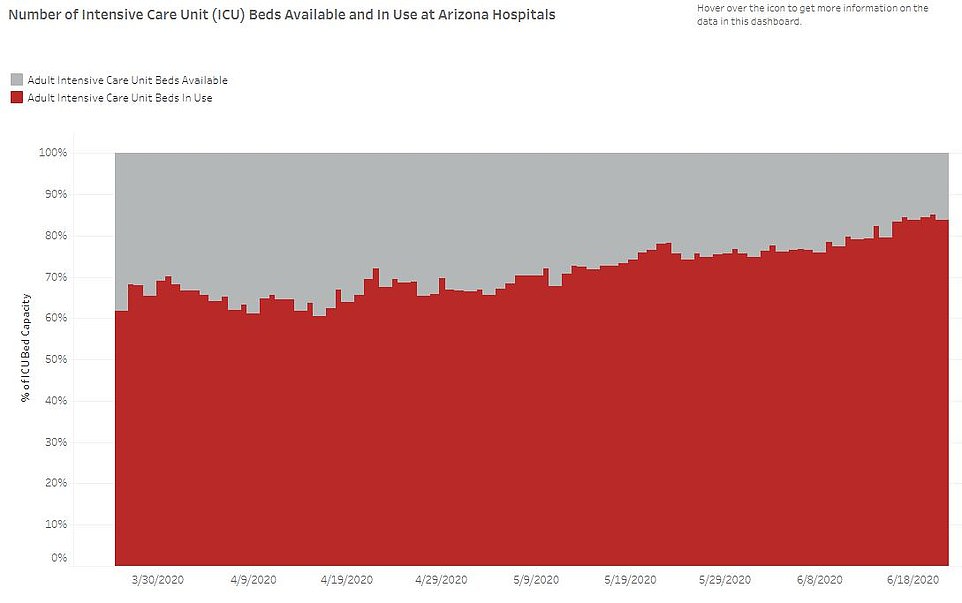 ARIZONA HOSPITALS: Hospitalizations in Arizona appear to be declining but the intensive care bed usage in hospitals is increasing. Over the weekend, 85 percent of ICU beds (above) were in use across the state

In Louisiana, Gov. John Bel Edwards extended restrictions on businesses because of a troubling uptick in cases, following the example set by Utah and Oregon last week. Louisiana has recorded more than 3,000 deaths.

‘There are a lot of people out there saying they are done with this virus. Well, the virus isn’t done with us,’ Edwards said.

Meanwhile, New York City, once the most lethal hot spot in the US, lifted more of its restrictions on Monday. Restaurants can serve diners outdoors, customers can browse through stores and get a haircut and children can return to playgrounds.

While President Donald Trump says the surge in new cases is down to increased testing, public health officials say it only accounts for some of the increases as people continue to relax social distancing measures and states slowly reopen.

As infections continue to surge, the number of daily deaths appears to be gradually declining across the country.

But health experts have warned the fatality rate often lags several weeks behind the infection rate and could potentially shoot back up again.

Experts say the fact that younger people – who are less likely to be hospitalized – are now accounting for a large number of the new cases could also have an impact in several weeks.

Young people could currently be infecting their elderly relatives and other at-risk people, which could drive up hospitalizations and deaths.

Former FDA boss Scott Gottlieb said a high percentage of those being hospitalized are younger adults.

‘In March, 82 percent of those hospitalized in NYC were over 45. Today, 50 percent of hospitalized in Dallas are under 50. Is this just a function of a much higher rate of current infection among young, or something else?’ he tweeted.

Currently, total infections in the US have surpassed 2.3 million and more than 120,000 Americans have died from COVID-19