A landscape photographer whose work was cancelled during lockdown used the time to self-publish a book of his favourite images to inspire others.

Thomas Heaton, 36, released a tome containing 53 incredible pictures he’d taken, from images of majestic mountains to photos of epic waterfalls, showing his journey as a photographer over the past five years.

The 118-page book – Landscape Photography On Location with Thomas Heaton – follows his adventures all over the world, and also features photos taken closer to his home in North East England.

A stunning image taken by Thomas of Iceland’s incredible Haifoss waterfall. He has used lockdown to self-publish a book of his favourite images 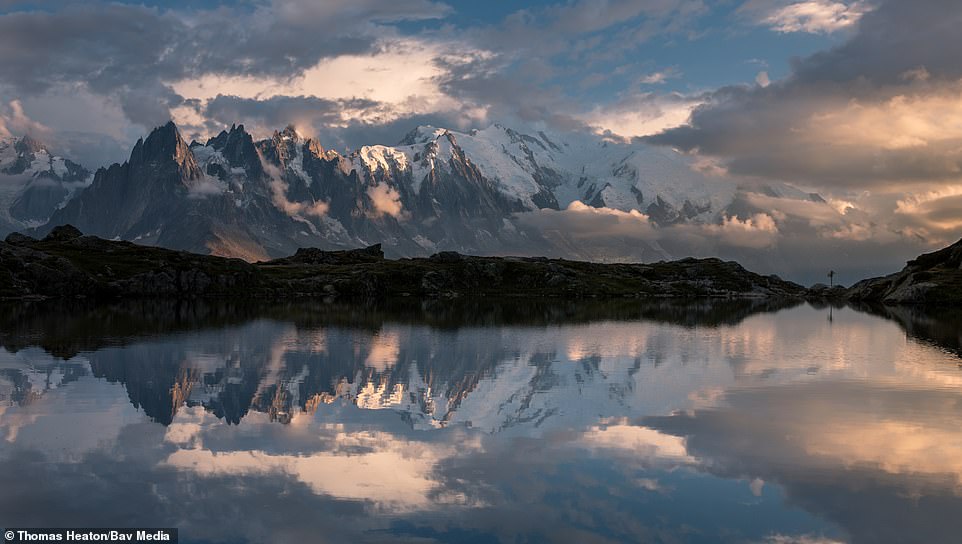 Thomas’s book, called Landscape Photography On Location with Thomas Heaton, follows his adventures all over the world. This image shows Lac de Chesery on the Mont Blanc massif 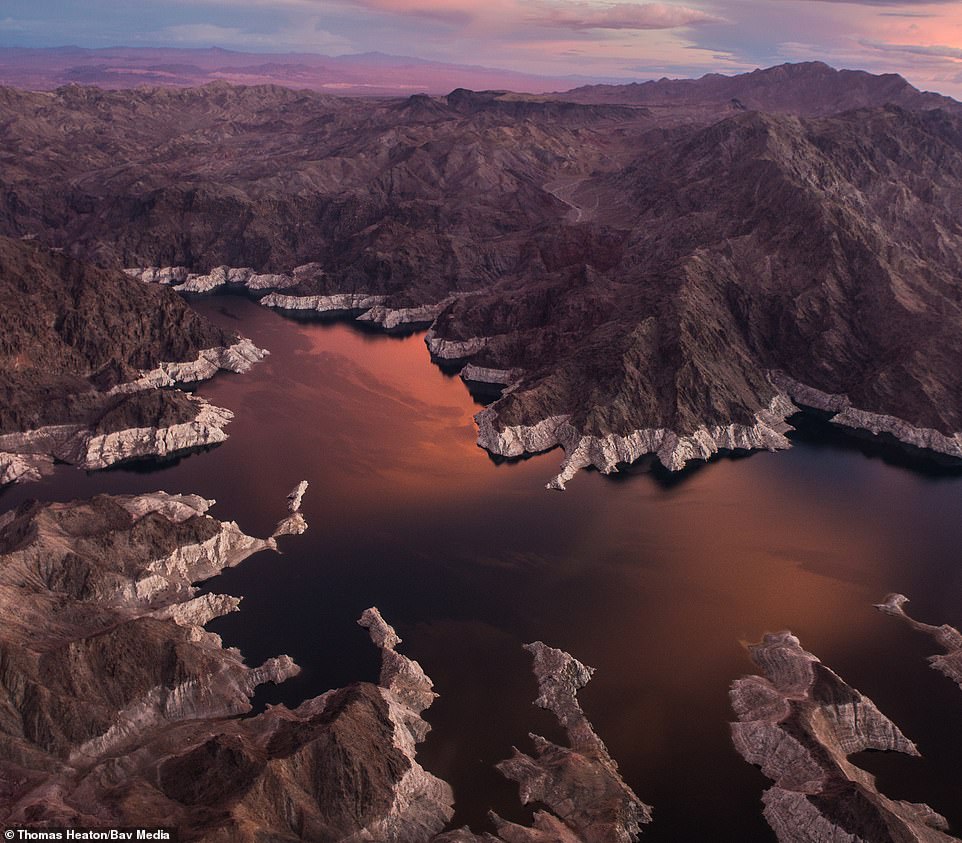 Thomas snapped this incredible photo of Lake Mead, on the Colorado River, during sunset. He hopes his book encourages others to take up photography 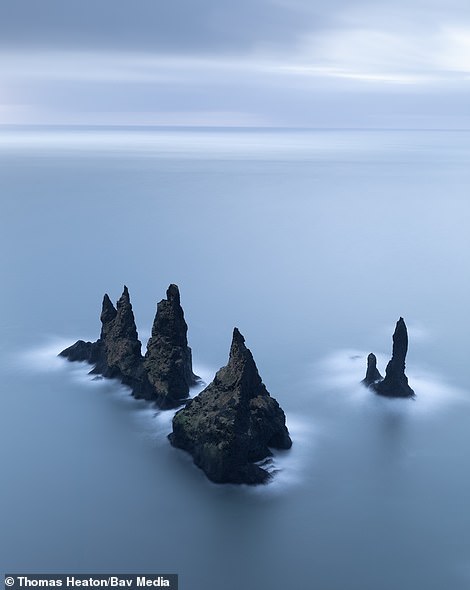 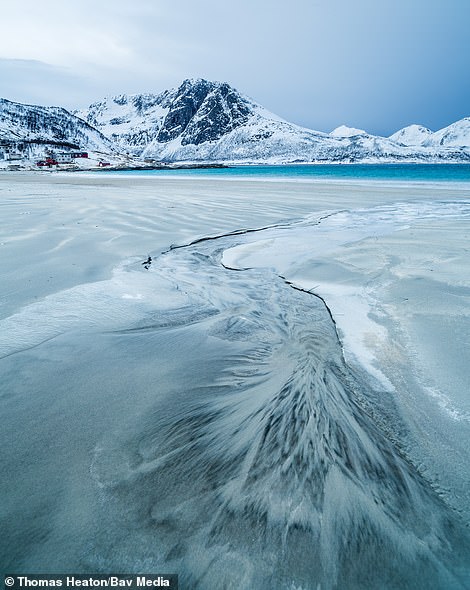 On the left is an amazing shot Thomas took of jagged sea stacks in Iceland. Pictured right is a mesmerising wintry scene in Grotfjord, Norway 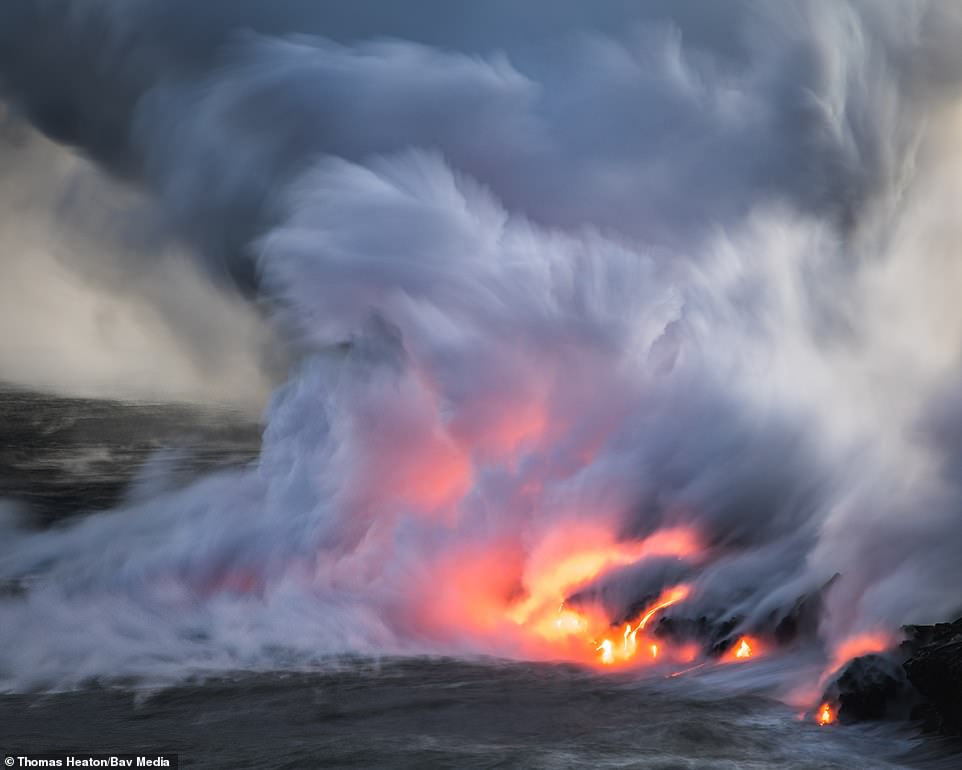 This is one of Thomas’s more thrilling snaps – it shows lava flowing from Kilauea, an active shield volcano in Hawaii

He said: ‘When lockdown happened, I suddenly had my whole year of work cancelled, so I decided to turn it into something positive and finish my photography book.

‘I think photography in the past five years has become dominated by the gear and the idea of keeping up with the Jones’s and chasing perfection by photographing iconic scenes.

‘I believe there needs to be a step back away from the technical aspects of photography to the emotional side of things. There is a story behind every image and that’s what I write about in this book.’ 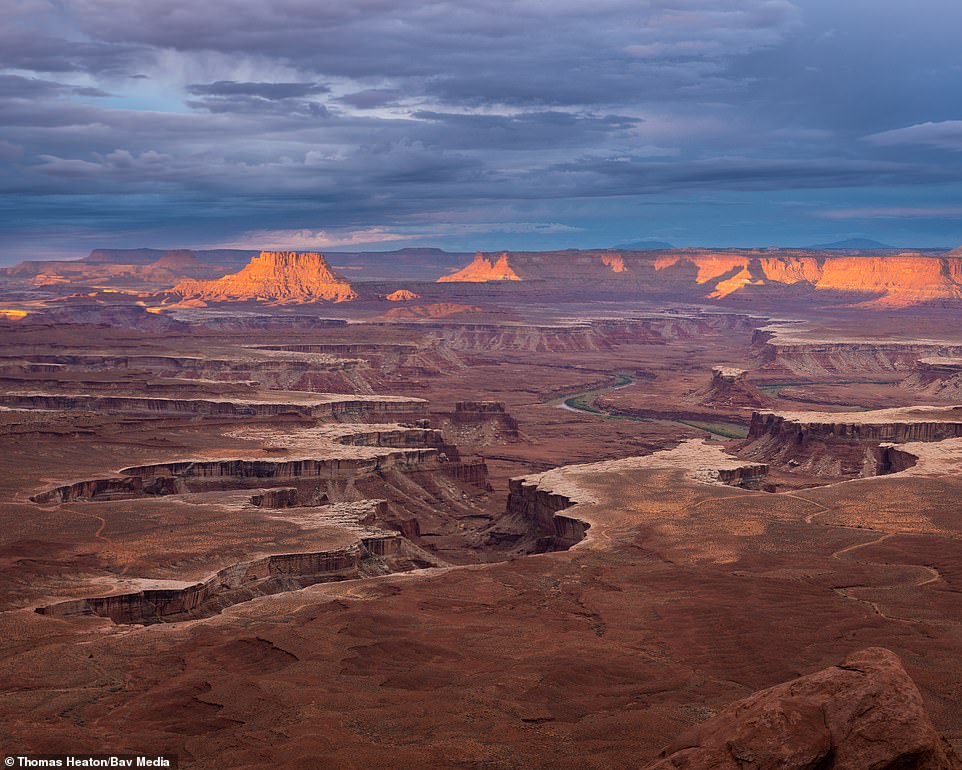 Thomas first started taking photos when he was 16 and now has a YouTube channel with more than 400,000 followers. He captured this stunning shot in Canyonlands National Park in Utah 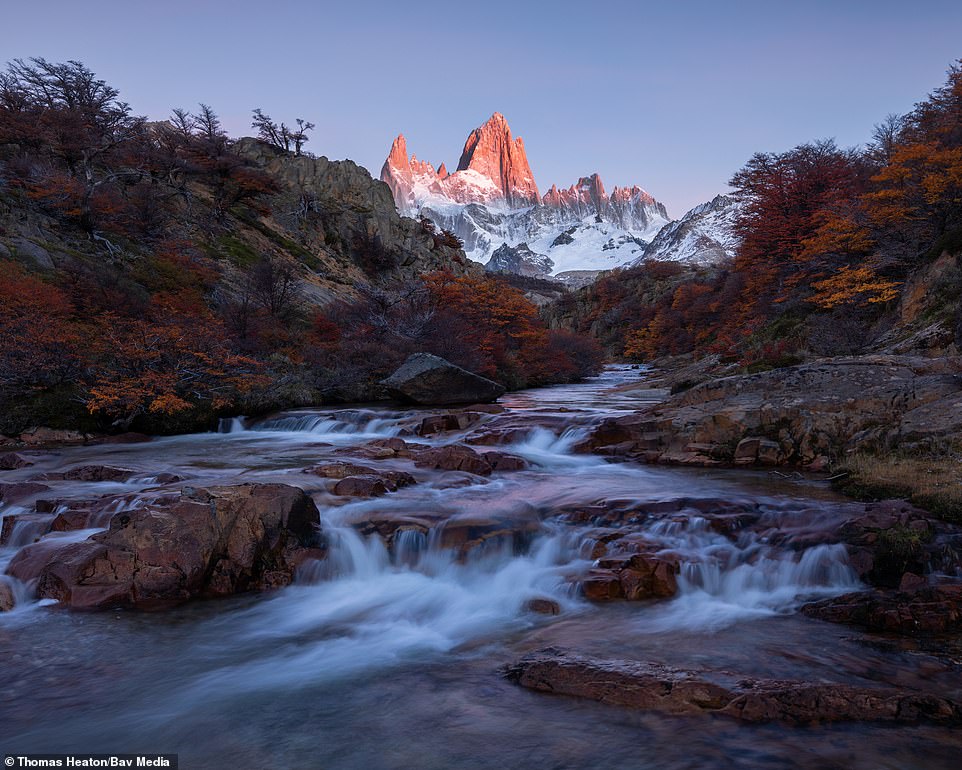 Thomas hopes that readers of his book ‘take away the fact you don’t need to impress anyone else but yourself’ when taking pictures. This image shows the Rio de la Cascada river in Patagonia 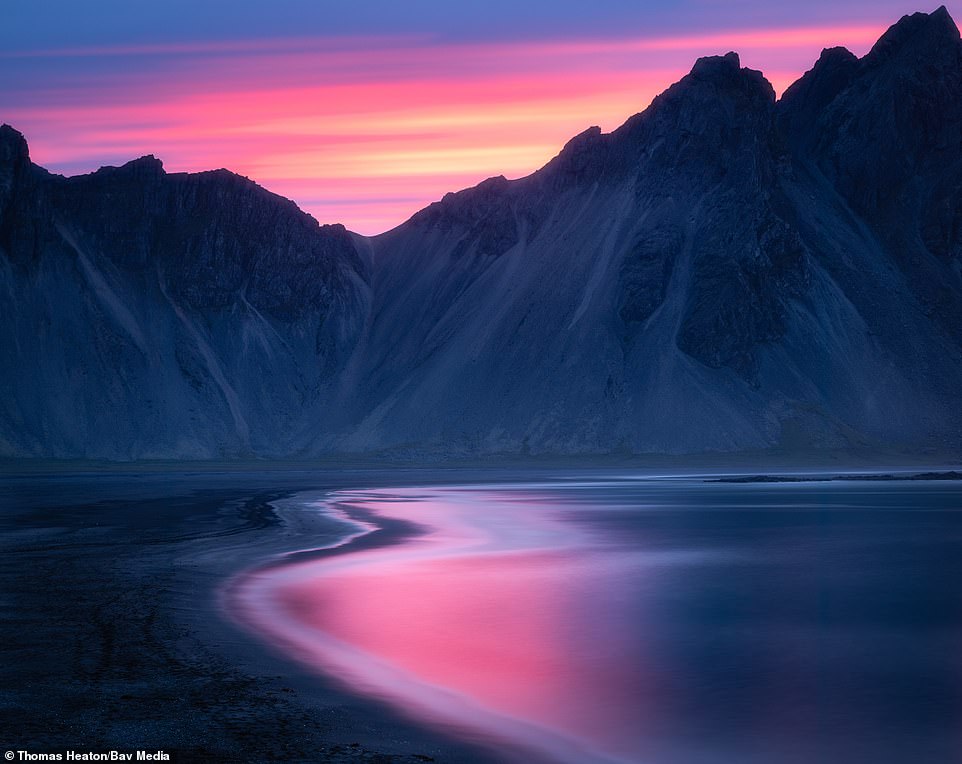 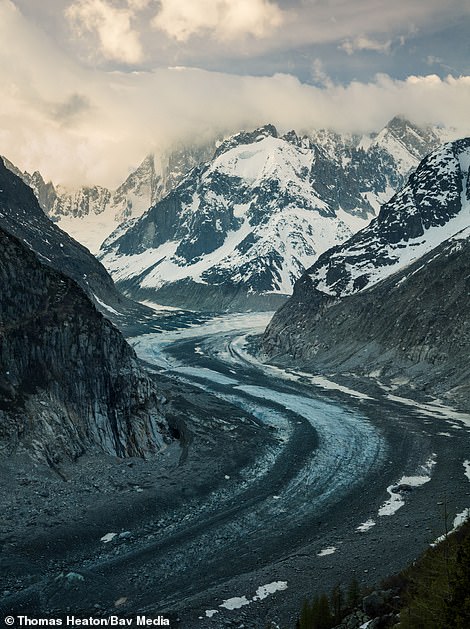 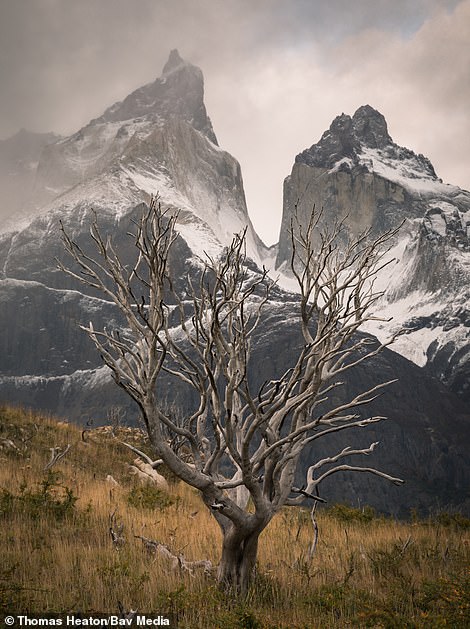 On the left is an incredible shot of the Mer de Grace glacier, which can be found on the northern slopes of the Mont Blanc massif, in the French Alps.  On the right is a striking image of the Torres del Paine National Park in Patagonia 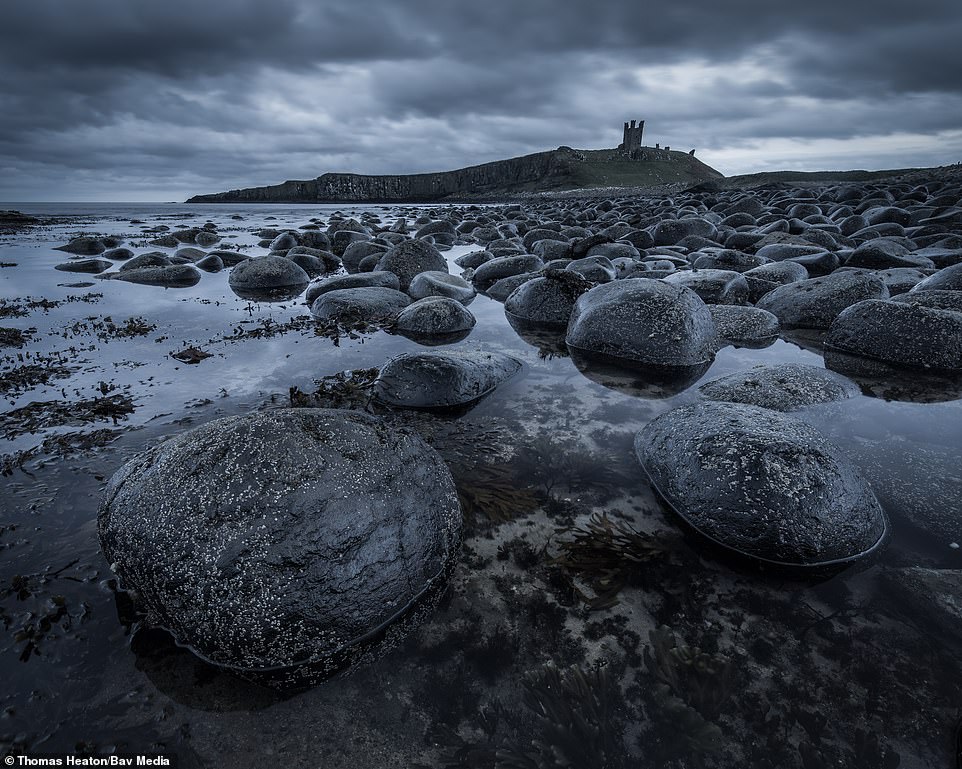 Thomas didn’t have to travel far from his home in North East England to capture this haunting shot. That’s because it shows Dunstanburgh Castle on the Northumberland coastline

The book begins with photos taken high in the mountains in some of the most picturesque places in the world and finishes at ground level, with pictures that could have been taken in a back garden.

He explained: ‘With each picture, I reveal the story behind it. For example, on one occasion I was in Nepal taking pictures at 4,800 metres (15,750ft) and got terrible altitude sickness, so I had to walk for a day to the next village, which was 1000 metres lower in altitude before it got worse.

‘With most of the photos I also include a QR code, which people can scan and it takes them through to my YouTube episode on that particular image so they can find out even more.’

Thomas’s book features 53 of his favourite landscape images. This one shows Diamond Beach, also known as Breioamerkursandur, on the south coast of Iceland 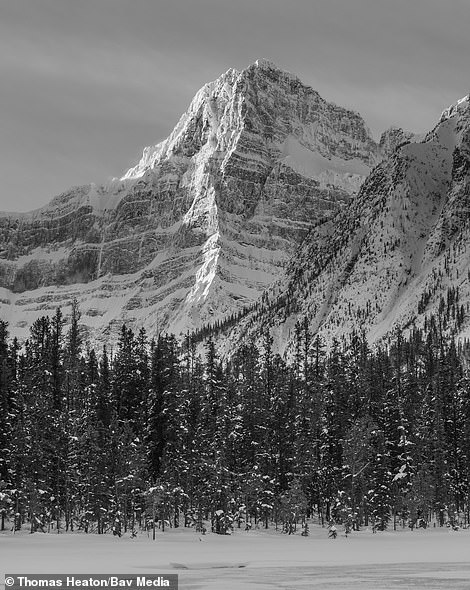 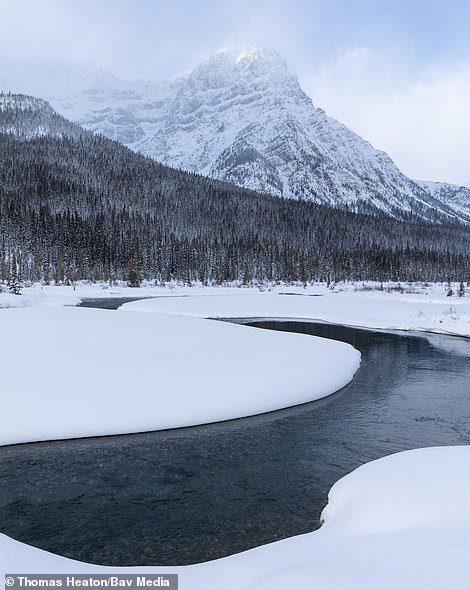 Both of these photographs were taken in Canada’s epic, highly photogenic, Banff National Park 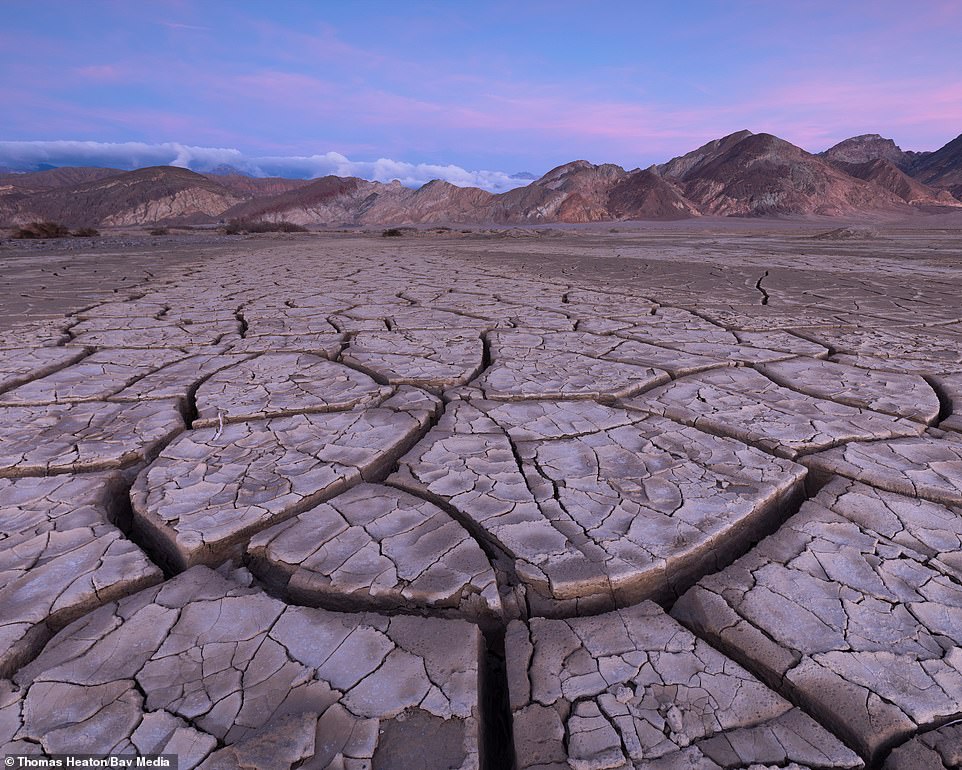 Thomas said: ‘There is a story behind every image and that’s what I write about in this book.’ Pictured is the arid landscape of the USA’s Death Valley 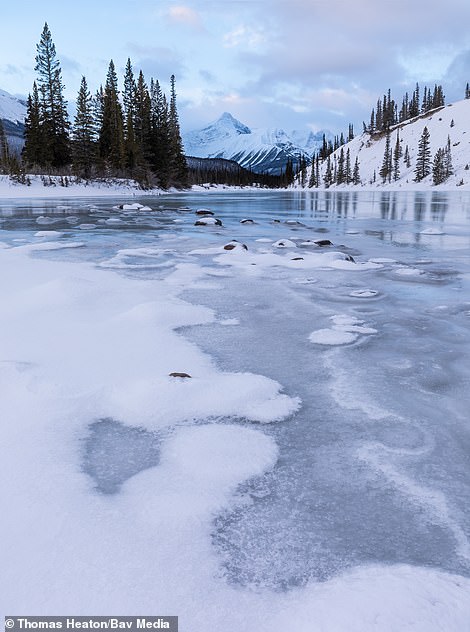 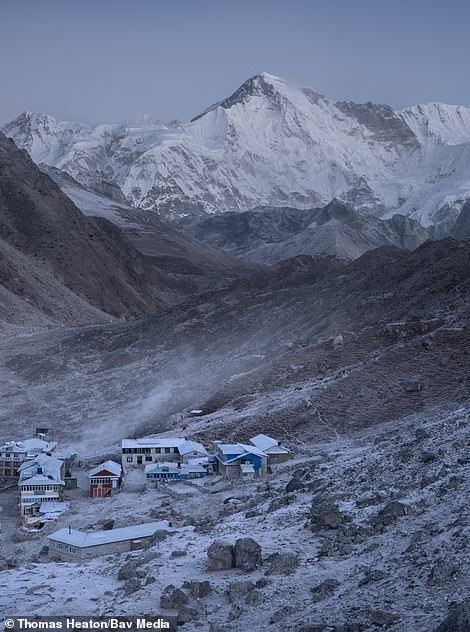 On the left is a stunning shot of a frozen riverbank in Canada’s Saskatchewan province. Pictured right is the small village of Gokyo, which lies at the foot of Gokyo Ri – a 17,575ft peak in Nepal 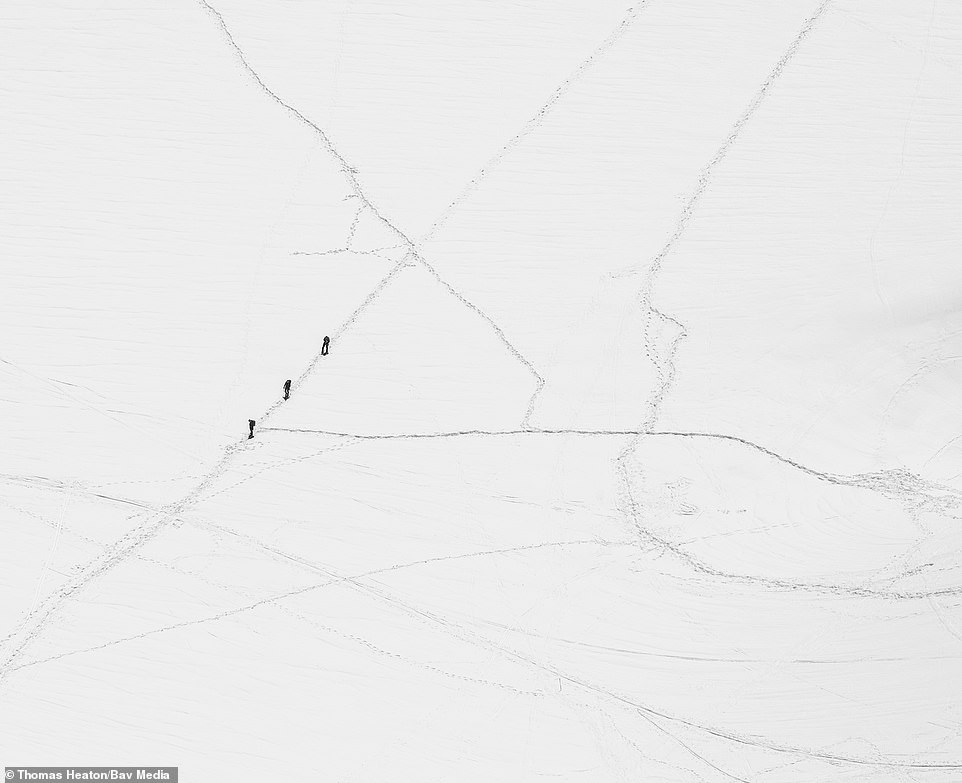 This incredible shot by Thomas shows three people descending Mont Blanc – one of the highest mountains in Europe at 15,780ft (4,810 metres) 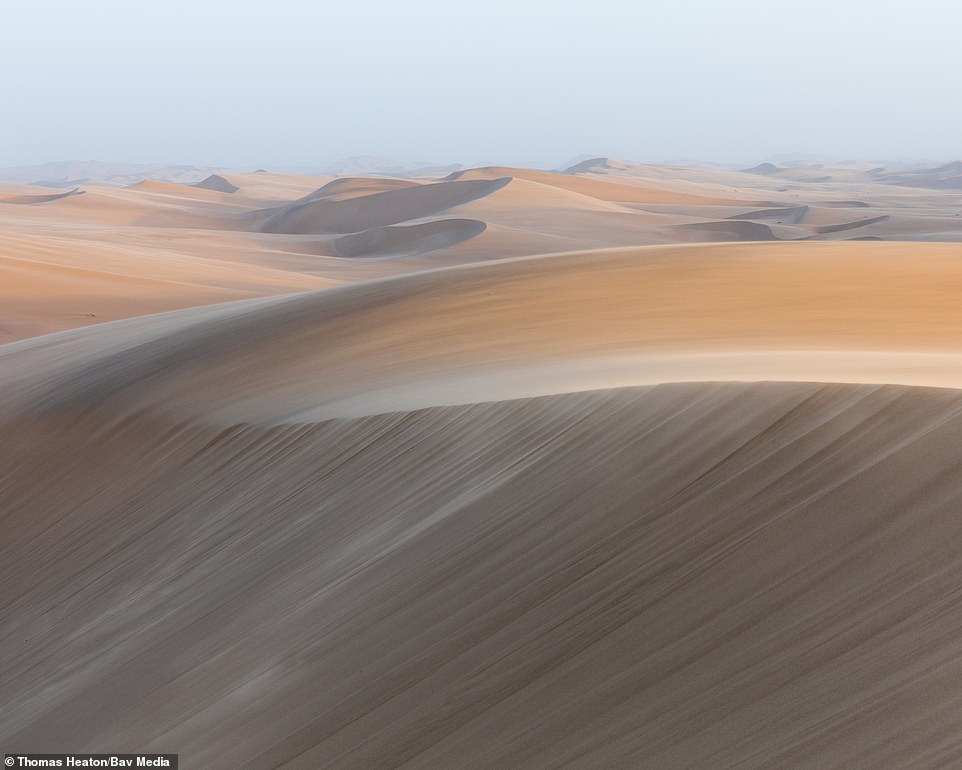 Thomas says he hopes his book will encourage people to take ‘pictures for themselves, rather than what social media expects’. This image shows the dunes near Swakopmund in Namibia

Thomas, who first started taking photos when he was 16 and now has a YouTube channel with more than 400,000 followers and 32 million views, said he hopes the book encourages others to take their own pictures.

He added: ‘I hope people take away the fact you don’t need to impress anyone else but yourself. I hope they will take pictures for themselves, rather than what social media expects.

‘My book starts in the mountains and ends with small landscapes and I think my favourite images are the latter ones, which are more intimate pictures.

‘The book isn’t full of exotic locations. I want to show that you don’t need to travel halfway around the world to take amazing pictures, you can take incredible images just in your back garden.’ 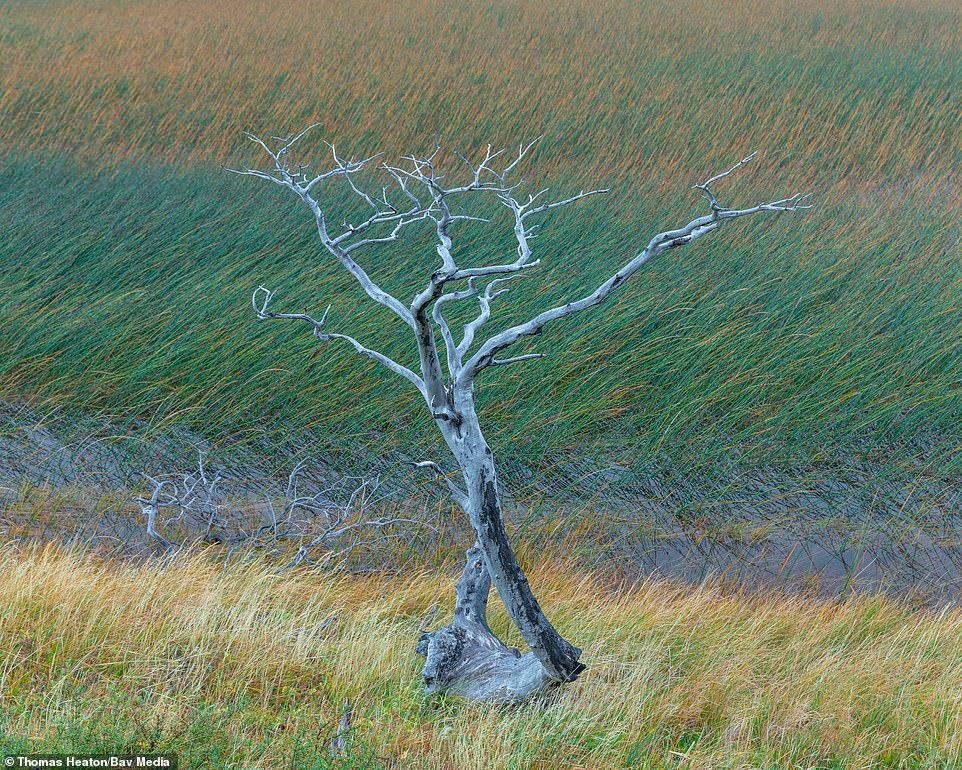 Thomas has had more than 32million views of his YouTube channel and has over 214,000 followers on Instagram. He took this image of a lone tree in Torres del Paine National Park 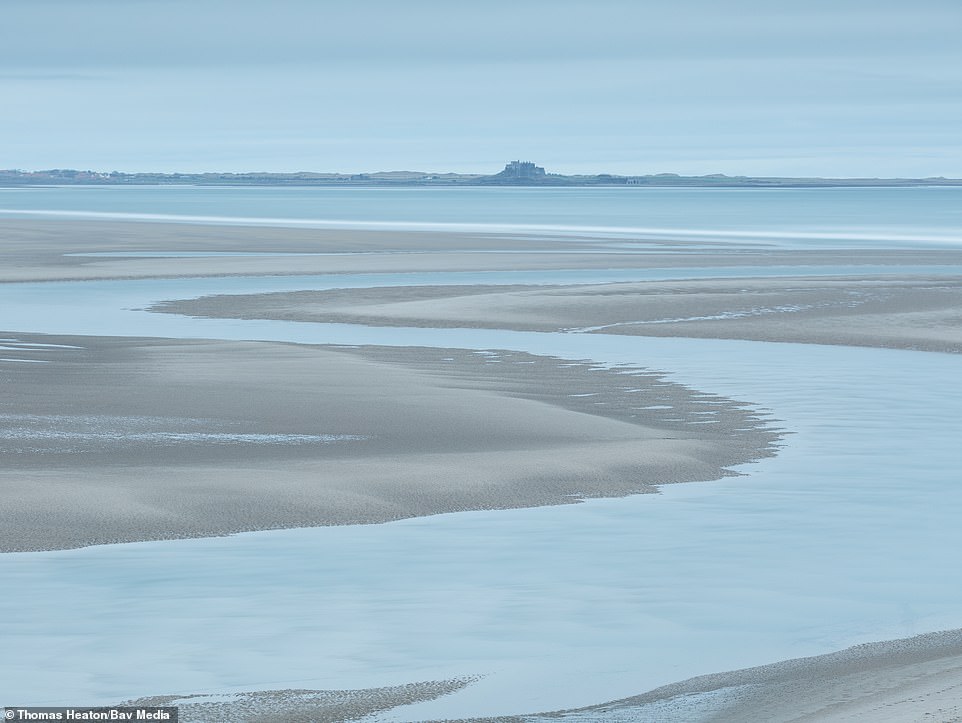 This stunning shot shows the view out across Bundle Bay in Northumberland. Thomas said: ‘I want to show that you don’t need to travel halfway around the world to take amazing pictures’ 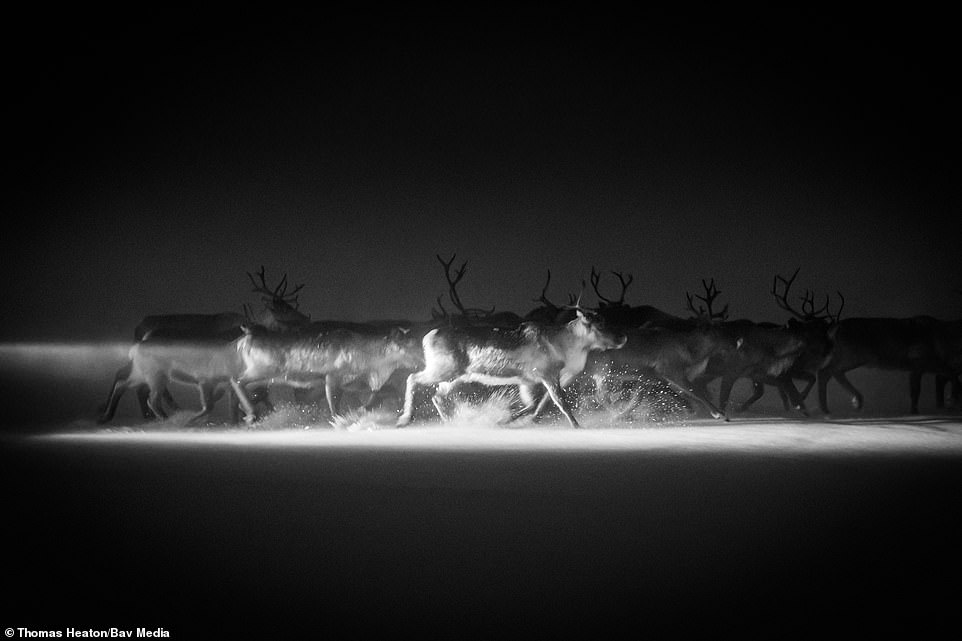 This incredible image shows reindeer running in the snow in Sweden. In his book, Thomas includes QR codes that when scanned take people through to a YouTube video about that particular image 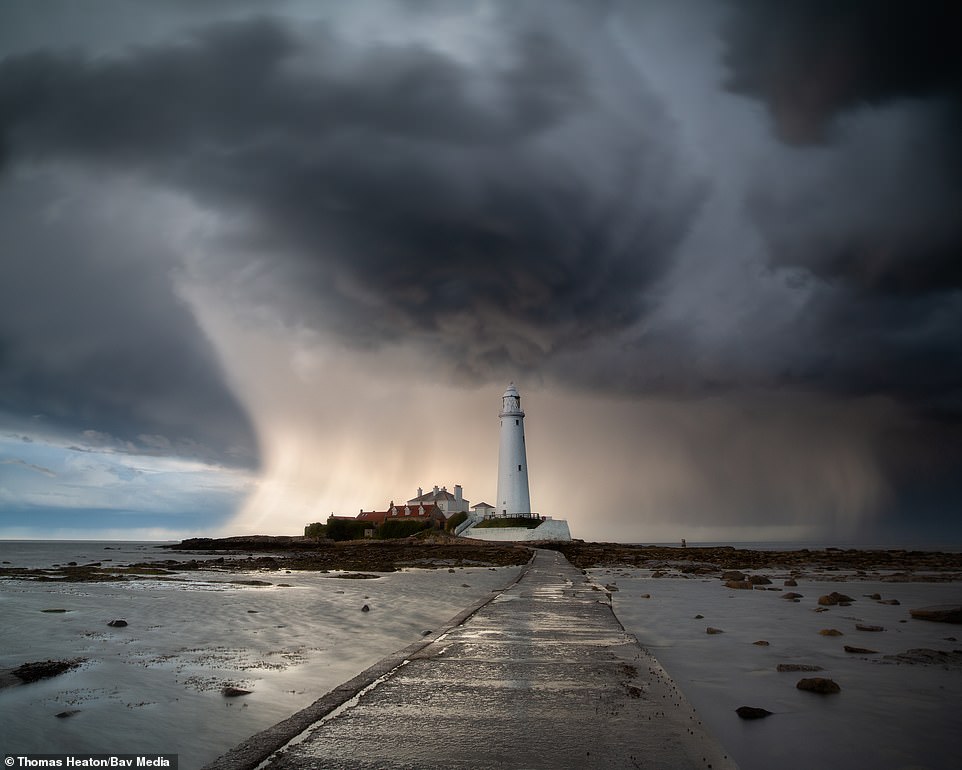 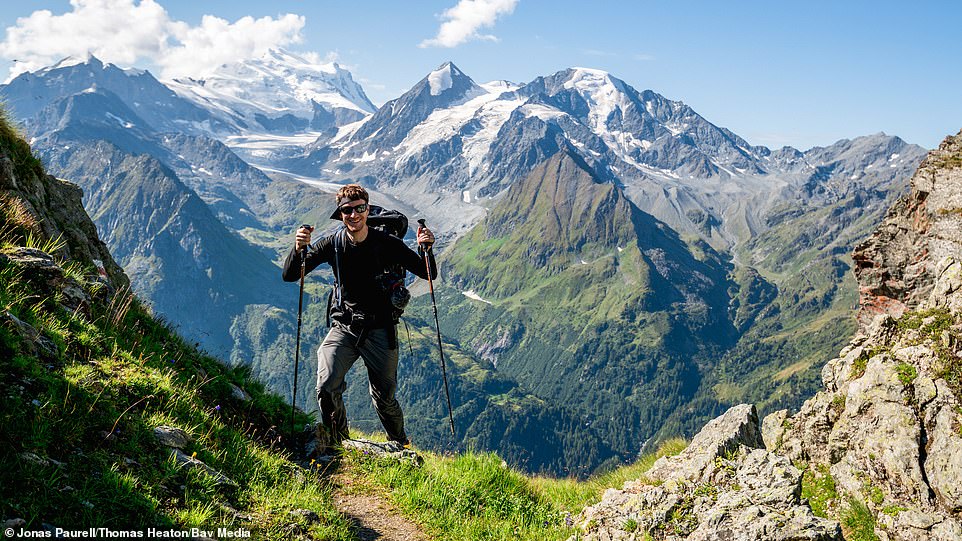 Thomas pictured hiking in Switzerland. He said: ‘I believe there needs to be a step back away from the technical aspects of photography to the emotional side of things’