Testing for inter-state travel should be scrapped because it is interfering with Australia’s response to the Omicron crisis, national cabinet has been told.

Prime Minister Scott Morrison said testing centres are being clogged by perfectly healthy travellers, using up resources and deterring symptomatic patients from queuing up for a swab.

Chief Health Officer Paul Kelly said it was very hard to get a test in NSW, the ACT and Victoria and told premiers this was preventing an effective testing and tracing response, which is a key defence against virus outbreaks.

The Prime Minister said there was a ‘positive discussion’ on testing requirements but said states such as Queensland, South Australia and Tasmania wanted more health advice before scrapping the requirement.

Queensland Premier Annastacia Palaszczuk earlier said she would not consider removing her state’s testing requirements until the New Year.

Mr Morrison said only 1 in 1,000 travellers were returning positive tests, compared to 20 in 1,000 close contacts who were waiting up to three days for results.

‘The medical expert panel will give further advice on whether testing is required at all for travel or we can move to the more simple method of rapid antigen testing which will reduce the queues and make the queues more manageable,’ he said.

He said the premiers agreed that a national definition of a casual contact was needed and top scientists have agreed to report back in two weeks.

‘We have asked the AHPPC within the next fortnight for a clear recommendation on that,’ Mr Morrison said.

‘We cannot have different rules in different places about what a close contact is and what a casual contact is.

‘And there is even an argument which says that there shouldn’t be any requirement to have a casual contact definition at all,’ he said. 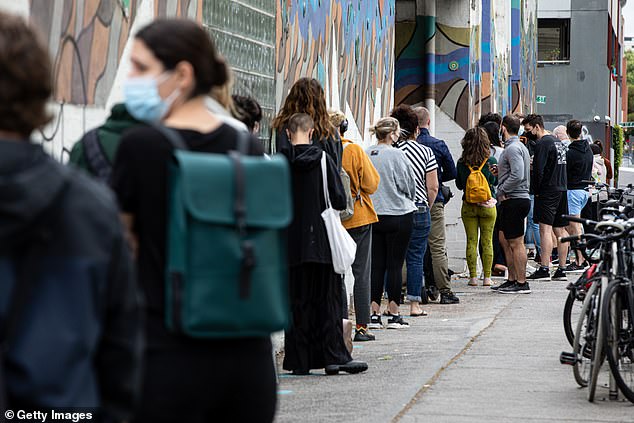 People queue outside a Covid-19 testing site in Collingwood, Melbourne on December 22. Chief Health Officer Paul Kelly said it was very hard to get a test in NSW, the ACT and Victoria due to travel testing

But he stopped short of recommending mask mandates, comparing the measure to wearing sunscreen which is a good idea but optional.

‘Whether or not that’s mandated, that’s what we should be doing,’ he said.

The Prime Minister has increased funding for GPs and pharmacies by $10 per jab to speed up the booster rollout.

‘We’ll be increasing them up by $10 a day in addition to what they’re already getting now. And we think that’s important, particularly over the summer months, when normally just like many other Australians, they’d be looking to take leave,’ Mr Morrison said.

He also urged premiers to re-open their vaccine hubs after some 256 closed down since winter.

The PM revealed there is no change to the five-month timeframe between second doses and booster shots at this time but experts are reviewing the evidence every week.

The PM called the emergency meeting on Monday as Covid cases ticked up to 3,957, a figure that was surpassed on Tuesday with 4,576 infections and again on Wednesday with 5,716.

National cabinet was not due to meet until the New Year but Mr Morrison said the ‘informal’ meeting was arranged to ‘give everybody an update on the most recent information we have’ on the more infectious Omicron strain which is rapidly spreading across Europe and the US. 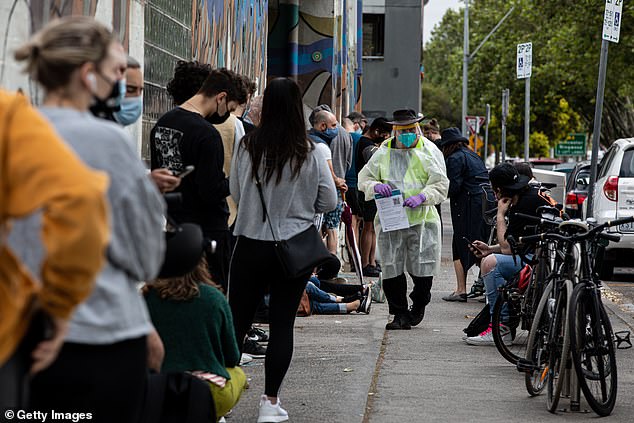 Mr Morrison said only 1 in 1,000 travellers were returning positive tests, compared to 20 in 1,000 close contacts who were waiting up to three days for results. Pictured: Testing in Melbourne

Doherty Institute modelling prepared for the meeting claimed Australia could record 200,000 cases a day by the end of January without extra restrictions like indoor mask wearing and density limits in pubs and bars.

The ‘worst-case’ modelling predicted there would be 4,000 hospitalisations a day based on the ‘conservative assumption’ that Omicron is just as severe as Delta, even though evidence to date shows it is milder – but the outbreak would be controlled by March with booster shots.

This would lead to between 8,000 and 10,000 patients in ICUs over the course of the wave, based on modelling of how many would get sick enough to need it – even with Covid booster rollouts in full swing.

‘I don’t know where they’ve come up with this modelling but it’s not based on any real world data,’ he told Daily Mail Australia.

Health Minister Greg Hunt announced on Wednesday the US Novavax vaccine should be available in January, and it could be the one to convince the vaccine hesitant to roll up their sleeves for a jab.

The Novavax shot, which has just been approved by the European Union, is a traditional protein-based vaccine, different from mRNA vaccines such Pfizer and Moderna or the AstraZeneca vaccine which uses an adenovirus vector.

Among the vaccine hesitant, Novavax is sometimes considered safer because the technology has been used for longer. It is delivered by two doses, three weeks apart. The company is confident of its efficacy against the Omicron strain of Covid-19.

Mr Morrison on Wednesday morning called the modelling a ‘worst-case scenario’ and called for calm.

He said it ‘assumes that nobody does anything, nobody gets boosters… no one exercises common sense.

‘We know, we saw similar numbers at the start of the Covid pandemic, which were never realised. So the Chief Medical Officer and I just want to assure people that those sort of numbers aren’t what we’re expecting. They are extreme case scenarios,’ he told Seven News.

Before the meeting chief medical officer Paul Kelly told premiers masks should be mandated in all indoor settings including retail, hospitality when not eating or drinking, and entertainment facilities.

Mr Morrison railed against government diktats, saying: ‘We have to move from a culture of mandates to a culture of responsibility.’

This prompted Labor’s health spokesman Mark Butler to accuse him of a ‘dangerous’ departure from the health advice.

But he said he would ‘tailor’ his state’s response based on ‘facts not fear’.

Masks are compulsory for retail shopping in Victoria and Queensland while South Australia, Tasmania and the ACT mandate masks indoors.

In Queensland masks will become compulsory for hospitality workers from 5am on Thursday.

The Northern Territory said it was considering its mask rules while Western Australia, which has no cases due to its hard border, only requires masks at airports.

The ACT, which recorded 16 new cases on Tuesday, took an extra step and limited aged care residents to five visitors a day.

There is no suggestion of lockdowns other than in the Northern Territory where shutdowns in Tennant Creek and Ali Curung were extended on Tuesday due to an outbreak amid fears for vulnerable Aboriginal residents.

Fortunately for Christmas travellers, there is little sign of any imminent border closures, with Covid already in every state except WA which is already effectively sealed off.

NSW and Victoria pressured Queensland to remove its entry testing requirement after testing centres were swamped with travellers queuing for hours and preventing ill people from getting a swab.

But Premier Annastacia Palaszczuk refused to review the situation until the New Year, insisting that only 10 per cent of people getting tested in NSW were travelling to Queensland.

Also facing huge testing delays, South Australia on Tuesday removed its requirement for an arrival test for travellers who tested negative 72 hours before their trip. 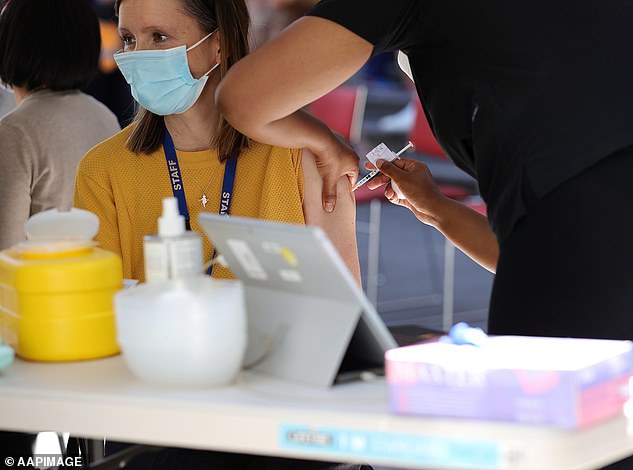 The vaccine advisory group ATAGI has already cut the timeframe between second and third jabs from six to five months.

Governments in NSW and Victoria are pushing for a cut for four months, and so is the AMA, but Mr Morrison said he would not change the rule unless the experts recommended it.

‘What I will not do is front run their advice on that issue. They will consider these issues carefully, and they will advise the government,’ he said.

There are 3.2 million Australians eligible for a booster shot but only 1.5 million have taken up the offer so far.

Many reported being unable to secure appointments at GPs and pharmacies, with wait times of up to a month.

There is no supply shortage with latest Commonwealth figures showing there are 4.8 million Pfizer and Moderna doses in fridges at GPs and pharmacies and another 13 million doses in federal warehouses.

But the pharmacies and GPs are struggling to keep pace with demand after states wound down their vaccine hubs.

There are 699 active state vaccine hubs across the nation, down from 957 in November.

‘We urge the states and territories to reopen the state vaccination clinics that have been wound down, more than 200 of them over the last couple of months,’ he said.

On Wednesday there were 875 people in hospital with Covid in Australia, compared to a peak of 1,541 on September 21.

Australia’s vaccine rate for over 16s sits at 90.6 per cent.

The Doherty Institute, which drafted Australia’s long road out of lockdown, prepared a report for national cabinet outlining its alarming data and urging all states to reintroduce face mask mandates and restrictions of gatherings.

‘I don’t know where they’ve come up with this modelling but it’s not based on any real world data,’ he said.

The Doherty Institute claims without low-to-medium restrictions, including limits on visitors and density in pubs, cafes and restaurants, the country could face millions of Covid cases within weeks.

As a part of the predicted 200,000 cases a day, researchers predicted hospitalisations could hit 4,000 a day – putting a heavy strain on the medical system.

This would lead to between 8,000 and 10,000 patients in ICUs over the course of the wave, based on modelling of how many would get sick enough to need it – even with Covid booster rollouts in full swing.

If the dire prediction is accurate, Australia would have four times the number of cases as Britain did in its horror summer when infections peaked at about 45,000 cases a day.

‘They’ve got twice the population of us and far less vaccination. So I just find that figure unbelievable and not realistic,’ Professor Collignon said.

‘We haven’t seen this in South Africa or anywhere else in the world.’

Professor Collignon also explained why the potential reintroduction of mask mandates may not have much of an impact on containing the spread.

‘Face masks might decrease your risks by about 10 per cent but over the medium to long term it won’t really make a lot of difference, particularly in summer when people won’t use them properly. That’s the reality of it,’ he said.

The Doherty Institute’s data based off current restrictions, which include no lockdowns, no retail restrictions, and open schools.

It assumes Omicron has the same severity of disease as Delta, something that has yet to be proven with many experts of the belief it is a more infectious but milder variant.

Doherty Institute modelling has not proved accurate throughout the pandemic and is criticised for flawed methodology and small timeframes that don’t account for full pictures.