Covid cases across Australia have plunged as vaccination rates continue to rise, with Victoria recording its fewest infections since September.

Victoria’s caseload has eased with 905 new local infections recorded on Sunday – more than 300 fewer than reported on Saturday.

Numbers also continued to fall in NSW, with 195 people testing positive in the 24 hours to 8pm on Saturday – 55 fewer than the day before.

One NSW resident died after testing positive to Covid the latest reporting period, while there were four more virus-related deaths in Victoria.

The NSW fatality comes after the state reported no new coronavirus deaths on Saturday for the first time in almost three months.

Some 224 people remain in NSW hospitals, four fewer than the day before, with 32 in intensive care.

Meanwhile, Victoria continues to manage more than 17,300 active cases, with 394  patients in hospital, 75 of them in intensive care and 46 requiring ventilation.

Sunday’s case number marks the first time Victoria’s daily count has been below 1,000 in two months.

The rapid decline in infections comes as vaccination rates climb across the nation, with both states charging past major jab targets.

Victoria is now 87 per cent double vaccinated for everyone aged 12 and over, while 91 per cent of NSW residents over 16 are fully-vaccinated.

The northern state is now charging towards the 95 per cent milestone, with 94.2 per cent of adults having had their first jab.

Now critical milestones have been hit, health authorities are urging those who are eligible to get a booster shot to maintain community protection.

NSW Health’s Dr Jeremy McAnulty says now the state has passed the 90 per cent double-dose vaccination milestone, it is important for anyone aged 18 and over who has been vaccinated for six months to seek out a third jab. 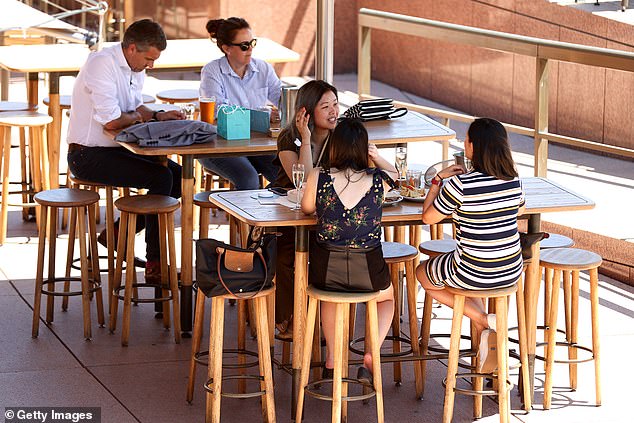 There were 195 new local Covid cases recorded in NSW in the 24 hours to 8pm on Saturday – 55 fewer than the day before. Pictured: People dine outdoors at Opera House Bar, in Sydney’s CBD, on October 18 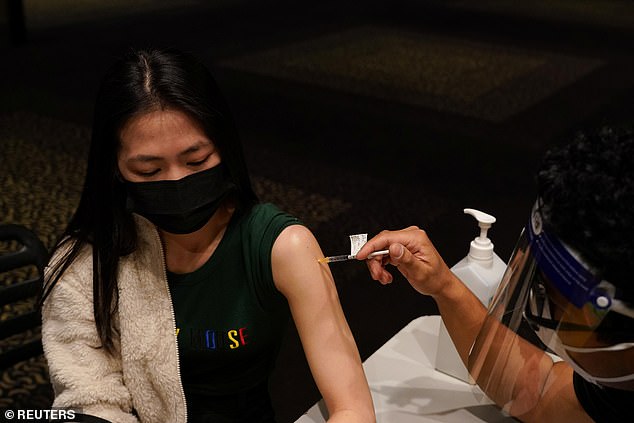 91 per cent of NSW residents over 16 are fully-vaccinated and 94.2 per cent of adults have had their first jab. Pictured: A woman receives a Covid vaccine at a Sydney vaccination hub in August

‘While the risk of infection and disease is much higher in unvaccinated people, we do sometimes see outbreaks occurring among vaccinated people particularly in indoor settings like gyms, bars and pubs,’ Dr McAnulty said on Saturday.

‘Early testing, if you have the symptoms, is really critical.’

Changes to how exposure sites are managed will also come into play from next week as NSW continues to quash its Covid outbreak.

From Monday NSW Health will no longer list case locations that a Covid-19 positive person has attended and elective surgery will begin to return to full capacity in Sydney.

Meanwhile, thousands of people gathered in Melbourne’s CBD on Saturday to rally against government mandates on emergency powers and vaccines.

Protesters blocked tram lines as they marched from the state library to parliament. One man was seen carrying a homemade gallows with three nooses but there were no instances of unrest.

‘We are being governed by medical bureaucrats that are part of a mad, insane cult of vaccinists,’ he told the crowd.

Victoria’s deadline for construction workers to be fully vaccinated to continue working on site fell on Saturday.

The controversial edict, which sparked violent protests across Melbourne in September, requires all tradies to have had two vaccine doses. 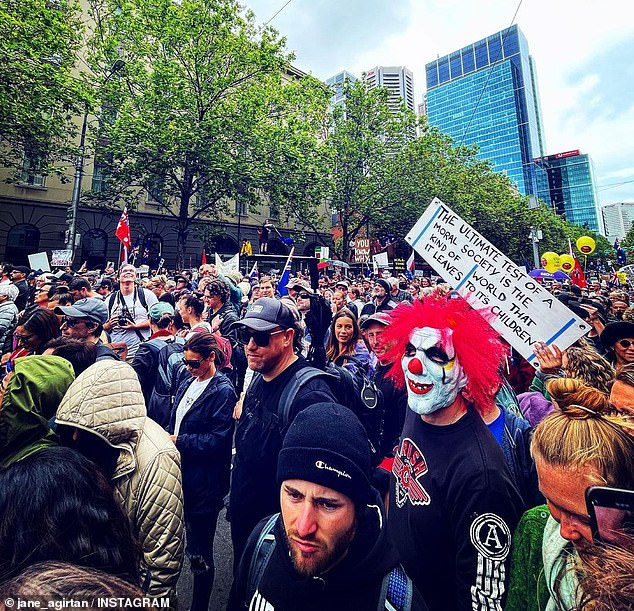 ‘Pro-choice’ protestors, including one in a horror movie mask, flooded Melbourne streets displaying protest banners and even a fake gallows to protest the Andrews government on Saturday

The state’s aged care workers need to be fully vaccinated by Monday and about one million of the state’s essential workers in total will be required to be double-jabbed by November 26.

Liberal upper house leader David Davis has called the premier’s pandemic legislation a ‘grab for power’ but urged those who took part in Saturday’s rally not to resort to violence.

‘I would encourage Victorians to fight on every level against Daniel Andrews’ terrible pandemic bill … but they should make their views known in a peaceful and calm and sensible way,’ he said.

The opposition has called for an early end to the state’s indoor mask mandate in a bid to encourage workers back to central Melbourne.

Under the current rules, people aged over 12 must be masked indoors unless at home.

The restriction is set to lift when the state reaches 90 per cent double vaccination on or about November 24, with the exception of public transport and high risk locations.