Qantas confirms 2021 travel dates to US, UK, Singapore, Japan, Fiji – so when will YOU be able to jet off overseas?

Qantas has officially confirmed Australians can pack their bags for an overseas holiday from December 18.

The country’s flagship airline has provided the exact date holiday-hungry residents can book flights to popular destinations like the US, UK, Canada and Singapore.

Biosecurity laws banning outbound travel without an exception will end on December 17 – the day before flights resume.

Qantas has scheduled flights to London, Los Angeles, Vancouver and Singapore to commence from December 18 a spokesperson revealed to Yahoo Finance.

Qantas has officially confirmed Australians can pack their bags for an overseas holiday from December 18 (pictured, a tourist in Canada) 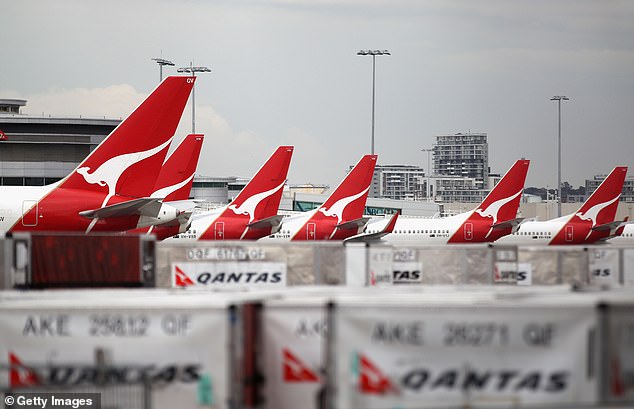 The country’s flagship airline (pictured) has provided the exact date holiday-hungry residents can book flights to popular destinations like the US, UK, Canada and Singapore

Australians will additionally be able to pack their bags for a highly-anticipated holiday to Tokyo and Fiji from December 19.

The announcement will come as welcome news to holiday-starved Australians who were told last month by Qantas boss Alan Joyce he expected flights to a few selected cities to resume in mid-December.

Last week, the airline announced its plans to gradually bring back overseas flights once 80 per cent of the over 16s are fully vaccinated against Covid-19 in accordance with the national plan.

Qantas said it expected the country to reach that target in December – triggering the re-opening of international borders as part of ‘Phase C’ of the federal government’s path to pandemic normality.

The airline said flights to cities in Asia and South Africa with low vaccination rates and high Covid-19 case numbers would not restart until at least April 2022.

Qantas said it also plans to restart flights between Australia and New Zealand from mid-December 2021 as long as the trans-Tasman bubble had re-opened by that date.

The airline has predicted Victoria will be the first state to open its borders to NSW from early December, while hardline Western Australia will be the last.

It comes after Flight Centre chief executive Graham Turner optimistically predicted the first flight out of Australia would be destined for London in mid-November.

Australia is considered a ‘green list’ country by the United Kingdom, meaning visitors do not have to quarantine on arrival.

Instead, tourists are required to have been Covid-tested in the three days before arriving in Britain and again on their second day in the country.

Mr Turner also correctly predicted Australians could pack their bags for a trip to mainland Europe, Fiji, Canada and the United States before Christmas time.

Where will you be able to jet off overseas this December?