Victoria Police have been slammed on social media for a breathtaking swoop to check on a coffee-drinker’s cup in Melbourne.

The man – unseen in the eight second video but believed to be unmasked – was drinking a takeaway coffee in a Melbourne park when police approached him.

One asked him if he could inspect the cup to ensure there was coffee in it, shook it to confirm there was, then returned the paper cup back to him.

‘Would you mind if I check if there’s actually anything in that?’ said the officer as he grabbed the cup.

Victoria Police have been slammed on social media for a breathtaking swoop to check on a coffee-drinker’s cup in Melbourne, as seen here

As he backed off after confirming the cup still had coffee in it, the officer sheepishly told the man: ‘Enjoy your coffee.’

‘Jesus loves you all, god bless’ says the man targeted by police as they walk off. He adds: ‘I’ll be praying for you all.’

Victorians are not required to wear a mask in public if eating or drinking takeaway coffee or food.

The clip sparked outrage on Twitter, with many comparing it to totalitarian states like North Korea, with pictures of Kim Jong Un and Hitler posted in reply. 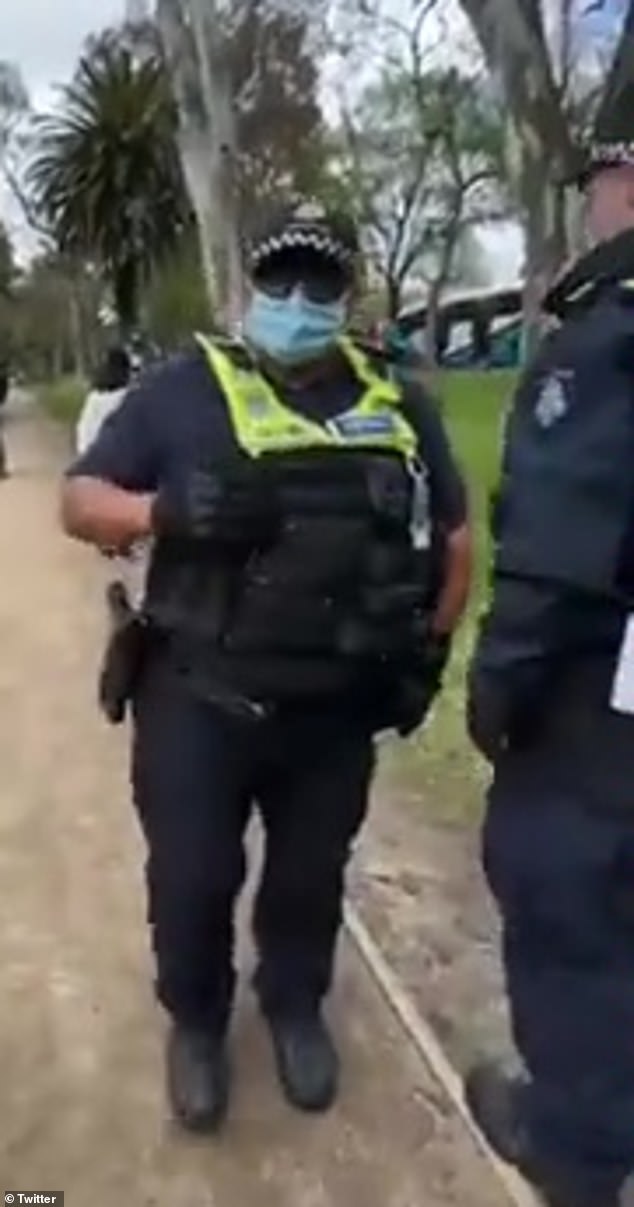 The man – unseen in the eight second video but believed to be unmasked – was drinking a takeaway coffee in a Melbourne park when police approached him, as seen here

‘Australian government went full tyrant,’ said one, while another added: ‘Pathetic… VicPol are the most hated crime gang in the country now!’

‘They were all standing around like a council worker leaning on his shovel, waiting for smoko,’ posted another. ‘Innocent passersby suffered the brunt of their bored frustration. Poor grunt, no heads to bash, they were made to look stupid.’

Others were concerned the police officer – who was wearing gloves – could have potentially contaminated the cup by touching it before returning it.

‘Why wasn’t the officer forced to change his gloves to touch another person’s property? He could easily spread Covid,’ said one.

‘If that police officer unknowingly had covid he would absolutely spread it. It is completely irresponsible (and against all infection control) to behave that way.’