Covid now mainly disease of elderly: NIne in 10 deaths are over-65

A record nine in ten Covid deaths in the US are now among the elderly, official data shows — as the disease now firmly becomes an illness of old age.

Like with most viruses, older people have been more vulnerable to Covid throughout the pandemic, but in recent months fatalities have been skewed further towards the over-65s, reaching a record 92 per cent of all Covid deaths a fortnight ago.

Researchers are not clear on what may be behind this trend, although uptake of the bivalent vaccine has been low with just a quarter of elderly people getting the shots.

About 100 Americans are still dying from Covid every day, which is well below the peak of nearly 4,000 deaths a day in 2020, but some experts say this is still too high.

Some doctors are already warning that the next Covid variant could mutate to become deadlier.

The above graph shows the proportion of Covid deaths in over-65s (red line) and those aged 64 years and younger (green line). While the elderly have always made up the bulk of Covid deaths, their proportion has now risen to record levels 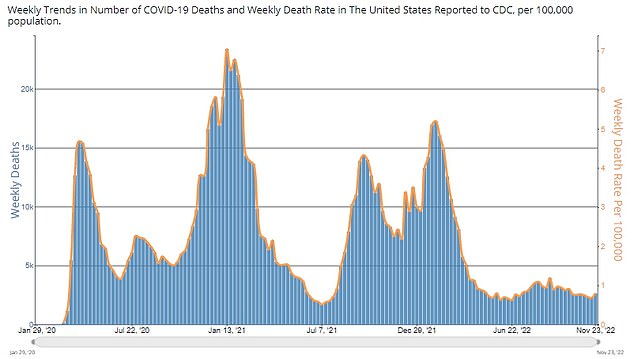 The above graph shows the number of Covid deaths being reported in the US. About 100 are now recorded every day, far below the peak of nearly 4,000 early in the pandemic 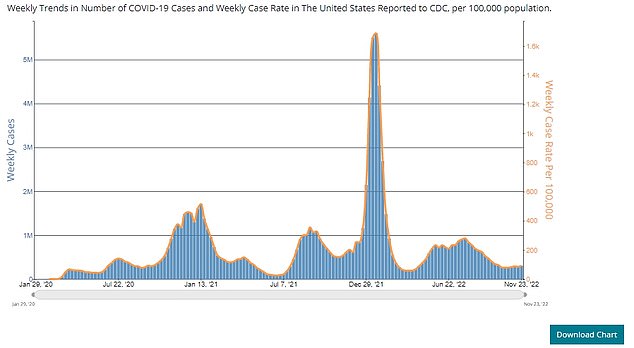 This graph shows the number of Covid cases being reported. About 305,000 are now being reported weekly, although this is likely an underestimate because of little testing

The fact that deaths are skewed towards the elderly may raise awkward questions about shielding policies — which forced millions to stay at home.

In 2020, a group of scientists called for a targeted approach that would see the elderly placed in lockdown but the young able to go about their lives.

At the time it was heavily criticized by mainstream scientists including Dr Anthony Fauci and former NIH director Dr Francis Collins as fringe.

Centers for Disease Control and Prevention (CDC) data shows there were 808 weekly Covid deaths in the middle of November, of which 744 were among over-65s.

The proportion of deaths among older adults has trended upwards since December last year, reaching eight in ten in April.

Next major Covid variant WILL be more deadly, doctors warn

The world’s next major Covid variant is poised to be more severe than the mild strains that are currently world-dominant, according to a new study.

The ultra-infectious Omicron strain emerged almost exactly a year ago and its mutated spinoffs have risen to the top in virtually every country in the world.

They are far milder than the older versions of the virus and many researchers believed they represented a kind of end game for Covid’s evolution, which like many viruses before it, mutate to be more mild so they can spread more easily.

But researchers in South Africa say the virus still has the potential to get deadlier after examining an immunocompromised HIV patient who harbored the virus for half a year.

Over time, the virus evolved to cause more cell death and cell fusion, leading to increased inflammation in the lungs. These effects more closely resembled those of the ancestral Covid strain than the Omicron strain, according to Professor Alex Sigal, the virologist who led the study.

The patient studied is one of the longest known sufferers of Omicron, which itself is widely believed to have evolved in someone with a severely weakened immune system.

At the same time, however, the number of Covid fatalities has trended downwards since this summer.

There were about 3,000 a week in July, whereas now there are less than 1,000 — although data for the latest week is still being collected.

While Covid is yet to really take off this winter, experts are worried about  ‘tripledemic’, with flu and RSV already causing record numbers of hospitalizations for this time of year.

CDC data shows there have been about 6.2million flu cases and 2,900 fatalities due to this disease since October.

For comparison, Covid has accounted for 2.2million confirmed cases and 14,000 deaths in that time. It is likely that the Covid cases are higher, but reduced testing means many are going undiagnosed.

About 100,000 RSV cases have also been detected since October, but this is likely an underestimated due to a lack of testing. The virus is behind about 14,000 fatalities every year.

Concerns had been raised over Covid deaths rising among younger people after a Harvard University analysis found the average age of fatalities fell from 78 years in 2020 to 69 years in 2021.

But scientists suggested this drop was likely down to more older adults dying earlier in the pandemic.

They also said it may be down to a higher likelihood of getting vaccinated and adhering to Covid restrictions in older groups.

CDC data shows that while more than 95 per cent of over-65s got the initial two-dose Covid vaccines.

But this rate has fallen to less than a quarter for the new Omicron-specific bivalent jabs.

Covid is expected to be the third leading cause of death this year, with about 150,000 to 175,000 fatalities reports the Washington Post.

For comparison, in the first year of the pandemic it triggered some 500,000 fatalities.

Illnesses behind more deaths are likely to be both cancer and heart disease, at 600,000.

Researchers suggest more deaths may be occurring in the elderly due to the slower vaccination drive.

Some experts argue that Covid deaths remain too high.

Dr Matthew Liao, a bioethics expert at New York University, said: ‘There’s a bit of ageism, so to speak, attached to it.

‘People, even if they are older, they still have as much claim to live as me.’

CDC Director Dr Rochelle Walensky also previously said at a news briefing: ‘We can now prevent almost all of the deaths that are happening.’

But Joe Biden has previously declared the Covid pandemic over, and virtually all restrictions have been dropped nationwide.