Poor eyesight in kids was already becoming more common before the pandemic, but COVID-19 made things worse, eye doctors say.

Increased screen time combined with less playing outside is the perfect combination to ramp up cases of myopia, or nearsightedness.

In one study, researchers in China found that the rate of nearsightedness became three times higher in 2020 for kids ages six to eight, compared with the previous five years.

The younger a child develops this condition, the worse their eye problems will become later in life.

To combat this condition, ophthalmologists and optometrists suggest that children spend more time outdoors, take breaks between looking at screens, and – if needed – use special contact lenses or eye drops.

Thanks to lockdowns and virtual school, millions of kids across America are spending much more time inside than they did before 2020 – and much more time looking at screens. Some students have been learning online for more than a year.

Studies have shown that online learning causes many kids to fall behind in their classes. Many students have also faced increased stress, depression, and other mental health conditions.

But that’s not all. Recent research suggests that online learning may also be worsening kids’ eyesight at a massive scale.

Myopia, or nearsightedness, was already a problem before the COVID pandemic hit.

Half the world’s population may suffer from this condition by 2050, according to 2016 research by the Brien Holden Vision Institute in Australia.

For children around the world, the pandemic may have accelerated this trend.

One leading theory suggests that, when a child looks at a screen for an extended period of time, their eye will adjust to focus on closer objects instead of those farther away. This adjustment can change the eye’s overall shape, leading to nearsightedness, explains Wall Street Journal reporter Sumathi Reddy.

Also bad for kids’ eyes: spending less time outside. Natural light and physical activity can help eye development, while staying inside does the opposite.

In one study – published in January in the journal JAMA Ophthalmology  – researchers in China compared nearsightedness rates in children from 2015 to 2020. The study involved over 120,000 children, all kept at home during China’s national lockdowns.

The team found that the number of nearsighted kids between ages six and eight increased up to three times in 2020, compared to the previous five years. 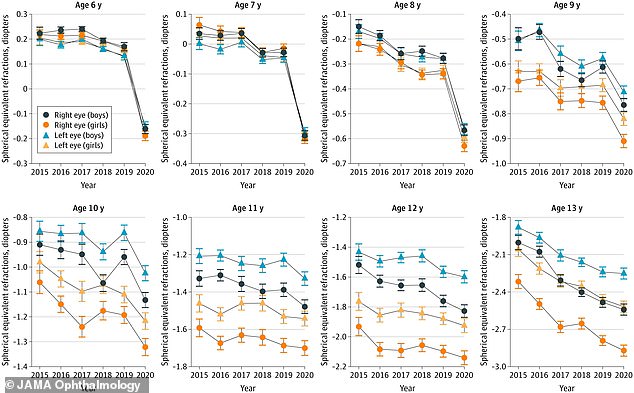 School-aged children kept at home during China’s lockdowns were likely to develop myopia, or nearsightedness. This trend was especially pronounced in younger children, ages 6 to 8

Older children didn’t experience such a sharp deterioration in their eyesight, but a change was still noticeable.

The researchers suggest this is because younger children might be more sensitive to their environments than older children.

That finding worries other eye experts. The younger a child develops myopia, the more likely they are to have worse eye problems later on in life.

Children and adults with a particularly severe level of nearsightedness, known as high myopia, are at risk of developing other, worse conditions – like cataracts and glaucoma.

The U.S. has not yet seen a study on children’s eyesight that’s comparable to the 120,000-patient study in China. But American eye doctors are seeing more kids come in for appointments.

In one study described by the Wall Street Journal, a survey of 110 kids ages 10 to 17 found that the majority developed ‘acute eye symptoms’ in 2020 – even though they’d had no eyesight problems before doing online school.

These symptoms included eye aches, headaches, blurry vision, and losing one’s place while reading. The study is still undergoing review and isn’t yet published, but it speaks to larger trends.

‘I think everyone is aware that the COVID pandemic also contributed to the myopia pandemic,’ Dr Jeffrey Cooper, a professor at the State University of New York College of Optometry, told Medscape. 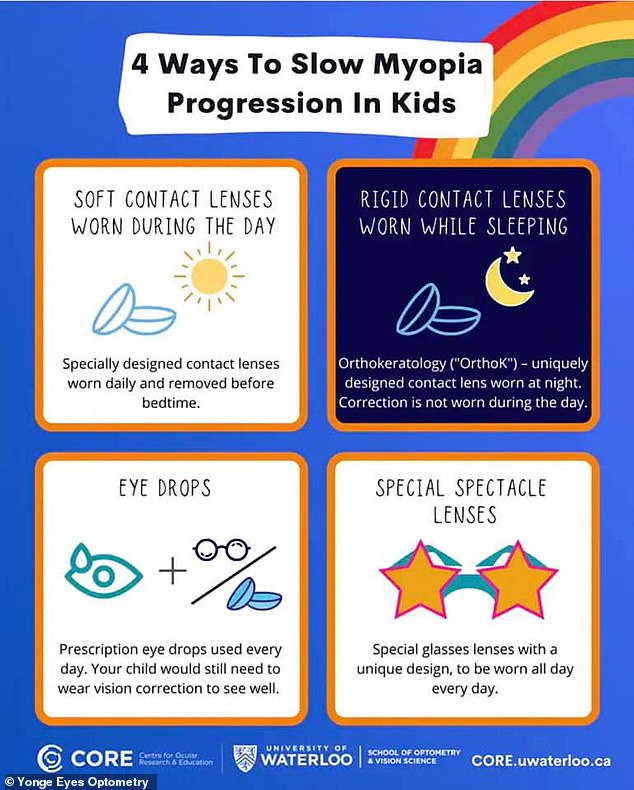 Kids can prevent this condition by spending more time outside, taking breaks between looking at the screen, and even blinking more

Parents looking to help conserve their kids’ eyesight can encourage them to spend more time outside.

One eye doctor interviewed by the Journal recommends a 20/20/20 rule: ‘take a 20 second break for every 20 minutes of screen time by looking 20 feet away.’

Blinking more, as simple as it may sound, can also help. Some research suggests that people blink at half their normal rate when staring at a screen – consciously blinking more can help prevent eyes from getting strained or dried out.

If a child’s eyes are in particularly bad shape, an eye doctor may prescribe special contact lenses or dilating drops.

While the deterioration in kids’ eyesight over the past year may be worrying, for those children who aren’t nearsighted yet, there may be hope.

Some eye damage could be reversible if kids are able to spend a lot of time outside this summer – getting off of their screens and back to more normal life.