About seven in 10 Brits are in favour of location-tracking technology during the coronavirus pandemic – regardless of if it’s opt-in or compulsory, a study suggests.

UK researchers conducted surveys of more than 3,500 British adults last spring, during the grips of the virus’s first wave, on their willingness to use such tech.

70 per cent were in favour of having their location tracked via opt-in apps on their smartphone to help authorities identify if they’ve been exposed to people with Covid-19.

This figure declined only marginally – to 65 per cent, or nearly two-thirds – if this app was compulsory and enforced by the government with fines and arrests.

The findings suggest Britons are either coming to accept of privacy-encroaching technology or are just willing to allow exceptions to get out of lockdown as soon as possible.

Meanwhile, more than 60 per cent of respondents were in favour of having an ‘immunity passport’ – a form of documentation indicating that its owner has SARS-CoV-2 antibodies, suggesting they’re immune to the virus.

The NHS Test and Trace app, a decentralised tool relying on Google/Apple Bluetooth technology, was introduced in September 2020. This study suggests the UK public supports usage of tracking technology and immunity passports in the current global pandemic

While the study suggests the public supports tracking tech, the findings are not reflected in the number of people who have downloaded the NHS Test and Trace app, prompting calls for this issue to be addressed.

‘Attitudes were surprisingly permissive and this is good news for public health,’ said study lead author Professor Stephan Lewandowsky, chair in cognitive psychology at the University of Bristol.

‘But there appears to be a significant gap between what people say they’re willing to do and what they actually do, which needs further investigation.’

Lack of uptake is a big problem because such systems need more than half – 56 per cent – of the general population on board to be effective in helping control a pandemic, Professor Lewandowsky said.

The NHS Test and Trace app, a decentralised tool relying on Google and Apple Bluetooth technology, was introduced in September 2020 following months of delay and questions about its effectiveness.

The app for iOS and Android asks users to log whether or not they symptoms and uses Bluetooth to keep track of other phones it has come into contact with.

As of the end of last month, nearly 21 million people in the UK had downloaded the NHS Test and Trace app, which is more than 10 million below target for it to work properly. 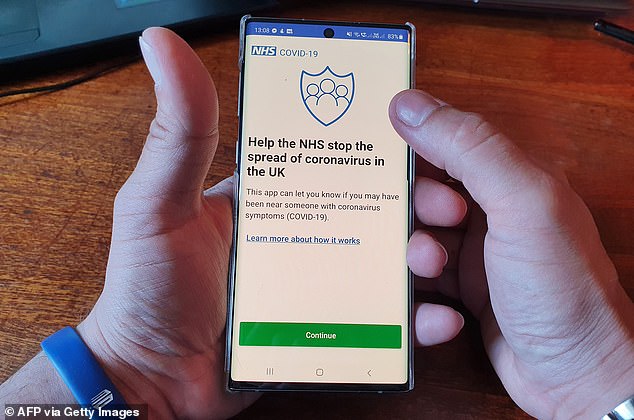 ‘There could be many reasons for this, which could be technological barriers, confusion, or simply lack of awareness,’ said Professor Lewandowsky.

‘But the fact respondents were very receptive and open to such tools should be encouraging and indicates while people don’t want to throw away their privacy, they are willing to make compromises perhaps for the greater good.’

Both surveys presented two scenarios. Firstly, the ‘mild’ scenario – using an app featuring smartphone tracking data to identify and contact those who may have been exposed to people with Covid-19, which people can choose to download.

The second scenario (‘severe’) proposed this app was compulsory for all mobile phone users and enabled the government to use the data to locate anyone violating lockdown orders and enforce them with fines and arrests.

Amazingly, in both surveys, the levels of acceptance for each scenario were broadly the same.

Around 70 per cent of respondents accepted the opt-in app and almost two thirds, some 65 per cent overall, accepted the mandatory version with tighter enforcement.

When a hypothetical clause was introduced, resulting in all data being deleted after two weeks, acceptance levels of both scenarios rose to more than 75 per cent.

Acceptance increased further still to more than 85 per cent when, on top of this two-week time limit, another modification was made to both scenarios.

This second modification differed between scenarios – if the data were stored locally rather than on a government server (for the ‘mild’ scenario) or if users could opt out of data collection (for the ‘severe’ scenario).

This modification to the severe scenario would have meant the app was no longer compulsory for all mobile phone users, but it still enabled government to use data to penalise anyone violating lockdown.

‘Such high levels of acceptance were quite unexpected but welcome,’ said Professor Lewandowsky.

‘It would be concerning if people didn’t care at all about their privacy, but the fact they indicated even greater acceptance with additional measures to preserve it is reassuring and suggests careful consideration before being willing to surrender it.’ 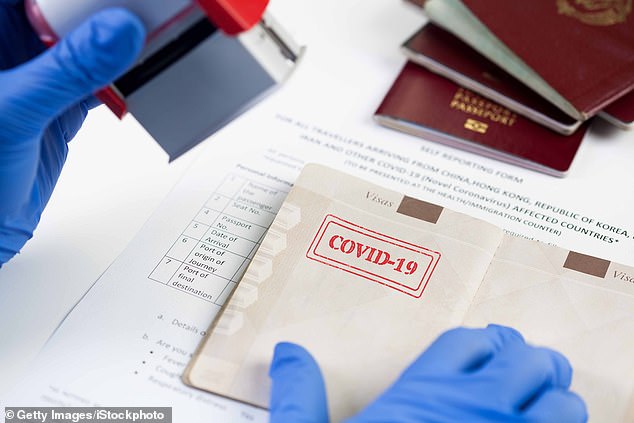 A number of governments, including those of the UK, the US, Germany and Italy have suggested using immunity passports as a way to return to some level of normality following the pandemic (stock image)

Some governments have suggested that the detection of antibodies to the SARS-CoV-2, the virus that causes Covid-19, could serve as the basis for an ‘immunity passport’ or ‘risk-free certificate’.

This documentation, digital or physical, would enable individuals to travel or to return to work assuming that they are protected against re-infection.

UK Minister for Business & Industry and COVID Vaccine Deployment Nadhim Zahawi said in November that ministers were looking at immunity passports on the NHS as a way to prove people had been vaccinated.

However, there is currently no evidence that people who have recovered from Covid-19 and have antibodies are protected from a second infection, according to the World Health Organisation.

The second survey also explored attitudes towards so-called immunity passports, which could be issued to people who carry Covid-19 antibodies as an indication they are immune to the virus and unable to spread it.

Resistance to the idea was relatively low and more than 60 per cent of respondents wanted one for themselves.

‘Only 20 per cent of people strongly opposed the idea, mainly on grounds of fairness, which was surprisingly low,’ said Professor Lewandowsky.

‘It’s fascinating how people seem increasingly receptive to their personal data being used to inform themselves and others about what they can and can’t do.’

Limitations to the study include the fact the survey data was gathered the best part of a year ago, meaning attitudes to tracing tech may have changed along with the developments in the pandemic.

As a follow-up study, it would be beneficial to know whether people have relaxed their privacy attitudes as an exception due to the emergency situation, Professor Lewandowsky suggests.

Alternatively, there could be a wider acceptance of ‘privacy-encroaching technologies’ whether or not they’re Covid-related, such as continuous monitoring of power consumption at home or tracking of location by law enforcement authorities.

The research forms part of an international project with similar surveys being conducted in countries across the world, including Australia, the US, Taiwan, Japan, Switzerland, Germany, and Spain.

A continually-updating summary of the overall project is available online.

The study has been published in the journal PLOS ONE.

REVEALED: THE TRUTH ON COVID IMMUNITY, ANTIBODIES AND T CELLS

Antibodies are substances produced by the immune system which store memories of how to fight off a specific virus.

They come in different forms and may attack viruses and destroy them themselves, or may force the body to produce other kinds of immune cells and white blood cells to do the dirty work for them.

They can only be created if the body is exposed to the virus by getting infected for real, or through a vaccine or other type of specialist immune therapy.

Once antibodies have been created once – the body essentially moulds them around a virus when it encounters one in the blood – the body usually retains a memory of how to make them and which ones go with which virus.

Scientists are still unsure on the truth on immunity because Covid-19 has only been around since January – meaning its long-term effects are still unclear.

So far cases of people getting infected more than once have not been numerous nor convincing.

With some illnesses such as chickenpox, the body can remember exactly how to destroy it and becomes able to fend it off before symptoms start if it gets back into the body. But it is so far unclear how long Covid-19 patients are protected for.

Evidence is beginning to suggest that antibodies disappear in as little as eight weeks after infection with the coronavirus, scientifically called SARS-Cov-2.

However, antibodies are only one type of substance that can produce immunity. The immune system is a huge web of proteins that have different functions to protect the body against infection.

T cells — which can’t be detected by the ‘have you had it’ antibody tests — made in response to the infection may offer a form of immunity that lasts several times longer.

T cells are a type of white blood cell that are a key component of the immune system and help fight off disease.

Other scientific studies have shown people who have had a common cold in the past two years have T cells that show ‘cross-reactive protection’ against Covid-19.