Just over 35,000 Britons have tested positive for Covid since Friday and 400 deaths have been registered in the same time, official data shows.

A delay to the Government’s dashboard update on bank holiday Monday means today’s stats include four days’ worth of numbers – after ministers stopped publishing the figures on weekends following ‘Freedom Day’.

It shows there were 35,635 new positive Covid tests over the last four days, working out at an average of just 8,900 daily cases since Friday. There were also 407 total deaths, equivalent of just over 100 daily.

Case numbers logged by the central testing scheme are becoming increasingly unreliable now that free swabs have been stopped for the vast majority of Britons.

Meanwhile, latest Covid hospital data shows there were 1,198 new admissions for the virus on April 27, which marked a near-19 per cent decrease on the previous week.

Daily hospitalisations have now fallen for 22 days in a row — despite NHS leaders calling for masks and outdoor mixing to return just weeks ago.

Pressure is mounting on the UK to scrap its daily Covid stats after Ireland said it would discontinue its updates in the coming weeks.

Meanwhile, South Africa has once again become a focal point of the pandemic amid a fresh Covid surge of new subvariants.

Covid cases have nearly quadrupled in a month nationally and hospital admissions are ticking up in Gauteng province, the former epicentre of the original Omicron wave. 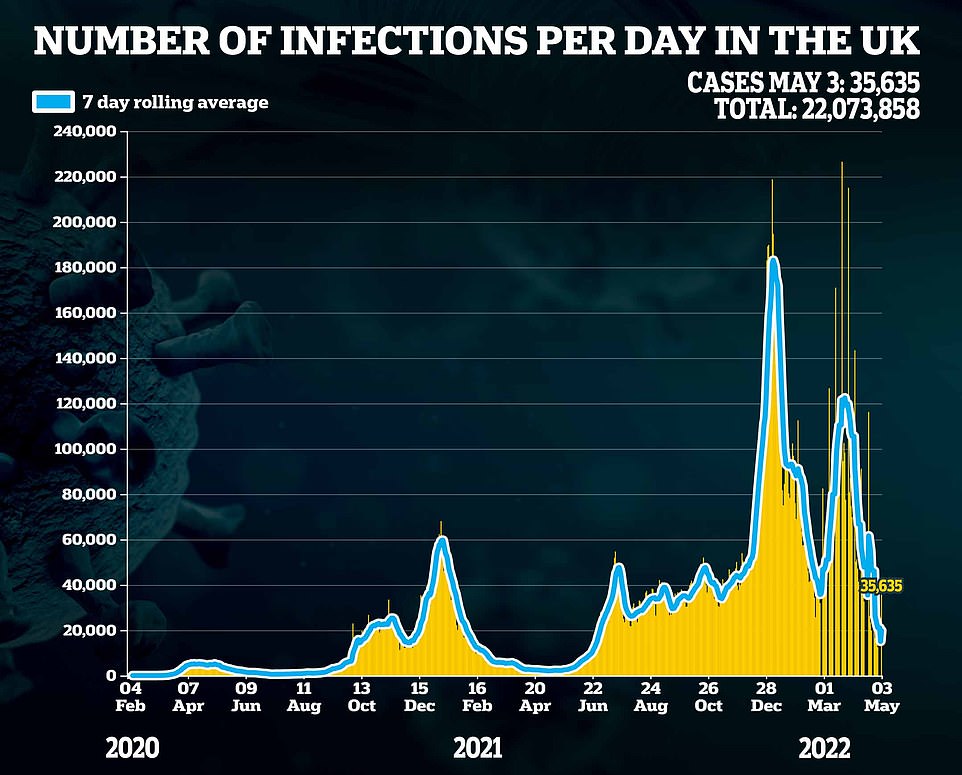 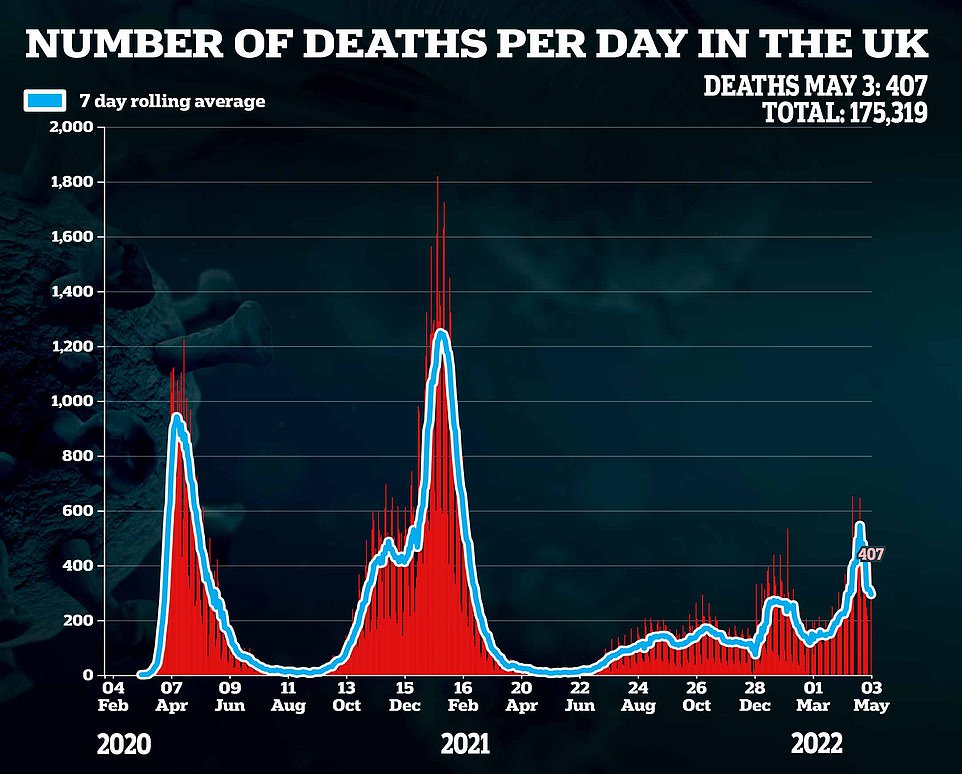 The world watched in horror last November as the super-infectious Omicron strain (BA.1) spread through South Africa at unprecedented speed — which turned out to be mild.

But now the country finds itself at the cusp of a fresh explosion in infections, this time due to sub-strains that appear even more transmissible and resistant to antibodies.

Researchers on the ground in South Africa say the BA.4 and BA.5 subvariants can evade immunity and cause symptoms in people who were infected with their parent strain just months ago.

What is still unclear is whether the new wave will create milder or more severe illness — but experts tell MailOnline the former is more likely, for the UK at least.

Professor Paul Hunter, an infectious disease expert at the University of East Anglia, said Britain’s second Omicron wave, triggered by the BA.2 subvariant, will have given Britons an extra layer of immunity against severe illness.

Being hospitalised with Covid could age your brain by two decades, a Government-funded study warned today.

Dozens of studies have found Covid damages brain function, the scientists claim this is first study of its kind to assess the impact.

Researchers tested the cognitive skills of 46 patients who were hospitalised with the virus in 2020. A third had been hooked up to ventilators.

They underwent a range of memory, attention and reasoning tests six months after their ordeal.

These test results were then compared against the scores done by 66,008 members of the general public, with 460 selected for direct comparison based on patient demographics.

Results showed the Covid survivors were on average less accurate and had slower response times than the public.

This, the authors said, was  a commonly reported problem among those experiencing ‘brain fog’ after recovering from Covid.

The results also showed patients who needed mechanical ventilation scored the worst in the tests indicating severity of illness was a driving factor in the cognitive decline.

The experts, also from Imperial College London, said the cognitive impairment was similar to that seen normally as people age from 50 to 70.

While the patients had shown some ‘gradual’ cognitive improvement 10 months after their illness, the authors said some may never fully recover their prior intelligence.

They also warned that millions who suffered a milder version of Covid could also be impacted, although to a lesser extent.

Neuroscientist Professor David Menon, study author, said while some of the patients had shown improvement over time, it was slow, and some may never recover their prior cognitive abilities.

He pointed to a pre-print which showed the combination of vaccination and Omicron infection created ‘robust protection’ against Omicron’s sub-lineages.

However, it is less clear how the latest wave will play out in South Africa, where only three in 10 South Africans have had two jabs and just one per cent have had a booster dose.

There has also been a lull in infections since the original Omicron wave collapsed in South Africa in January, whereas the UK’s case rates spiralled again over spring.

There are now nearly 4,800 new Covid infections per day in South Africa, on average, compared to around 1,300 this time last month.

Nationally there are about 1,400 weekly daily hospital admissions for the virus, broadly unchanged from a month ago, but it takes several weeks for any trend to play out.

In Gauteng province, home to Johannesburg, admissions have doubled in a month.

However, more than 90 per cent of South Africans are estimated to have natural immunity against Covid, which could limit the pressure on hospitals.

Professor Hunter told MailOnline he expects BA.4 and BA.5 to become dominant in the UK unless another completely new variant arises.

‘I suspect that unless something else comes along, one or both of these variants will become dominant in the UK but I can’t predict how big a surge of infections that would lead to,’ he said.

‘It is also likely that we will still have robust protection against severe disease for most of us.

‘Vaccines give good additional protection after a BA.1 infection so given the UK has a much higher vaccine uptake than South Africa, as well as having high prior infection rates, it is difficult to predict what that would mean for UK with certainty.’

Professor Christina Pagel, of University College London and part of a former Zero Covid campaign group, said a best case scenario would see a small BA.4/BA.5 wave in the UK.

At worst it could mean a wave as bad as the Omicron or BA.2 wave, which never overwhelmed the NHS, according to Professor Pagel, who is not normally known for optimistic Covid forecasts.

She told The Guardian that the UK was approaching summer, meaning more outdoor mixing and lower levels of transmission.

But there are naturally some intrigue about the latest rise in South Africa, given what happened last November when the country announced the Omicron variant to the world.

Last November it was recording fewer than 300 daily cases before the strain caused an astronomical surge, peaking at 27,000 daily cases within a month.

The situation in South Africa caused international panic, with countries across the world shutting their borders to travellers from swathes of Africa in early December.

But Omicron quickly spread around the world and caused unprecedented rises in cases.

Frightened that the surge could lead to a wave of hospitalisations, many leaders across Europe chose to lock down again — including the Netherlands and Austria and France.

In the UK, Britons were urged to cancel their Christmas parties and only see people if it was essential. That was despite doctors in South Africa strongly insisting that Omicron was milder than previous waves.

Experts told MailOnline at the time that there was an element of ‘snobbery’ among UK experts in ignoring the pleas of South African doctors.

Dr Simon Clarke, a microbiologist at the University of Reading, told MailOnline that people need to get out of the habit of fixating on ebbs and flows of the virus in other countries.

‘Over the coming months and years we’re going to see numbers of infections rise and fall around the world. It’s natural and nothing to be afraid of or shocked by,’ he said.

‘The important thing is to maintain sufficient immunity in population so that we keep a lid on Covid-19’s worst effects and some reduction in spread.

‘Having a good level of immunity derived from vaccines and previous infections means that hospitalisations are reduced and when they do occur, tend to be at the less serious end of the spectrum with fewer admissions to intensive care.’

Since the more transmissible but milder Omicron strains took off in the UK in December, Covid cases have soared to record levels, with 4.1million infections logged at the latest peak last month.

But, unlike in previous parts of the pandemic, surges in severe illness never followed. Deaths in England never breached 250 a day in April, similar to levels seen in bad flu seasons.

Hospital admissions peaked at just over 2,000 — half of the peak in January 2021 — and more than half were likely admitted for a different illness and tested positive incidentally.