Covid US: Cases surge 224% in last three weeks with ‘Delta’ variant making up 83% of new infections

The Indian ‘Delta’ Covid variant now makes up more than three-quarters of all new cases in the U.S. as infections continue to spike across the country.

In testimony before the Senate Health, Education, Labor and Pensions committee on Wednesday, Dr Rochelle Walensky, director of the Centers for Disease Control and Prevention (CDC), said the variant accounts for 83 percent of COVID-19 cases.

The figure is a considerable increase from the 50 percent of infections that were linked to the Delta variant two weeks ago.

Nearly every state – aside from Montana and Iowa – and the District of Columbia have seen infections rise in the last week, according to a DailyMail.com analysis of Johns Hopkins data.

Meanwhile, as cases increase, daily COVID-19 vaccinations continue to decline, with the seven-day rolling average falling below 500,000 per day from a high of 3.5 million in April.

The surge has been blamed on the spread of the Delta variant in states with low vaccination rates such as Arizona, Arkansas, Louisiana, Mississippi and Missouri. 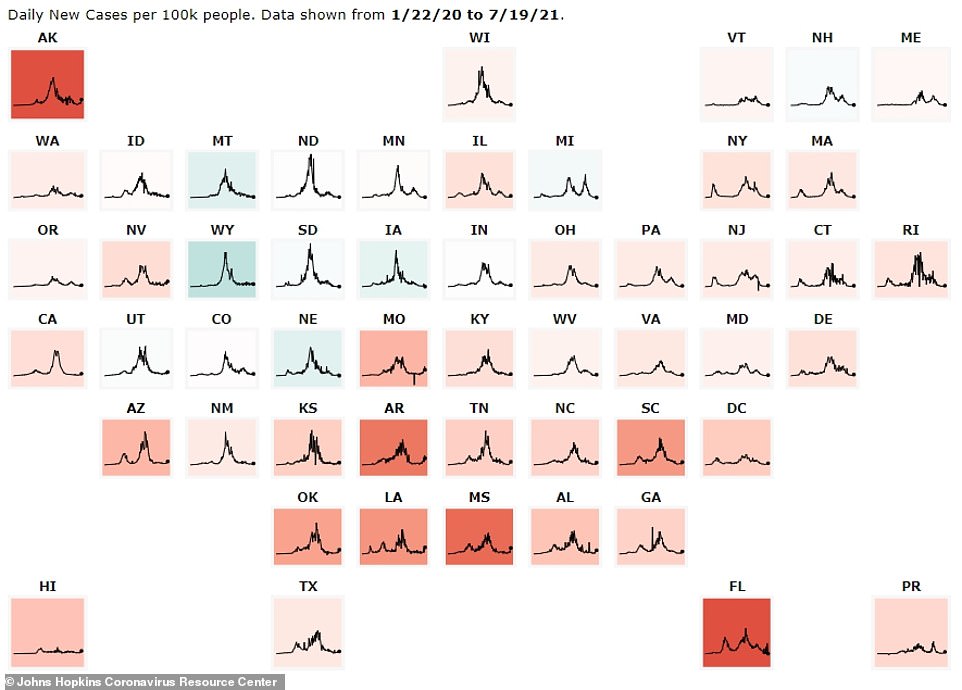 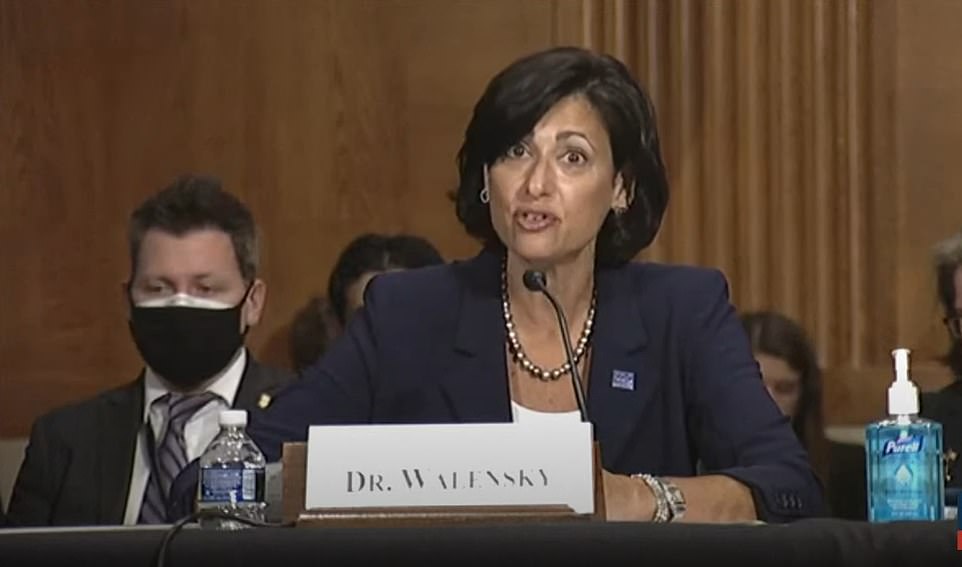 CDC director Dr Rochelle Walensky said on Tuesday during a Senate hearing (above) that the Indian ‘Delta’ variant is spreading, accounting for 83% of all new infections, up from 50% two weeks ago

The news about the spread of the Delta variant comes as the U.S. renewed the order that declares the COVID-19 pandemic a ‘public health emergency’ (PHE).

On Monday, the U.S. Department of Health and Human Services Secretary Xavier Becerra signed the ‘determination that a public health emergency exists’ which was last renewed in April.

There are several provisions, emergency orders and interim rules that are tied to the PHE declaration that cannot be carried out unless a renewal occurs.

It also allows all three COVID-19 vaccines available in the U.S. – Pfizer-BioNTech, Moderna and Johnson & Johnson – to be issued under emergency use authorization.

The renewal is effective as of Tuesday and will continue for 90 days, with plans to keep renewing the order through the end of 2021.

‘The PHE will likely remain in place for the entirety of 2021, and when a decision is made to terminate the declaration or let it expire, HHS will provide states with 60 days’ notice prior to termination,’ then-Acting HHS Secretary Norris Cochran wrote in a letter back in January 2021.

Missouri continues to be one of the nation’s COVID-19 epicenters with average cases rising by 60 percent from 1,107 per day to 1,782 per day in the last two weeks, according to DailyMail.com’s analysis.

The state’s vaccination rate is behind the national average with about 46 percent of residents having received at least one dose and 40 percent fully vaccinated.

Comparatively, 56.1 percent of the U.S. has received at least one dose and 48.6 percent are fully vaccinated.

The surge is due to the Delta variant, which has taken hold in the southwestern part of the state, where rates of at least one vaccine dose in some counties are as low as 15 percent.

In Greene County, where Springfield is located, the health department reported 251 COVID-19 patients in county hospitals on Monday, according to the St Louis Post-Dispatch.

This marks the first time that the figure has surpassed the record set last winter of 237 patients, which was reported on December 1.

Doctors say many of their patients are in their 20s, 30s and 40s in comparison with previous surges and nearly all are unvaccinated.

‘There’s so many COVID patients. They’re on so many different units,’ Dr Rachel Keech, who was recently deployed to Mercy Hospital Springfield to help treat patients, told the Post-Dispatch. ‘They’re everywhere.’ 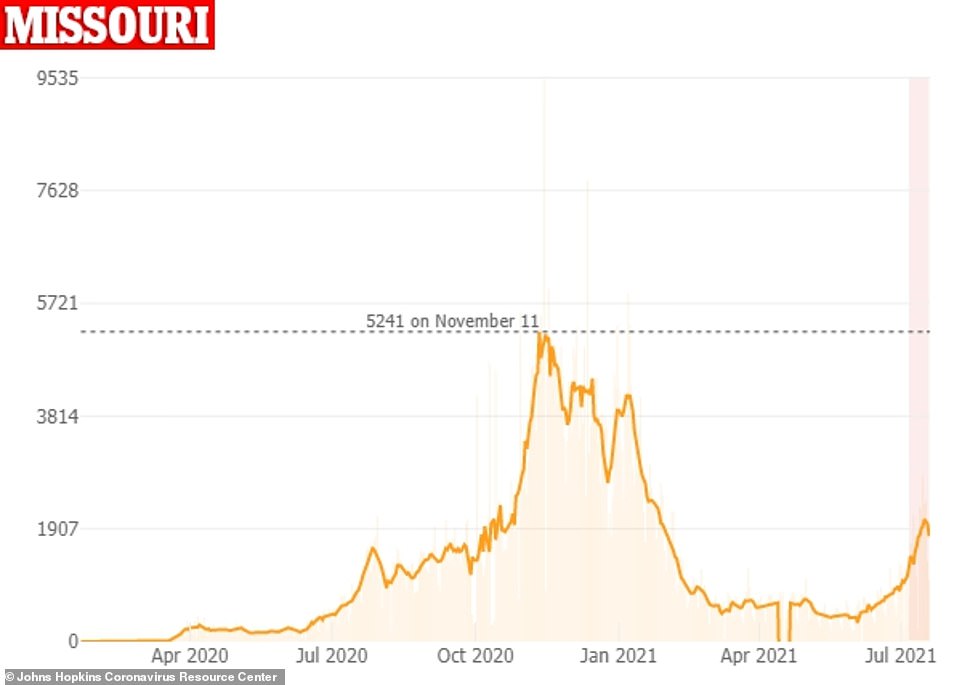 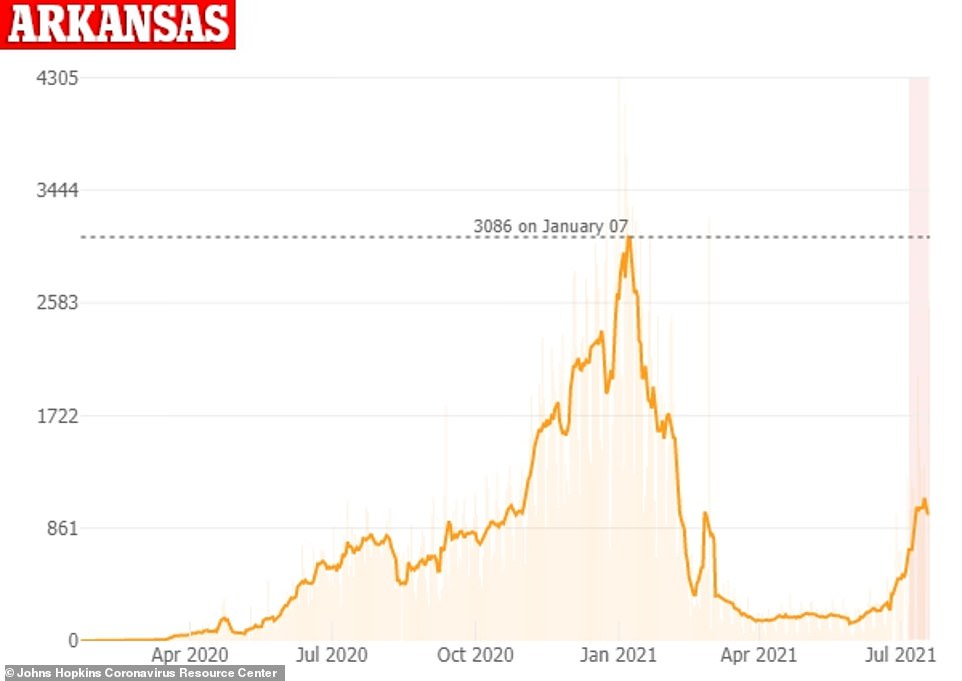 In Arkansas, cases have jumped from an average of 602 per day two weeks ago to 974 per day on Monday, an increase of 61 % 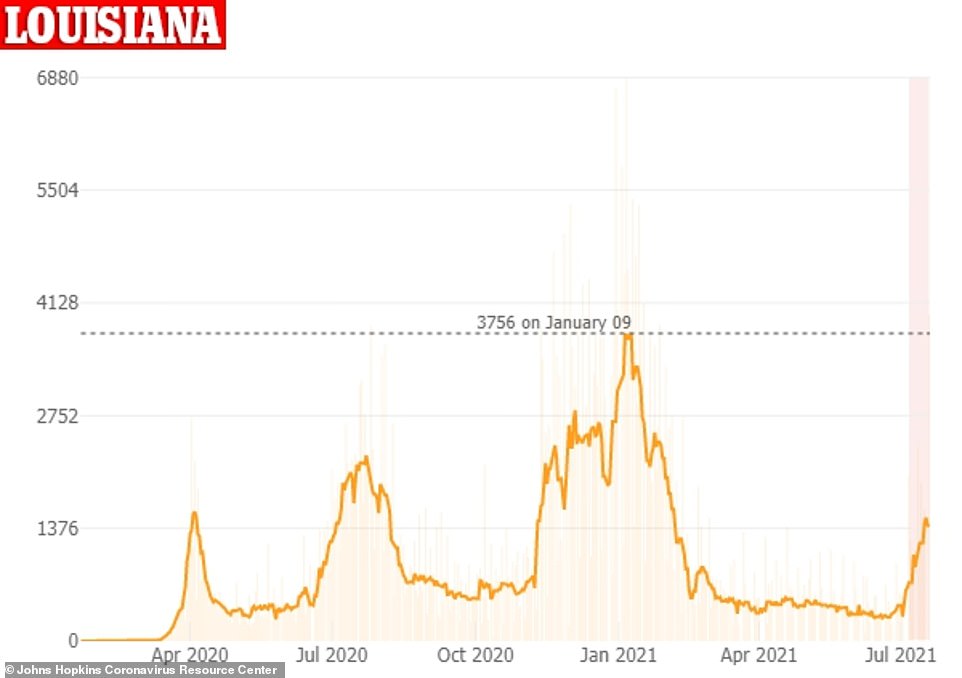 In nearby Arkansas, cases have risen from an average of 602 per day two weeks ago to 974 per day on Monday, a 61 percent increase, the DailyMail.com analysis found.

Arkansas has one of the worst vaccination rates in the country with only 35.4 percent of residents fully vaccinated, CDC data show.

The University of Arkansas for Medical Sciences, the largest hospital in the state, told CBS News that all 23 COVID-19 beds are full with 56 patients in total, some of whom have to be housed in other wings.

‘To put it into perspective, our team is in the fourth quarter right now, or maybe even double overtime,’ Dr Cam Patterson, chancellor of the medical center, told the network.

‘This is not the first quarter for this team. They’re tired. It’s tough.’ 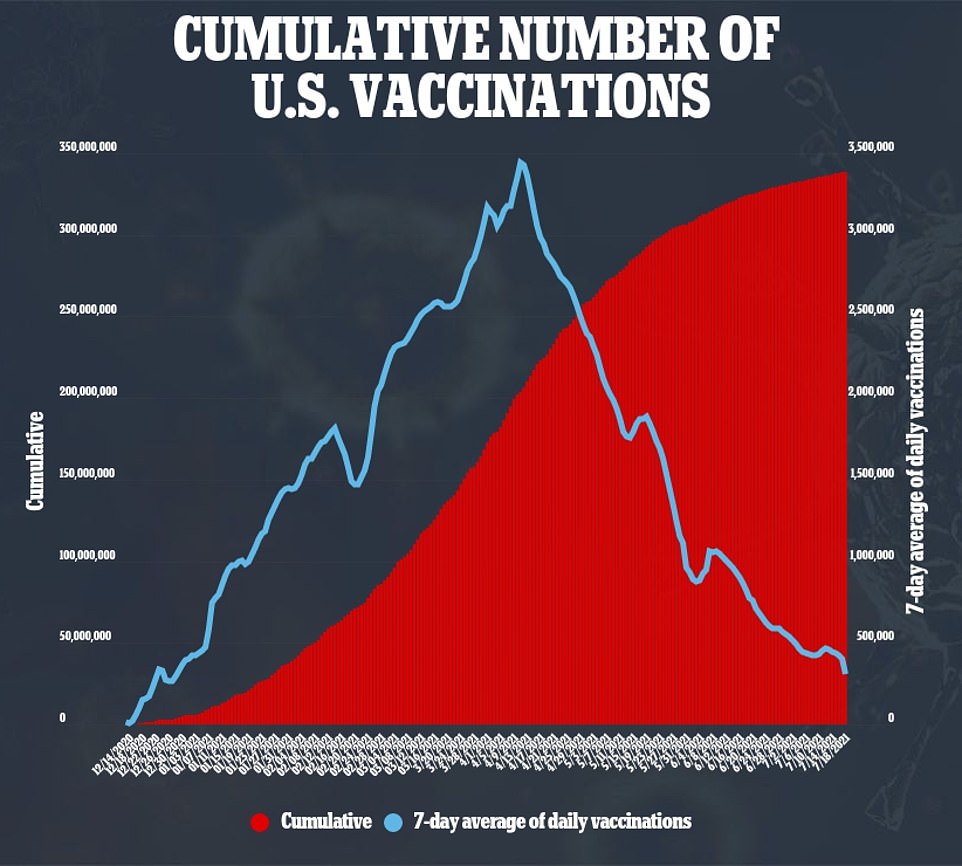 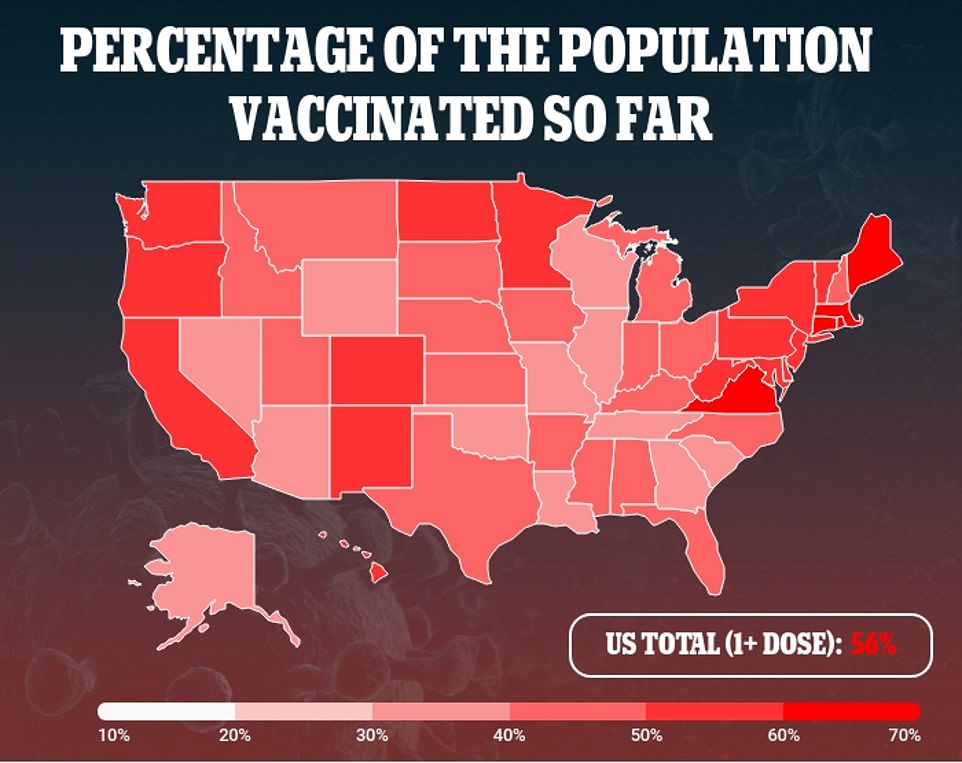 Louisiana has one of the lowest COVID-19 vaccination rates of the country with about 36 percent fully vaccinated, CDC data show.

Hospitals across the state are seeing a surge of patients with 711 hospitalized with the virus as of Monday, according to the Department of Health, which is the highest number seen since mid-February.

Dr Catherine O’Neal, chief medical officer of Our Lady of the Lake Regional Medical Center in Baton Rouge, the state’s biggest hospital, told The Advocate that 30 new patients were admitted on Saturday night.

The hospital had to open an entirely new floor for COVID-19 patients, most of whom were under age 65 and not fully vaccinated.

‘I want to be clear after seeing what I’ve seen the past two weeks,’ O’Neal said at a news conference on Friday.

‘We only have two choices: we are either going to get vaccinated and end the pandemic. Or we are going to accept death. A lot of it, this surge, and another surge, and possibly another variant.’ 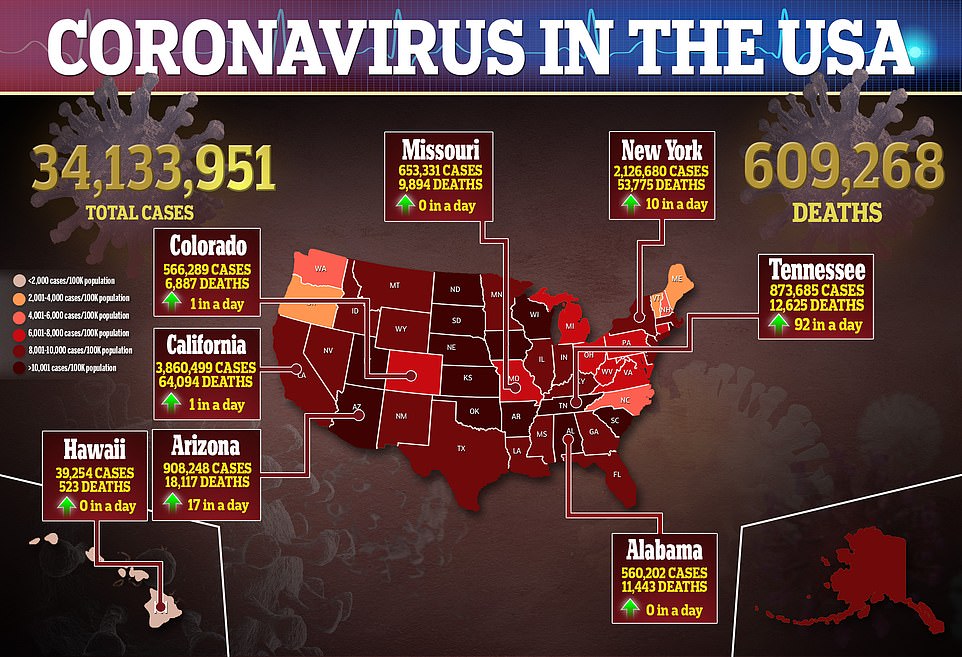 By Rachel Sharp for DailyMail.com

The U.s. is at risk of slipping backwards in its fight against COVID-19 as the Indian ‘Delta’ variant has become the dominant strain and appears to be on track to make up every new case in New York City by next month.

The spread of the highly contagious strain, which originated in India, has already pushed new infections up to 26,306 nationwide, an increase of 69.3 percent on a seven-day moving average compared to one week earlier.

Nearly every state witnessed a rise in infections in the last week and CDC data shows the Delta variant is responsible for about 60 percent of these cases.

CDC Director Dr Rochelle Walensky warned that the current outbreak is becoming ‘a pandemic of the unvaccinated’ as most cases, hospitalizations and deaths are among people yet to take the shot while the nation’s vaccination rollout has stalled.

Fears are now mounting that the worst is yet to come as America looks to the United Kingdom, which is several weeks ahead in its battle against the Delta variant and is grappling with daily infections doubling within the space of a week.

Based on the rate with which the strain became dominant in the UK, then made up 100 percent of cases and set off a dramatic spike in cases and deaths, the US may well be just weeks away from reaching a similar crisis point.

New York City, which last year was the virus epicenter of the world, could see cases accelerate six-fold and deaths multiply by seven between now and the end of August if the spread of the variant mirrors that on the other side of the pond. 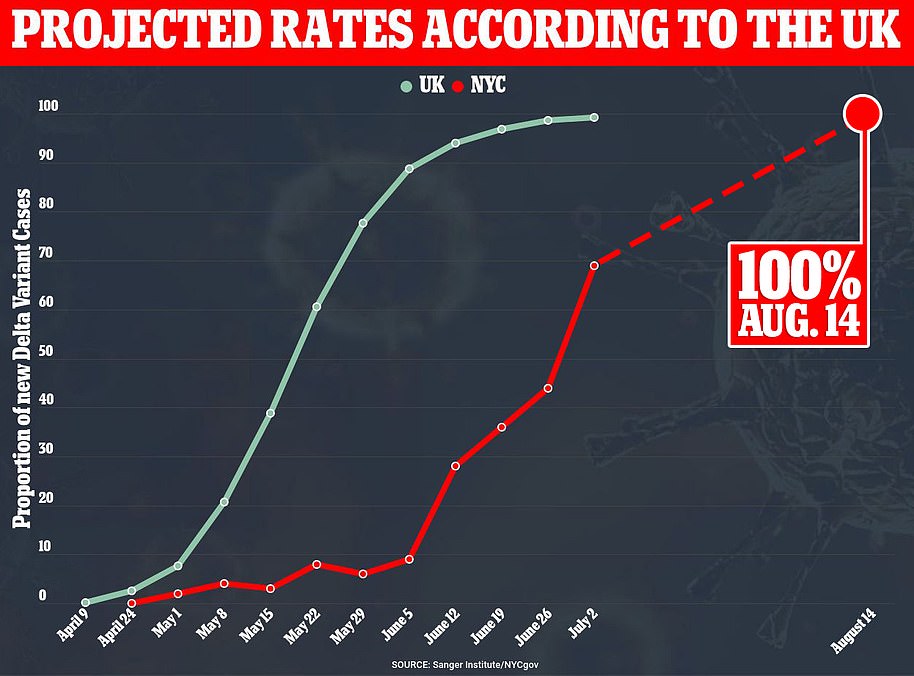 Delta spread quickly throughout the UK and had become the dominant strain by May 21, when 60.6 percent of all new cases in the two weeks preceding it were identified as the B1.617.2 variant.

Just six weeks later, on the week ending July 2, 100 percent of all UK cases were the Delta variant.

New York City has a lag on the UK when it comes to the prevalence of the strain.

It became dominant by the week ending July 3, accounting for 69 percent of all new cases just as people jetted in and out of the city for the July 4 weekend.

This means if New York City follows the same pattern as the UK, the Big Apple is on track for the Delta strain to make up 100 percent of all new cases by August 14.

And this threatens to set off a new wave of the virus, just one month after New York state lifted all remaining coronavirus restrictions in June.

The spread of the Delta variant sent cases and deaths surging once again in the UK and plunged the country into yet another lockdown. 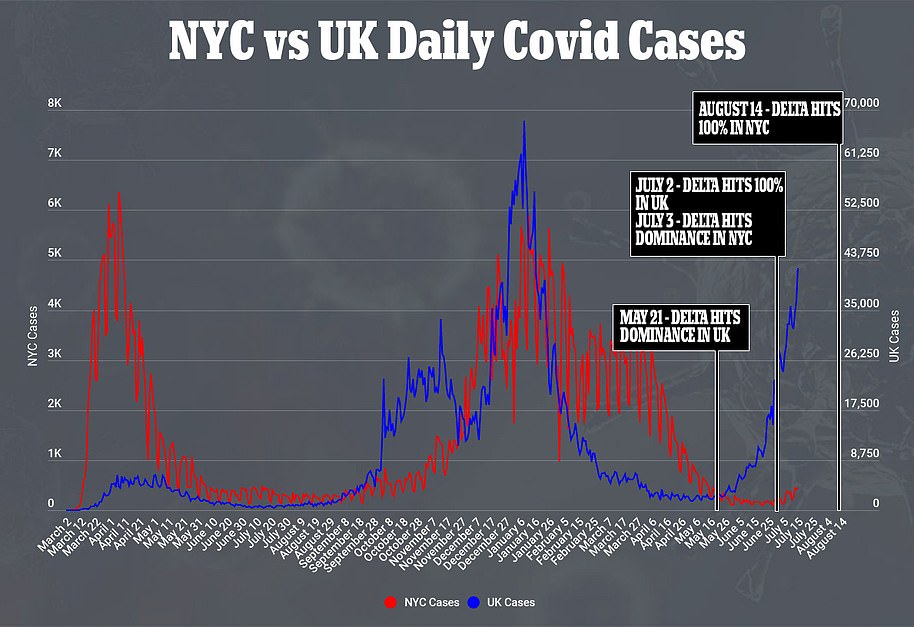 As the number of U.K. cases shoots higher with the Indian Delta COVID variant taking hold, New York City cases also are beginning to move higher – and they threaten to spike just as the U.K.’s numbers have as the Delta variant becomes an increasing share of the city’s infections