A new coronavirus variant that originated in Colombia has been detected in South Florida.

Variant B.1.621 has yet to receive a Greek letter designation from the World Health Organization (WHO), but it is starting to make an impact in Miami.

Carlos Miyoga, CEO of Jackson Health System in Miami, told Local 10 that the strain accounts for around 10 percent of cases in the area.

Health experts suspect that constant travel between Miami and Colombia caused the variant to travel in the state and are urging residents to get vaccinated.

Jackson Health System CEO Carlon Miyoga told Local 10 that his health system is seeing an increase of cases of the B.1.621 variant, which originated in Columbia 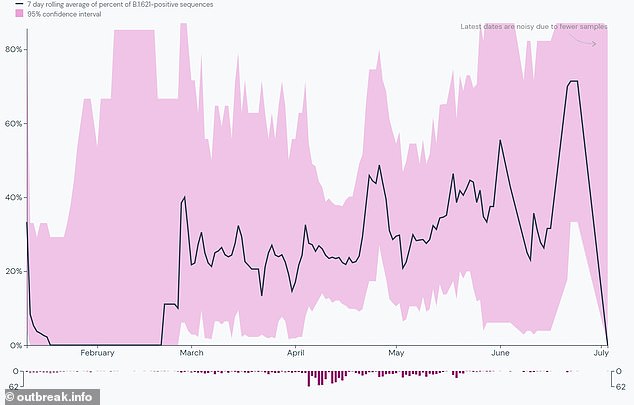 B.1.621 reached its peak in Columbia in late June, when it accounted for 70 percent of cases in the South American nation (above)

The variant was first discovered in January in the Colombia, where, at its peak in late June, it accounted for around 70 percent of cases.

It has since also been traced to 28 other countries, according to outbreak.info.

The European Centre for Disease Control and Prevention listed B.1.621 as a variant of interest.

Variants that are named often have some sort of quality that makes them unique from other strains of the virus.

The Indian ‘Delta’ variant, for example, is highly contagious, earning its own designation.

As of now, experts are unsure of any unique qualities the unnamed variant could have.

‘The only time it becomes important is if it gives virus selective advantage, which we’ve seen with delta variant,’ John Sellick, a biomedical sciences professor at the University of Buffalo, told The Washington Post.

Cases of the variant are still barely registering nationally, and they still account for a small portion of Florida’s total COVID-19 outbreak as well.

The variant did cross the one percent of total cases threshold for the first time this month, though. 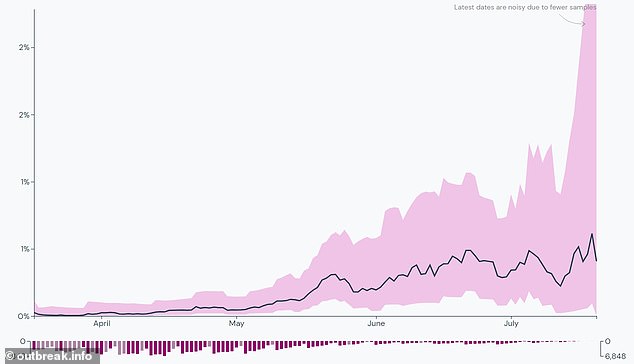 The B.1.621 variant eclipsed 1% of total cases in America for the first time recently (above) 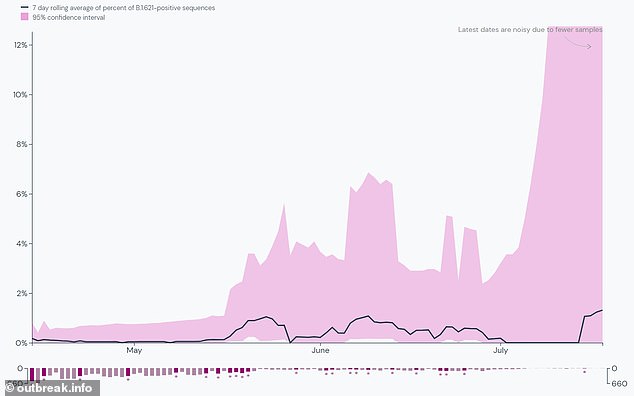 Cases of B.1.621 are still low in Florida, though they are rising in recent days after sitting at zero for nearly a month (above)

Some fear it could explode in the coming weeks around the country, as many visit Florida over the summer, then return back to their home community carrying the variant.

‘If you have a lot of unvaccinated people gathering and then they’re going back home, you could have very rapid transmission in few weeks,’ Dr Preeti Malani, chief health officer of the Division of Infectious Diseases at the University of Michigan, told The Post.

Another variant, the Delta variant, is currently causing a massive outbreak in the state of Florida.

Day-to-day COVID data in Florida is not longer reported, after Gov Ron DeSantis declared the pandemic defeated in May.

In the time since the pandemic was ‘defeated’ cases have exploded in the Sunshine state. 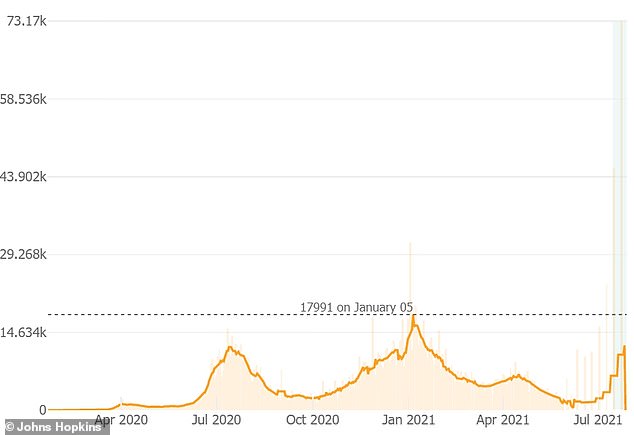 Florida is experiencing a COVID surge, though Gov Ron DeSantis stopped the state from reporting daily virus data in May

Data from the White House found that the state accounted for 20 percent of active cases in the nation at some point two weeks ago.

Most recent data show the state is averaging more than 13,500 cases a day, more than double the 5,000 case per day figure recorded only two weeks ago.

Florida has a higher vaccination rate than many of its peers going through similar outbreaks, with 57 percent of the population having received at least one shot of a COVID-19 vaccine.

In Miami-Dade county it is even better, as 74 percent of residents are at least partially vaccinated.