The embattled second-year pro was suspended after he was allegedly violated the NFL’s personal conduct policy.

The NFL suspended Elliott in early August after a year-long investigation concluded he used physical force against ex-girlfriend Tiffany Thompson prior to his rookie season in the summer of 2016.

However, Elliott denied the allegations under oath during the appeal hearing, according to a separate lawsuit filed by the NFL players’ union against the NFL and commissioner Roger Goodell in hopes of vacating that suspension. 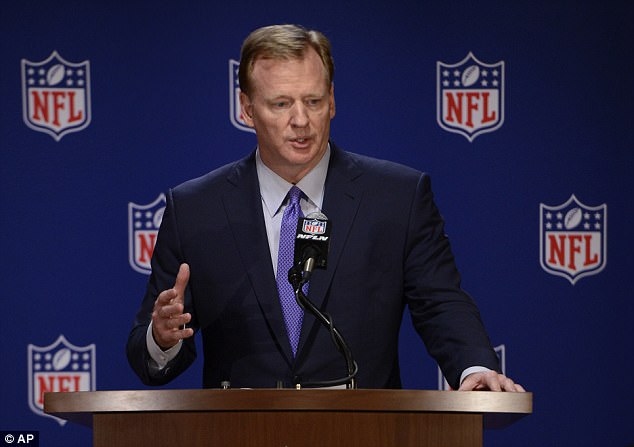 NFL commissioner Roger Goodell was named in a lawsuit filed by the players’ union, which alleges that he and other league executives hid information that was favorable to Elliott’s case

However, Henderson’s ruling came after the NFL decided to allow Elliott to play in Sunday’s opener against the New York Giants because the arbitrator’s ruling was expected to come so late in the week before a regular-season game.

Regardless of Mazzant’s ruling on the temporary restraining order, Elliott’s attorneys were clear that their client intended to continue to fight the league’s suspension.

“Mr. Elliott is looking forward to having his day in federal court where the playing field will be level and the NFL will have to answer for its unfair and unjust practices,” read a statement from his attorneys on Tuesday.

The NFL players union’s lawsuit against the league and Goodell was filed in federal court in Texas, and claimed the league’s appeal process was ‘fundamentally unfair’ since Henderson denied a request to have Thompson testify at Elliott’s appeal hearing.

That filing also claimed that Goodell and other league executives hid information that was favorable to Elliott’s case.

‘In what may mark one of the most fundamentally unfair arbitral processes conceivable, Elliott and the Union were subjected to an arbitration process in which, among other things, there was a League-orchestrated conspiracy by senior NFL executives, including NFL Senior Vice President and Special Counsel for Investigations Lisa Friel, to hide critical information—which would completely exonerate Elliott,’ read the NFLPA’s petition.

The lawsuit accuses Friel of withholding from Goodell the word of co-lead investigator Kia Roberts, who the suit says concluded that the accuser wasn’t credible and that discipline wasn’t warranted. 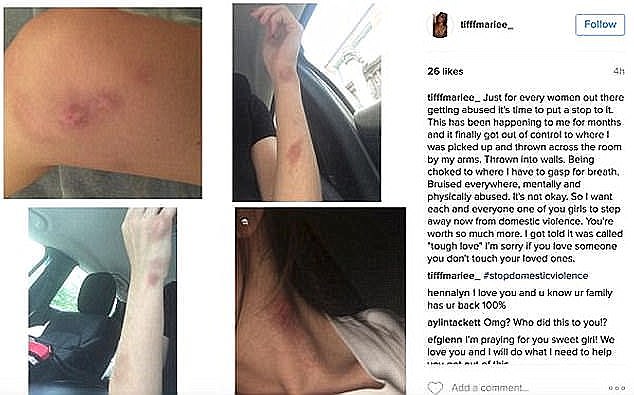 Thompson posted photographs to Instagram, claiming they were caused from physical abuse by her ex-boyfriend Elliott 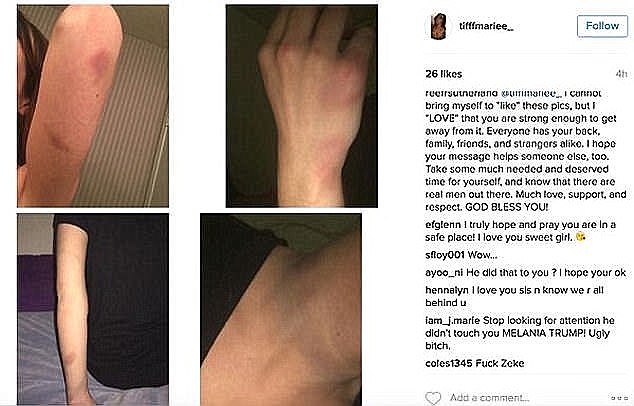 ‘The withholding of this critical information from the disciplinary process was a momentous denial of the fundamental fairness required in every arbitration and, of course, does not satisfy federal labor law’s minimal due process requirements,’ the filing read, according to the Associated Press.

The NFL had medical experts examine photos of bruising that was allegedly caused by Elliott, but the lawsuit claimed that the doctors questioned could not definitively rule that the injuries were caused by domestic violence.

According to Elliott, Thompson intended to ‘ruin’ his life after he tried to break up with her, as reported by The Fort Worth Star-Telegram.

‘You are a black male athlete,’ Elliott claimed Thompson told him, according to the report. ‘I’m a white girl. They are not going to believe you.’

The NFL has faced criticism for its handling of domestic violence issues in recent years. Most notably, in 2014, Baltimore Ravens running back Ray Rice was arrested for striking his then-fiancee, Janay Palmer, in an Atlantic City casino. Elliott will play against the Giants in Week 1, but could ultimately serve a six-game suspension for violating the NFL’s personal conduct policy

Rice was suspended only two games at the time, even after TMZ released video of him dragging his unconscious former fiancee and current wife out of an elevator.

Goodell would later admit that he ‘didn’t get it right’ and after a second video emerged depicting Rice striking Palmer inside the elevator, the Ravens released the running back and he was suspended indefinitely.

Charges against Rice were dropped after the former Rutgers star agreed to court-supervised counselling.

In response, the NFL has since stiffened its penalties for domestic violence. Now NFL employees face ‘a baseline suspension of six games without pay for violations involving assault, battery, domestic violence, dating violence, child abuse, other forms of family violence, or sexual assault, with consideration given to possible mitigating or aggravating circumstances.’