A sixth form head has angered schoolgirls by telling them periods aren’t an excuse to take time off because ‘learning to deal with monthly inconvenience is all part of being a woman’.

Girls at Oxford Spires Academy were sent an email by head of sixth form and vice principal Jackie Watson – saying time of the month is not an excuse not to attend class.

The message was sent to all Year 12 students at the school in Cowley, Hillingdon, after girls were calling in sick when on their period.

The email, designed to cut back on non-attendance, told students that ‘learning to deal with monthly inconvenience is all part of being a woman’.

But the email has been hit with a backlash by some students and parents.

One student said: ‘Obviously I have to understand that people cannot take their whole period off each month but that is not what anyone is trying to do.

‘Personally, when I am on my period, I experience really painful cramps, meaning I cannot walk without having to be bent double.

‘Sometimes, I get so dizzy I pass out or vomit – obviously on these days, I would not consider myself fit to go into school.

‘The fact Dr Watson sent the email out to the whole of sixth form as well, including the boys, is just making boys think it isn’t bad and that they shouldn’t be sympathetic.’

‘I am now quite uncomfortable to think of my next periods and how I will manage them at school, as I’m sure the majority of girls are.’

The email sent out by Dr Watson urged students not to miss out on their education and reminded pupils.

It pointed out painkillers and even heat packs are available from the school matron. 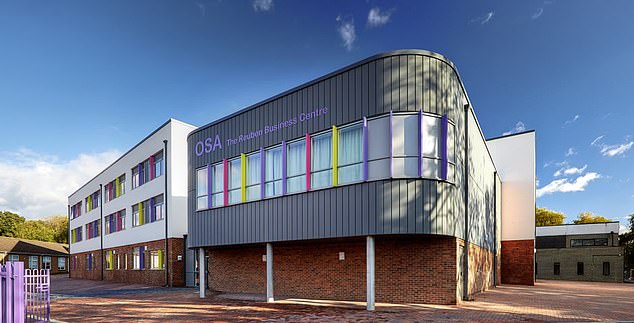 The message was sent to all Year 12 students at the school (pictured) in Cowley, Hillingdon, after girls were calling in sick when on their period

It said: ‘Any female student asking to be sent home ‘ill’ or phoning in ‘ill’ who has a period will not find this is a suitable excuse.

‘Learning to deal with monthly inconvenience is all part of being a woman, I’m afraid.’

Another student responded to Dr Watson’s email saying: ‘Obviously as women, we must find ways of dealing with this, but occasionally, the pain is too much to handle.

‘We understand the motive behind the email, and we don’t want to use our periods as a way to prevent our learning but we feel there is a lack of compassion for what girls experience each month.’

Dr Watson stressed her email was not intended to address the worst case scenarios.

She said: ‘Anywhere where you work you can’t take two days off for being on your period.

‘If it’s just an ordinary period, you should come into school – unfortunately taking that time off is not how society works.

‘The email is about attendance, that was simply the point – my slightly tongue-in-cheek way of saying it maybe got to some of the girls, but the email was to get across the message to be in school.’

Dr Watson admitted that was a mistake to send the email to boys too.

She said: ‘I do think they’re right to be upset about that [the email being sent to boys] and I probably shouldn’t have done that and perhaps it was a bit foolish of me.

Dr Watson reiterated that painkillers and heat packs are available at the school for girls suffering from period pain.

She said the school spends ‘a huge amount of time supporting students with issues and health-related matters’.

One posted: ‘It’s particularly sad when a professional woman demonstrates a lack of empathy for young women who experience especially heavy bleeding or pain.

‘For girls who experience flooding in the first few days, bleeding through their clothes, despite ‘doubling up’ with a tampon and towel together, is mortifying, especially in a mixed school.

‘I’m afraid this teacher’s email is ill-considered and totally devoid of empathy for the minority of girls who need to take time off. She’s clearly one of the lucky ones.’

One mother, commenting on Facebook said: ‘My daughter used to vomit, pass out and have seizures. Some months she couldn’t even stand up for two or three days.

‘Not everyone is the same! I am sure there are other ways of managing attendance numbers!’

Another comment labelled the email ‘insensitive’, calling for it’s sender to ‘retire’.

One comment however clearly saw no issue, simply stating the words ‘snowflake society.

Another said: ‘Dr Watson? What did she get her doctorate in?

‘How to upset people and be a total pain, this woman owes those kids an apology, she should sling her hook.’