The Labour leader unveiled radical proposals to nationalise the part of BT that provides broadband – and to fund the free service by imposing huge taxes on online giants.

But the pledge was savaged by BT, which said it would cost five times more than Labour’s £20billion estimate. Boris Johnson described the plans as ‘crackpot’ and derided it as a ‘crazed communist scheme’. After the Labour announcement, £715million was wiped off the value of BT at one stage.

She said: ‘If Labour decide to confiscate the parts of the company that have the best growth prospects, then the share price will be hit – meaning people’s pensions will lose money and they will be poorer in retirement because part of their investment for the future has been taken away.

‘A Labour government is likely to lead to significant falls in the share price of a number of leading companies.’ Labour’s plan includes nationalising parts of BT – namely its digital network arm Openreach – to create a UK-wide network owned by the government called British Broadband.

Shadow Chancellor John McDonnell said the broadband rollout would begin with communities that have the worst access, followed by towns and smaller centres, and then by areas that are currently well served. 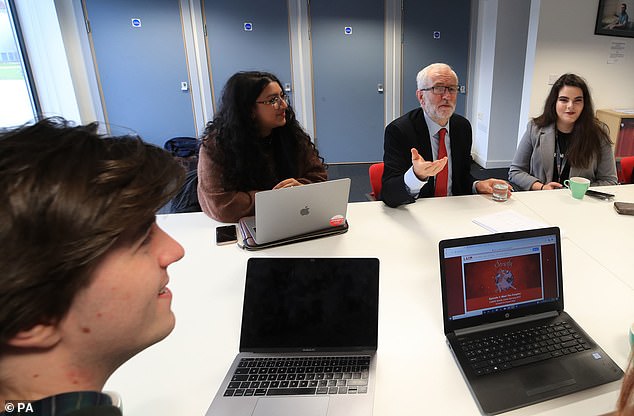 And he even suggested that smaller broadband providers – Virgin, Sky and Talk Talk – could be nationalised. Yesterday Talk Talk put the sale of its full-fibre broadband business on hold.

Launching the policy at Lancaster University yesterday, Mr Corbyn vowed to provide free internet coverage to the public ‘who have already forked out far too much for rip-off broadband’. He said Labour would fund this by forcing internet giants such as Google and Facebook to pay more tax.

HOW THE ANALYSTS SAVAGED HIS PLAN

‘It needs funding, it is very big numbers. You are not short of [it costing] £100billion’ – BT chief executive Philip Jansen

‘To bring internet provision into the state’s remit would ensure all of the delays, waiting times and quality decline that go hand-in-hand with bureaucracy’ – Mark Littlewood, director general of the Institute of Economic Affairs

‘All renationalisation will achieve is to slow down a process that needs speeding up’ – Matthew Fell, policy director, Confederation of British Industry

‘Labour’s plan will be turning back the clock to a time when Britons had to wait months for a phone line connection from the Post Office’ – Matthew Lesh, of the Adam Smith Institute

Mr Corbyn added: ‘The corporations have been unable or unwilling to roll out full-fibre fast enough, and they have little incentive to invest in rural and remote parts of Britain.

‘But under our plan, the priority will be those with least connectivity, mainly in rural and remote areas but also in some inner-city areas, unlocking new opportunities across huge swathes of our country.’

Mr McDonnell said: ‘British Broadband will not represent a return to the 1970s in how it operates. They didn’t have broadband in the 1970s, this is public ownership for the future.’

‘It needs funding, it is very big numbers, so we are talking £30 billion to £40 billion, and if you are giving it away over an eight-year timeframe it is a another £30 billion or £40 billion. You are not short of £100 billion.’

Mark Littlewood, director general of the Institute of Economic Affairs, said: ‘The expansion of cheap internet services is one of the great free market success stories of recent years.

‘To bring internet provision into the state’s remit would ensure all of the delays, waiting times and quality decline that go hand-in-hand with bureaucracy.’

Neil Wilson, chief market analyst at Markets.com, said: ‘BT can now be added to the list of “Labour Danger” stocks which includes utilities and Royal Mail.

‘Of course, all UK stocks are in the firing line, because of plans to hand shares to workers.’ A telecoms industry source suggested Labour’s plan could also threaten jobs at BT’s rivals. 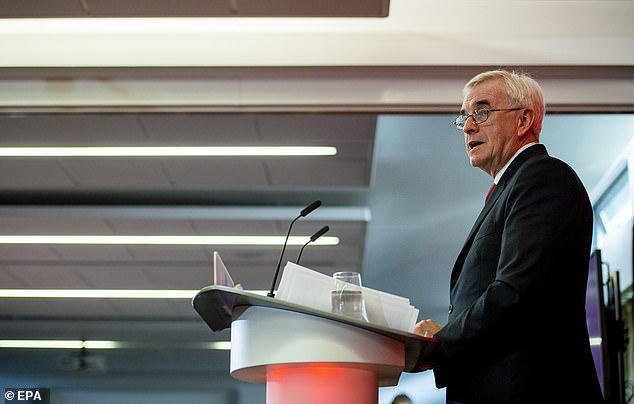 Shadow Chancellor John McDonnell said the broadband rollout would begin with communities that have the worst access, followed by towns and smaller centres

‘There are thousands of people working in the cables industry who aren’t engineers,’ the source said.

Liberal Democrat home affairs spokesman Christine Jardine said: ‘Given Corbyn’s admiration for authoritarian regimes like Iran and Cuba that routinely spy on their citizens online, there are legitimate concerns about handing over control of our broadband services to a Labour government. This could lead to a snoopers’ charter through the back door. People will be rightly worried about letting Corbyn’s Labour into their living rooms.’

What is Labour up to?

Labour says it will nationalise Openreach, the part of BT that runs most of Britain’s broadband network, and provide all homes and businesses with free internet.

The party says it will borrow £15billion, on top of £5billion already committed by the Government, and use it to subsidise the rollout of fibre-optic cables nationwide by 2030.Labour proposes to compensate BT shareholders by paying them with government bonds – effectively IOUs that pay interest.

Openreach has expanded its fibre rollout in the past two years, but critics have long accused it of moving too slowly.

Labour says it will cost an extra £15 billion, which it plans to borrow. But it may end up having to pay the same amount again for Openreach, with the party saying Parliament would decide the final amount paid to BT shareholders.

Any investors who feel they could be left out of pocket might decide to take a Labour government to court. Philip Jansen, BT’s boss, said the plan could easily end up costing £100 billion in total.

Labour also claims broadband maintenance would cost only £230million a year. But City analysts put the real cost at up to £900million.

BT has more than 800,000 retail investors – many of whom would have snapped up shares following BT’s privatisation by Margaret Thatcher’s government. If Labour does not pay the full market value of Openreach, shareholders with a stake in the company could be left out of pocket.

Any falls in BT’s share price will hurt them as well – as much as £715million was wiped off the firm’s value at one point yesterday. BT’s share price is now below £2 – compared to a peak of more than £5 in 2015.

BT is a FTSE 100 company, meaning most big pension funds have cash invested in it on behalf of millions of workers and pensioners. A huge number of so-called tracker funds that follow the FTSE will also hold shares. All of these investment funds – and the retirement plans they help support – could lose out if BT’s shares fall or if Labour does not pay a fair price.

City analysts have also warned that BT may no longer be able to afford its £1.5billion annual dividend to shareholders if Openreach is nationalised. BT’s own pension pot would also be affected. The £58billion retirement scheme currently has a £6billion deficit, which the company has agreed to pay down by 2030. This means a Labour government could face a compensation claim if its nationalisation plan threatens efforts to eliminate the deficit.

Yes. In 2009, Australia’s National Broadband Network aimed to give 93 per cent of the population so-called ‘gigabit’ connections – a similar speed to what Labour wants to deliver. But the vast project has suffered from a litany of complaints. It was originally forecast to cost £29billion, but that has ballooned to £40billion.