Craig Brown on yet another biography of Wallis Simpson

Wallis In Love: The Untold True Passion Of The Duchess Of Windsor

Beware any book with the word ‘Untold’ in its title. Invariably, it really means either ‘told countless times’ or ‘untrue’.

Andrew Morton’s new biography of the Duchess of Windsor is a bit of both. Most of the story has been told before, and the few ‘untold’ bits are pretty dodgy, to say the least.

New books about the Duchess are published every year. Along with books about Adolf Hitler, baking, dieting, the Loch Ness monster, The Beatles and the assassination of J F K, they are guaranteed to sell.

Personally, I don’t mind how many times I hear the tale of how the temptress from Baltimore managed to steal the heart of a King. It has become so much part of our national landscape that I wouldn’t be surprised if one day it achieved pantomime status, part Cinderella, part Mother Goose. I wonder whether Heather Mills McCartney might be prevailed upon to take the role of the Duchess of Windsor? My only sadness is that the late Charles Hawtrey is unavailable to play the Duke. 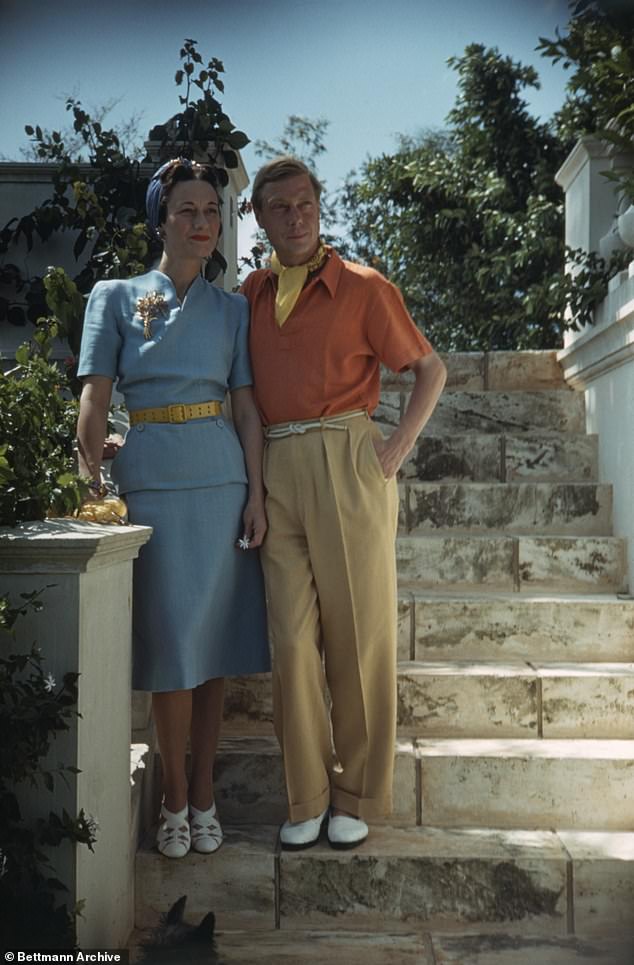 Morton, no slave to understatement, introduces the book with the words: ‘This is the story of a most extraordinary woman who, single-handed, changed the history of the British Royal Family and arguably the destiny of the British people.’

Bessie Wallis Warfield was brought up in Baltimore. Her father died when she was still a baby, so mother and child were forced to rely on the charity of wealthy Uncle Sol, who, Morton assures us, was ‘known as Mr Baltimore’.

From an early age, she seems to have developed a nose for high-living. As a child, she named her two dolls Mrs Astor and Mrs Vanderbilt, after the two richest women of the day.

The Duchess remembered her grandmother as a fount of common sense, though, judging by her aphorisms, she seems as daft as a brush. ‘Never drink coffee: it will turn your skin yellow,’ she advised the young Bessie Wallis.

Also: ‘Never let a man kiss your hand. If you do, he’ll never ask you to marry him.’ Even if her hand remained a no-go area, other parts of her body were open for business. Morton states knowingly that Bessie Wallis ‘instinctively practised the basic techniques of seduction’, though he never spells out what they might be. Anyway, her face never turned yellow and she was soon clocking up marriages, so granny was obviously on to something. 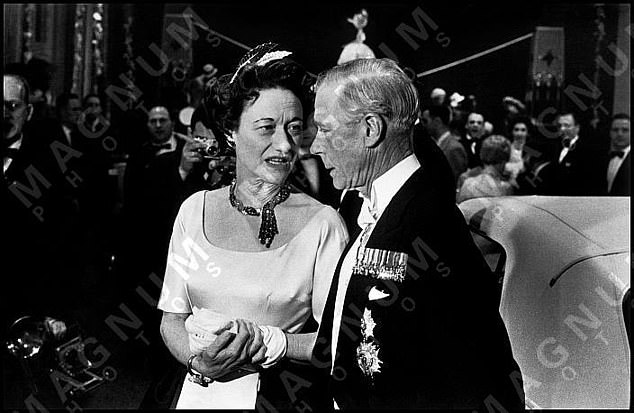 The Duchess, says Morton, was a social climber whose initial fondness for the Duke curdled, after marriage, into contempt

By the age of 20, Bessie Wallis had married a drunken airman, Earl Winfield Spencer, whom she then divorced to marry dependable Ernest Simpson, who seems to have been content to play George to her Mildred.

Before long, the Prince of Wales was head-over-heels in love. Why? She was no beauty: from certain angles she looks like Albert Steptoe. ‘What did the Prince of Wales see in the angular wife of a struggling shipping agent?’ asks Morton, adding donnishly: ‘It was a question that would exercise powerful minds for many years to come.’ There were always rumours that she was a dab hand at sexual techniques learned in the brothels of Shanghai, but Morton thinks she was more of a tease, even suggesting she successfully navigated all three of her marriages with her virginity still intact.

He suggests that she would fall in love, but resist going all the way. ‘Wallis was putty in the knowing hands of the saturnine, monocle-wearing Felipe Aja Espil,’ he observes at one point. Moreover, Espil, an Argentine diplomat, was ‘the smoothly charismatic Latin Casanova who stole – and broke – her heart’.

If the Nazis had defeated Britain, Hitler is thought to have had plans to install Edward and Mrs Simpson as puppet heads of state.

As you may have noticed, Morton leaps like a mountain goat from cliché to cliché, barely touching ground. Anecdotes are ‘well-honed’, communities ‘tight-knit’, traditions ‘time-honoured’, affairs ‘torrid’ and social whirls ‘dizzy’. He then lards this journalese with cod-Edwardian flourishes, using camply archaic words such as ‘personage’ and ‘missive’. Nevertheless, he lets the story rattle along at a fair pace, and has a nose for items of interest, including the louche and colourful characters with whom she surrounded herself.

Biographers of the Duke and Duchess of Windsor tend to side with one or the other. In recent years, there has been a shift in the Duchess’s favour, but Morton doesn’t have much time for either. The Duke, he says, was by turns ‘simpering, self-pitying and spoiled’ and ‘lonely, restless and somehow empty’. The Duchess was a social climber whose initial fondness for the Duke curdled, after marriage, into contempt. As the Duke’s biographer, Frances Donaldson, said: ‘Their ambitions ran counter from the start’: he was attracted to her because her status as a double divorcee would enable him to give up being King, and she was attracted to him precisely because he was King. Together in exile, they pursued the vapid consumer lifestyle of a toytown King and Queen, peopled by footmen in full livery serving fancy cocktails to louche lounge-lizards on the make. Their only distraction from boredom was to shop, shop, shop. ‘The highlight of his day was watching his wife buy a hat,’ observed the waspish Lady Gladwyn. What of the ‘untold true passion’ in the book’s subtitle? It turns out to be barely worth mentioning. Morton breathlessly describes chancing upon boxes of forgotten documents from the estate of Cleveland Amory, an oddball journalist who was hired by the Duchess to ghost-write her autobiography, and was then fired.

From these boxes, Morton claims to have discovered that the Duchess was secretly in love with her old friend Herman Rogers, who gave her away at her wedding to the Duke. Throughout the book, he repeats, time and time again, as if repetition increases likelihood, that Rogers was ‘the only man she ever truly loved’. He also suggests that, days before the wedding, the Duchess suggested to Rogers that they could have a child together, and pass it off as the Duke’s. 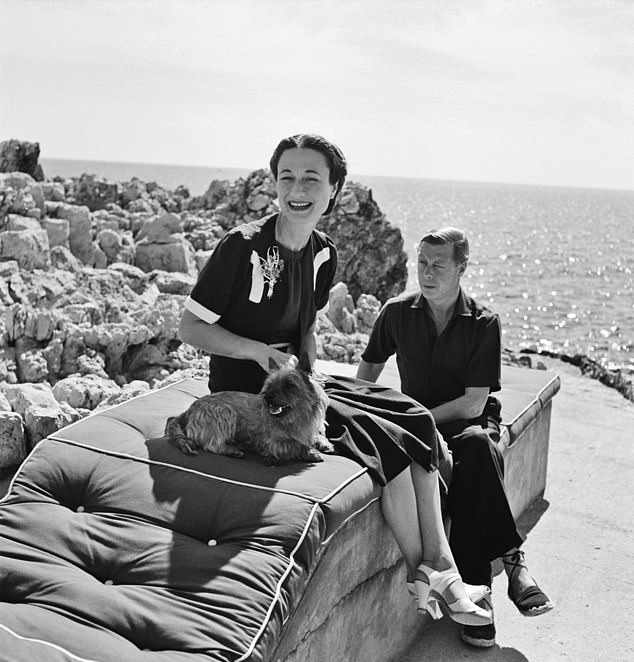 Biographers of the Duke and Duchess of Windsor tend to side with one or the other. Morton doesn’t have much time for either

But the proof is absent. First, Cleveland Amory was not to be trusted. He said he interviewed Queen Elizabeth II for the Duchess’s autobiography – a ludicrous claim that it suits Morton to accept at face value. And the note found by Morton is vague and ambiguous: ‘Two days before she married, Kat gone away, also HRH… so in middle of night – love – now in two days she would be married and it would be his child.’ If Amory had really believed in their illicit romance, he would surely have put it in his autobiography, which deals with his time as the Duchess’s ghostwriter, and which is not short of grievance.

Most of the rest of Morton’s information is third-hand, coming from Herman Rogers’s stepdaughter, who claims to have heard it from her mother, his second wife. It turns out that the second Mrs Rogers was so nutty that she had changed her Christian name to his first wife’s, and then insisted on being buried with her husband and his first wife, wearing the first wife’s dress. Small wonder that this particular tale has remained untold for so long; it is unlikely to be retold.